Categories
Area of Interest Breast ; Imaging Technique Mammography, Ultrasound
No Procedure ; No Special Focus ;
Show more Show less
Download as PDF Print Show related cases Notify admin
Clinical History
A 30-year-old lactating woman, presented with a palpable, painless right breast mass.
Imaging Findings
Medio-lateral oblique (MLO) mammogram of the right breast revealed a circumscribed lobulated mass with heterogeneous density (Fig. 1).
Ultrasound confirmed a circumscribed, hypoechogenic mass, with marked distal acoustic attenuation (Fig. 2).
Although a galactocele was a probable diagnosis in this lactating woman, the imaging findings were not conclusive or specific, as the distal acoustic attenuation of the lesion, and a malignant lesion should be excluded. Therefore, an ultrasound guided needle aspiration was performed and about 20 ml milk-like fluid was aspirated. Biochemical and cytology confirmed the diagnosis of galactocele.
Discussion
Galactocele is an uncommon breast mass, consisting of a milk-filled cyst, usually occurring in lactating women, although it has been described in children and in men [1].
Galactocele is presumed to be caused by obstruction of the mammary duct by inflammation or less frequently by a tumour.
Clinically, patients usually presents with a painless breast lump that has benign features at palpation with smooth contours and freely-mobile.
On mammography, galactocele consists of a single or multiple masses with variable density depending on the amount of fat [2]. Therefore, galactoceles can be seen as a completely radiolucent mass when the fat content is very high. When galactoceles contain variable proportions of fat and fresh milk, it can appear as a cystic mass with a characteristic sign of fat-fluid level, with the fat in the higher portion of the mass and the fresh milk in the lower and obviously this sign can only be seen on mediolateral projection (MLO), obtained with the patient upright. Although this finding can be considered pathognomonic for galactocele, it is not always present. Other possible mammographic appearance is a mass with mixed fat and water densities similar to a breast hamartoma and sometimes contains areas of calcium density.
On ultrasound, galactoceles can have multiple appearances, again depending on the amount of fluid or solid components of milk contained in the lesion. Consequently, galactoceles can be seen as a simple cystic mass, a mixed cystic-solid lesion or as a solid mass with distal acoustic attenuation, as seen in our case. The latter appearance can sometimes be confused with a malignant lesion [3].
Colour Doppler will show a lack of blood flow.
Diagnosis can be established by aspiration of milk-like fluid and results in complete resolution of the lesion [4].
Differential Diagnosis List
Galactocele
Galactocele
Benign solid tumour
Breast carcinoma
Final Diagnosis
Galactocele
References 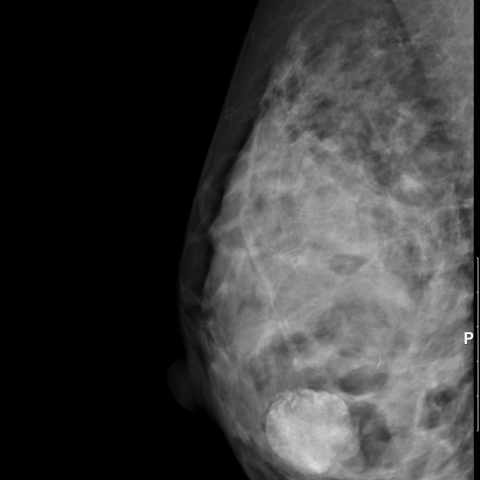 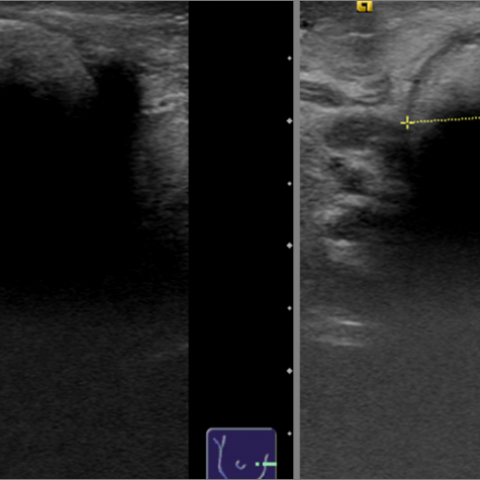 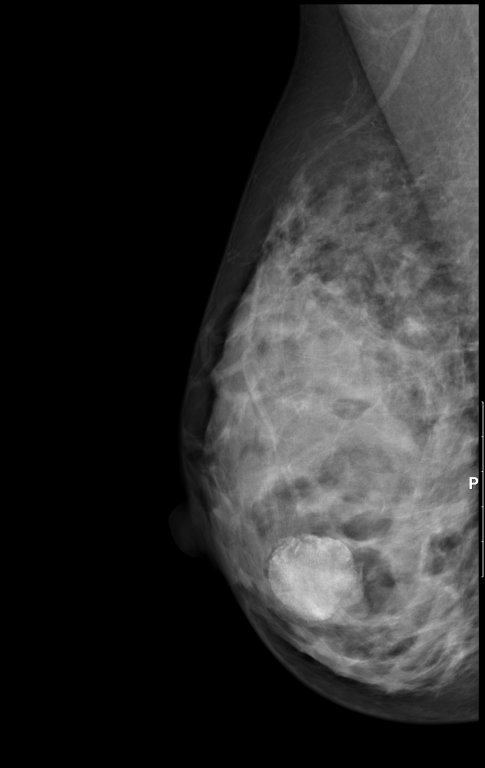