Categories
Area of Interest Head and neck, Lymph nodes ; Imaging Technique CT
Procedure Diagnostic procedure ; Special Focus Inflammation, Demineralisation-Bone ;
Show more Show less
Download as PDF Print Show related cases Notify admin
Clinical History
A 67-year-old female patient presented with hoarseness of voice and odynophagia for 3 months. She had a history of chemotherapy for Non-Hodgkin lymphoma 4 years before in another institution. She had no fever.
Indirect laryngoscopy showed diffuse laryngeal thickening.
No palpable lymph node was found in the neck.
Laboratory data were normal.
Imaging Findings
A contrast-enhanced Computed Tomography (CT) of the neck was performed. The CT showed a circumferential thickening of the oropharyngeal mucosa extending to the hypopharynx. The thickening had ill-defined margins with moderate contrast enhancement. The images also showed a diffuse thickening at the level of epiglottis and aryepiglottic folds. There was a marked narrowing of the airway. There was a heterogeneous density of the hyoid bone and thyroid cartilage with fragmentation of necrotic bone and cartilage. Mild reactive lymphadenopathy was found.
Under general anaesthesia tracheotomy and direct laryngoscopy with biopsy in periepiglottic region were undertaken.
The histology of the operated specimen revealed clumps of thin, Gram-positive, branching filaments.
The patient was put on a 3-month course of antibiotic therapy.
Discussion
Actinomycosis is an uncommon bacterial infection caused by Actimomyces israelii, an anaerobic organism. The three major clinical presentations include the cervicofacial, thoracic and abdominopelvic regions[1].
The organism, normally resident in the human mouth, is unable to penetrate healthy tissue. Primary cervicofacial actinomycosis occurs in immunocompromised patients with no head and neck lesions. The secondary form occurs after trauma, operative procedures, radiotherapy or concurrently with neoplasms.
Clinical manifestations are variable and depend on the localization. The most common clinical presentation is a fluctuant mass with a sinus tract. The different sites of the cervicofacial form include the submandibular space, cheek, parotid gland, teeth and tongue, among others[2]. The laryngeal presentation is more unusual.
The most common symptoms in laryngopharyngeal actinomycosis include hoarseness, cough and odyno/dysphagia.
About half of the patients present with a low-grade fever.
Diagnosis may be difficult because of a general lack of familiarity with the disease and a low success rate in culturing the organism. Early diagnosis is critical to initiate proper antibiotic therapy and to prevent extensive local tissue destruction. CT determined the location and extent of the lesion[2, 3].
Imaging findings are variable and can imitate other entities. In acute abscessing phase, actinomycosis may be seen as a localized mass. In the subacute stage, the most common finding is a moderately enhancing soft-tissue mass with adjacent inflammatory changes. Some lesions may cross fascial planes[2]. Some reports describe a thick walled enhancing mass with a low atenuation necrotic center[2, 3].
Owing to bacterial size, lymphatogenous spread and lymphadenopathy are rare and present only in the late stages of the disease. This helps us differentiate laryngeal actinomycosis from neoplasms.
It has been reported that actinomycosis presents as an intermediate signal intensity mass in T1 and T2 weighted MR images associated with moderate contrast enhancement[2].
The differential diagnosis includes neoplastic disorders, tuberculous lesions and mycoses[4].
The histological and microscopical diagnoses are made by the finding of sulfur granules in the specimens[2]. Culture techniques may be problematic because the cultures are usually contaminated with oral flora. So, in most cases, the final diagnosis depends on the histological examination of a biopsy specimen. The recommended treatment consists of surgery for the lesion and administration of a long course of antibiotics[5].
In conclusion, actinomycosis should be included in the differential diagnosis of a moderately enhancing soft-tissue mass associated with inflammatory reaction and infiltration of the cervicofacial region. CT allows identification of the location and extent of the lesion, aiding surgical resection.
Differential Diagnosis List
Pharingo-laryngeal actinomycosis
Malignant neoplasm
Chronic granulomatous lesion (tuberculosis)
Fungal infection
Final Diagnosis
Pharingo-laryngeal actinomycosis
References 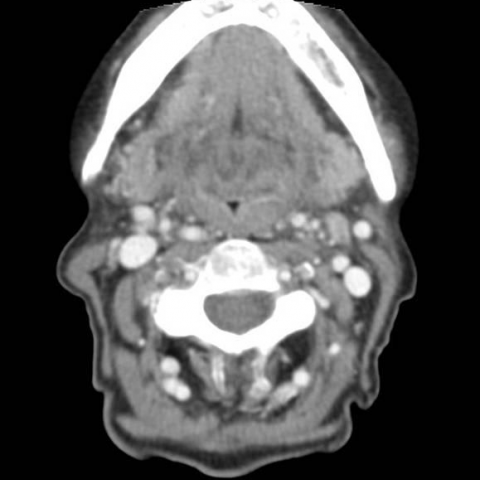 Contrast-enhanced axial CT shows a diffuse thickening of the oropharynx. There is a reduction of calibre of the airway. Mild reactive lymphadenopathy was found. 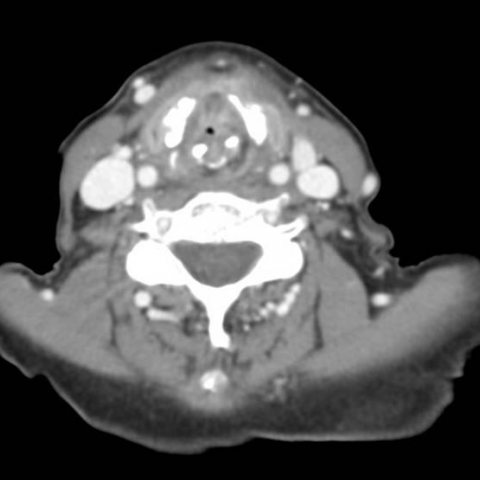 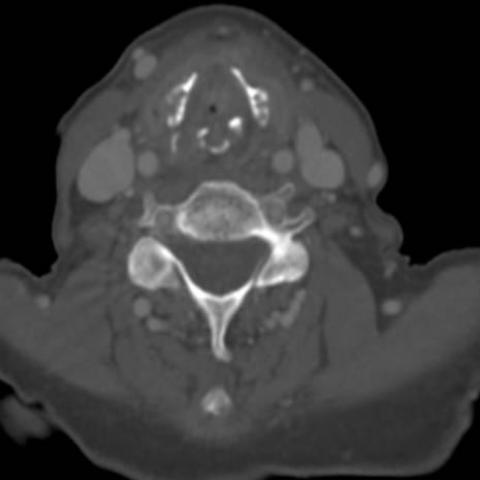 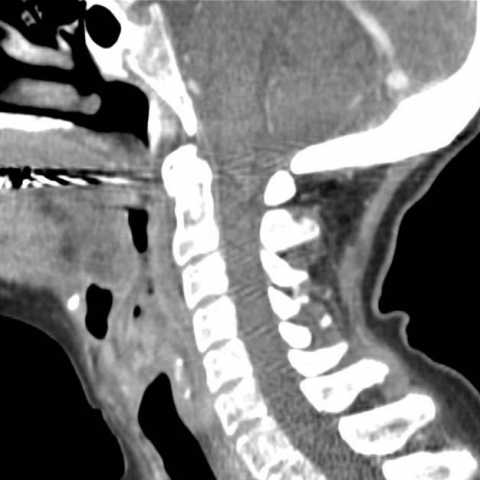 Sagittal CT shows extensive involvement of the oropharynx and hypopharynx with narrowing of the airway. 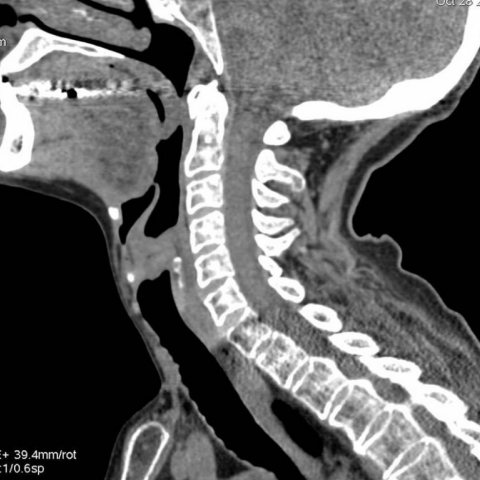 Sagittal CT after 3-month course of antibiotic therapy. The image shows a remarkable improvement with recovery of the airway calibre.
Figure 3 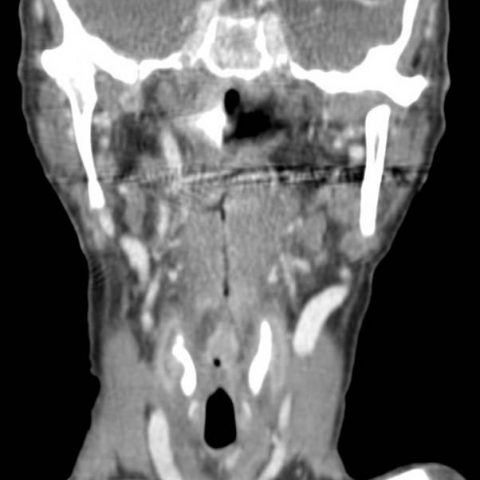 Contrast-enhanced coronal CT shows a circumferential thickening of the oropharynx, hypopharynx and larynx. There is a marked narrowing of the lumen. 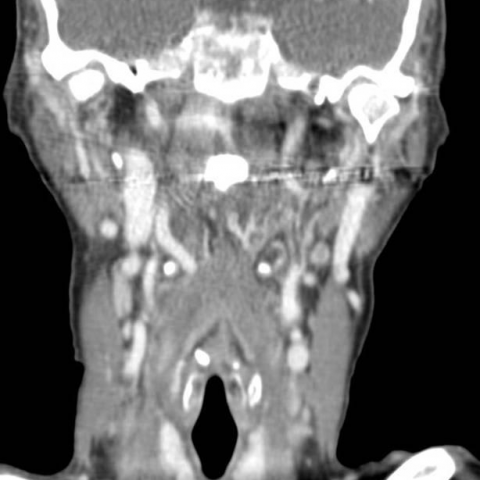 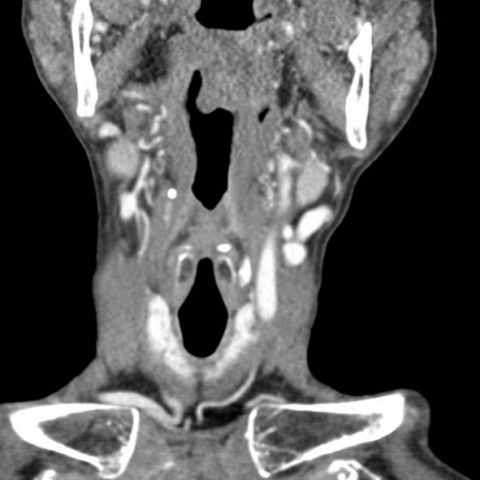 Contrast-enhanced coronal CT after 3-month course of antibiotic therapy. The image shows a remarkable improvement with recovery of the airway calibre. 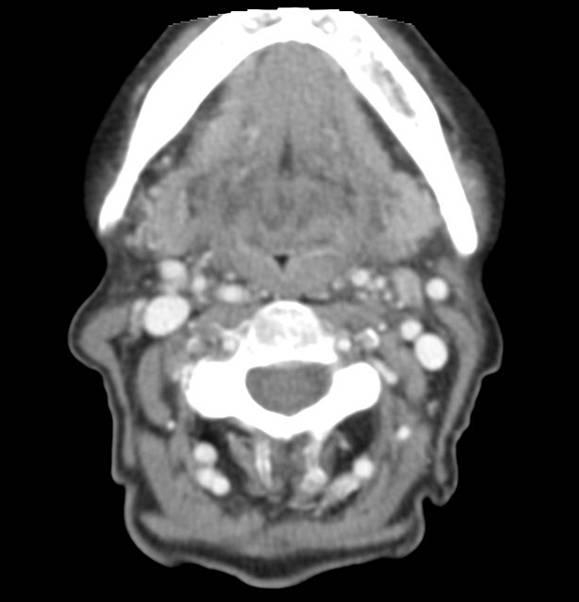 Contrast-enhanced axial CT shows a diffuse thickening of the oropharynx. There is a reduction of calibre of the airway. Mild reactive lymphadenopathy was found.
Carcacía Ivana, Servicio de Radiodiagnóstico, CHUO, Ourense, España. 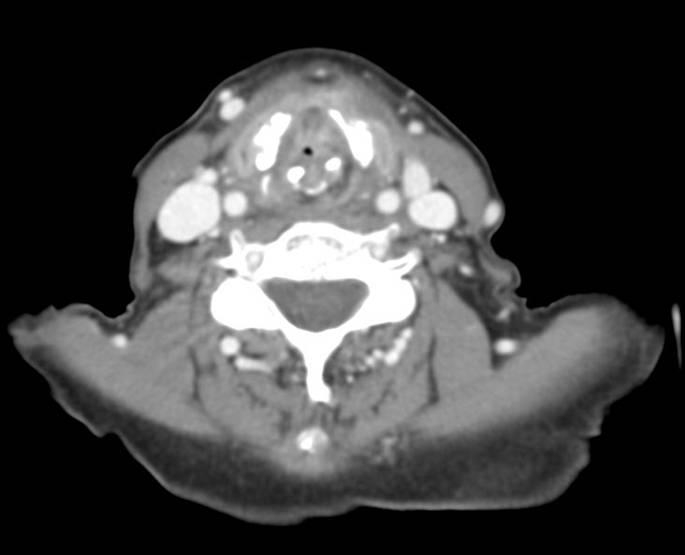 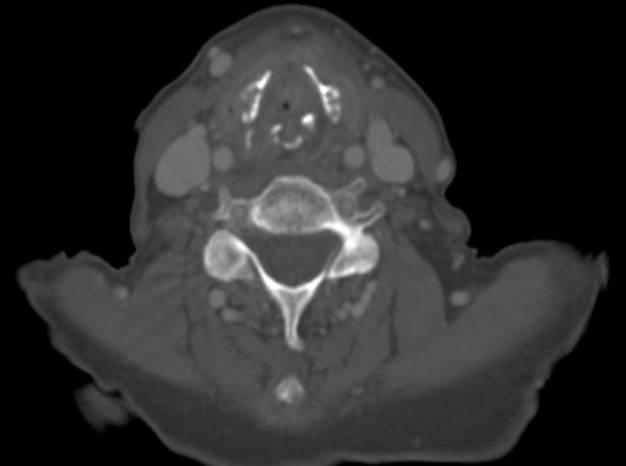 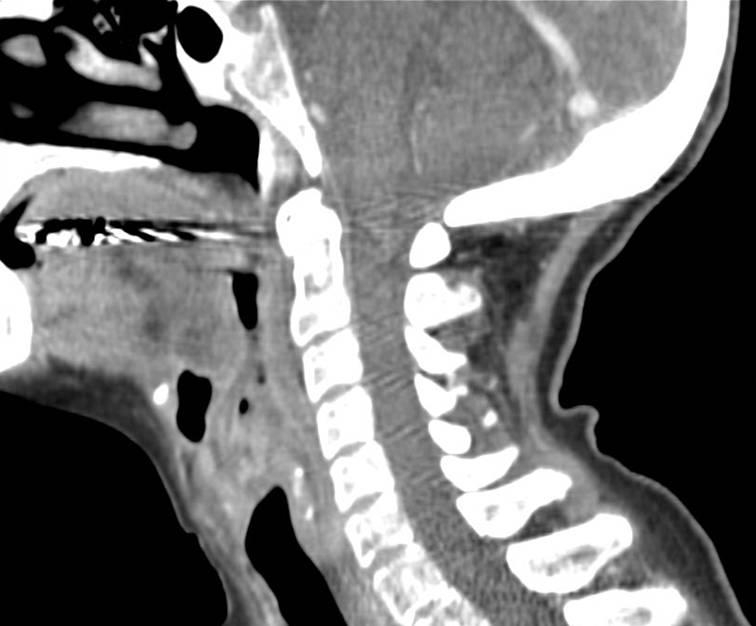 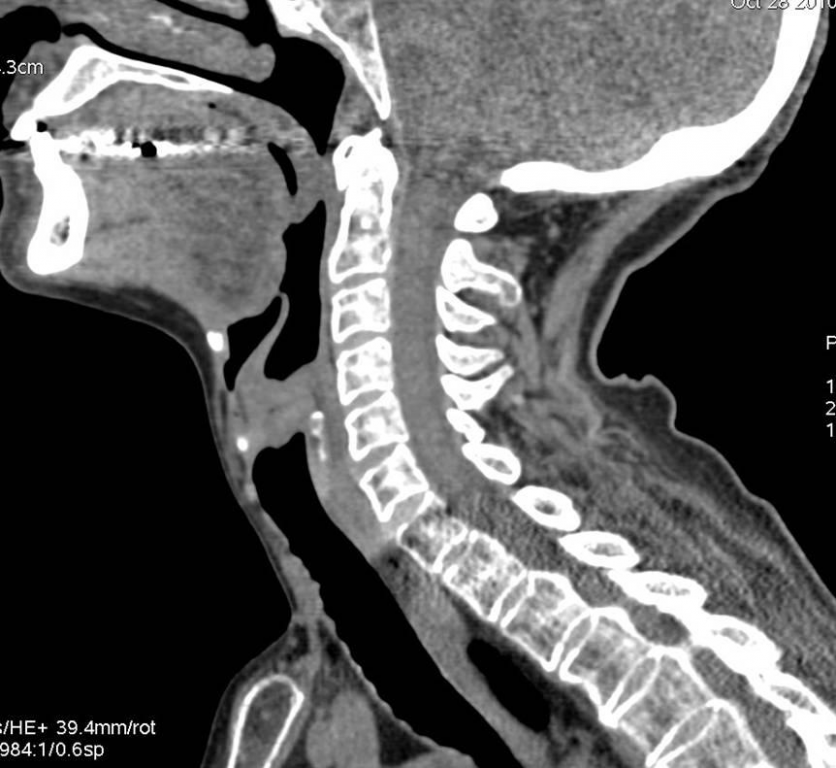 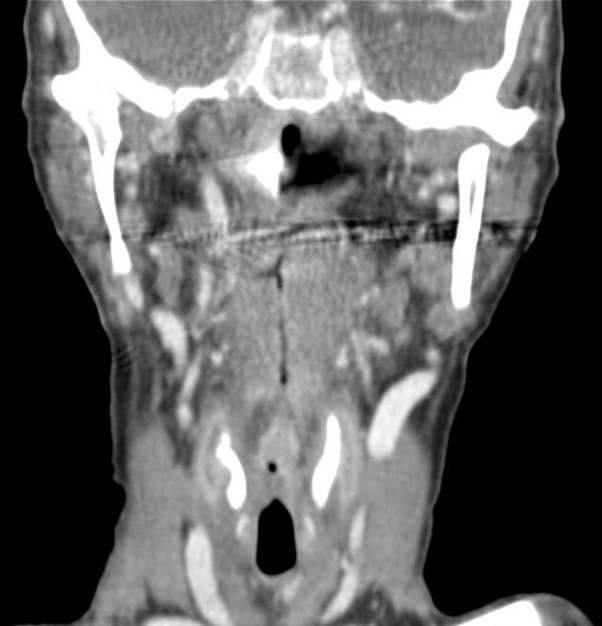 Contrast-enhanced coronal CT shows a circumferential thickening of the oropharynx, hypopharynx and larynx. There is a marked narrowing of the lumen.
Carcacía Ivana, Servicio de Radiodiagnóstico, CHUO, Ourense, España. 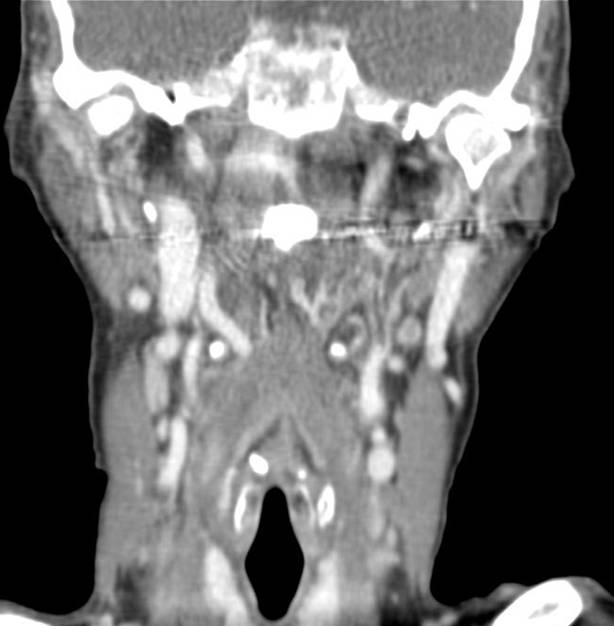 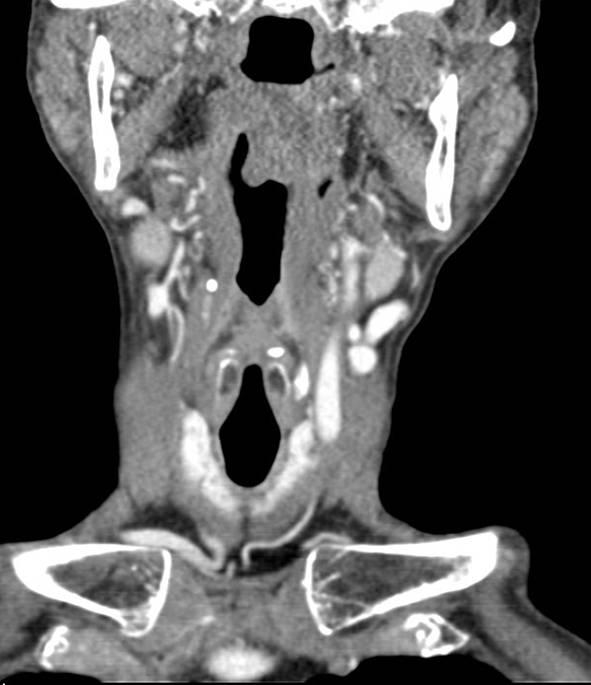