Osteolytic lesion in a young child

Categories
Area of Interest Interventional non-vascular, Musculoskeletal bone ; Imaging Technique CT, Digital radiography, MR
Procedure Biopsy, Diagnostic procedure ; Special Focus Neoplasia ;
Show more Show less
Download as PDF Print Show related cases Notify admin
Clinical History
2-year-old girl presented with thigh pain and limping gait for 3 weeks, with minimal clinical improvement after anti-inflammatory treatment. Blood workup showed an elevation of the erythrocyte sedimentation rate.
Imaging workup included X-ray, CT and MR.
A CT-guided biopsy was performed.
Imaging Findings
Pelvic X-ray depicted a lytic lesion in the right ischium.
Pelvic CT showed an expansive soft tissue lytic lesion in the right ischium/posterior aspect of the acetabulum, with rupture of the cortical bone and periosteal reaction. There was no evidence of chondroid or osteoid matrix. This lesion showed slight enhancement after i.v. contrast administration.
On MR this lesion was slightly heterogeneous with intermediate to high signal intensity on T2-weighted images, and hypointensity on T1-weighted images. Internal obturator muscle was pushed away by the tumoral lesion. The lesion and the adjacente bone marrow presented with high signal intensity on STIR images.
Discussion
Langerhans cell histiocytosis (LCH) is a rare disorder caused by inappropriate focal or systemic proliferation of Langerhans cells, lying in a background rich in other inflammatory cells [1, 2, 3, 4, 5]. Extension of the accompanying inflammatory infiltrate between and around the bony trabeculae may be present, simulating osteomyelitis [3].
The disease may be focal or systemic. The most common sites of involvement include the bone, lung, central nervous system, liver, skin, and lymph nodes [1, 3, 4].
LCH encompasses three classic clinical syndromes that are considered to be clinical variations of the same disease: eosinophilic granuloma (EG, localised benign form, isolated to bone and often monostotic), Hand–Schuller Christian disease (classic triad of skull lesions, exophthalmos, and diabetes insipidus), and Letterer–Siwe disease (disseminated lesions involving multiple visceral organs) [2].
Up to 80% of LCH lesions in children are of the EG type, and up to 90% occur in bone, most commonly involving the craniofacial bones, mandible and ribs, pelvis, diaphyseal and metaphyseal locations in long bones, especially the femur, and vertebral bodies [2, 3].
The localised form of LCH occurs in the first three decades of life, mostly between the age of 5 and 15 years. [3]
Radiologic features of LCH are variable but generally reflect a geographic lytic process in the medulla. Lesions are usually round or ovoid with well-defined, nonsclerotic margins. Variations in tumour margin and periosteal reaction occurs, some having ill-defined margins with laminated periosteal reaction and some being well-defined with sclerosis and a solid continuous periosteal reaction.
Cortical destruction is common, and soft tissue extension may be seen. [2, 3]
In general, the outcome of LCH is related to the degree of involvement of various organ systems at the time of diagnosis. [3]

Differential diagnosis in the presented case included Brodie abscess as a complication of osteomyelitis since there was cortical destruction of bone. However, the likelihood of this being the correct diagnosis was reduced because the mild contrast enhancement indicated an active bone process, whereas the laboratory values were almost normal. This contrast enhancement and periosteal reaction might suggest a malignant tumor, such as Ewing sarcoma or lymphoma, although they normally occur in older children.
In this patient, LCH, although rare, was the most likely diagnosis based on the radiologic and clinical features. As osteomyelitis and malignancy could not be excluded by radiologic means, therefore the diagnosis had to be confirmed and a CT-guided percutaneous biopsy was performed.
Differential Diagnosis List
Langerhans cell histiocytosis (eosinophilic granuloma)
Osteomyelitis
Ewing sarcoma
Lymphoma
Final Diagnosis
Langerhans cell histiocytosis (eosinophilic granuloma)
References 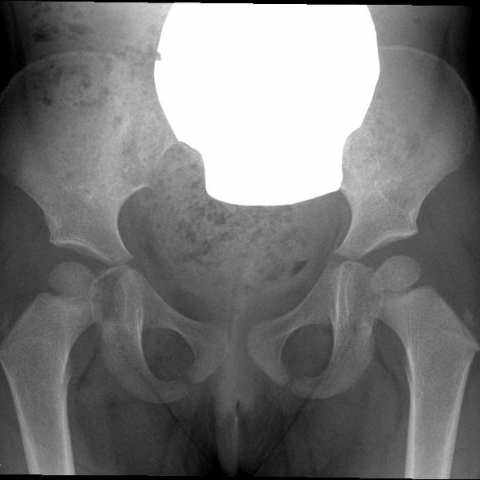 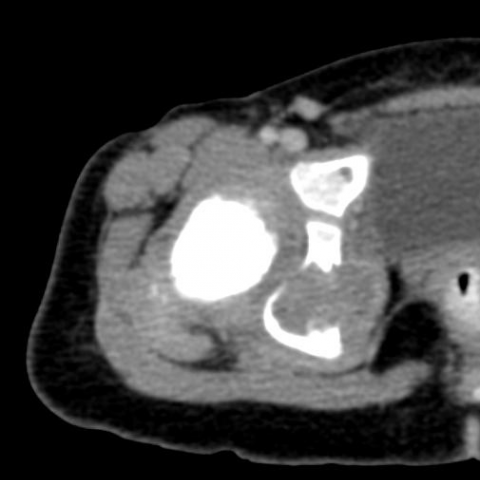 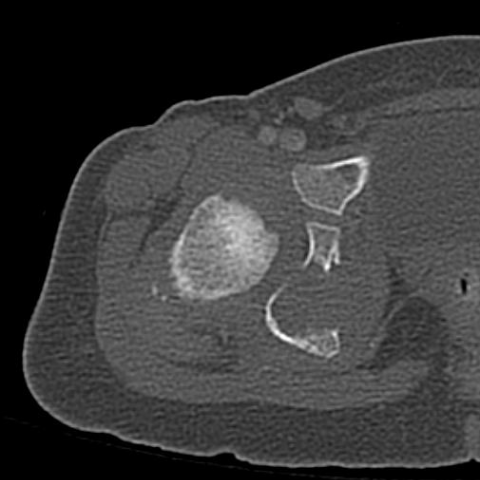 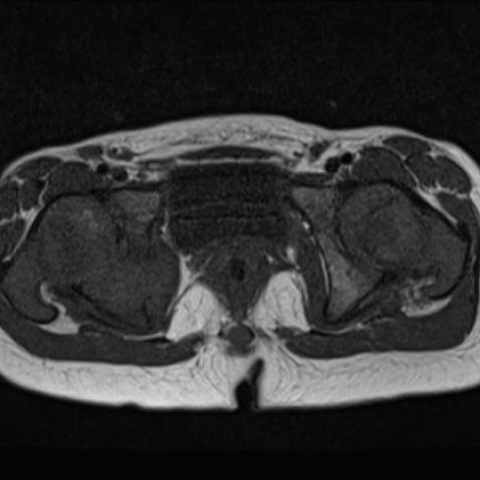 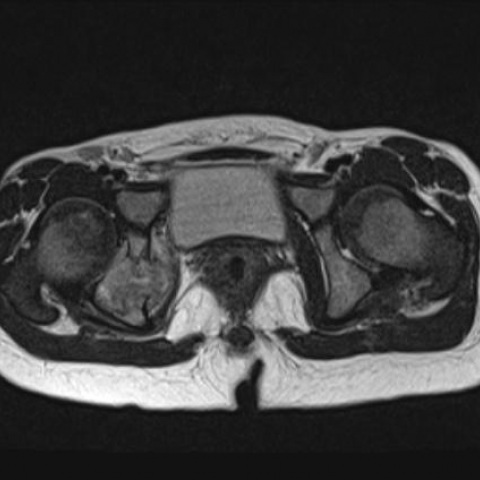 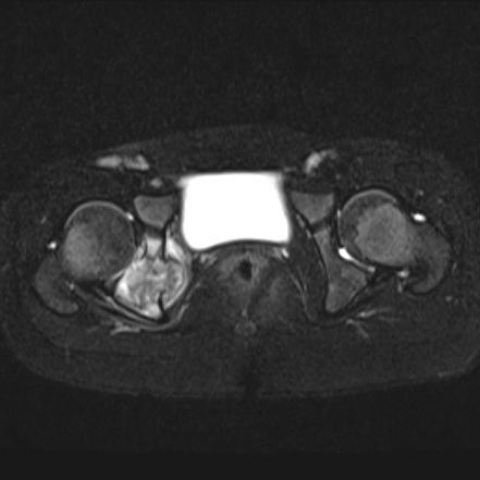 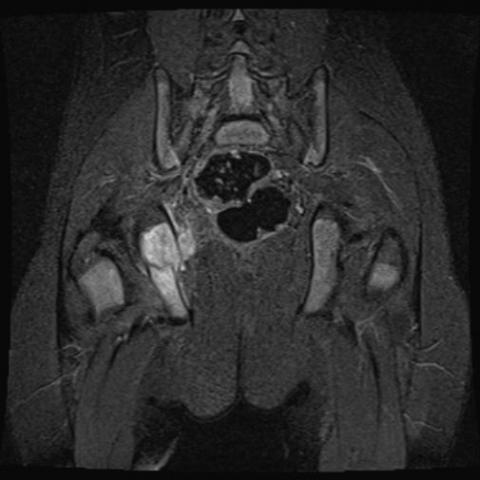 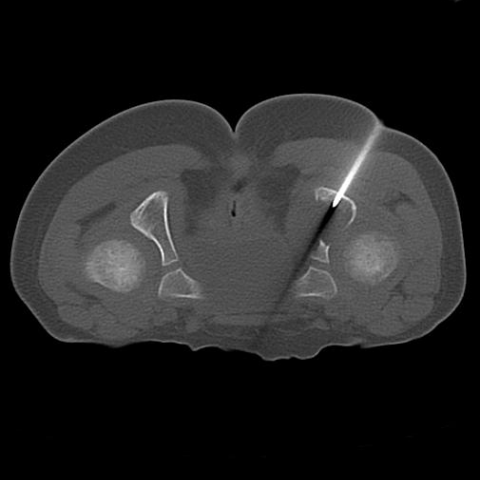 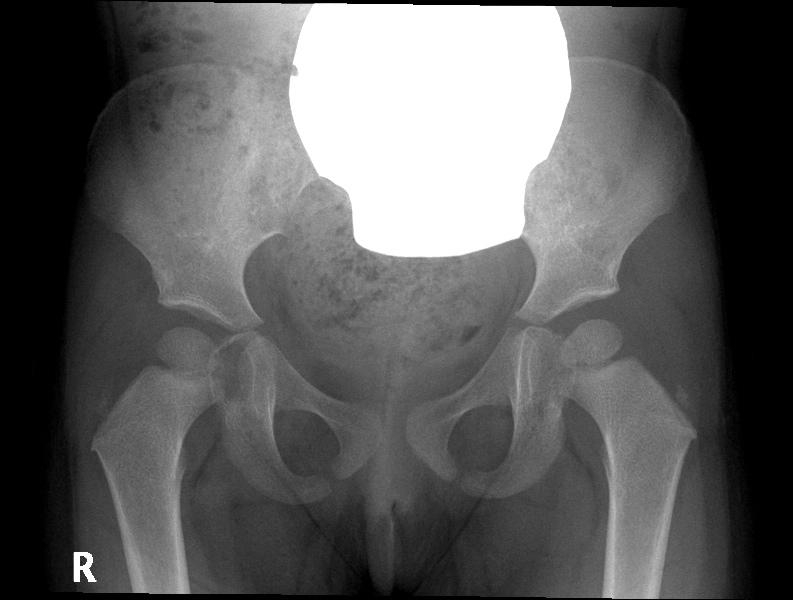 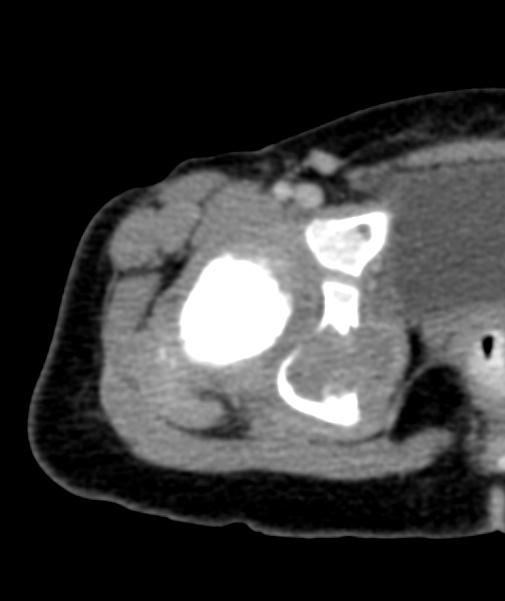 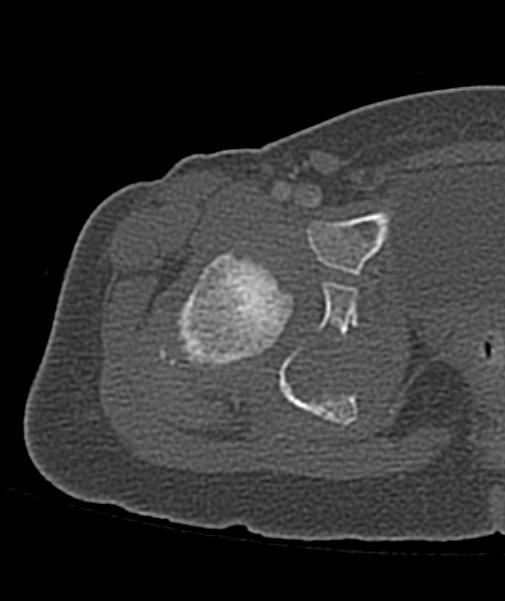 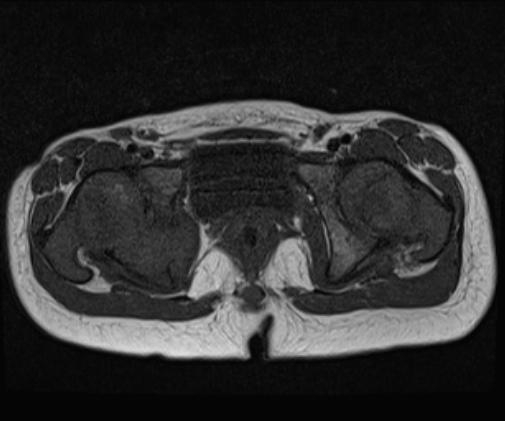 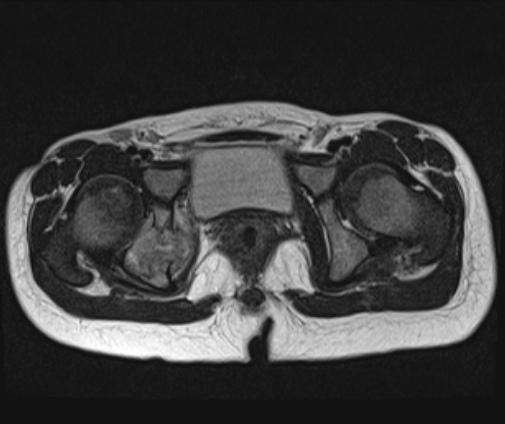 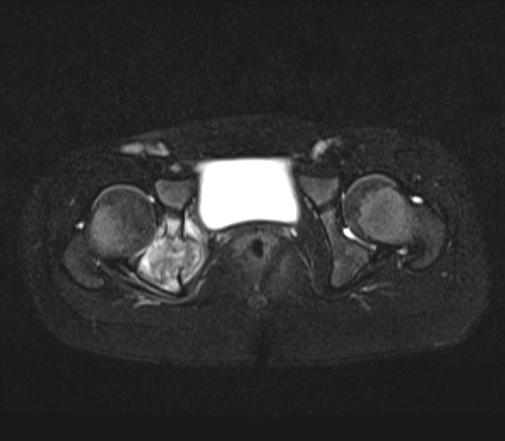 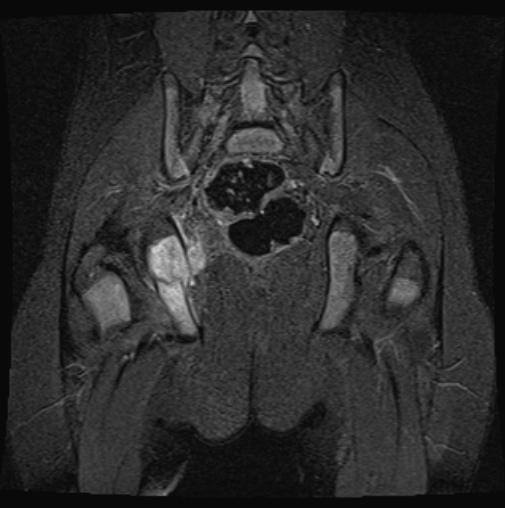 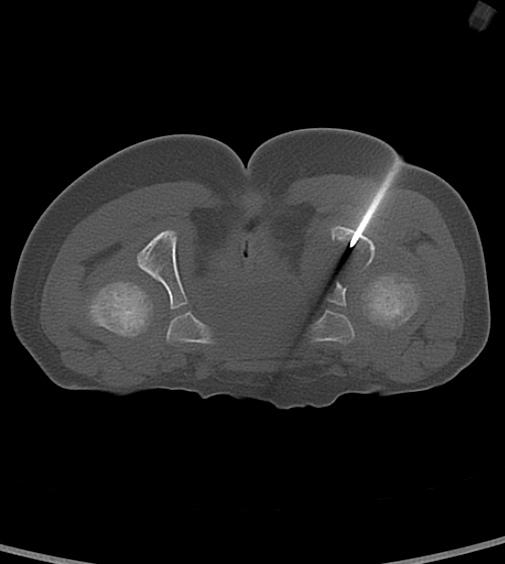