Aplasia of the right maxillary sinus

Categories
Area of Interest Head and neck ; Imaging Technique CT
Procedure Normal variants ; Special Focus Congenital ;
Show more Show less
Download as PDF Print Show related cases Notify admin
Clinical History
The patient attended the otology clinic with nasal problems. Some years prior to the examination she underwent FESS (functional endoscopic sinus surgery) of the left maxillary sinus. During the last months she had suffered from odd smelling sensations. She complained especially of constantly smelling cigarette smoke.
Imaging Findings
The images show complete aplasia of the right maxillary sinus. The uncinate process is well-defined bilaterally. The right inferior concha is hypoplastic compared with the left inferior concha. There is slight depression of the right inferior orbital rim when compared to the normal left side. On the left side, the osteomeatal complex is wide open following FESS.
Discussion
Maxillary sinus hypoplasia (MSH) or maxillary sinus aplasia (MSA) are rare conditions. Especially congenital aplasia is very rare and only few cases have been reported in literature. Sometimes the uncinate process is also hypoplastic or even absent [1]. A hypo- or hyperplastic appearance of the inferior nasal concha can also be seen at the same side of the undeveloped or partially developed maxillary sinus cavity. The maxillary sinus cavities are, as the first sinus cavities, thought to develop in the third month of life from the lateral side of the ethmoid wall. Sometimes the development is interrupted and this can result in a condition of MSH/MSA. The fetal development of the paranasal sinuses is quite well described, but the developmental basis of MSH/MSA remains unclear [3]. Some authors believe that the sinus cavities are developed from the uncinate process whereas others are convinced that both the maxillary sinus and the uncinate process develop from the same cartilageous structures of the lateral nasal wall [4, 5].
The most common cause of MSH and MSA are trauma, systemic disease or neoplasma [3]. Also the orbital floor can be affected and depression of the orbital cavity can be the result. This condition may be corrected by insertion of a bone graft [2]. Where a hypoplastic sinus carries the risk of infection due to the abnormal anatomy, a patient with maxillary aplasia has no antral space where an infection can develop. In case of surgery, it can be useful for the surgeon to know the anatomic details of the maxillary sinus cavities. At present, paranasal sinus CT is used routinely by otolaryngologists for diagnosis and preoperative planning. In the present case the patient had had a FESS performed at the left side where the osteomeatal complex is wide open (Fig. 1). Because the patient reported odd smelling sensations, infection was suspected. However, no signs of infection were found apart from subtle mucoperiosteal thickening in the lateral part of the left maxillary sinus (Fig 1).
When the CT examination was performed to clarify the condition, the right sided MSA and slightly depressed right inferior orbital margin (Fig 1) was discovered by incidence.
Differential Diagnosis List
Unilateral, congenital maxillary sinus aplasia.
Congenital maxillary hypoplasia
Acquired maxillary aplasia
Final Diagnosis
Unilateral, congenital maxillary sinus aplasia.
References 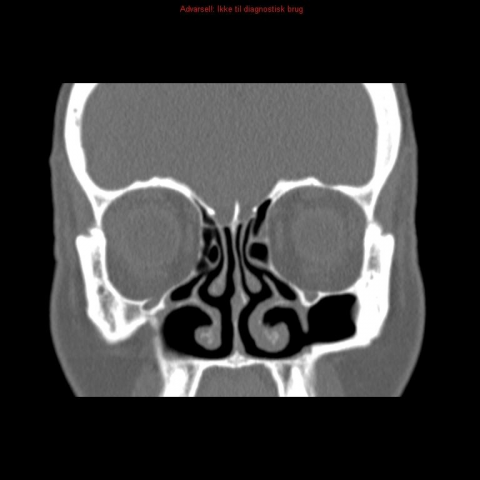 Rightsided maxillary sinus aplasia (MSA) with slight depression of the ipsilateral inferior orbital margin is seen. A leftsided FESS caused a wide nasal opening into the maxillary sinus below the level of the inferior turbinate.
Figure 2 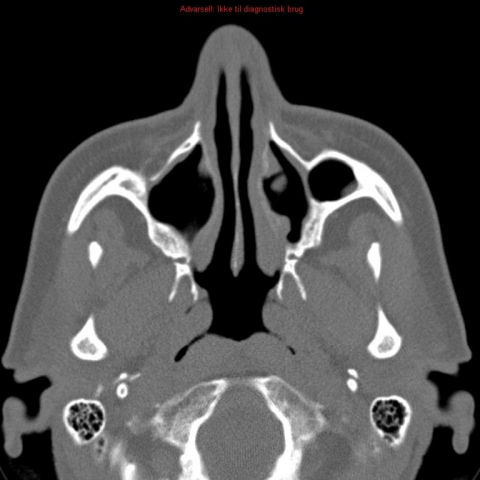 Aplasia of the right maxillary sinus. The air configuration on the right side is caused by (reactive) lateral bulging of the nasal cavity wall.
Figure 3

Coronal view of the right infundibulum 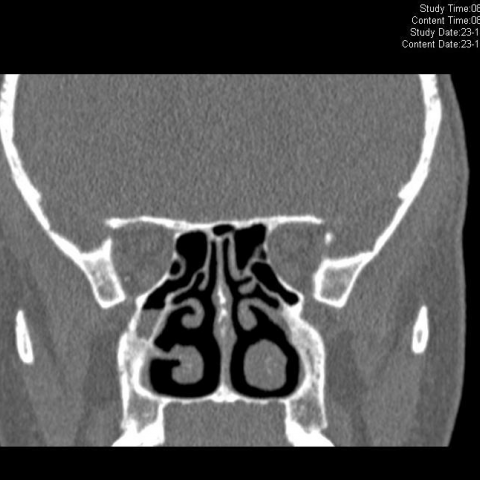 The right infundibulum is leading nowhere since the right sinus is aplastic. A small amount of nasal fluid is visible at the bottom. 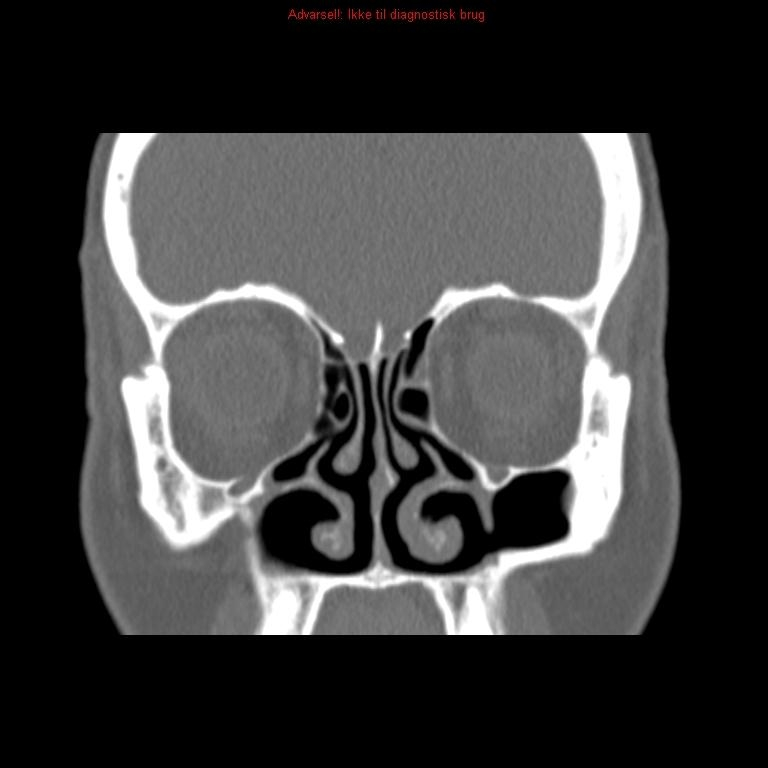 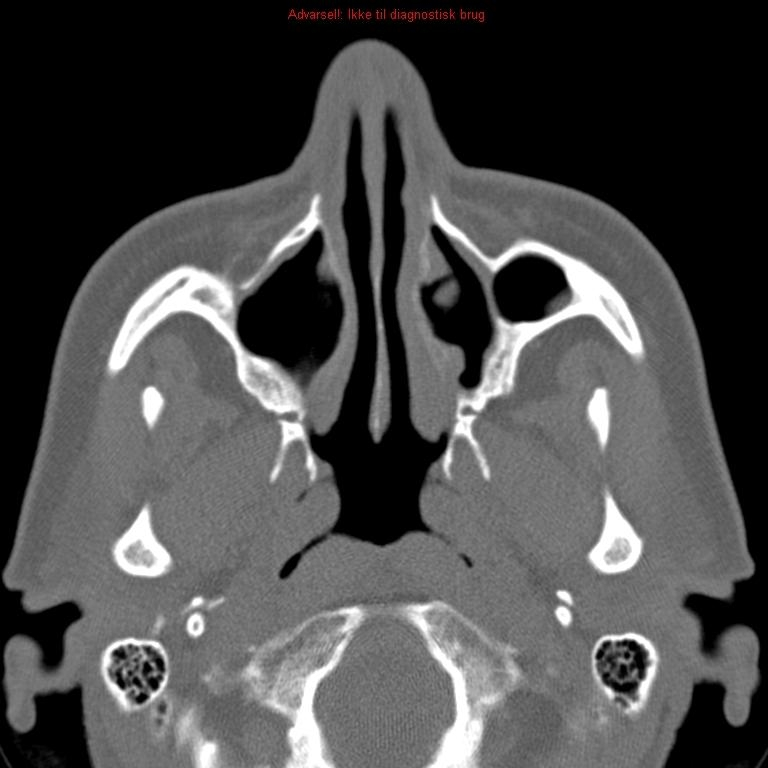 Coronal view of the right infundibulum 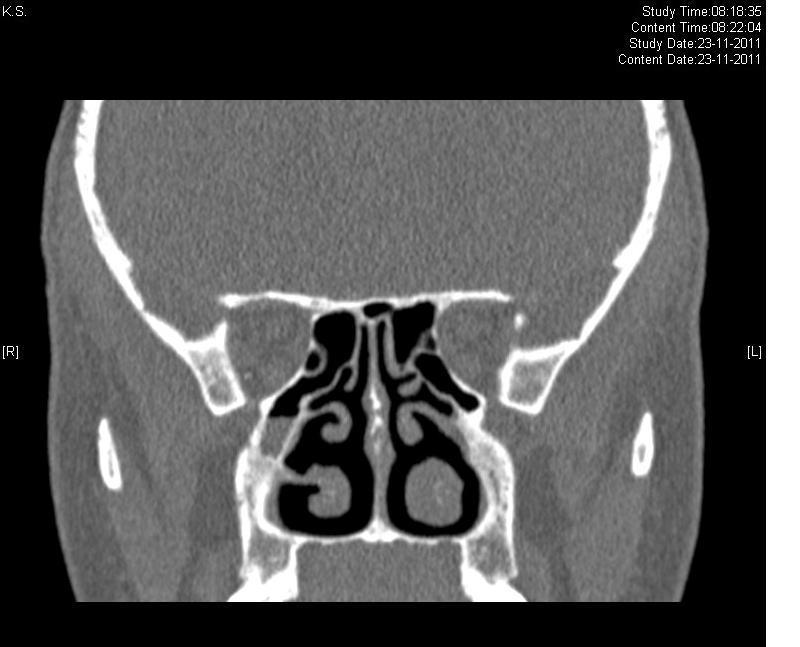 The right infundibulum is leading nowhere since the right sinus is aplastic. A small amount of nasal fluid is visible at the bottom.
Marklund M, McLean K. Dept. Radiology, Koege University Hospital, Denmark