Categories
No Area of Interest ; Imaging Technique Ultrasound, MR
No Procedure ; No Special Focus ;
Show more Show less
Download as PDF Print Show related cases Notify admin
Clinical History
Large, distended abdomen. Born by caesarian section with a weight of 4810 grams. Soon after birth her mother noticed distension of the abdomen.
Imaging Findings
A 3-month-old girl was admitted with a large, distended abdomen. She was born by cesarian section with a weight of 4810 grams. Soon after birth her mother noticed distension of the abdomen. On clinical examination a large, firm and nontender liver was palpable, extending downwards to the pelvic rim. Laboratory findings showed microcytic, hypochromic anemia with low serum iron. Coagulation studies, liver function tests and catecholamines were within normal range. Plain film of the abdomen, ultrasonography and selective arteriography of the celiac trunk were performed.
Discussion
Infantile hepatic hemangioendothelioma (IHH) is a type of capillary hemangioma, which is seen almost exclusively in children. It is the most common symptomatic vascular tumor, with 85% of cases presenting in the first 6 months of life. There is a distinct female predominance. Solitary lesions are more common than multiple lesions. The lesions of the liver consist of gray or pink nodules one of them with a hemorrhagic center varying in diameter from 1 to 3cm. The tumor may also appear as a large single mass. Microscopically, there are capillary sized vascular channels, lined by one or more layer of plump endothelial cells. Proliferation of the endothelial cells may obliterate and sequestrate the bile ducts within the tumor. Hemangioendotheliomas in childhood are generally accepted as being benign liver tumors of vascular origin, but they have a high frequency of malignant degeneration becoming malignant hemangioendothelial sarcomas. Clinically, the condition manifests by a classic triad consisting of hepatomegaly, congestive heart failure and cutaneous hemangiomas. Complications of the disease such as consumptive coagulopathy with thrombocytopenia (Kassabach-Merrit syndrome) and congestive heart failure are often fatal, with a mortality rate of 30% within 6 months. The ultrasound findings in hemangioendothelioma are variable, ranging from hypoechogenic to isoechogenic or strong echogenic patterns depending on cellular content and presence of large sinusoids. CT scan and MRI show multiple nodules with the same characteristics as hepatic hemangiomas. On angiography, the appearance of these tumors is somewhat different from the cavernous hemangiomas. There are irregular spaces which retain contrast medium in the capillary phase with or without arteriovenous shunting, and early venous drainage to the hepatic veins. The differential diagnosis includes neuroblastoma or metastases of a neuroblastoma and mesenchymal hamartoma. Initial management of IHH can be conservative because spontaneous regression may occur. Therapy consists of high-dose corticosteroids and, more recently, interferon-alfa. If the lesion is solitary a surgical excision or selective embolization of the feeding vessels can be considered.
Differential Diagnosis List
Infantile hepatic hemangioendothelioma
Final Diagnosis
Infantile hepatic hemangioendothelioma
References

Plain radiograph of the abdomen 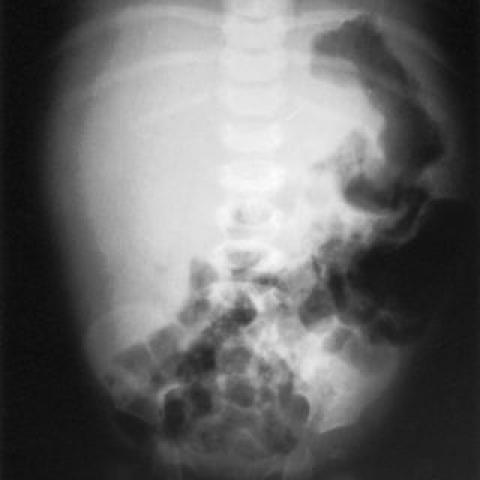 Marked displacement of the stomach and of bowel loops suggesting hepatomegaly. Calcifications in the liver are not visible.
Figure 2

Ultrasonography of the right upper abdomen 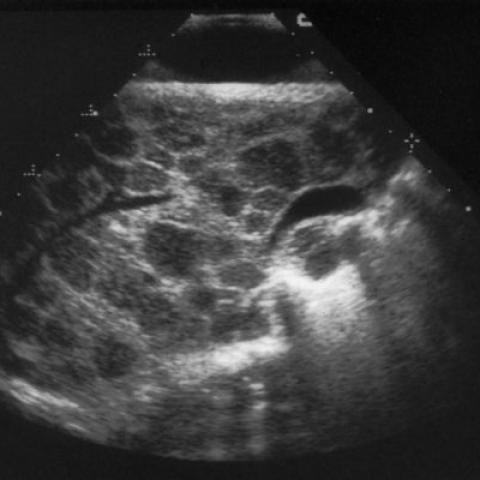 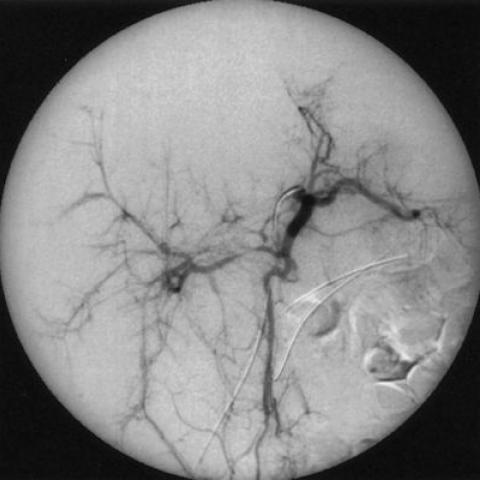 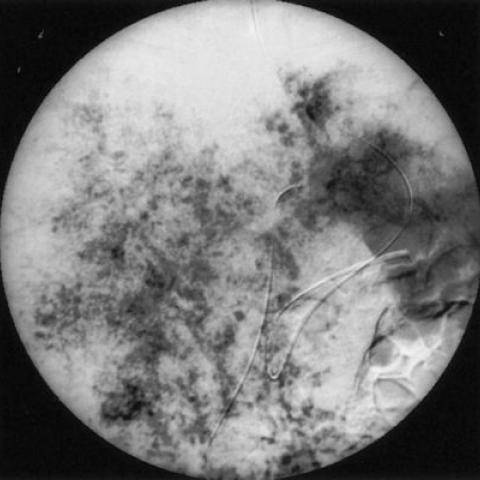 Plain radiograph of the abdomen 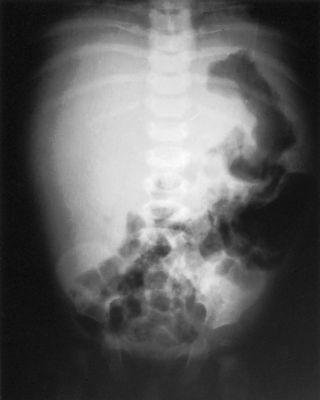 Marked displacement of the stomach and of bowel loops suggesting hepatomegaly. Calcifications in the liver are not visible.

Ultrasonography of the right upper abdomen 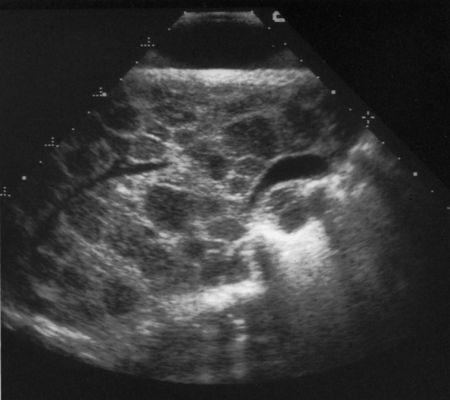 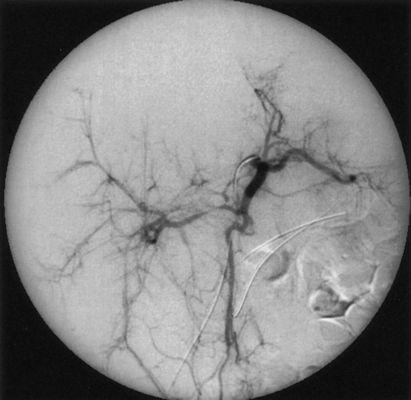 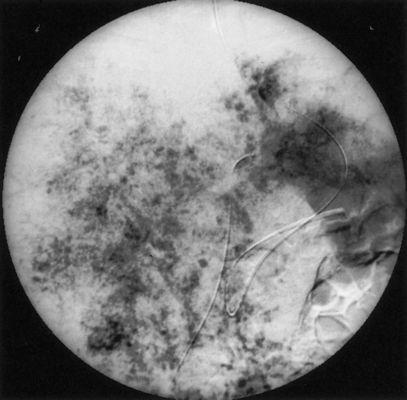