Download as PDF Print Show related cases Notify admin
Clinical History
Child with asymmetrical head. No other abnormalities noted.
Imaging Findings
Well doing infant with misshapen head. Parents asked their paediatrician about the head form, which had been initially considered as positional plagiocephaly. Parents did not notice any dynamics within 3 months, and asked the physician for further investigation. Referring paediatrician requested Head NECT.
Discussion
Performed 3D VR revealed cranial asymmetric pattern, with forehead and orbital rim (eyebrow) flattened appearance at the right side and complete closure of the right coronal suture. Unilateral coronal suture stenosis provokes a shortening of the orbital roof at side. This gives a "winking" effect. These features may also be more apparent when looking at the child in the mirror. Plagiocephaly is known to be associated with ipsilateral overaction of inferior obliques. Retrusion of the trochlea leads to desagittalization of the reflected tendinous segment of the superior oblique. This reduces the effective length of the superior oblique but also reduces the infraducting vector of the latter.

Case outcome: child been referred for cranial surgery for correction.

Plagiocephaly is a term used to describe an asymmetric head shape. The word itself comes from the Greek plagios (oblique or slanted) and kephale (head). It is important to identify the type of plagiocephaly which is classified into:frontal (anterior) plagiocephaly, caused by unilateral synostosis of the coronal suture. And occipital (posterior) plagiocephaly, caused by unilateral synostosis of the lambdoid suture. Plagiocephaly can also be subdivided into synostotic, where one or more sutures are fused, and nonsynostotic, or deformational, plagiocephaly.
Frontal (anterior) plagiocephaly:
This condition occurs with premature closure of one coronal suture on one side of the skull. The resulting deformity does not only affect the skull, but it also results in under development of the ipsilateral frontal bone (forehead), supraorbital ridge (eyebrow) and anterior cranial fossa, giving a flattened appearance. The pathological changes also extend to involve the base of the skull resulting in lower facial deformity. This disorder is not congenital, does not have a genetic basis and is usually not associated with raised intracranial pressure. The traditional therapy involves surgical release i.e. reopening of the prematurely fused suture. This is extended down to the base of the skull and the surgery is typically accompanied with reconstructive remodeling of the frontal bone (forehead bone), and the supraorbital ridge (eyebrow portion of eye socket) in order to bring the forehead and eyebrow in a position symmetrical to the unaffected side.
Posterior (occipital) plagiocephaly:
The two predominant causes of posterior plagiocephaly are craniosynostosis (<2%) or positional molding (vast majority) of the lambdoid suture. This results in the flattening of the ipsilateral parietooccipital region. Positional (deformational) plagiocephaly refers to a misshapen (asymmetrical) shape of the head resulting from external repeated pressure to the same area of the head over a relatively long period of time causing a baby's head shape to be abnormal but with no real fusion of the skull sutures. The condition has become more common since the American Academy of Pediatrics recommended that infants sleep on their backs to reduce the incidence of sudden infant death syndrome (SIDS). Causes of positional plagiocephaly include prematurity, torticollis and cervical spine abnormalities.It is usually managed using non-surgical techniques except in severe persistent cases.
Differential Diagnosis List
Unilateral coronal synostosis (Plagiocephaly)
Final Diagnosis
Unilateral coronal synostosis (Plagiocephaly)
References 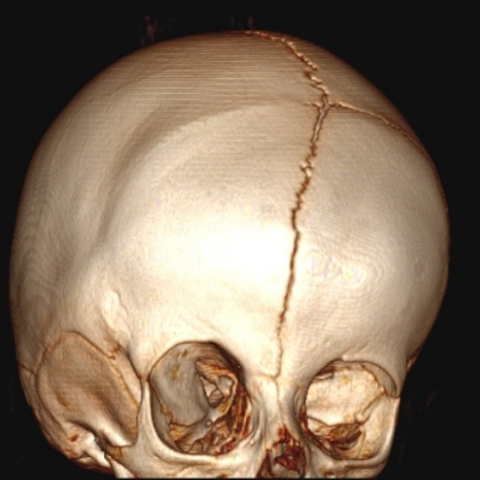 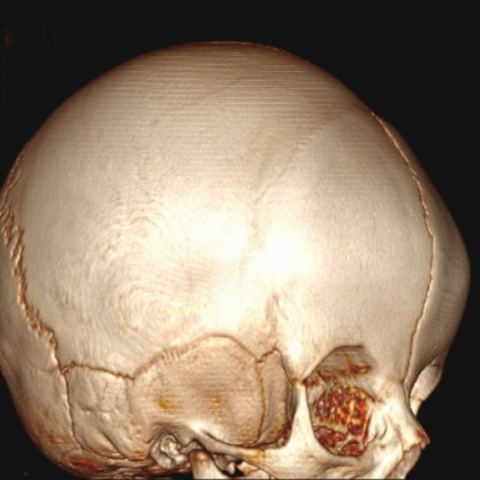 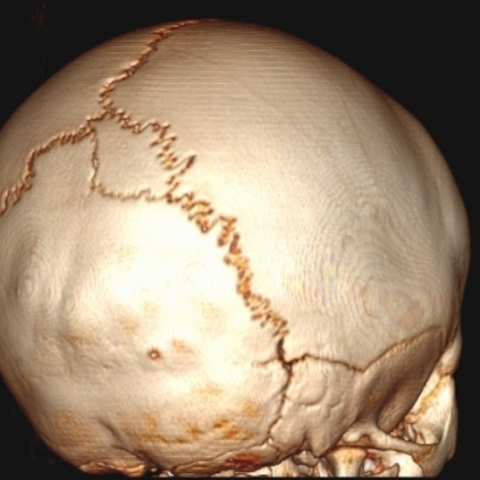 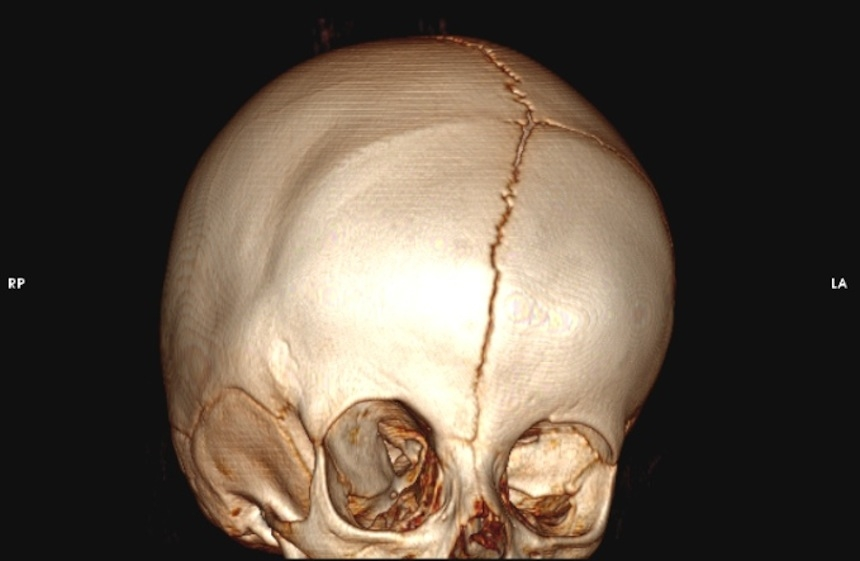 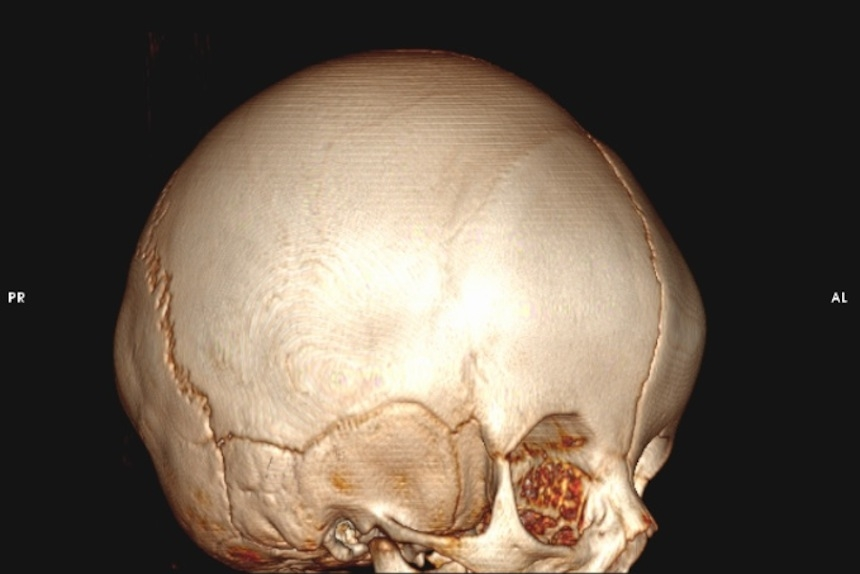 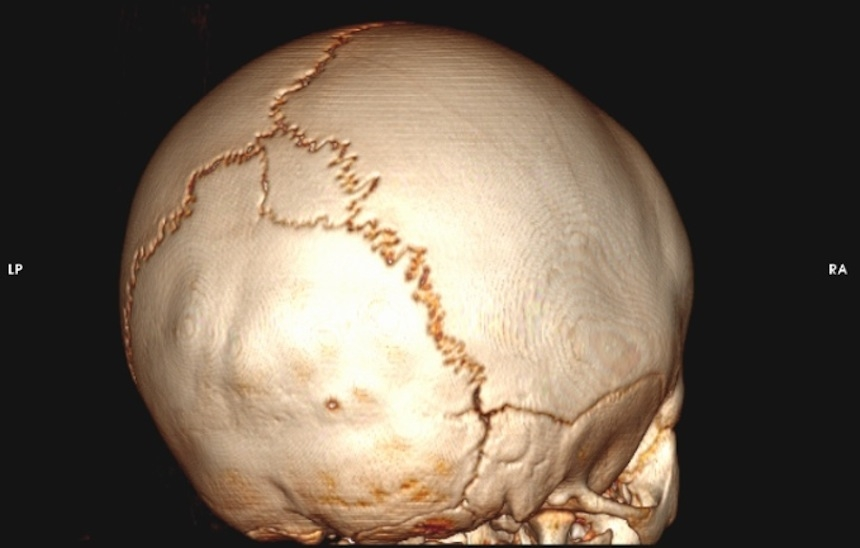