Download as PDF Print Show related cases Notify admin
Clinical History
A 63-year-old woman presented with abdominal pain and vomiting.
Imaging Findings
A 63-year-old woman presented to A&E with a 4 day history of worsening epigastric pain and projectile vomiting with retching which was not associated with nausea following a restaurant visit. On examination her upper abdomen was tender, a large epigastric mass was felt and she was tachycardic.
An abdominal radiograph showed normal bowel loops. A well defined large soft tissue shadow was seen occupying the epigastric and the LUQ regions.
A contrast enhanced CT (Fig. 2) showed a large hiatal hernia. The thoracic hernial sac contained a small part of the fundus but also contained a significant proportion of the distal stomach including antrum, pylorus and duodenal cap. The remaining intra-abdominal stomach was grossly dilated. The distal duodenum was collapsed and no obstructive lesion was seen.
A water soluble fluoroscopy study (Fig. 1) confirmed the gross dilatation of the proximal stomach and the presence of a large paraoesophageal hiatus hernia which mainly involved the distal stomach. Contrast material was seen to initially fill the subdiaphragmatic proximal stomach before being negotiated to delineate the distal intra-thoracic portion. Contrast failed to progress beyond the herniated portion on delayed imaging. A diagnosis of stomach outflow obstruction secondary to an incarcerated hiatus hernia and a mixed volvulus was made.
A gastric decompression tube was inserted and the patient was transferred to the regional GI surgical centre, where the above diagnosis was confirmed. Initial endoscopic decompression failed to correct the volvulus, therefore she had an emergency laparoscopic reduction of the volvulus and the hernia. The patient made good recovery.
Discussion
A gastric hiatal hernia occurs when part of the stomach protrudes through the diaphragmatic oesophageal hiatus. Its a relatively common condition ranging from 10% in patients younger than 45 years to as high as 70% in patients older than 70. It is more common in the western world and has been strongly associated with obesity and low fiber diet. There are two types of hiatal hernia. The sliding type of hernia almost never incarcerates. Even in paraoesophageal hiatal hernias, acute incarceration with strangulation remains a very rare life threatening complication. The mortality rate of an incarcerated hernia will increase dramatically if a gastric volvulus coexists. A gastric volvulus is defined as all or part of the stomach rotating by more than 180° which leads to flow obstruction. Because of the rich gastric vascular bed, strangulation and ischemia only occur in 5 – 28% of cases. Other complications following a gastric volvulus include perforation, haemorrhage, omental avulsion and splenic injury or rupture. Gastric volvulus usually presents acutely, with abdominal pain, initial vomiting and severe retching with no vomitus thereafter. Failure to pass an NG tube is commonly seen and should raise suspicions.
Two types of volvulus have been described: An organo-axial volvulus is where the stomach rotates around a longitudinal axis connecting the cardia to the pylorus. Anterior or posterior rotation can occur resulting in migration of the greater curve to lie superior to the lesser curvature (most common). In mesentero-axial rotation, the stomach rotates in a clockwise direction along a transverse axis running perpendicular to the middle of the greater and lesser curves. This will see the distal stomach migrating superiorly and anteriorly in relation to the cardia and fundus. Mixed gastric volvulus can occur. Our case demonstrates a partial mixed volvulus, where only the distal stomach underwent an axial rotation. This led to the appearance of a central constricted twist, giving the stomach an hour glass appearance (better seen on the fluoroscopy images). Also some degree of mesentero-axial rotation must have occured for the pyloris and antrum to migrate superiorly to enter the thoracic cavity whilst the cardia and fundus remained almost entirely subdiaphragmatic.
In the radiological diagnosis of gastric volvulus, a chest X-ray can show an intrathoracic hernia usually with a gas fluid level. Cross sectional imaging is useful in demonstrating anatomy and helping to plan surgery. Its main role is to exclude other causes of an acute abdomen and the co-presence of complications. An upper GI contrast fluoroscopy study is usually diagnostic and can demonstrate associated obstruction. Water soluble contrast is preferred by many because of the eminent risk of perforation. Fiberoptic endoscopy is technically difficult and generally unrewarding.
The initial thought should be immediate decompression. Urgent surgical intervention is usually indicated. Whether a thoracic or an abdominal approach is to be utilised is still a matter of debate. Gastropexy and/or repair of the diaphragmatic defect are the usual surgical objectives.
Differential Diagnosis List
Gastric outlet obstruction secondary to an incarcerated hiatus hernia and a gastric volvulus.
Final Diagnosis
Gastric outlet obstruction secondary to an incarcerated hiatus hernia and a gastric volvulus.
References 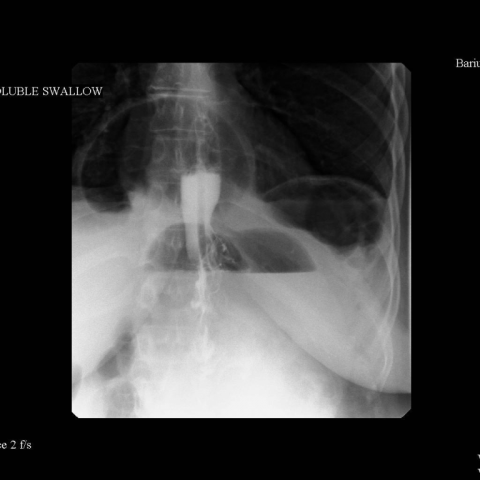 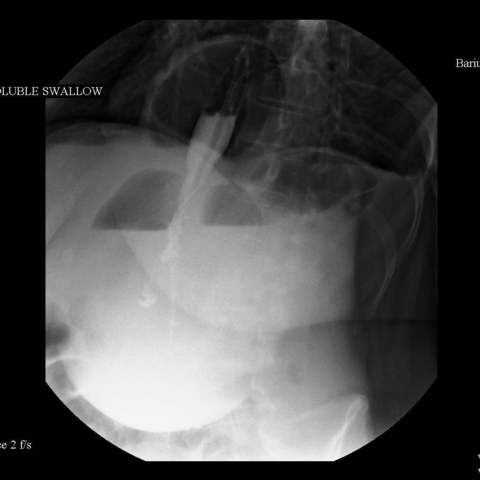 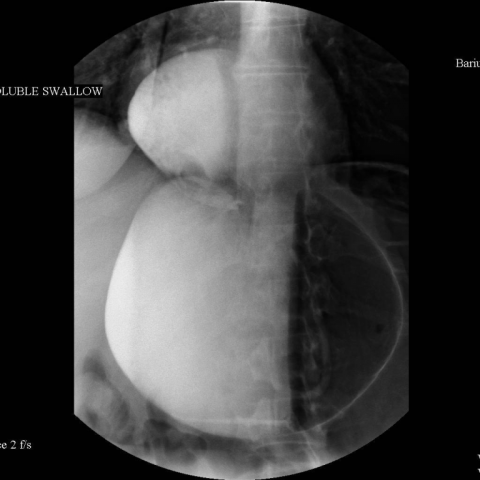 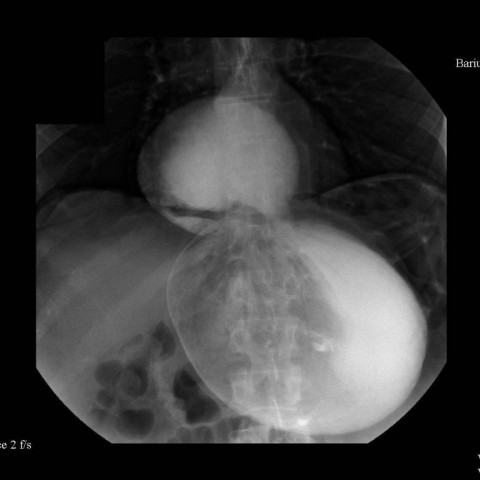 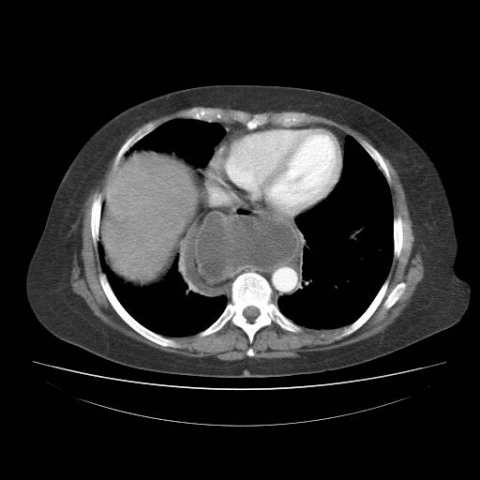 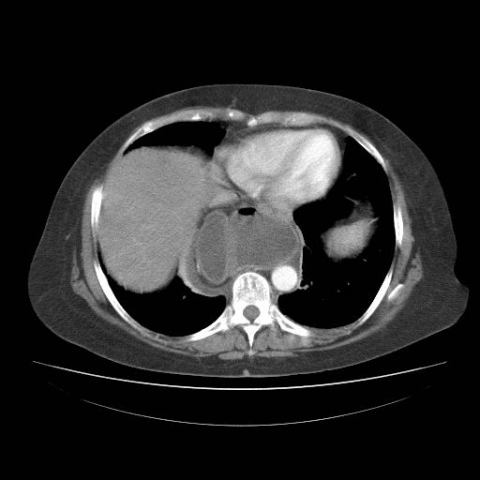 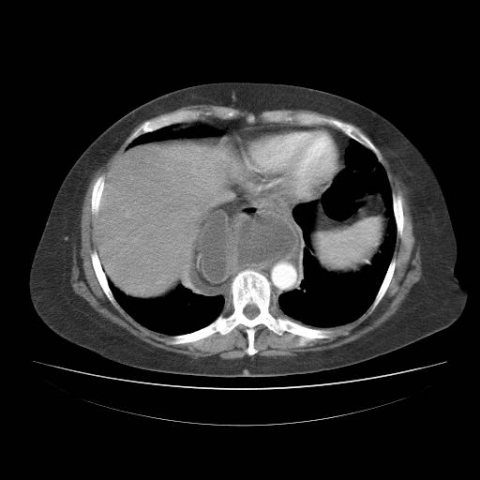 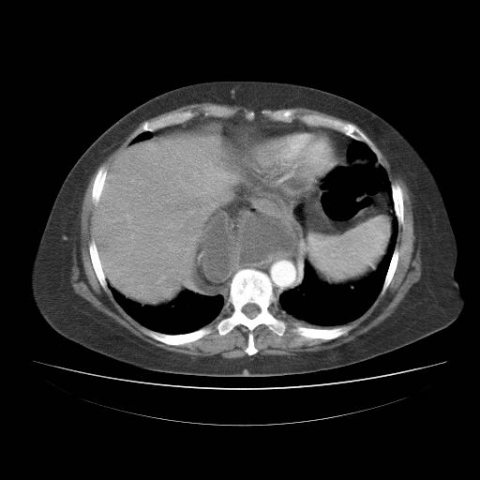 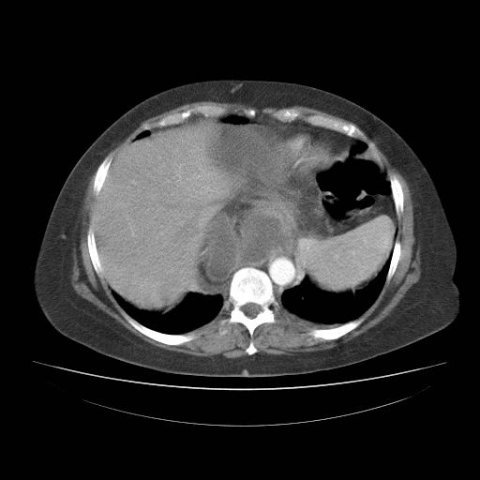 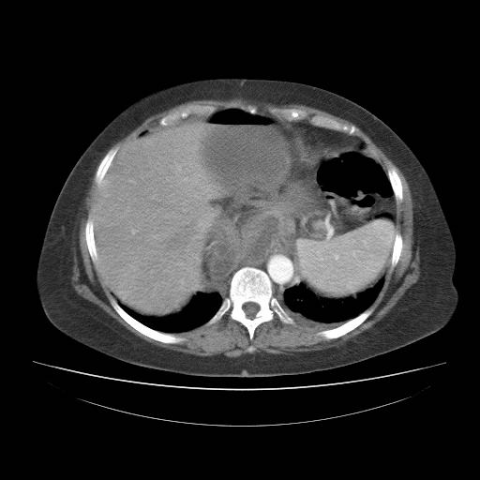 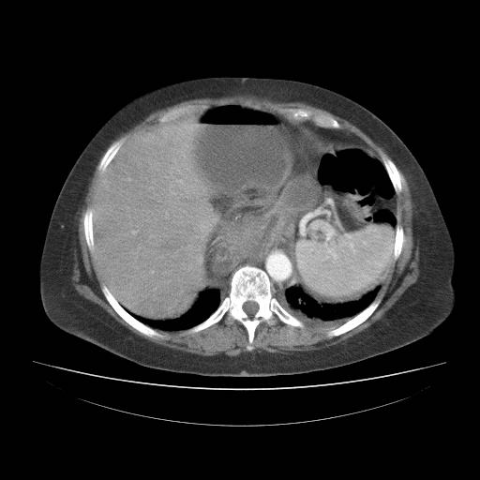 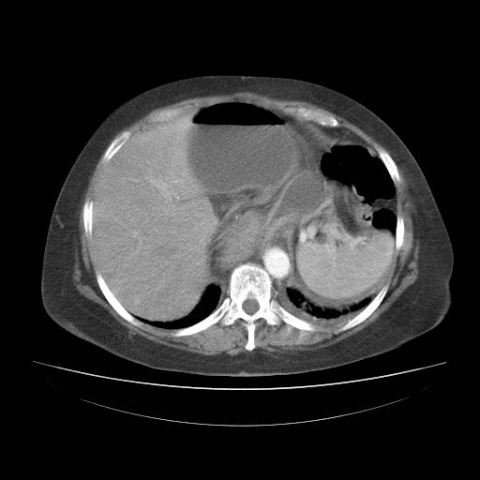 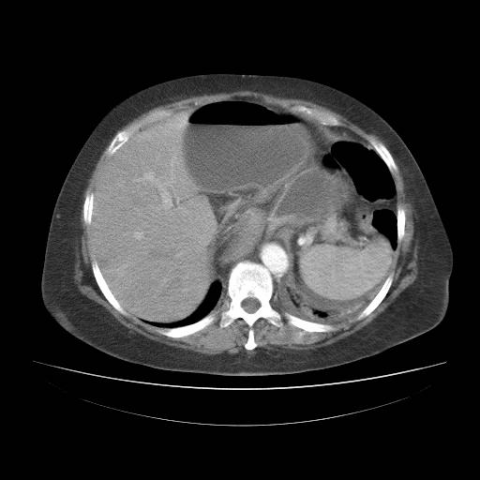 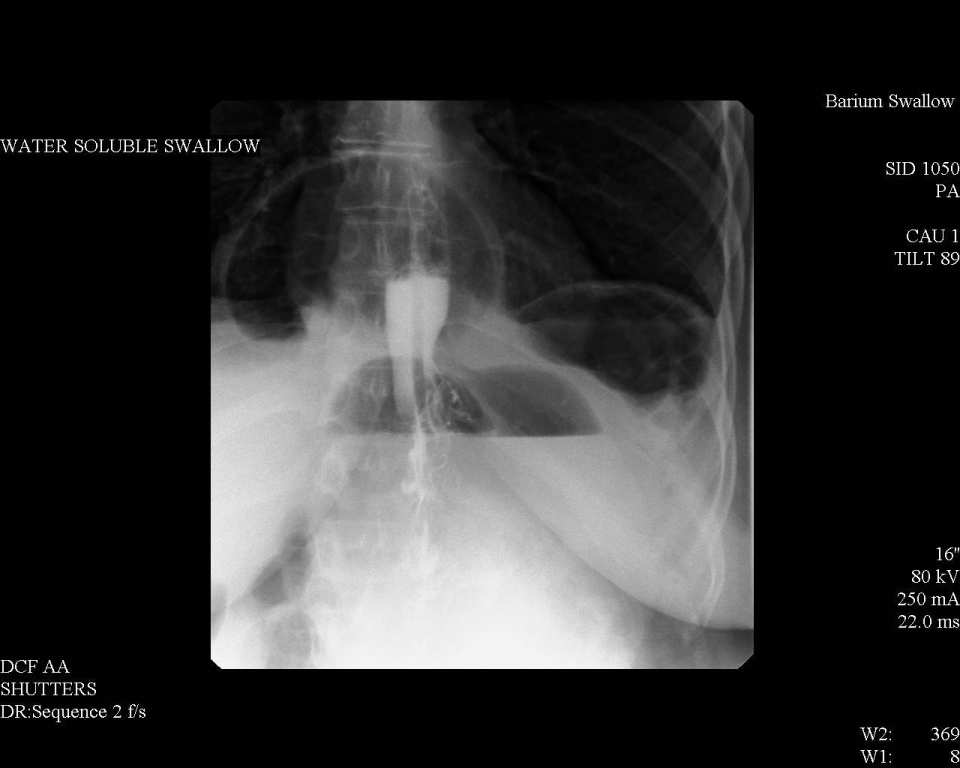 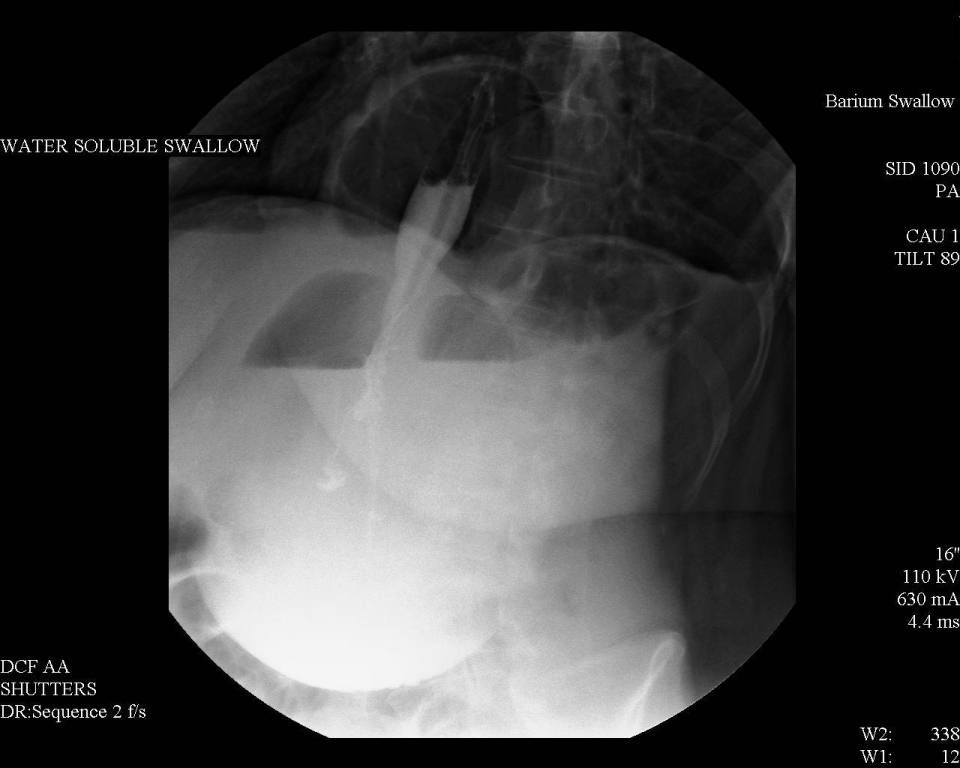 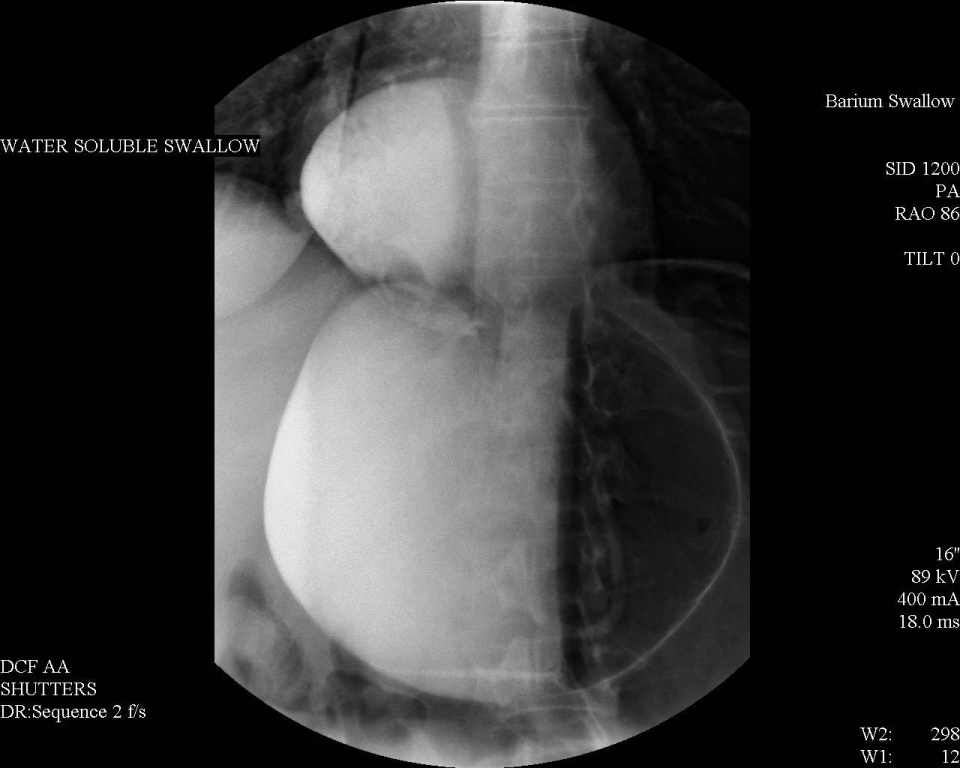 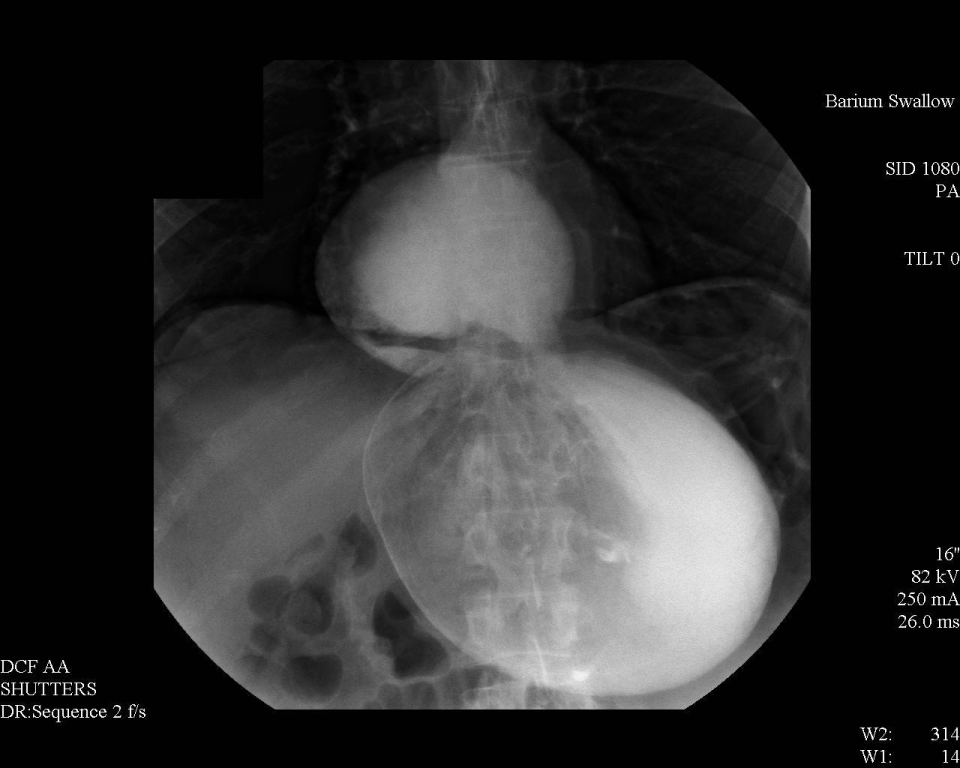 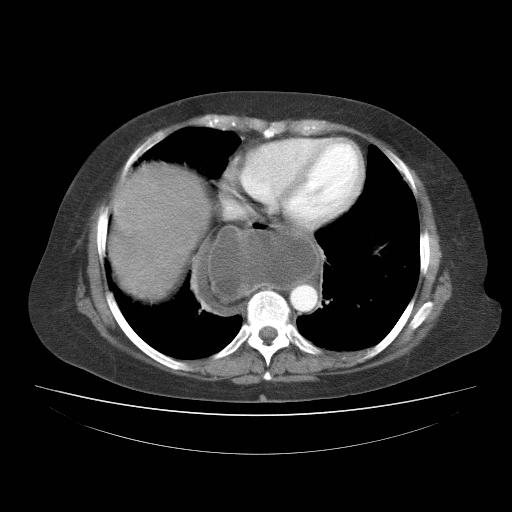 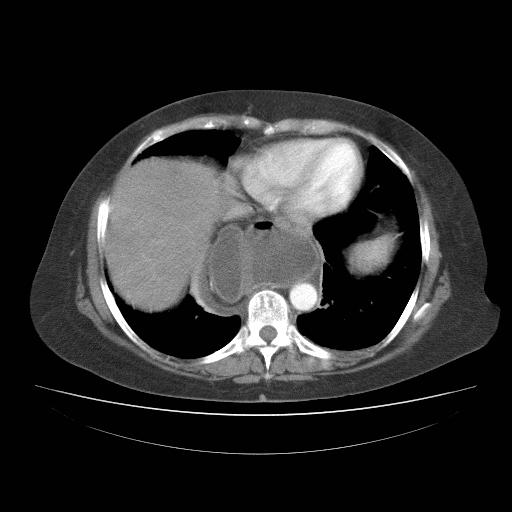 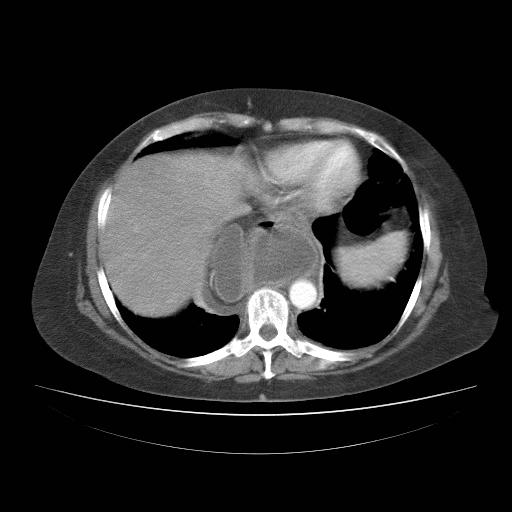 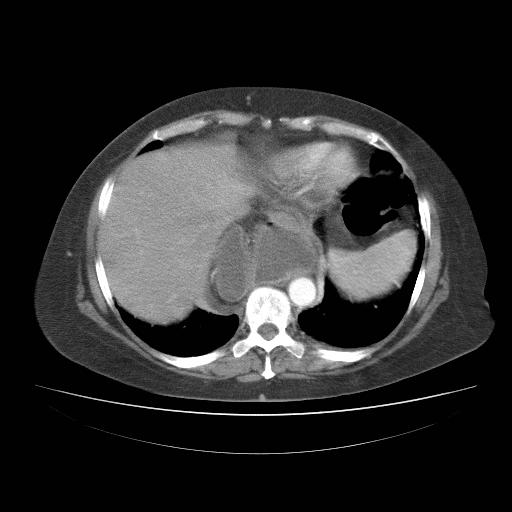 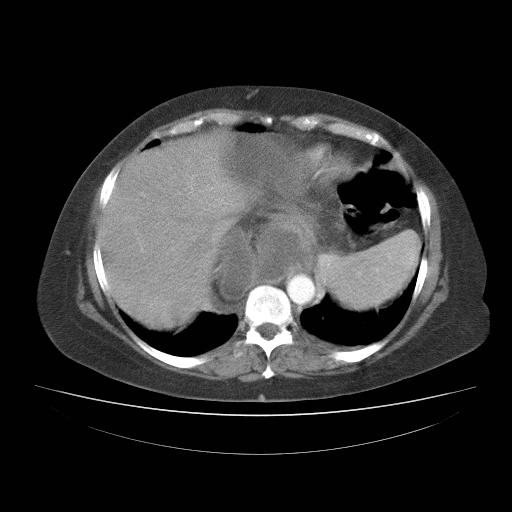 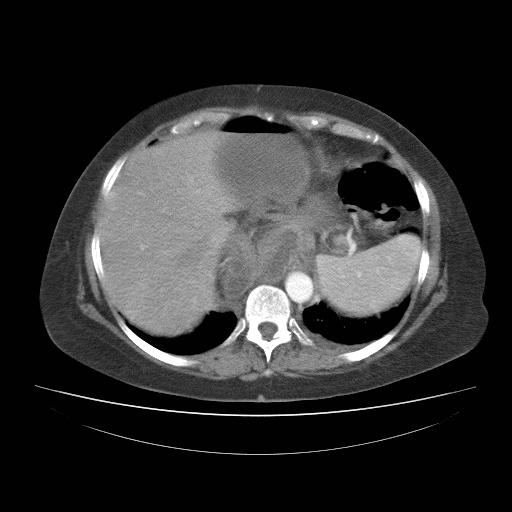 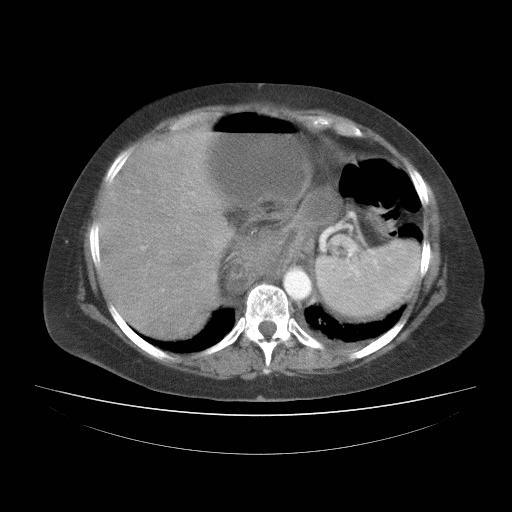 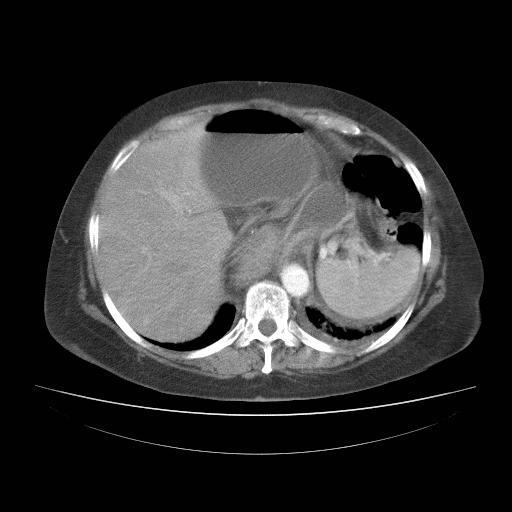 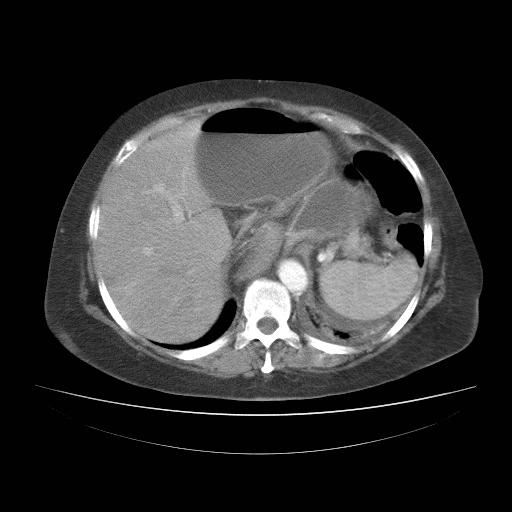