Leukaemia in a 4-month-old girl – role of MRI

Download as PDF Print Show related cases Notify admin
Clinical History
A 4-month-old girl was admitted to the hospital with a history of fever, diarrhea and excessive crying. During hospitalization acute flacid paresis of left upper extremity developed. Imaging examinations (X-ray, skeletal scintigraphy and MRI) were crucial for the final diagnosis of acute leukaemia.
Imaging Findings
A 4-month-old girl was brought to the paediatric department with a history of fever, diarrhea and excessive crying for three days. Mild petechial rash was noted over the trunk and lower limbs. Laboratory tests revealed raised inflammatory parameters and thrombocytopenia. Abdominal ultrasound showed splenomegaly. Lumbal punction was performed and liquor examination was abnormal to H. influenzae (positive serology). During antibiotic treatment acute flacid paresis of the left upper extremity developed. The patient was subjected to X-ray of the left upper extremity. Careful examination of X-ray revealed osteolytic lesion with poorly demarcated margins in the proximal diaphysis of humerus, a finding indicative for an infiltrating process.
Head MRI did not show any abnormalities, however MRI of cervical vertebrae showed hyperintesive signal on STIR sequences paravertebrally in the C5-Th1 area. Thus the patient was referred to skeletal scintigraphy that showed increased activity in numerous long and flat bones, suggesting an infiltrating process. Interestingly, bone marrow biopsy showed no evidence of malignant cells.
Finally, whole body MRI was performed. On MRI, multiple low signal intensity lesions on T1-weighted images and high signal intensity lesions on T2-weighted images were seen in the long bones, as well as ribs and both scapulas. Post-contrast T1-weighted images revealed slight peripheral enhancement of several lesions. The MRI findings were suggestive of leukaemic infiltration. Fine needle aspiration biopsy of a humeral lesion finally confirmed diagnosis of acute lymphoblastic leukaemia.
Discussion
Acute lymphoblastic leukaemia (ALL) is the most common malignancy diagnosed in children. However, it is a very rare disorder in infants younger than 1 year of age. Physical findings in children with ALL reflect bone marrow infiltration. Patients present with pallor caused by anaemia, petechiae secondary to thrombocytopenia and have signs of infection because of neutropenia. In addition, leukaemic spread is generally seen as hepatosplenomegaly.
It is important to differentiate leukaemia from other leukoerythroblastic conditions, which are seen in response to infection. Complete morphologic, immunologic, and genetic examination of the blood cells is necessary to establish the diagnosis of ALL. In more than 90% of ALL cases, specific genetic alterations can be found in the leukemic cells. In our case all cytogenetic and molecular genetic studies were normal. Even bone marrow biopsy showed no malignant cells. Only imaging studies (X ray, scintigraphy, MRI) revealed the infiltration process of the bone marrow.
MR imaging has proved to be very sensitive for depicting changes in the bone marrow in patients with ALL. Typical pattern in acute leukaemia is diffuse decrease in the signal intensity of the marrow on T1-weighted images. However, in children and young adults, a diffuse MR pattern may be difficult to differentiate from pure haematopoietic marrow on T1-weighted images. On T2-weighted images a variable increase in the signal intensity of the abnormal marrow is observed. This increase in signal may be difficult to appreciate if there is no normal marrow for comparison. After the administration of intravenous contrast, the abnormal marrow enhances. The MR patterns of leukaemia may be indistinguishable from similar patterns in myeloma or lymphoma.
In our case a variegated pattern (numerous small foci of disease on a background of intact marrow) of leukaemic infiltration was seen.
Differential Diagnosis List
Acute lymphoblastic leukaemia.
Final Diagnosis
Acute lymphoblastic leukaemia.
References 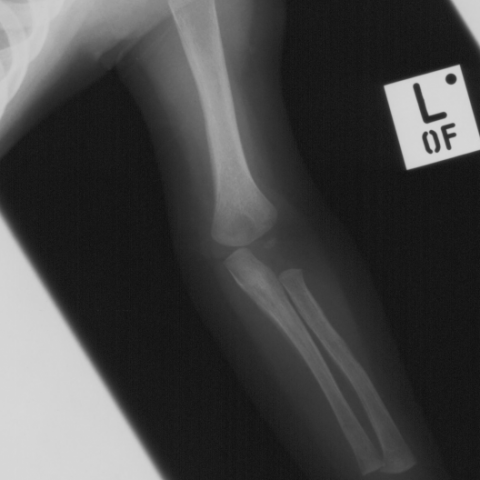 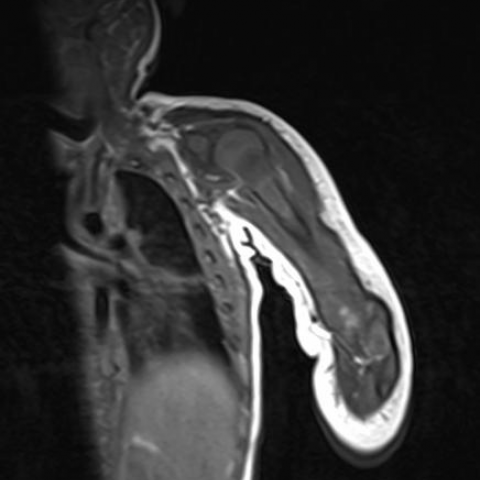 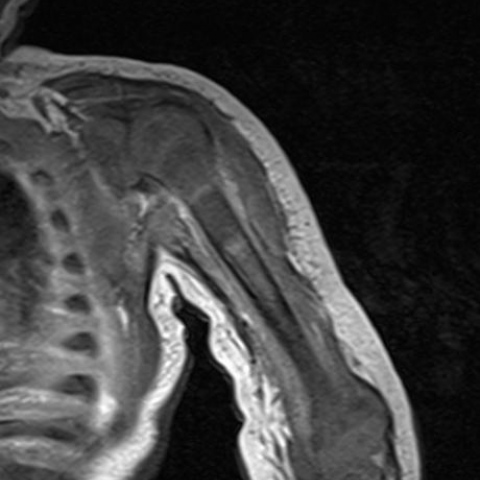 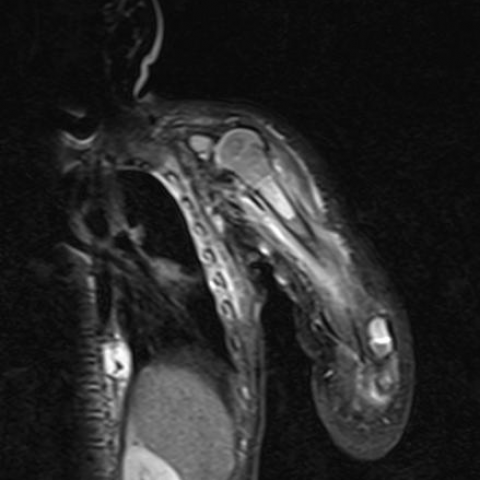 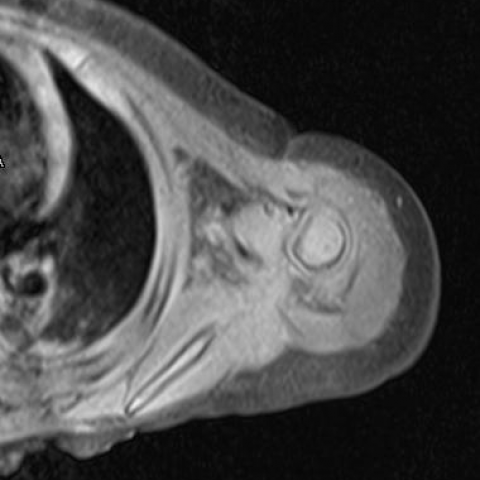 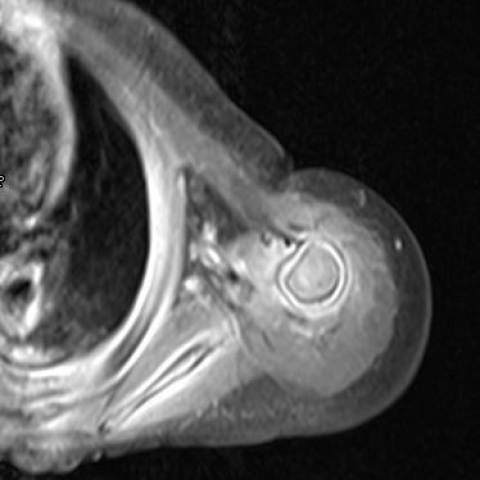 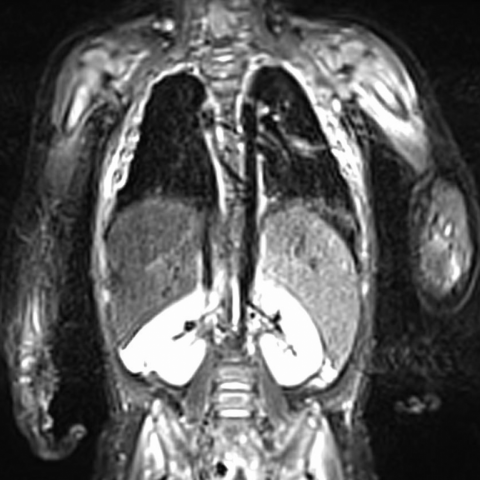 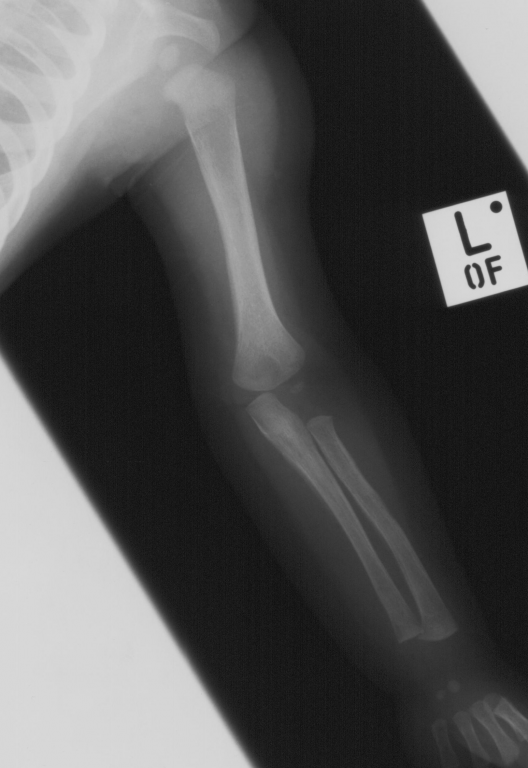 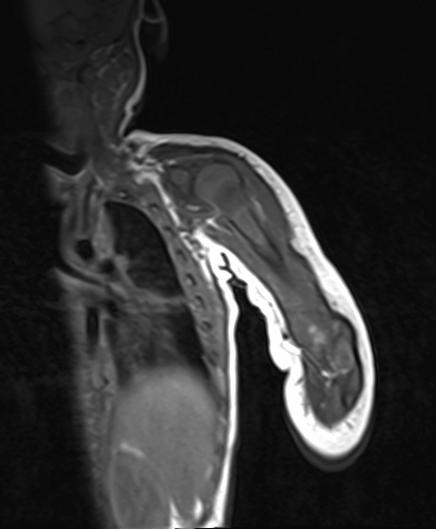 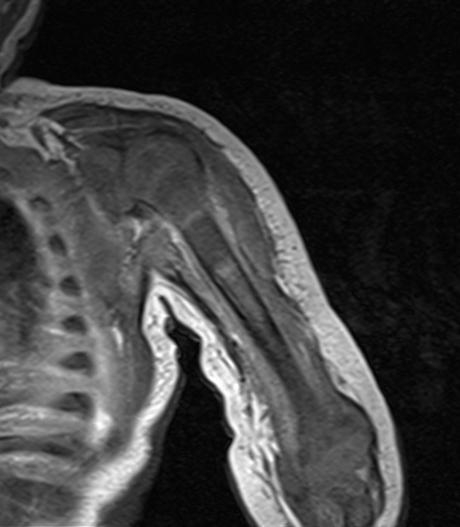 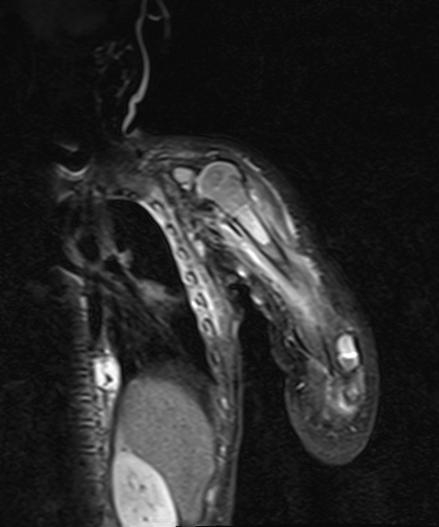 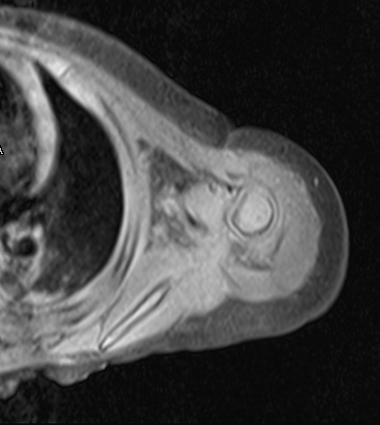 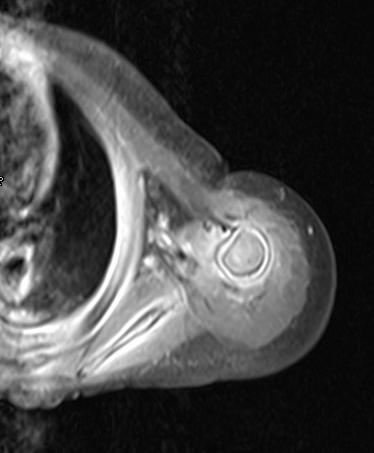 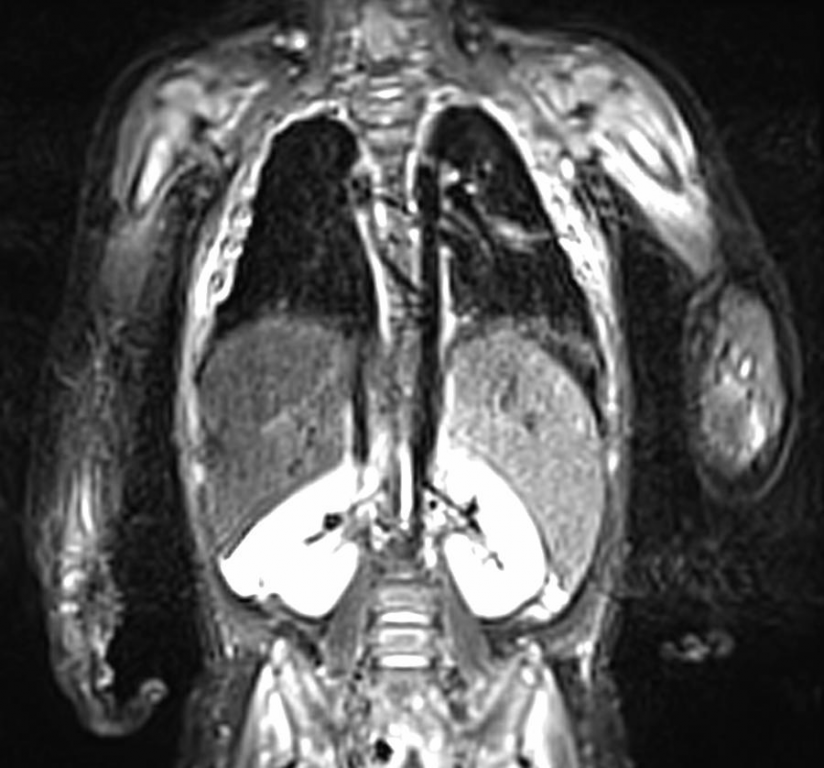