View full case Show related cases Notify admin
Clinical History
We present a case of a 46 year old man with an acute occlusion of left vertebral artery (VA) and vertebrobasilar junction secondary to artery dissection treated with intra-arterial thrombolitic therapy.
Differential Diagnosis List
Log in to take the quiz and to see the final diagnosis
Occlusion of vertebral artery and vertebrobasilar junction secondary to dissection
Imaging Findings
A 46 year old man presented to us in coma state since the morning of the same day after a cervical accident. He presented with GCS 6 and NHISS 38. Nothing interesting in anamnestic history. CT did not show acute focal lesions; MR and Angio-MR of the extracranic vessels showed that the left VA and vertebrobasilar occlusion was secondary to artery dissection. Angiography was performed to evaluate the possibility of intra-arterial thrombolitic therapy. The injection in left VA showed a complete occlusion of the vessel in preforaminal region (V1); the injection in right VA showed hypoplasia and occlusion of vertebrobasilar junction due to thromboembolism. It was decided to do a local regional thrombolysis with tissue plasmogen activetor (rtPA) performed through a catheter positioned in the cervical region of right VA together with a microcatheter and a microguide until the junction (Fig1). Angiographic control after 24 hours showed regular recanalization of the basilar artery axis and confirmed the hypoplasia of right VA in V4 region (Fig 2). The patient was treated initially with heparin (i.v.) and after 24h with cardioaspirin, calcic heparin and mannitol (i.v.). MR after 6 days showed recent ischemic area in the pons region at right, left prevalence in superior cerebellum region and complete recanalization of left VA, vertebrobasilar junction and cerebral posterior arteries (Fig 3). At dismissal, the patient was alert, presented moderate dysarthria, paralisis of left VII cranic nerve, paralisis and hypoesthesia of right arm (GCS 15; NHISS 14). After 3 months he presented moderate disability.
Discussion
The vertebral artery (VA) originates from the A. subclavia and enters the costotransverse foramen of C6 or C5. Emerging from the transverse foramen of C2, it arches around C1 to enter the foramen magnum. Then it sends off the posterior inferior cerebellar artery (PICA), supplying the inferior surface of the cerebellum, vermis, and the lateral surface of medulla. The two VA unite at the level of the pontomedullary junction to form the basilar artery. Basilar artery occlusive (BAO) disease is a devastating disorder with a mortality rate of 75-90%. Vertebrobasilar arterial disease accounts for 5-10%of all strokes. Postmortem VA dissections showed VA thrombosis in 18 of 45 patients with symptoms suggestive of posterior circulation infarctions. The majority of brain stem infarcts are caused by BAO. The pathogenesis in younger patients is usually embolism from cardiac sources or less frequently from vertebral artery dissection. Local atherothrombosis is more common in elderly patients [3]. One of the most common sites of atherothrombotic stenosis in the posterior circulation is the origin of the VA [1]. A thrombus formed at this site frequently extends into the basilar artery.The most frequent site of occlusion within basilar artery territory is the caudal region. This region is defined as the part of basilar artery between the confluences of VA to the origin of AICA. Rare causes of vertebrobasilar insufficiency include fibromuscular dysplasia, temporal arteritis, migraine, neck manipulation or accident and intracranial arterial dolichoectasia (IADE).The initial symptoms were headache, dizziness, confusion or coma. Other symptoms included dysarthria and unilateral paresthesias. Frequent findings in these cases were pupillary abnormalities, abnormal ocular movements, facial palsy, hemiplegia/ quadriplegia and bilateral extensor plantar responses. Added manifestations included abnormal eye movements (48%), cerebellar dysfunction(40%), altered level of consciousness (32%), visual field defect (20%), and pupil anomalies (16%). Approximately 10-15% of patients with BAO will manifest signs of the locked-in syndrome. MRI, MRA and conventional arteriography are the main diagnostic tools used in detecting infarcts and occlusions of the basilar artery. Arteriography, showing the extent of arterial occlusion, plays a significant role in the decision-making process [1]. The spontaneous recanalization rate in basilar occlusions is not known. The natural history of basilar occlusion is poor with mortality ranging from 40-86%. Clinical factors that increase the risk of death include older age, coma, quadriparesis, time from stroke onset, presence of basilar atherosclerosis and absence of basilar artery collaterals. The basilar artery likely does not reopen spontaneously any more often than 20% within a clinically meaningful time window. BAO is a potentially treatable condition. Several therapeutic options are presently available, including IV and IA thrombolysis, angiographic stenting and mechanical extraction of thrombus. IA thrombolysis is a potentially beneficial treatment, as there is a large volume of salvageable brain tissue even in patients presenting with moderate to severe symptoms (1). IA thrombolysis likely significantly increases recanalization to 67% considering multiple case series. Recanalization is significantly associated with increased survival (absolute decrease in mortality of nearly 50%)and the clinical outcomes in survivors is favourable in 57-71% [2].
References 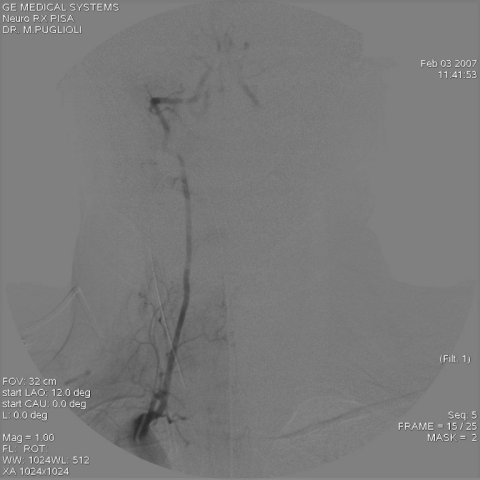 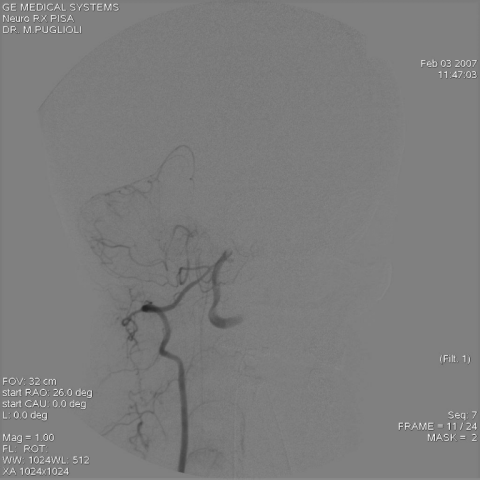 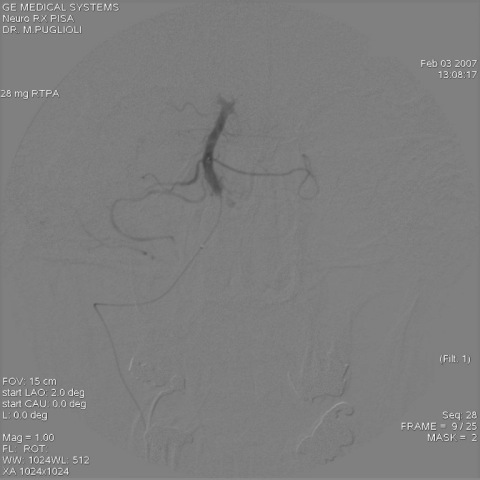 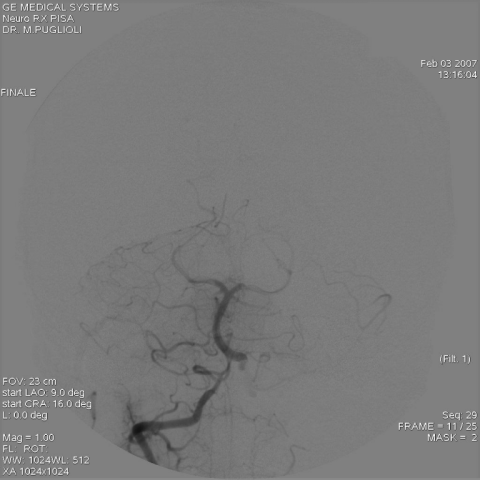 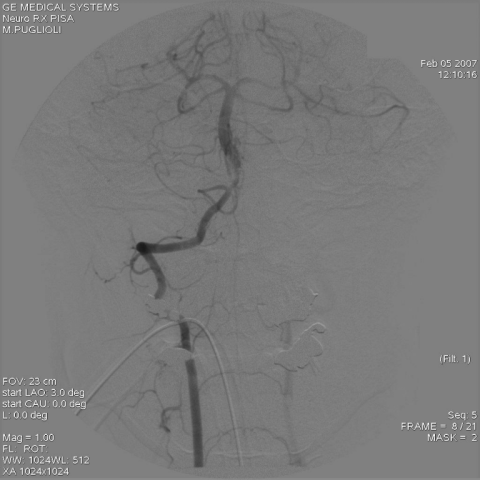 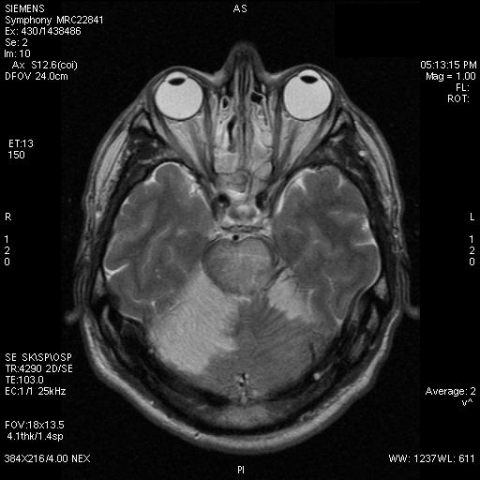 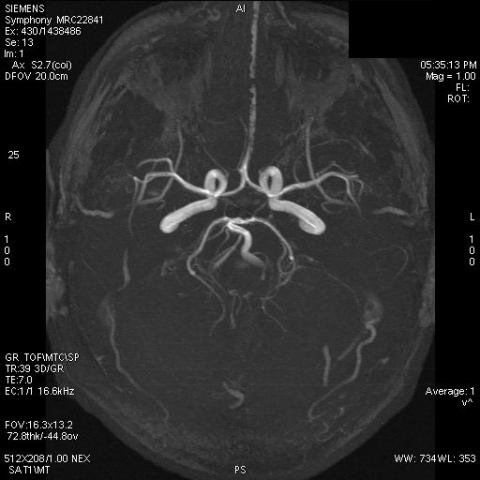 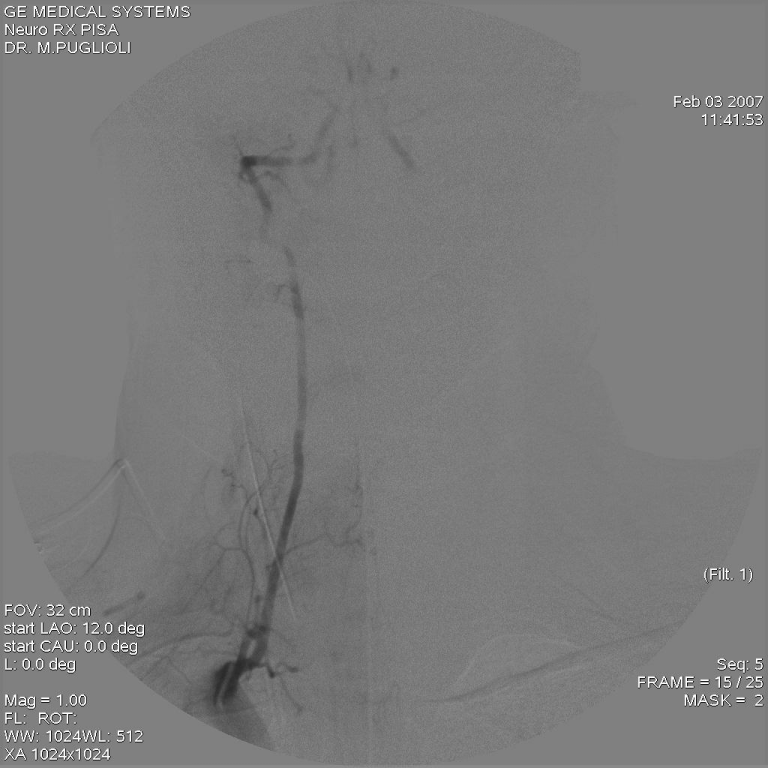 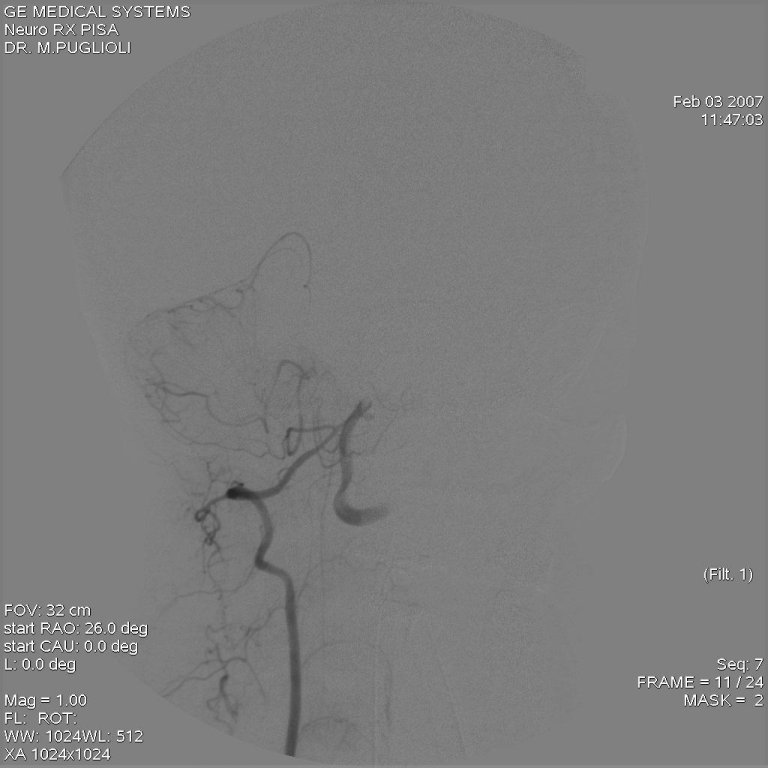 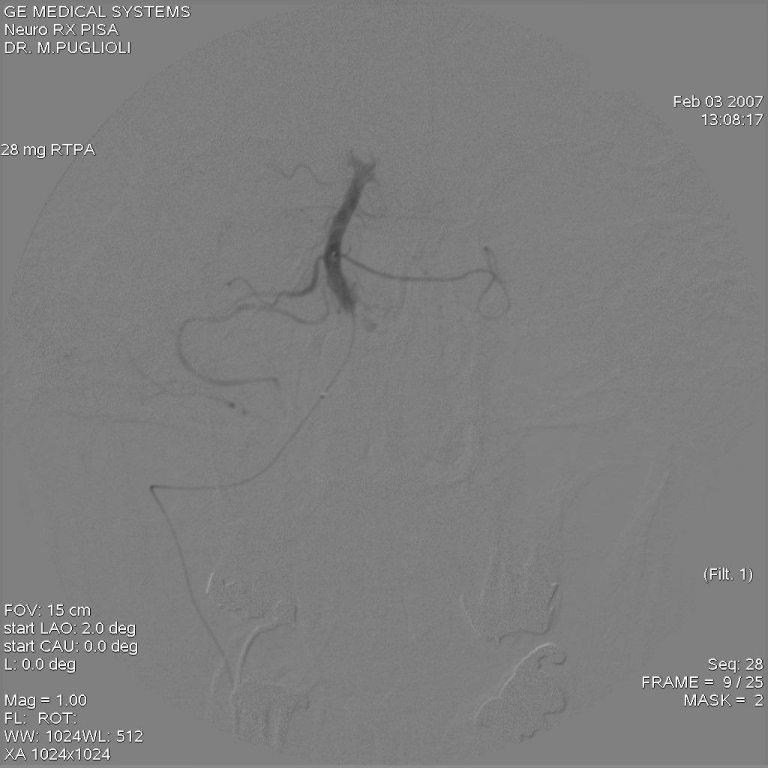 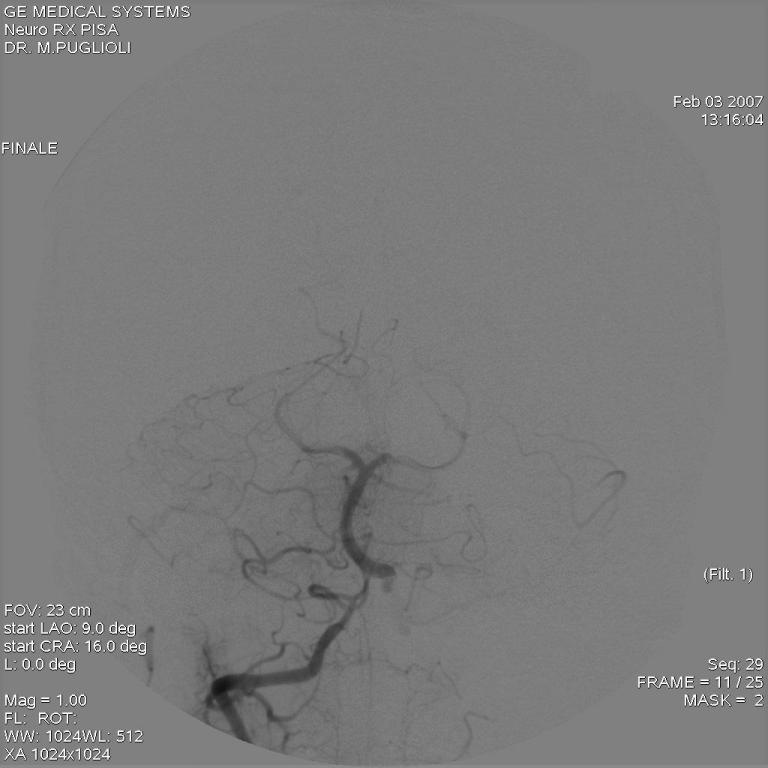 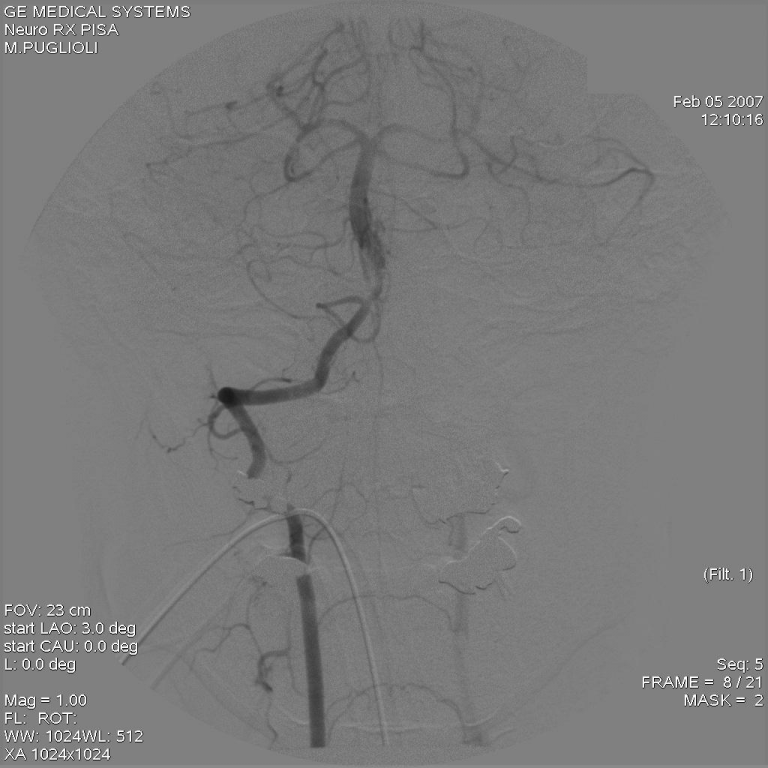 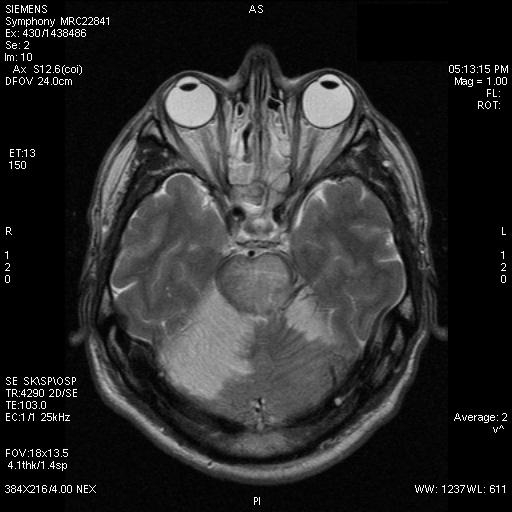 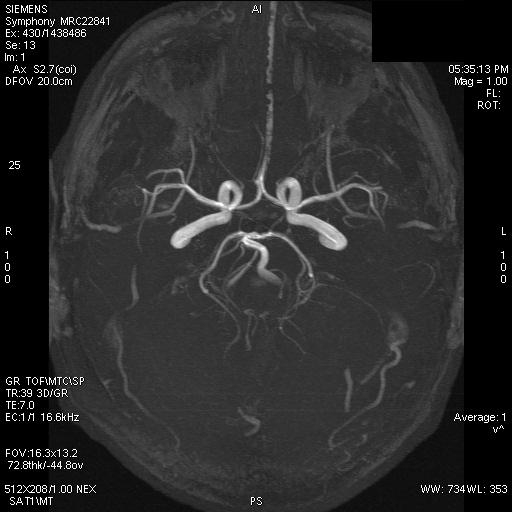