Since 6 month, a female patient presented buttock pain with intermittent left sciatalgia which partially recovered to NSAI and steroid therapy. No medical history of tumor. She underwent a skeletal scintigraphy, pelvic and tibial plain films, SCT and MRI of the pelvis.

Since 6 month, a female patient presented buttock pain with intermittent left sciatalgia, which partially recovered to NSAI and steroid therapy. No medical history of tumor. She underwent a skeletal scintigraphy (fig 1a) which showed multiple spots of hyperactivities located in the sacrum, proximal right tibia and distal left tibia. Subsequent plain films of the pelvis and both tibia revealed bilateral osteosclerotic changes and a mixte pattern of osteosclerotic and osteolytic changes involving the distal part of the left tibia, with a coarse trabecular pattern and widening of the distal shaft and tibial epiphysis (fig 1b). The wedge advancing lucency in the distal tibial shaft with cortical thickening was recognized and is pathognomonic of Paget’s disease, which was in this case multifocal. Because of pain in the buttock, a SCT scan of the pelvis was performed, which confirmed Paget’s disease involving the sacrum and identified an osteolytic area in the upper part of the left sacral bone with an extension into adjacent small parts anteriorly and inferiorly in the pelvis (fig 2a-c). A concomitant MR examination of the pelvis was performed, which confirmed the extension of the disease (fig 3a-d).

Paget’s disease is of unknown origin, a possible viral origin from a measles virus has gained support recently. It affects 3% of the population over 40 years of age, and is present in 10% of patients over 80. It affects more frequently men than women. This disease evolves through various phases of activity. It begins with an intense osteoclastic activity with bone trabeculae destruction. The osteolytic phase, which is termed in cranial vault, "osteoporosis circumscripta", is seen most frequently in frontal or occipital region. In the tubular bone, this phase begins in the subchondral epiphysis and extends subsequently into the metaphysis and diaphysis as a V- or wedge-shaped radiolucent area. The involved bone frequently is enlarged. As the disease progress, superimposed area of bone sclerosis is observed with cortical thickening, enlargement of bone and coarsened trabeculae. Paget’s disease predominates in the axial skeleton, involving the pelvis (30-75%), the sacrum (30-60%), and the spine (30-75%) especially the lumbar segment and the skull (25-65%). Long bones particularly affected, are the femur (25-35%), the humerus and the tibia. Complications of Paget’s disease are fractures (on the convex side of deformed long bones) and sarcomatous degeneration which can develop in less than 1% of persons. The histologic features of osteosarcoma are apparent in approximately 70% of patients with pagetic sarcoma, the remainder exhibit fibrosarcoma (20-25%) or chondrosarcoma (5-10%). The most common sites of occurrence are the femurs, followed by proximal humerus, pelvis and tibia. Most patients present with a history of rapidly progressive swelling in the affected area associated with a significant worsening of any chronic local pain they experience with their disease. An abrupt raise of alkaline phosphatase, even if it is not a reliable tumor marker, should raise the suspicion of malignant transformation of a pagetic lesion. Especially when an X-ray examination of the involved area shows an ill defined osteolytic lesion of the medulla with an extension in the soft tissues. MRI demonstrates soft tissue extension of the tumor in 90% of cases. In this case, the osteosarcomatous degeneration in the sacrum was proven by a needle biopsy. An 18G needle, over a guiding wire, was used. Histology revealed large atypical cells with spindle form, encased by an amorphous tissue compatible with osteoide tissue. At immunohistochemistry, it was negative for Ac anti-prot S-100, which suggested the diagnosis of osteogenic osteosarcoma. To conclude, in a bone affected by Paget’s disease, the combination of osteolytic area extending into the adjacent small parts should raise the suspicion of sarcomatous transformation until proven otherwise. 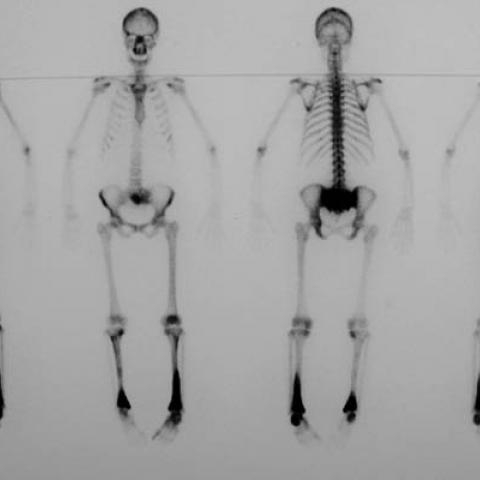 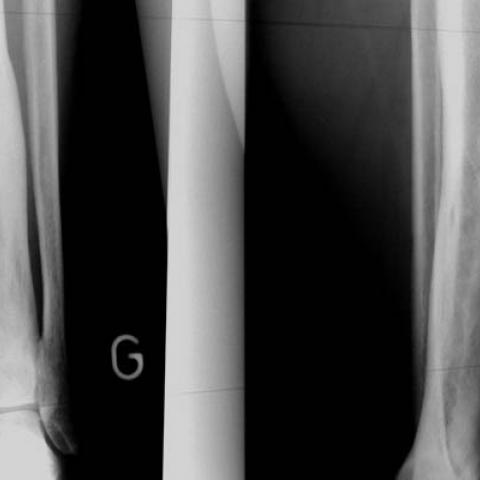 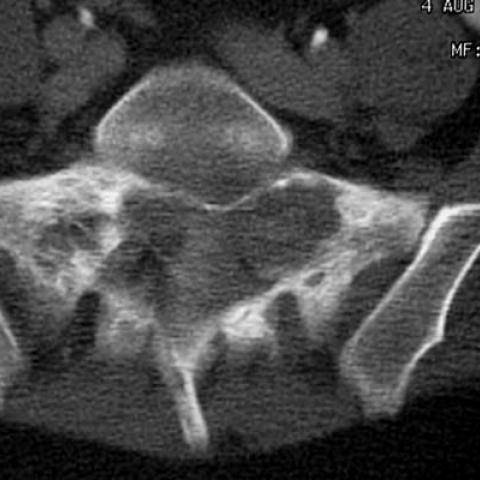 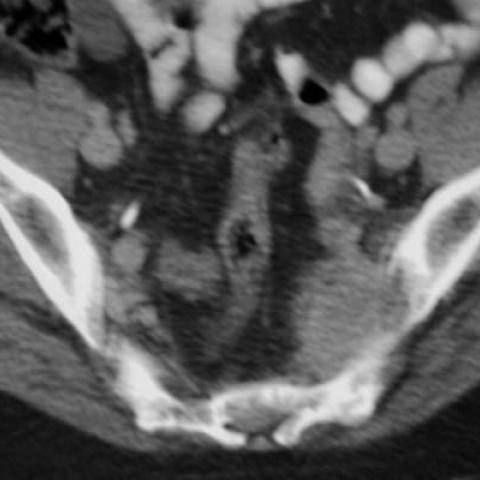 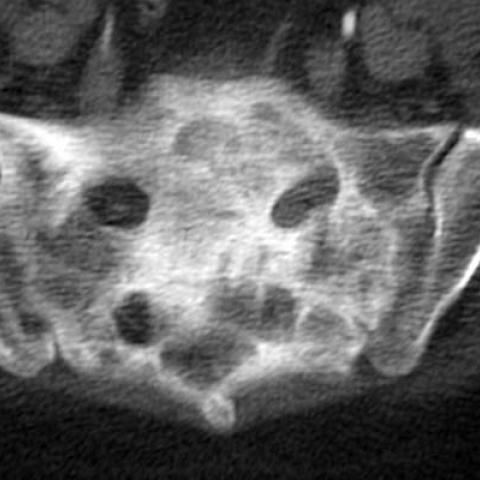 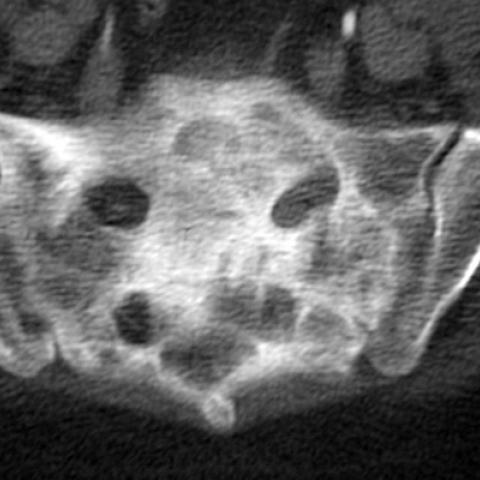 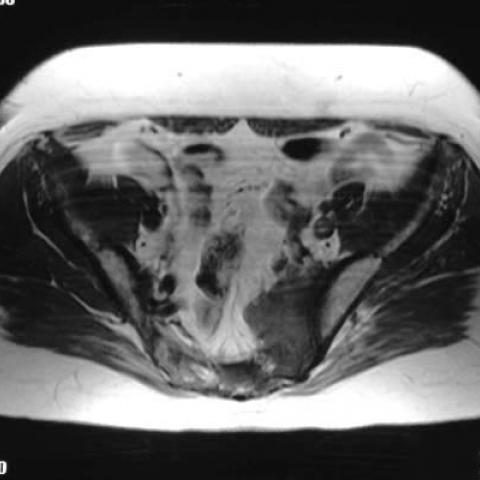 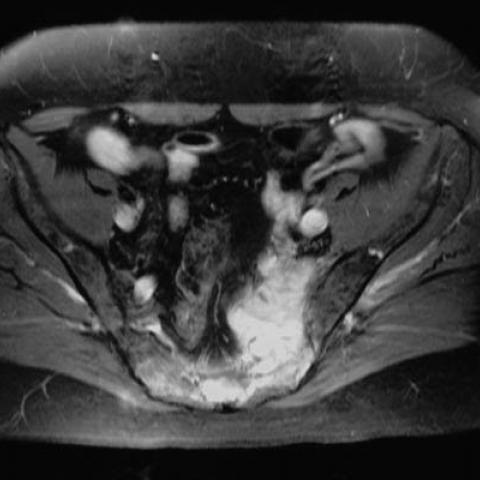 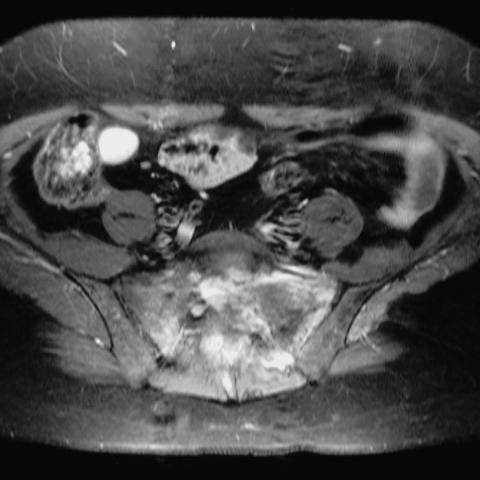 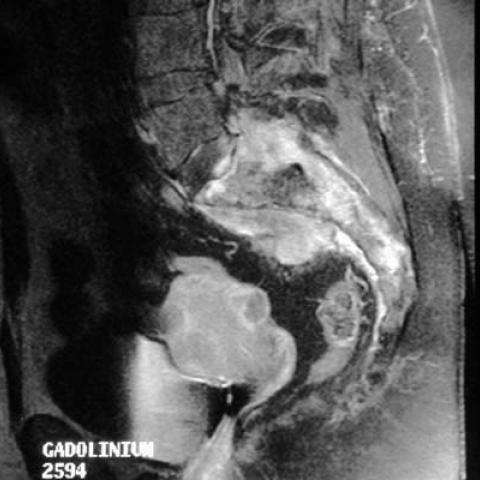 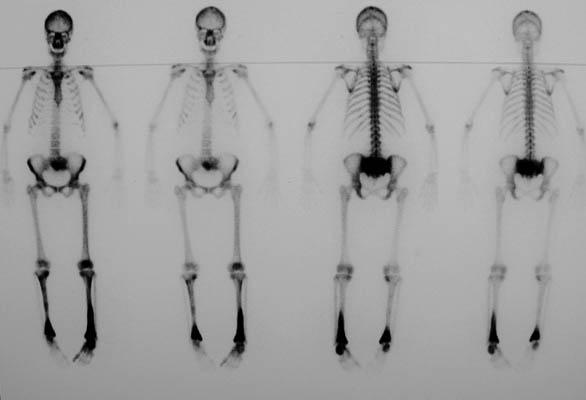 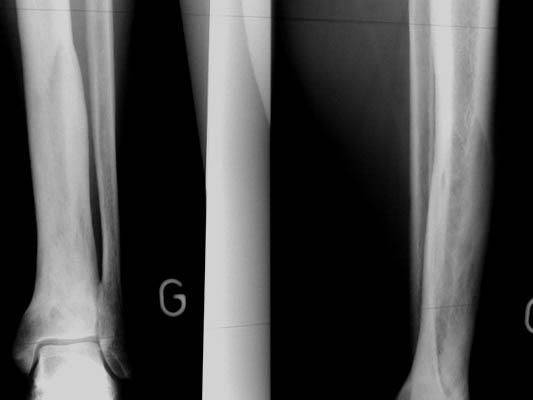 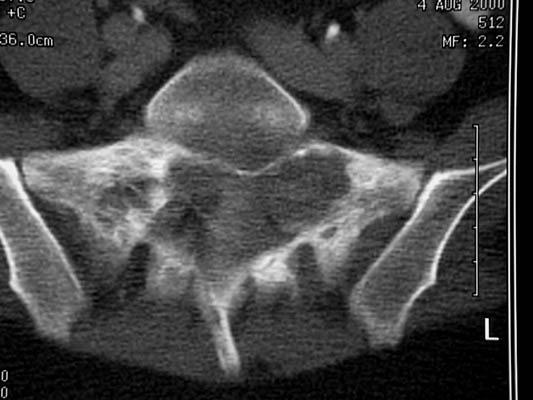 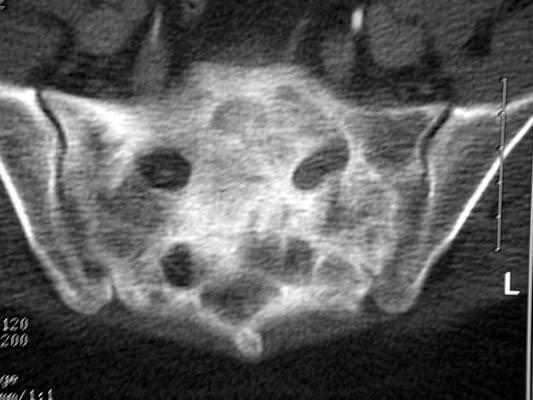 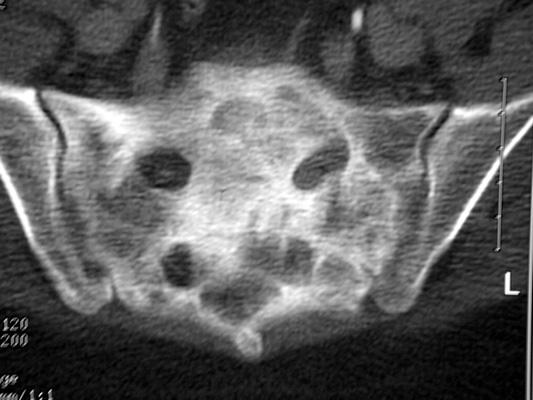 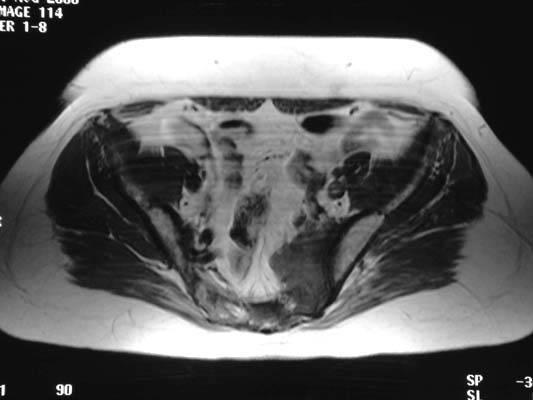 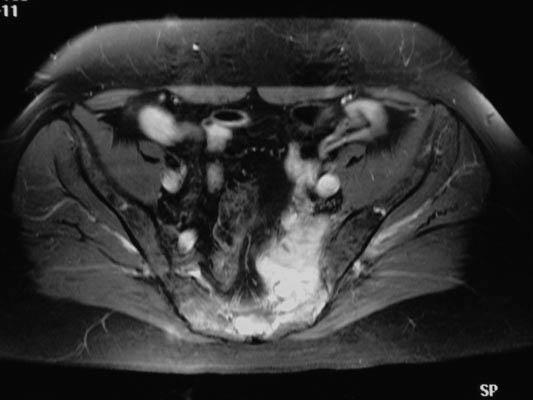 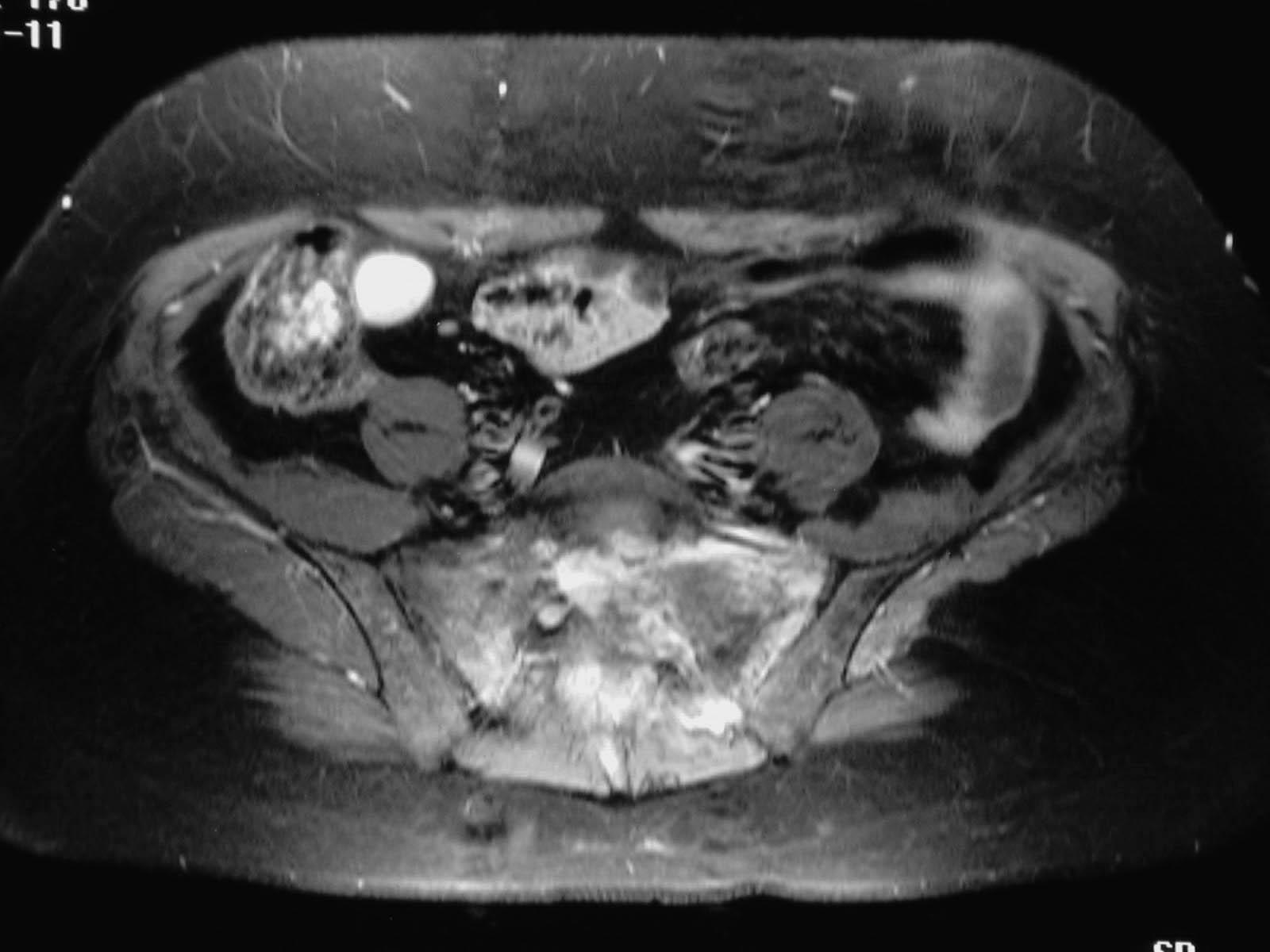 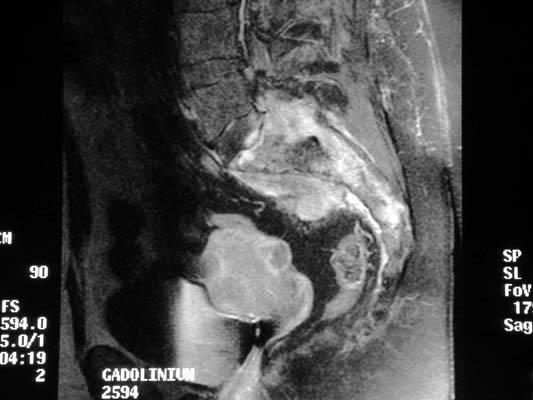