Categories
No Area of Interest ; Imaging Technique Digital radiography, CT ;
No Procedure ; No Special Focus ;
Show more Show less
View full case Show related cases Notify admin
Clinical History
Three cystic lesions within the right lung were found by radiologic imaging in a 1-day-old male presenting respiratory distress syndrome.
Differential Diagnosis List
Log in to take the quiz and to see the final diagnosis
Congenital cystic adenomatoid malformation
Imaging Findings
A 20-year-old gravida 1 was followed during her first gestation. Sonographic examination at 31 weeks menstrual age revealed a singleton fetus with a cystic structure at the right hemithorax measuring 44 mm × 26 mm. Birth weight was 3050 g. Because of the distress syndrome, the child was reanimated by means of physical stimulation (SIMV) and intubated. At the first day chest x-ray demonstrated three cystic lesions within the lung (Fig.1). The second day CT scan revealed a multiseptated cyst, adjacent to the RML and RLL (containing air and fluid) and a small pneumothorax (Fig 2). The patient was operated on day 5; the cyst was resected without further complications.
Discussion
CCAM of the lung is a rare lesion that is felt to result from failure of the respiratory or mesenchymal portion of the lung to canalise and join the bronchial or endodermal portion. Many consider it a developmental abnormality (hamartoma) arising at the seventh week of gestation from overgrowth of the terminal respiratory bronchioles modified by intercommunicating cysts. This disorder accounts for 95 % of congenital cystic lung diseases. Occurrence is sporadic unrelated to race, maternal age, or familial genetic history. The blood supply is via the pulmonary system. CCAM is almost always unilateral, involving a single lobe, with no lobar predominance. The manifestation of CCAM has typically been described as neonatal respiratory distress (75%) and cyanosis caused by progressive expansion of the lesion. In cases with less extensive involvement or without associated anomalies (10%), presentation may be delayed until late childhood or adulthood, when incidental discovery or episodes of recurrent infection reveal the lesion. Approximately 50% of affected infants are born premature and 15% are stillborn. Treatment is surgical even in asymptomatic infants to prevent infection and due to the low, but potential risk of developing rhabdomyosarcoma within the lesion. Prenatal resection of a CCAM can also be performed and may result in improved survival in fetuses that develop hydrops. Findings on prenatal US include polyhydramnios, fetal hydrops, and ascites which is a result of venous obstruction by the cystic or solid intrathoracic mass. There are three main types of CCAM, but mixed lesions have also been described: -Type 1: This is the most common (50-70%) and it has the best prognosis. Typically there are multiple large or a single dominant cyst (over 2.0 cm in diameter). Chest x-ray shows an intrapulmonary mass of soft tissue density with scattered radiolucent areas of varying size and shape, usually with a mediastinal shift and pulmonary herniation. Placement of a radiopaque feeding tube into the stomach helps in the differentiation from diaphragmatic hernia. -Type 2: This is the next common (20-40 %) and consists of multiple small cysts (0,5–2cm) resembling dilated simple bronchioles. This form is often associated with other, usually lethal, congenital anomalies (60%), especially renal agenesis or dysgenesis, cardiac malformations, and intestinal atresia. -Type 3: This form is rare (up to 10%) and is characterized by dilated bronchial-like structures that appear as a bulky, firm mass. This type is associated with a poor prognosis secondary to pulmonary hypoplasia. This form may appear as a solid homogeneous mass filling the hemithorax and causing a marked mediastinal shift. The diagnosis is suggested from the clinical findings, chest radiograph, and CT but can be confirmed only following surgery. The radiologic appearance of lesions varies with time due to retained fluid secretions or superinfection. Initially the cysts may be fluid-filled, after a day or two the fluid is resorbed and the cysts become air-filled. CT findings include small or large cysts. The cysts may be fluid-filled, air-filled, or contain air-fluid levels. CT scan can detect areas of consolidation with heterogenous attenuation on enhanced scans and areas of low attenuation around cystic lesions (due to the presence of microcysts blended with normal lung parenchyma). Differential diagnosis of congenital cystic adenomatoid malformation includes mainly diaphragmatic hernia, cystic bronchiectasis, congenital lobar emphysema, intrapulmonary bronchogenic cyst, prior infection with pneumatocele formation, and other foregut malformations.
References 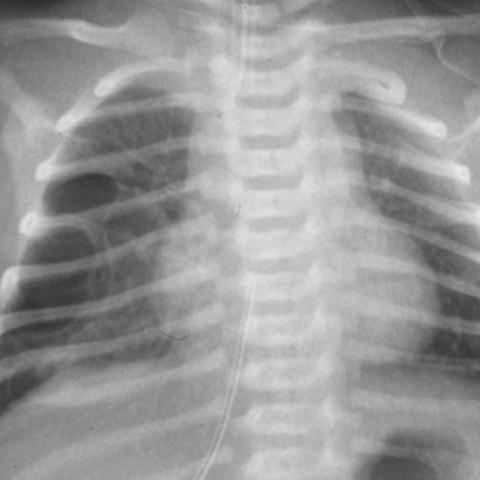 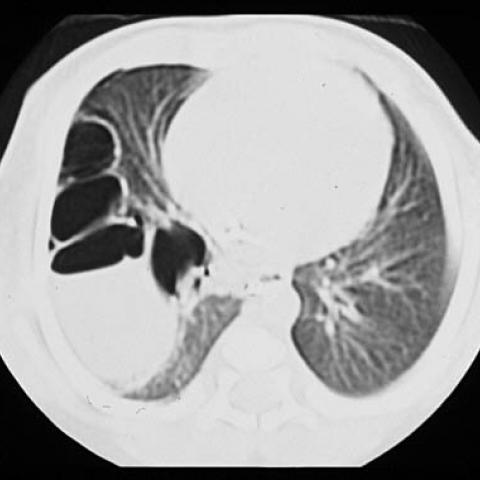 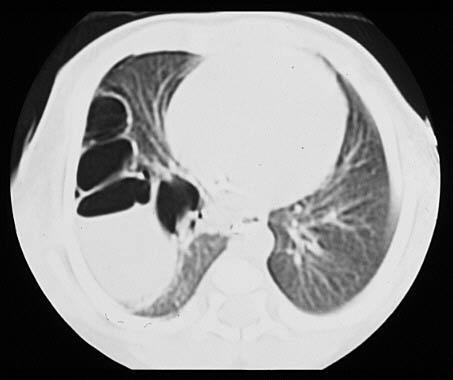