Download as PDF Print Show related cases Notify admin
Clinical History
A 66 year old woman presented with a 3 month history of weight loss and vague abdominal pain.
Imaging Findings
A 66 year old woman presented with acute abdominal pain and vomiting, with 3 months of weight loss and vague abdominal pains preceeding this. There was a poorly documented history of previous ulcerative colitis, which had required intermittent salazopyrin therapy. The prescence of ulcerative colitis was confirmed on a recent rectal biopsy. An abdominal xray (figure 1) showed proximal colonic and small bowel diatation, with a paucity of gas in the descending colon. Given the colonic obstruction, a single contrast barium enema was performed. This showed an irregular stricture in the distal transverse colon, with irregularity of the mucosa (figures 2 and 3), the features of which were suspicious for primary colonic carcinoma. Barium did not pass beyond the strictured segment. An ultrasound did not reveal any focal liver lesions, and a left hemicolectomy and primary anastomosis was performed. The macroscopic histological specimen showed an irregular stricture in the distal transverse colon, with numerous mucosal inflammatory polyps in the region of the stricture (figures 4). Microscopic examination showed gross thickening of the muscularis mucosa, with fibrosis of the lamina propria and submucosa, inkeeping with ulcerative colitis. The strictured segment revealed a myriad of inflammatory mucosal polyps, with multiple very well differentiated epithelial cystic structures within the submucosa, muscularis propria and subserosal tissue. The latter features were in keeping with colitis cystica profunda.
Discussion
Colitis cystica profunda is a rare, benign disorder of the rectum and colon. Despite the scarcity of the condition, it is important as it mimics primary colonic carcinoma. The underlying aetiology is poorly understood, although trauma and inflammatory conditions are thought to predispose. The condition is more common in early adulthood, especially in the 3rd and 4th decades of life. Symptomatically, the patients may suffer rectal bleeding, loss of mucus per rectum, and in severe cases bowel obstruction may supervene. On examination, a polypoid lesion may be palpable on digital rectal examination, the location of which is usually on the anterior rectal wall, typically within 12cm of the anal verge. Associated conditions include solitary rectal ulcer syndrome, rectal prolapse, and inflammatory bowel disease. Ulcerative colitis appears to be more common as an underlying disease process than Crohns disease. Pathologically, multiple cystic structures consisting of cuboidal epithelium, containing mucinous material, are seen in the submucosa, and may extend to penetrate the muscularis propria. Histological differentiation must be made from well defined mucinous adenocarcinoma of the rectum. Imaging studies may help with the diagnosis, although plain films, barium studies and CT may not provide information that aids in distinguishing this condition from primary carcinoma. Trans-rectal ultrasound has been used to show multiple cystic structures in the submucosa, a lack of local lymphadenopathy, and no invasion of adjacent structures. MR may also show the multiple cystic structures as high signal intensity lesions on T2 weighted sequences. Diagnosis of this condition from primary colonic carcinoma is important to direct appropriate therapy, which may be conservative in nature. This clinical case demonstrates an abnormal location of colitis cystica profunda (which made primary carcinoma the initial working diagnosis), and it is noted that only two other case report describe colonic involvement proximal to the sigmoid colon.
Differential Diagnosis List
Colitis cystica profunda
Final Diagnosis
Colitis cystica profunda
References 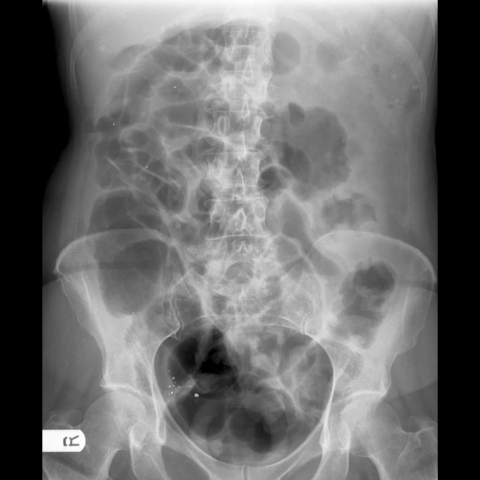 Abdominal xray. Small bowel and proximal colonic distension is noted, with a paucity of bowel gas in the descending colon.
Figure 2 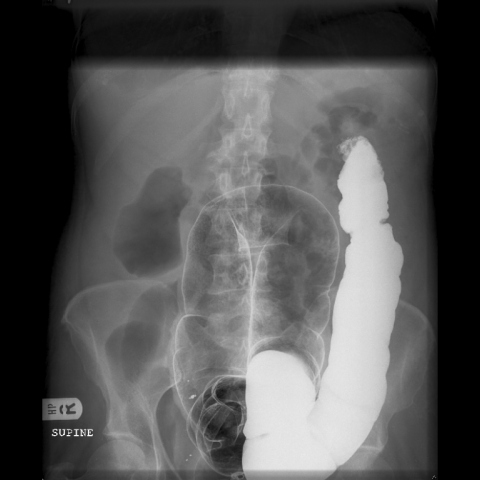 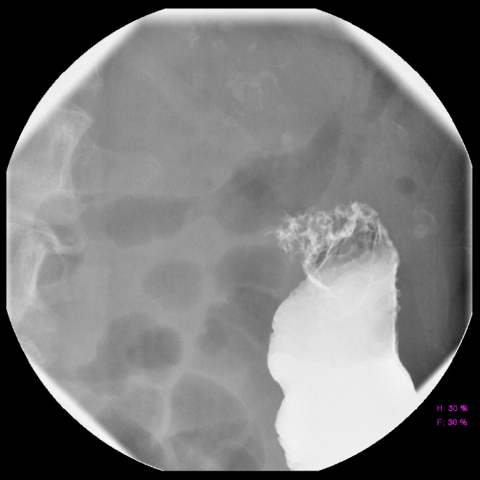 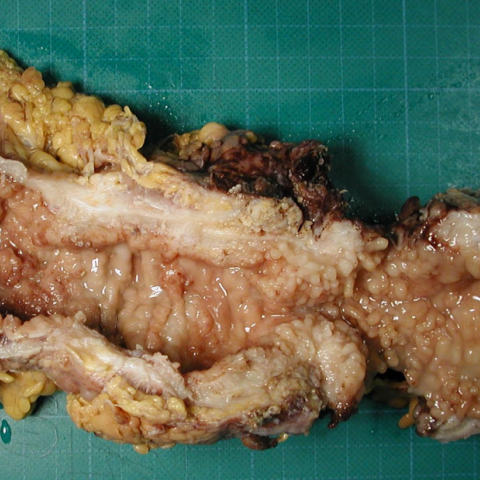 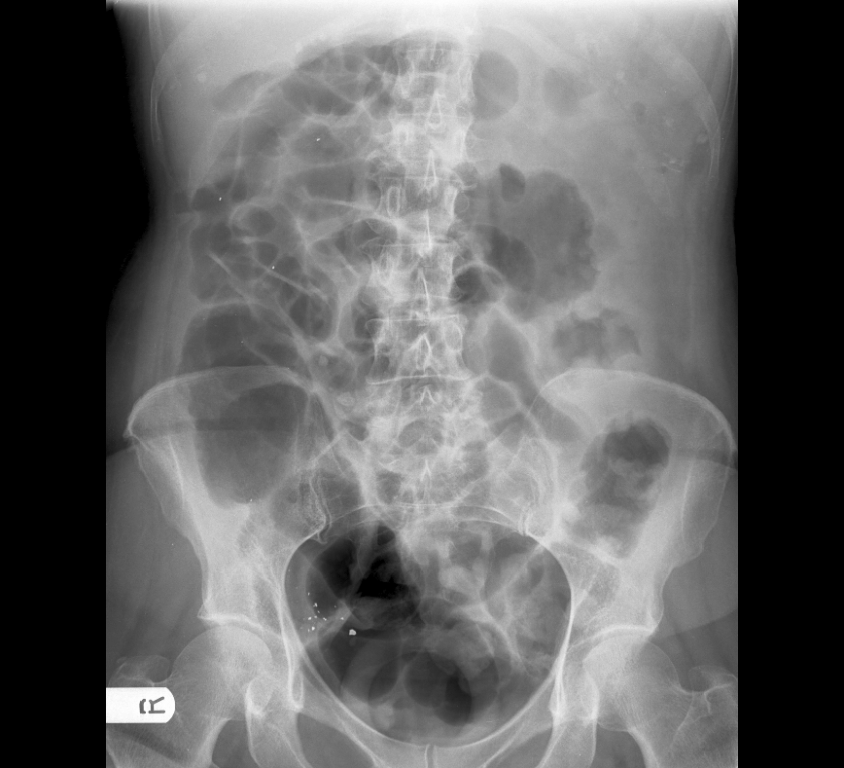 Abdominal xray. Small bowel and proximal colonic distension is noted, with a paucity of bowel gas in the descending colon. 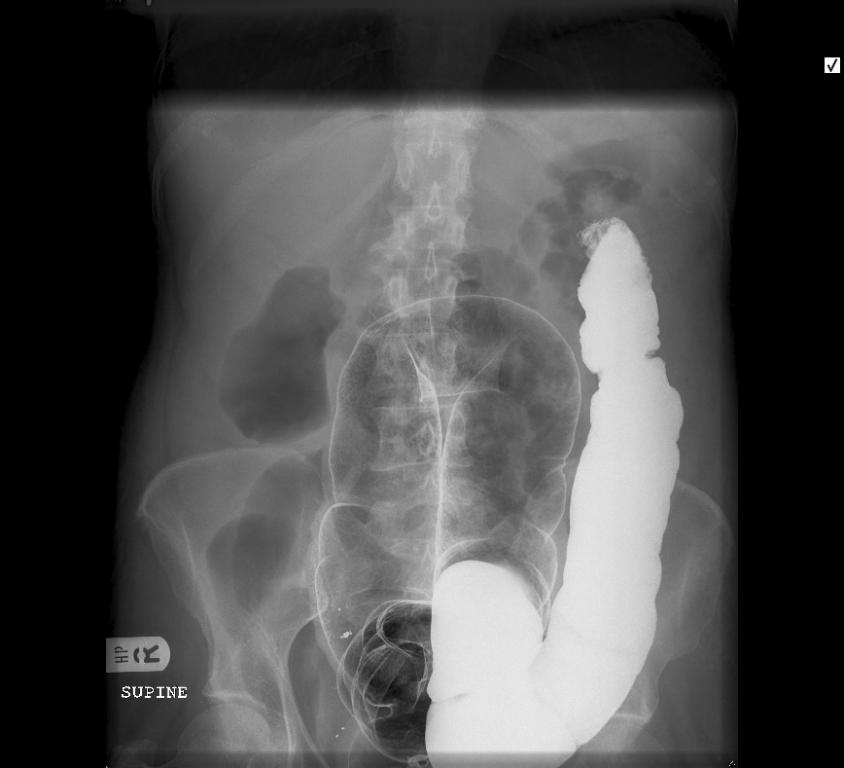 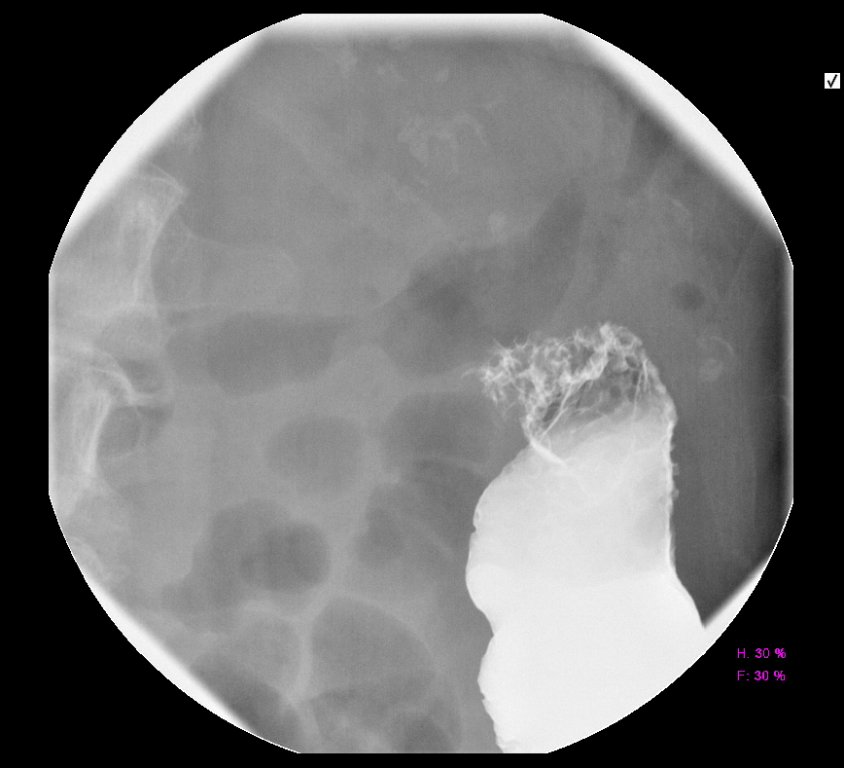 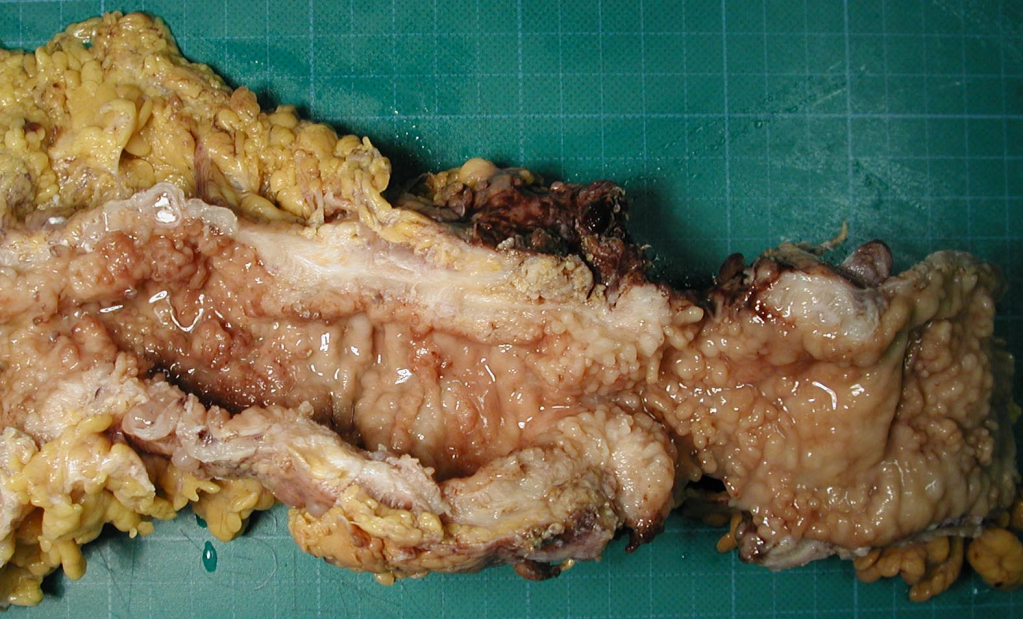