Categories
No Area of Interest ; Imaging Technique CT, CT
No Procedure ; No Special Focus ;
Show more Show less
Download as PDF Print Show related cases Notify admin
Clinical History
Radiographic and computed tomographic findings of a 21-year-old male patient with a painless waddling gait, were presented.
Imaging Findings
A 21-year-old male patient presented with a waddling gait, without pain. He had begin to walk at the age of two and a half years, and he had had a walking disorder since then. He was diagnosed as suffering from a sequel of developmental dysplasia of the hip (DDH) in his early childhood. The anteroposterior pelvic radiographs which were taken, showed that the proximal part of both femurs were displaced superiorly, but the development of both acetabuli was normal and the femoral heads were confined well within the acetabulum (Fig. 1). Axial computed tomographic (CT) images revealed normal femoral head and acetabular development in both hips, while femoral heads were within the acetabulum but the femoral shafts were displaced superoposterolaterally. Both femoral heads were partially osteoporotic and their contours were found osteosclerotic on the lateral fragmented site (Fig. 2). Three-dimensional (3D) reconstructed CT images clearly identified that the femoral shafts and femoral heads were completely separated from each other and there was no pseudoarticulation between the proximal femur and the iliac bone on both sides (Fig. 3).
Discussion
Coxa vara is a hip deformity caused by a decreased angle between the femoral neck and shaft to less than 120º as measured on an anteroposterior radiograph. The normal femoral neck-shaft angle in children changes with age. The femoral neck is valgus in the infant because of the relatively increased growth of the medial portion of the physis during the perinatal period, and the angle value is approximately 150º at the time of birth. During childhood, there is a greater amount of growth in the lateral portion of the femoral physis and the femoral neck-shaft angle, decreasing gradually to a value of 120º in the adults. Congenital coxa vara (CCV) is caused by an abnormality in the development of the proximal femoral physis, and defective ossification of the adjacent metaphysis that is influenced by weight-bearing which are responsible for the progressive decrease of the femoral neck-shaft angle. It is often bilateral and noticed when the child begins to walk. During early childhood, it presents with progressive, pain free gait abnormalities, and commonly follows a clinical course progressively with growth. The patients with bilateral CCV commonly present with waddling gait abnormalities. Histological studies have shown abnormalities in enchondral bone formation, which resemble those seen in metaphyseal chondrodysplasia, but are limited to the proximal femoral physis. On physical examination, hip abduction and rotation is found to be limited and there is a marked rising of the greater trochanter. Radiographically, the angle between the femoral shaft and the neck is found to be less than 120º. A characteristic finding of an inverted Y-shaped lucency is seen in the inferior part of the neck with the small triangular corner fractures. CT scans and 3-D reconstructed images may provide useful information for differential diagnosis and pre-operative surgical planning. MR imaging reveals that a widening of the physis has been demonstrated with the expansion of the cartilage. In untreated cases, progressive deformities also occur in the femoral head and the acetabulum, leading to the loss of hip function with the development of premature degenerative changes. We did not detect any remarkable degenerative changes in the present case. We thought that it may be related to the protection of the femoral head from weight-bearing, because of the complete separation of the femoral head and shaft.
Differential Diagnosis List
Congenital coxa vara.
Final Diagnosis
Congenital coxa vara.
References 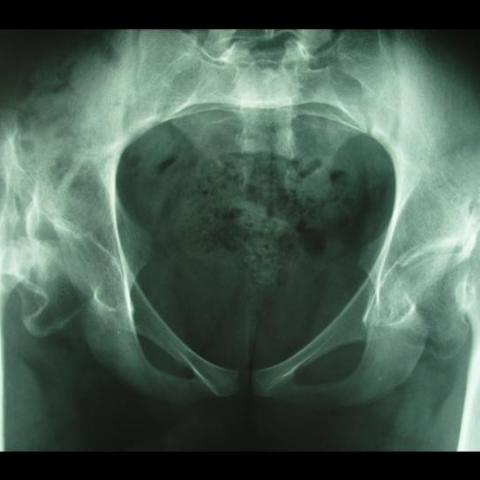 An anteroposterior pelvic radiograph showing the superiorly displaced proximal part of both femurs and femoral heads located within the acetabulum.
Figure 2 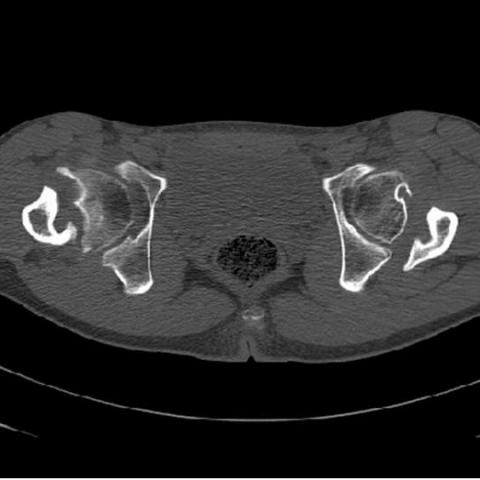 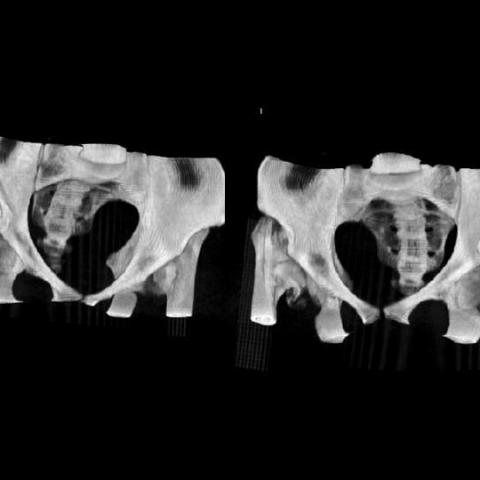 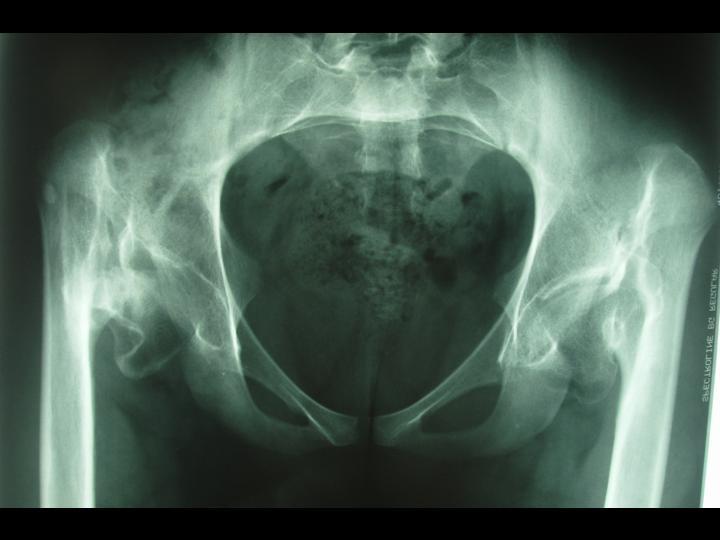 An anteroposterior pelvic radiograph showing the superiorly displaced proximal part of both femurs and femoral heads located within the acetabulum. 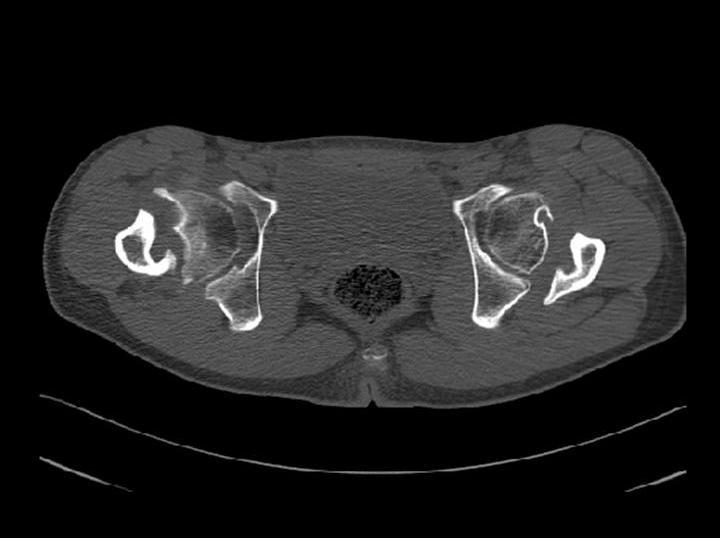 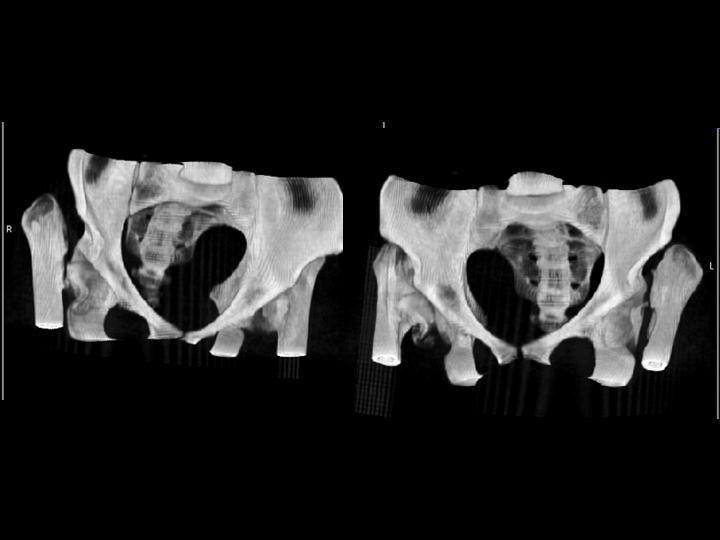