Download as PDF Print Show related cases Notify admin
Clinical History
The patient was presented with a history of projectile, non-bilious vomiting in the fifth week of life.
Imaging Findings
The patient was presented in the fifth week of life with a two-week-history of vomiting. The infant predictably vomitted non-bilious fluid in a projectile manner following feeds. A clinical examination was done, which was found to be unremarkable. No abdominal mass was palpated. An ultrasound of the abdomen was performed to confirm the suspected diagnosis. This demonstrated a sausage-shaped mass in the epigastrium, consistent with a congenital hypertrophic pyloric stenosis. The pylorus had a muscle thickness of 5 mm, channel length of 20 mm and muscle length of 24 mm. The child received subsequent surgical management.
Discussion
Congenital Hypertrophic Pyloric Stenosis (CHPS) is caused by a hypertrophy of the circular muscle layer of the pylorus. It is four times more common in males than in females. The incidence ratio is 1:1000. The aetiology is unknown. It typically presents with a non-bilious vomiting following feeding. The patients may be severely dehydrated and have electrolyte disturbances, including alkalosis and hypokalaemia. The peak incidence occurs at 3–6 weeks and it does not present after 3 months. Typically, an "olive" shaped mass is palpated in the epigastric region, although this finding is limited to approximately 50% of the cases. An ultrasound is the imaging modality of choice, but it is highly operator dependant. Since the sonographic features of CHPS were first reported, the diagnostic accuracy has increased as a consequence of the employment of various objective criteria. Hypertrophy involves the circular muscle layer, resulting in narrowing and obstruction of the pyloric channel. The measurements quoted as being diagnostic of CHPS include pyloric muscle thickness >3 mm, pyloric channel length >14 mm and muscle length >16 mm. The total transverse diameter of the pylorus has been shown to be an unreliable predictor of CHPS. Muscle thickness is measured from the base of the echogenic submucosa to the outer edge of the hypoechoic muscle layer. Muscle length is measured from the point of transition of the antropyloric muscle (from normal thin gastric muscle to thickened antropyloric muscle) to the end of the thickened pyloric muscle. Pyloric channel length is measured along the elongated narrowed portion of the gastric outlet. Muscle thickness is considered the most important measurement. Some authors maintain that absolute measurements are less important than the overall morphology and real time appearances. Although muscle thickness varies with time, in CHPS it should consistently measure >3 mm. The accuracy of diagnosis approaches 100% in skilled hands. The treatment is surgical by adopting the Ramstedt pyloromyotomy procedure. This involves dividing the hypertrophied muscle layer and leaving the mucosal layer intact. This can be performed by an open or a laparoscopic means.
Differential Diagnosis List
Congenital hypertrophic pyloric stenosis.
Final Diagnosis
Congenital hypertrophic pyloric stenosis.
References

An ultrasound image of the long axis of a hypertrophied pylorus 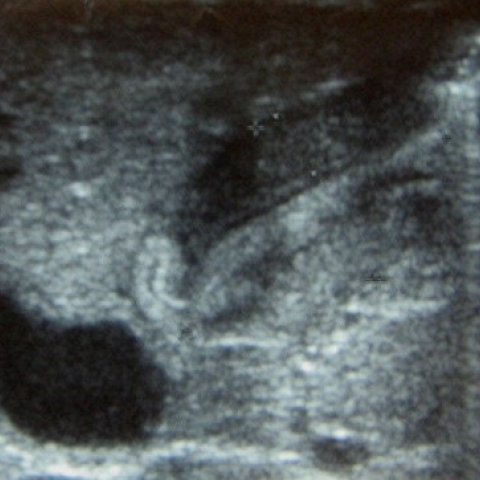 An ultrasound image showing the longitudinial hyperechoic mucosa located centrally. The thickened hypoechoic mucosa is seen on either sides.

An ultrasound image of the long axis of a hypertrophied pylorus 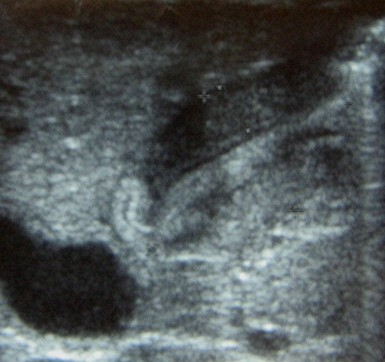 An ultrasound image showing the longitudinial hyperechoic mucosa located centrally. The thickened hypoechoic mucosa is seen on either sides.