Then, CT and MRI were performed. On CT (Siemens Somatom Plus 4, Erlangen, Germany), there was a multilocular cystic lesion with a solid component posteriorly, which was heavily calcified, in the left part of the anterior mediastinum (Fig. 2). The mass was about 6cm x 7cm x 11.5cm in size. Left pleural effusion was present. After contrast injection, mild rim enhancement was seen. MR imaging (Siemens Magnetom Open, Erlangen, Germany) showed a large nonhomogeneous mass with areas of both high and low signal intensity, depending on the composition of the tumour (Fig. 3). Fat-suppression T2-weighted images revealed that tumour had little fatty component. Rim-like calcification was barely seen and no invasion to adjacent soft tissues was detected.

The patient underwent surgery. Histological diagnosis was mature cystic teratoma. In this patient, high levels of amylase and lipase were available in the cystic fluid, 701U/land 2256U/l respectively. However, the levels of CA 19-9 (>50,000U/ml), CA 125 (231U/l) and CEA (107ng/ml) were also high in the cystic fluid. Cultures of the cystic and pleural fluids were negative. The postoperative course was uneventful. After two-year follow-up, no recurrence or metastasis was detected.

Discussion
Mature teratomas are neoplasms consisting of well-differentiated adult tissue of all germinal layers. They occur most commonly in the gonads. Extragonadal teratomas are located along the body midline in such locations as the cranial cavity, mediastinum, retroperitoneum, and sacrococcygeal region [1].

Mediastinal mature teratomas usually occur in the anterosuperior mediastinum. They occur in all age groups but are most often diagnosed in young adults. No sex predilection exists. 53% of patients have no symptoms at the time of diagnosis; the tumour is found incidentally on chest radiographs. When symptoms are present, they include chest pain, dyspnoea, and cough [1]. Surgery should be performed whenever complications, such as atelectasis of lung tissue, adhesion to or compression of adjacent structures, rupture, or malignant transformation, are present. Up to 36% of all mediastinal teratomas may rupture, most frequently into the lungs and bronchial tree, followed by the pleural space, pericardial space, or great vessels [1]. The signs and symptoms of a ruptured teratoma vary with the structures involved.

Similarly, radiological manifestations of ruptured teratomas are variable. CT often shows a combination of fluid-filled cysts, fat, soft tissue, and areas of calcification. This pleomorphic appearance is an important clue to the diagnosis and often makes it possible to distinguish these lesions from thymoma and lymphoma. Calcification is seen in from 20% to 80% of cases, being focal, rim-like, or rarely representing as teeth or bone. Fat is visible on CT in half of cases, a finding that is highly suggestive of this diagnosis. A fat-fluid level within the mass is particularly diagnostic. The fluids within the cystic parts of the tumors also vary in their CT density and may reach soft-tissue density. Teratomas are typically encapsulated and well-demarcated, and rim enhancement can be seen.

Differential radiological diagnosis between benign and malignant teratomas is sometimes difficult, especially when the mature teratoma has ruptured. In malignant teratomas, CT or MRI may reveal lesions with spiculated borders, thick capsules, heterogeneous contents, fat plane obliteration around the tumour, or direct invasion into the adjacent structures with or without effusion. These findings are sometimes mimicked by ruptured teratomas; however, a sudden onset of symptoms after rupture may be a clue in making the correct diagnosis.

Regarding the rupture process of mature teratomas, several hypotheses have been proposed [2]. The most acceptable one has been attributed to the presence of digestive enzymes secreted by pancreatic tissue, salivary gland tissue, or intestinal mucosa within the tumours leading to rupture into adjacent structures. High amylase activity in pleural effusion or in the tumour contents was reported [2]. The other hypotheses of chemical inflammation, ischaemia, pressure necrosis and infection seem unlikely causes of mediastinal tumour rupture. In this case, high levels of amylase and lipase were detected in the cystic fluid, which might lead to noninfectious inflammation and rupture. Cultures of the cystic fluid and pleural effusion were negative. However, some tumour markers, especially the CA 19-9 level, were high in the cystic fluid.

CA 19-9 has been established as a sensitive tumour marker in a variety of malignant diseases, especially in carcinomas of the exocrine pancreas. But, many benign diseases causing abnormal values, such as pulmonary sequestration, mediastinal bronchogenic cysts, and mediastinal mature teratomas, limit the specificity of CA 19-9. Also, high levels of serum CA 19-9 are reported in idiopathic interstitial pneumonia [3] and in Mirizzi's syndrome [4]. Takayama et al. [5] speculated that examination of the serum CA 19-9 level helped in diagnosis of the cystic lesion. Conversely, Matsuoka et al. suggested that CA 19-9, CA 125 and CEA were not specific indicators of abnormal cellular activity, and they were synthesised and secreted by normal epithelial cells of the central airways and/or respiratory glands. In this case, the CA 19-9 level in cystic fluid was extremely high (>50,000 U/l) compared with CA 125 and CEA levels. Therefore, we think that a high CA 19-9 level may support the diagnosis of mature cystic teratoma.

In conclusion, we have presented a case of spontaneous rupture of a mediastinal cystic teratoma into the pleural space. The patient had high levels of amylase and lipase in the cystic fluid. This finding supports the hypothesis of autolysis causing rupture. However, we suggest that a high CA 19-9 level may also help with the diagnosis of cystic teratoma. Rapid diagnosis of this extremely rare complication is important because it may progress to a life-threatening condition. CT and MRI play a significant role in showing the tumour location and tumour tissues, and provide pertinent preoperative information. 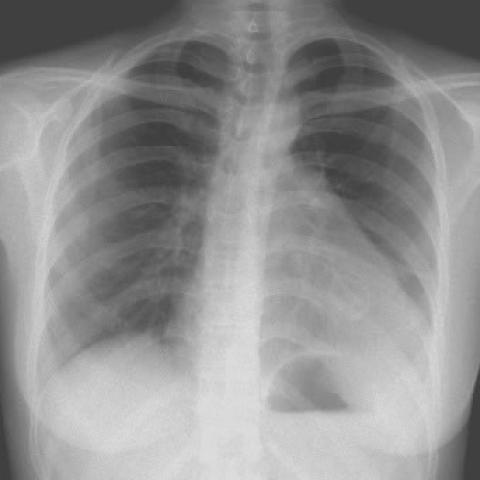 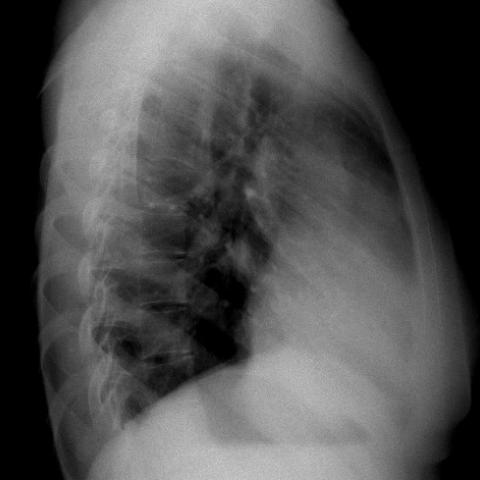 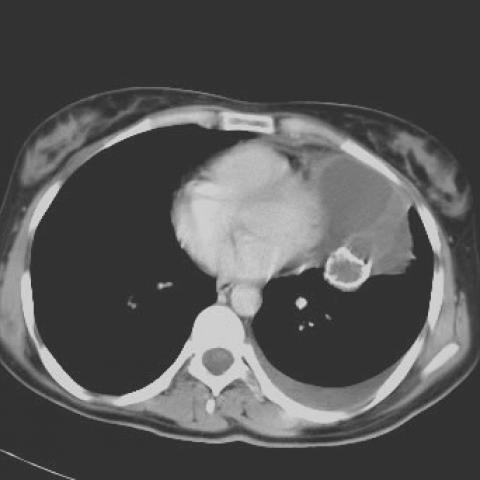 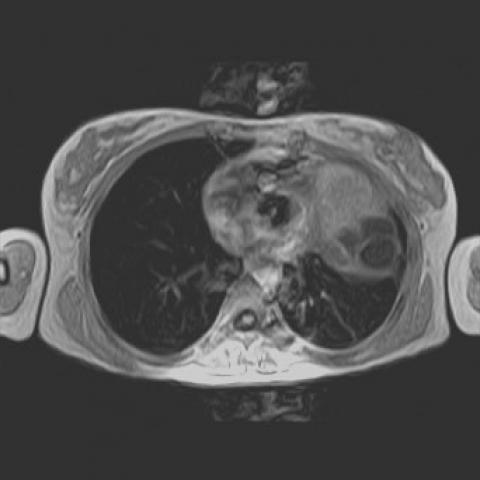 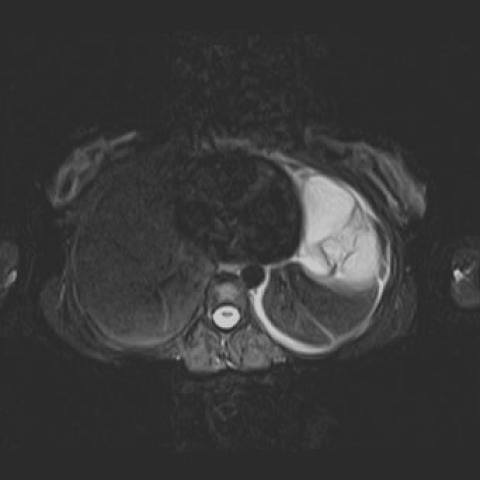 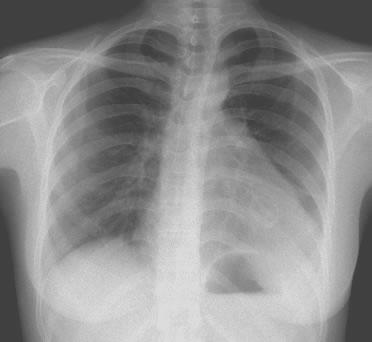 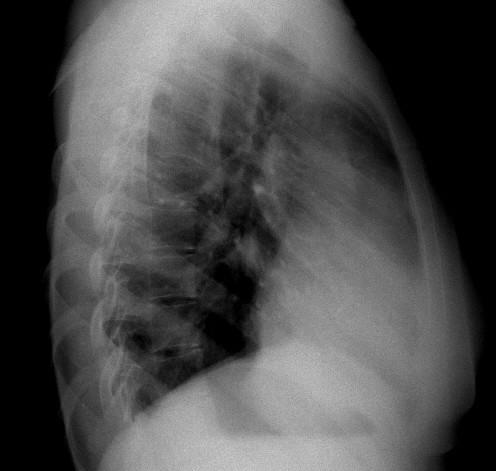 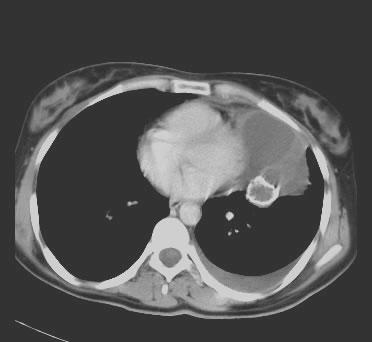 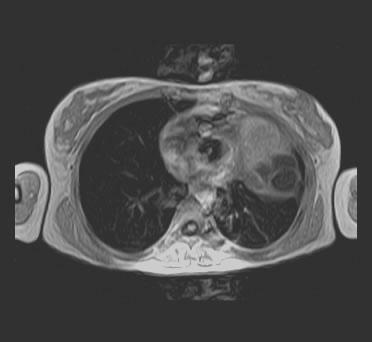 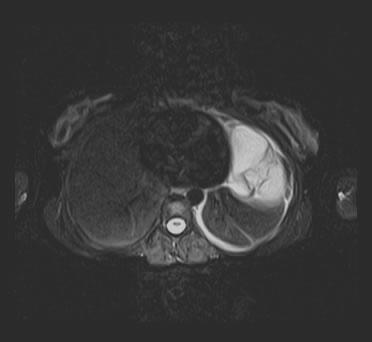