A CT scan showed marked hyperostic changes in the greater wing of the right sphenoid bone (Fig. 1). MRI revealed a thin rim of contrast enhancement closely following the contour of the adjacent sphenoid wing. Abnormal enhancement along the lateral wall of the right orbit was seen too (Fig. 2).

The findings were presumed to represent an en-plaque meningioma.

Discussion
Meningiomas en plaque are rare tumors characterized by their clinical and biological behavior than their histological appearance. This term was given by Cushing to differentiate them from the commonest form, also called meningioma en masse.

Meningioma en plaque is most commonly seen in the sphenoid wing, although they have been described in a number of locations. The tumour is typically slow growing, of limited thickness and has a flat or slightly nodular shape. It tends to form a thin layer, which closely follows the contours of the inner table of the skull and may occupy a considerable area. These tumours are more likely to provoke adjacent bony hyperostosis than are larger globular tumours and the amount of hyperostosis is often disproportionate to the relatively small tumour. It is the bony changes that produce the clinical symptoms and signs.

Histological features in the majority of cases are those of "classic" meningioma exhibiting varying degrees of invasion into the surrounding bone and soft tissues. The basis of this invasive behaviour is not clearly understood. Common reported symptoms include exophthalmos (83%); decreased visual acuity (38%); headache (36%); and diplopia (21%).

En-plaque tumour growth of meningiomas can be difficult to detect by radiological evaluation. Plain radiographs may demonstrate hyperostosis, which may be present in up to 44% of patients.

En-plaque meningiomas are well seen on CT scans and appear as a very prominent area of hyperostosis that often demonstrates no discernible soft component. The absence of a significant intracranial soft tissue component may cause some difficulty in diagnosis. Primary calvarial abnormalities such as fibrous dysplasia, osteoma, or even Paget's disease may also present with somewhat similar CT appearances.

The inward bowing of the hyperostotic bone and the lamellar periosteal pattern of hyperostosis favours the diagnosis of en-plaque meningioma. Fibrous dysplasia on the other hand, typically produces a smooth texture of the inner table of the skull that is rarely convex towards the intracranial compartment. The feature specific to meningiomas that may be seen with CT is a thin subdural layer of ossification separated from the hyperostotic bone by a thin linear lucency in a plane perpendicular to the axis of the lesion. This finding will not be present in primary lesions of the calvarium.

Although CT is in general superior to MRI for the evaluation of osseous structures, the hyperostosis that is often caused by meningiomas may also be appreciated on MRI examinations, the hyperostotic bone producing an increased width of the signal void caused by the inner table of the skull. The thin rim of meningioma is usually isointense to normal grey matter on T1-weighted images and has relatively low signal intensity on T2-weighted images. Strong enhancement of a dural lesion after the administration of paramagnetic agent adds specificity to the diagnosis of meningioma in these cases. The multiplanar capability of MRI is extremely useful in depicting the thin layer of the neoplasm.

Meningioma en plaque can only be defined by the disproportionate degree of dural involvement and it is this feature that determines the diagnosis. In certain cases where the degree of dural involvement is minimal, distinction between primary intraosseous meningioma may be difficult. Several authors emphasise the difficulties in differentiating these entities. The two types of meningioma have the same treatment, consisting of total resection of the tumour and biopsy or excision of the underlying dura. However the term meningioma en plaque is merely descriptive and the entities share a larger number of similarities than differences.

Operative management includes microsurgical and craniofacial techniques. The transzygomatic approach enables the surgeon to safely resect hypererostotic bone and provides excellent access for orbital decompression. The role of radiotherapy in these cases has not yet been established. 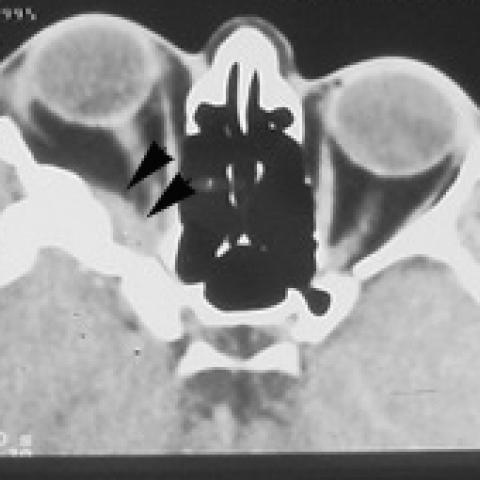 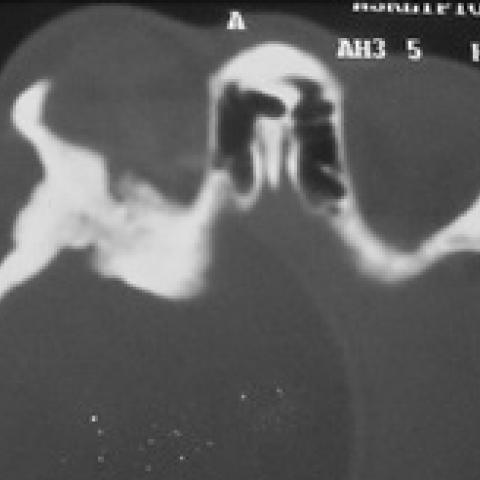 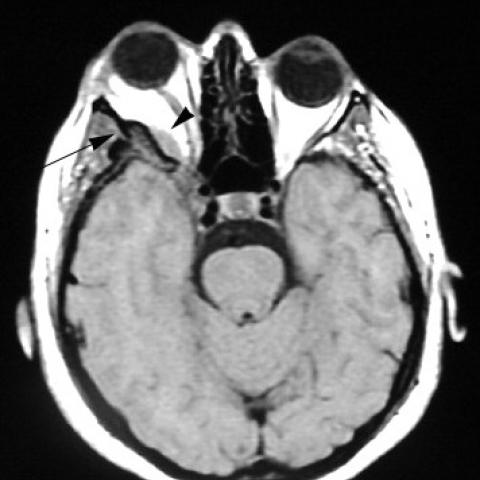 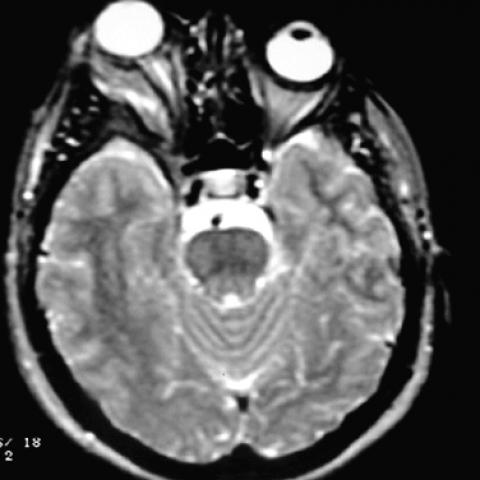 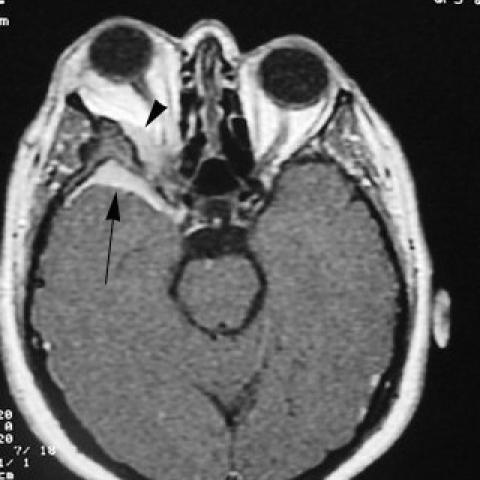 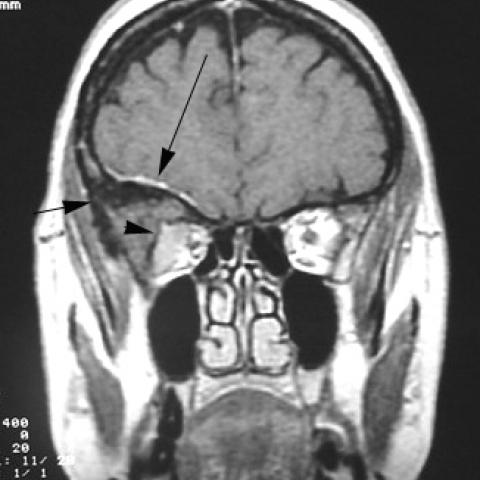 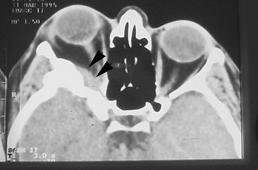 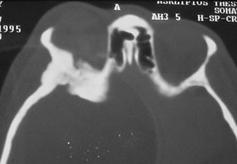 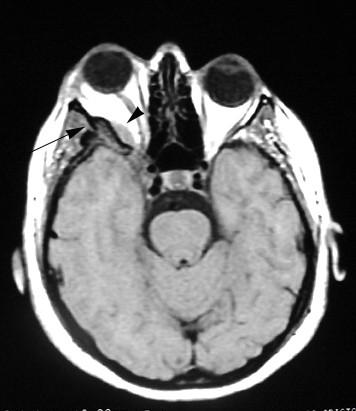 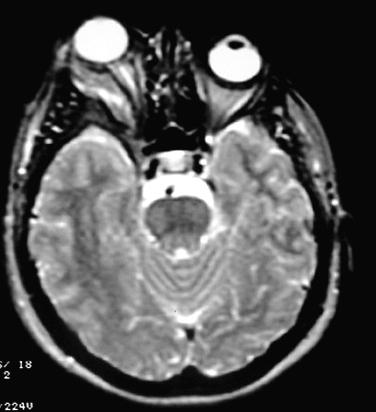 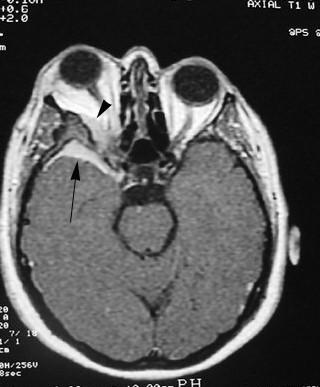 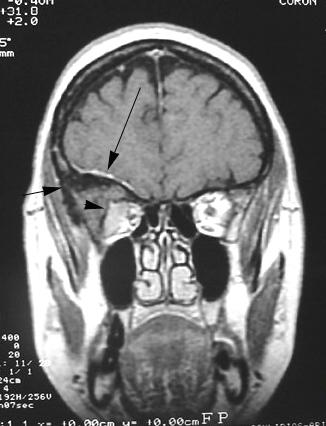