Categories
No Area of Interest ; Imaging Technique Digital radiography
No Procedure ; No Special Focus ;
Show more Show less
Download as PDF Print Show related cases Notify admin
Clinical History
Pain in the right hip extending to the knee.
Imaging Findings
The patient complained of pain in the right hip extending to the knee joint over the past few days. An AP view of the pelvis and frog lateral views were obtained. On the AP view there was a subtle blurring of the epiphysis on the right side, which appeared smaller than on the left. The line through the superior part of the right femoral neck did not cross the portion of the epiphysis. The diagnosis was of slipped femoral capital epiphysis, which was confirmed on the frog lateral view.
Discussion
Slipped capital femoral epiphysis occurs when there is displacement of the epiphysis over the femoral neck. It arises from various mechanical and constitutional factors. It is variously associated with growth spurt, renal osteodystrophy, rickets/malnutrition (commonly in young children and neonates), trauma, overweight, and endocrine factors (hypothyroidism). Patients usually present with hip pain (50%) or knee pain (25%) of 2-3 weeks' duration. It occurs most often in boys between the ages of 10 and 17 years; in females the average age is 12. It tends to be bilateral in 20-35% of cases. It tends to affect the black population more than whites and is more common in the left hip than the right. In girls it tends to occur at the same frequency (9-18% as an initial presentation) and the other side is affected within 6 months of the initial presentation.

Radiologically, on the AP view there is widening of the epiphyseal line, and the epiphysis appears smaller with blurring of the physeal line. A line drawn along the superior border of the femoral neck (Klein's line) should cross at least a portion of the femoral epiphysis; slippage should be suspected if the line does not touch the epiphysis. An AP view may not be sufficient to reveal the slippage; a frog lateral view is often necessary to show the slippage better. Slippage can be graded depending on the severity: Grade I, when the displacement of the epiphysis is less than 30% of the width of the femoral neck; Grade II when slippage is between 30% and 60%; and Grade III when the slippage is greater than 60% of the width of neck.

Sonography is sensitive in assessment of stability and remodelling.Sonography can miss minimal slips but pronounced and mild slips are reliable demonstrated.It is also important in the detection of effusion at the hip joint and aspiration to prevent vascular impairment.Pre treatment bone scan is a sensitive predictor for development of avascular necrosis in unstable SCFE's and may provide a method for evaluating orthopaedic treatment.MR imaging demonstrates the features of slip and physeal changes.MR of the affected hips show widening of the physis.Sequential MR may be performed for the assessment of preslip in the contralateral hip.Physeal widening is apparent on T1-weighted MRI.T2-weighted images show synovitis and marrow edema but can miss physeal abnormalities.MR will changes even when radiographs are normal. Early diagnosis and treatment is paramount to prevent complications. Treatment is usually insertion of a screw or screws, depending on the surgeon's preference, through the anterior aspect of the greater trochanter to prevent further slipping. The pin enters the centre of the epiphysis and care should be taken to avoid penetration into the hip joint, which can lead to osteonecrosis of the femoral epiphysis. There are controversies regarding the treatment and also regarding the prophylactic pinning of the contralateral hip.

Complications of slippage include avascular necrosis (in 15% of cases, depending on the severity of the slippage and location of the pins). Chondrolysis occurs in 40% of patients and occurs more commonly in females and in black patients. It tends to occur within a year of slippage. Remodelling deformities including coxa deformity. Degenerative osteoarthritis can occur in up to 90% of patients.

AP view of the pelvis 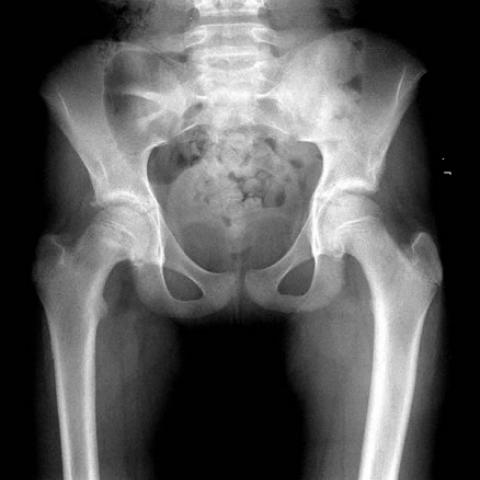 AP view of the pelvis showing subtle blurring of the right epiphysis, which appears smaller than the left. 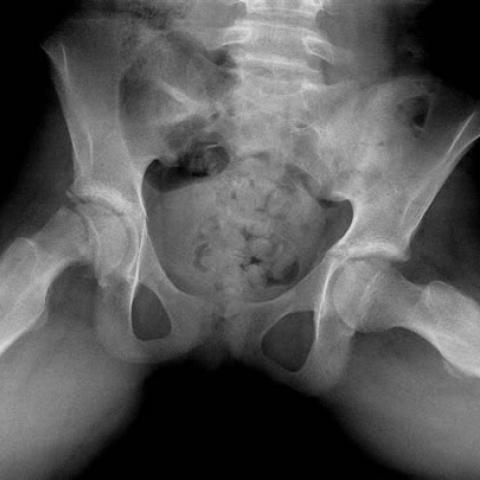 Frog lateral view of the pelvis showing the slippage of the femoral epiphysis on the right side.

AP view of the pelvis 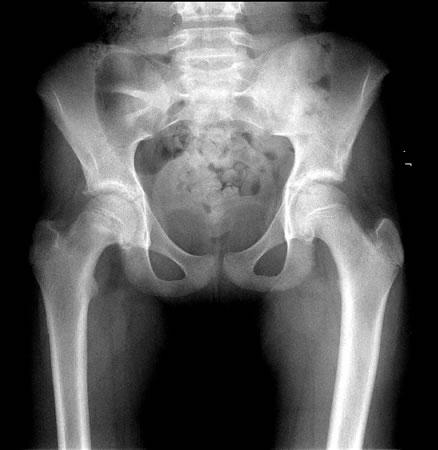 AP view of the pelvis showing subtle blurring of the right epiphysis, which appears smaller than the left.

Frog lateral view of the pelvis showing the slippage of the femoral epiphysis on the right side.