Rare case of large Omental cyst in an infant

A 3-months-old female presented with abdominal distension and a palpable lump on left side of abdomen. There were no other complaints of fever, vomiting, diarrhoea or constipation. Previous clinical history and laboratory investigations were unremarkable. Abdominal Ultrasound and Contrast-enhanced Computed Tomography (CECT) were performed. (MRI abdomen was not performed as patient could not afford the cost of the investigation).

Abdominal ultrasound revealed a relatively well-circumscribed thin-walled cystic lesion in mid abdomen displacing the bowel loops on the sides. There was no septation/ solid component within the cyst. CECT of abdomen revealed a large, well-defined, thin walled, unilocular, non-enhancing cystic lesion measuring 9.2 cm (AP) X 9.6 cm (TRV) X 11.5 cm (CC) approx in the left side of abdomen extending from the level of D9 vertebra upto S1 vertebral level [Figure 1,2]. No septations/ calcification/fat/soft tissue component was seen within the lesion. The lesion displaced the bowel loops and pancreas to the right and inferiorly (Figure 3). The lesion displaced the left kidney posteriorly and compressed left upper ureter with mild prominence of left pelvicalyceal system (Figure 4). Intraoperatively a cyst was seen in the lesser sac (Figure 5) with pancreatic body and tail splaying over the cyst (Figure 6). The cyst was separated and dissected from the tail of the pancreas and the adjacent structures (Figure 7,8).

Cystic abdominal masses are infrequent in infants. They can either arise from solid organs (liver, kidney, pancreas, spleen, and adrenal gland), peritoneum (mesentery or omentum) or bowel. In our patient, the cystic lesion was peritoneal in origin.

Histologically the omental and mesenteric cysts can be lymphangioma, enteric duplication cyst, enteric cyst, the mesothelial cyst, and the nonpancreatic pseudocyst; most common being lymphangioma [2].

Lymphangioma is a benign congenital malformation of the lymphatic system. They are thin-walled, multilocular cystic masses with chylous/serous contents. They are more commonly seen in the mesentry than the omentum. They may get complicated due to hemorrhage or infection and may cause intestinal obstruction or volvulus [3].

Enteric duplication cysts are congenital malformations formed during the embryonic development of the digestive tract. They can be cystic (80%) or tubular (20%). The spherical cysts usually donot communicate with the gastrointestinal tract (GIT) lumen whereas tubular cysts communicate with the adjacent GIT lumen. They are usually thick walled with double-wall formed by inner hyperechoic mucosa and outer hypoechoic smooth muscle layer (muscularis propia) called as muscular rim sign (gut signature sign) [4].

Enteric cysts are thin-walled, unilocular cysts with serous contents. They dont have reduplication of the bowel wall as seen in enteric duplication cysts.

Mesothelial cysts are thin walled, unilocular cysts resulting from incomplete fusion of mesothelial-lined peritoneal surfaces. Histologically they have mesothelial cells lining the inner surface of the cyst distinguishing them from other types of mesenteric and omental cysts.

Large ovarian cysts can present as cystic lesion in abdomen mimicking omental cysts and should always be considered a differential in female infants.

Sometimes ascites may mimic large omental/mesenteric cyst but it usually doesn’t cause mass effect on bowel or other adjacent structures.

Imaging helps in establishing the location, size and extent, mass effect on adjacent structures and/or any complications in omental/mesenteric cysts. Preoperative differentiation between omental and mesenteric cysts helps paediatric surgeon in pre-operative planning. 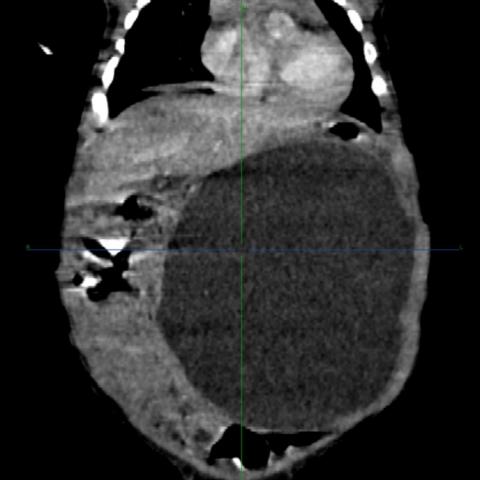 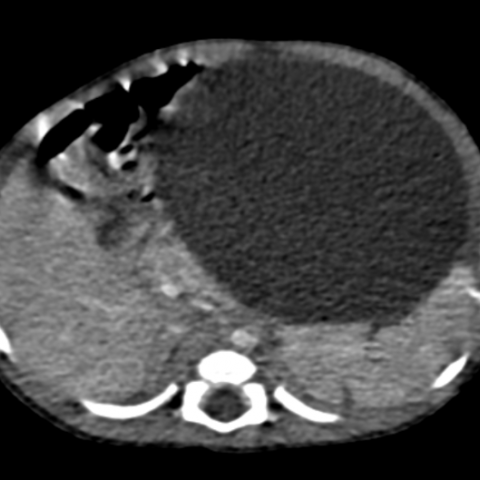 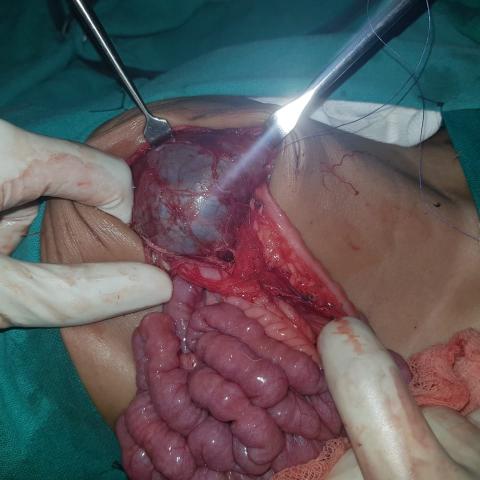 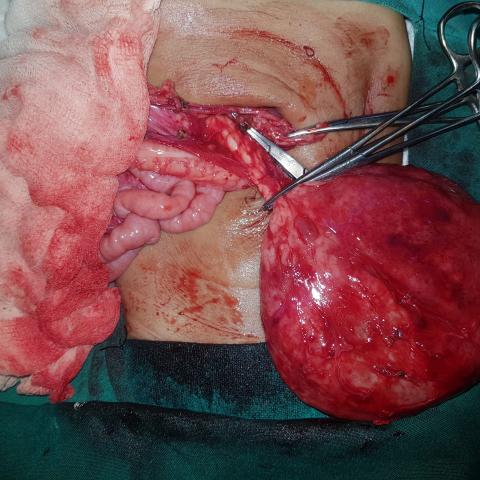 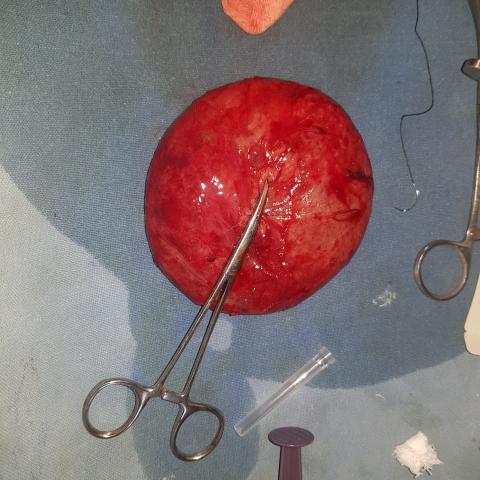 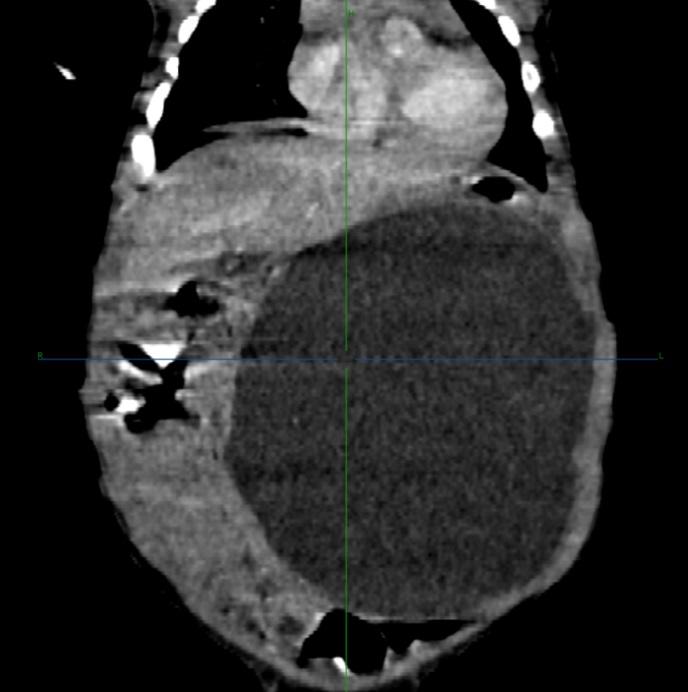 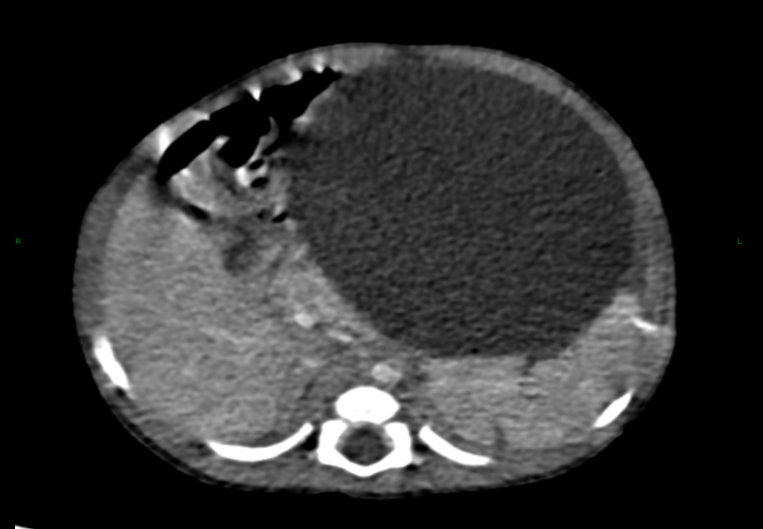 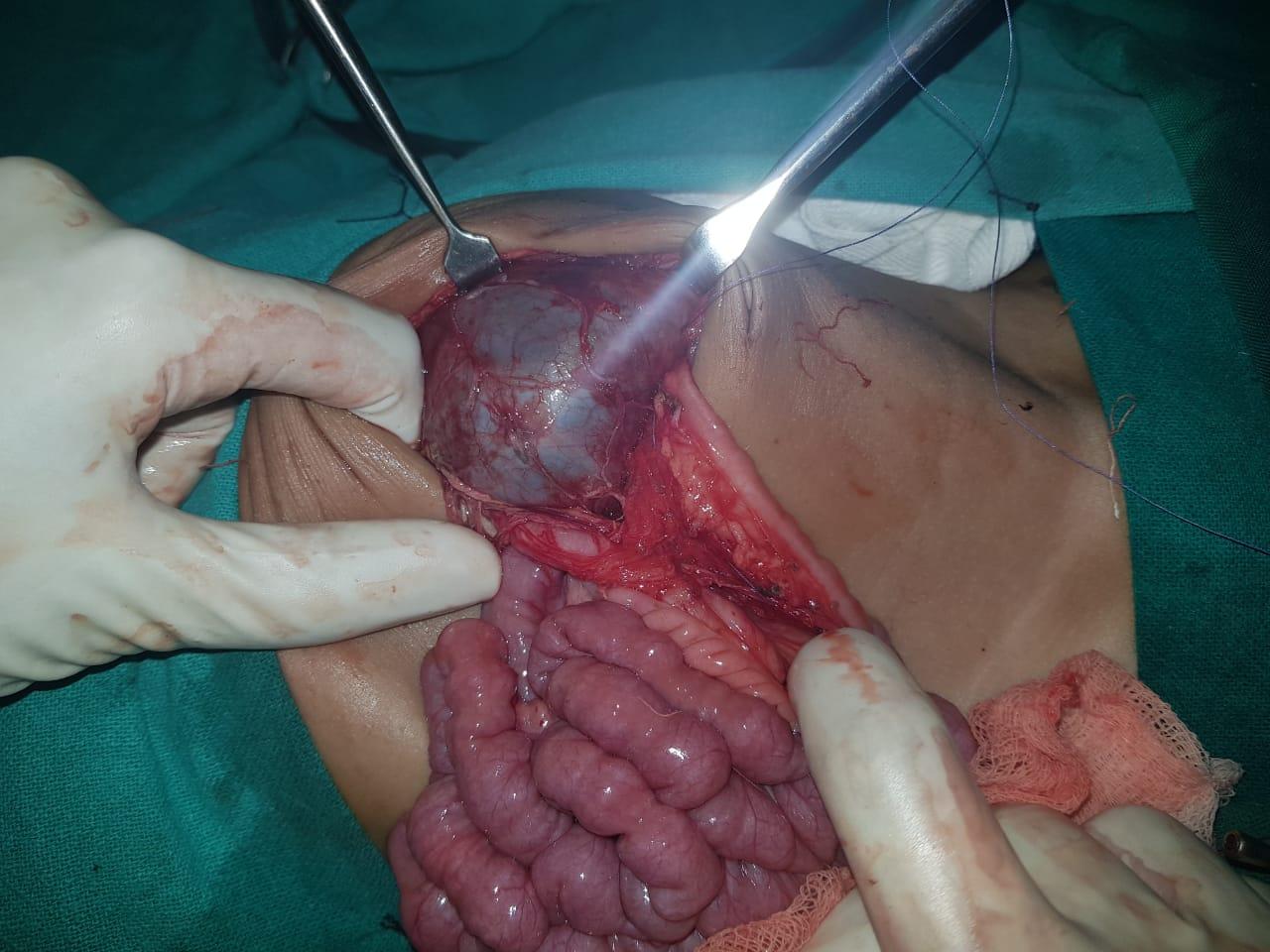 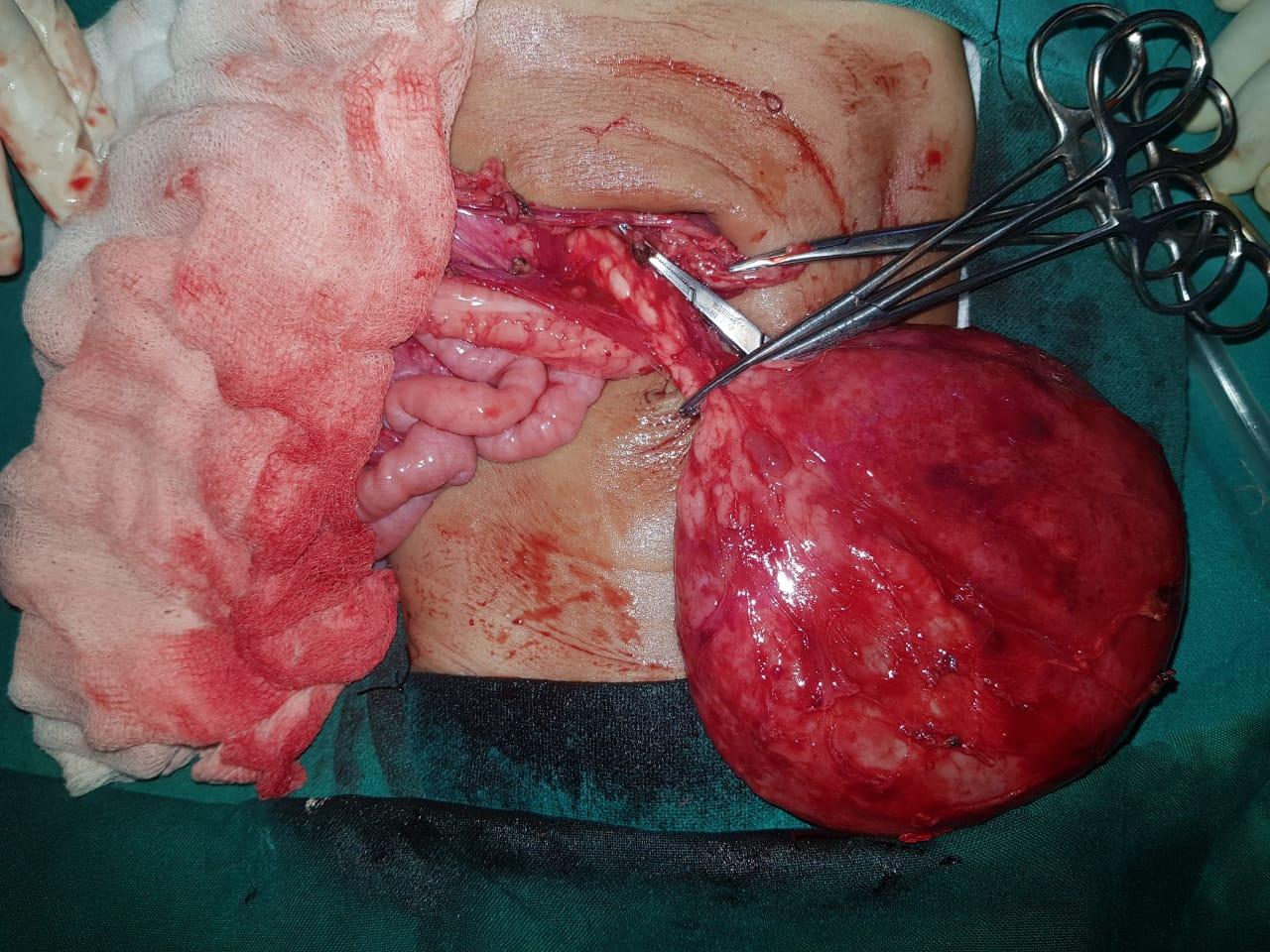 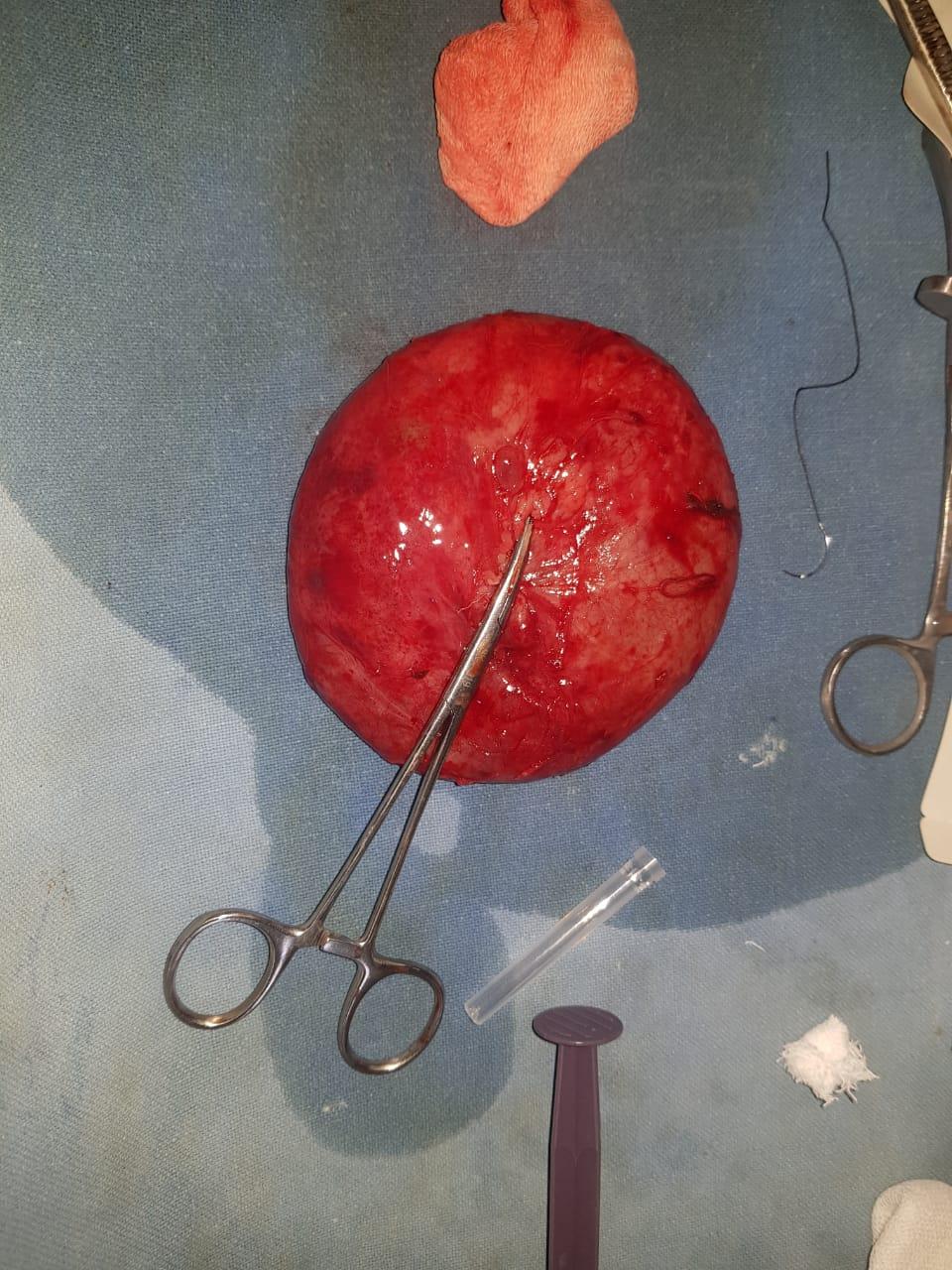