A 27-year-old male presented with uncontrolled fever, abdominal pain, dizziness and breathlessness. On physical examination severe pallor, tachypnea and tachycardia were noted and the blood pressure was 90/60, severe tenderness was noted in all the quadrants of abdomen, ascites and hepatosplenomegaly were present. Subsequent laboratory investigations revealed Seropositivity for Non -Structural Protein 1 antigen (NS 1), haemoglobin was 5.1 mg/dl, and low platelet count (30,000 per mm3). Other systemic examinations and laboratory investigations were not contributory.

CT on pre-contrast (Figure 1), arterial (Figure 2) and venous (Figure 3)  demonstrated an enlarged spleen with multiple hypodense non-enhancing areas predominantly in the upper pole and peri splenic hematoma. Mesentery was diffusely misty (Figure 4), and free fluid was noted in the pelvis (Figure 5) and along the mesenteric sleeves of bowel. Bilateral mild pleural effusion was also noted (Figure 6).

In this case, laboratory investigations revealed seropositivity for NS 1 antigen. Other symptoms of the patient were also consistent with dengue hypovolemic shock. Since CT were suggestive of splenic rupture, the patient underwent splenectomy after which the patient's clinical status became stable. Dengue fever [DF] is caused by all four serotypes of dengue virus and is commonly carried by the vector Aedes aegypti. The shifting pattern of immunity and infection is the reason behind complications among the adult population [1] The exact pathogenesis of complicated dengue fever is unknown, but the increased vascular permeability, abnormal homeostasis, increased capillary fragility, thrombocytopenia, impaired platelet function, and disseminated intravascular coagulopathy all have been implicated as the causative mechanisms. Spontaneous splenic rupture is rare, but life-threatening complication [2]. The diagnosis of spontaneous splenic rupture should be suspected in young patients with acute atraumatic abdominal pain and hemoperitoneum with a recent history of infection. Non-traumatic splenic rupture can be pathological or spontaneous. Spontaneous splenic rupture is caused by lymphoproliferative diseases, connective tissue disorders, solid neoplasm, aneurysm, pancreatitis and various other infective disorders [3]. DF is one of the rare causes of spontaneous splenic rupture and hemoperitoneum. The spleen is frequently congested in case of DHF, and sub-capsular hematomas are found in 18% of necropsy cases [1].

The pathogenesis behind this complication is probably because of the congestion of spleen and thrombocytopenia or both [1]. Warning signs of this complication include vomiting or increasing abdominal pain with disproportionate ascites [4]. Sentinel clot signs may be seen on CT if associated with a subtle haemorrhage restricted to the site of injury. Depending on the haematocrit of the patient, extravascular blood measures 35 to 60 Hounsfield Units (HU) and becomes even denser (60-80 HU) from clotting within a few hours. CT reliably allows detecting hemoperitoneum and ongoing bleeding. Non-contained active haemorrhage appears as serpiginous or jet-like extravasation of injected contrast medium, which follows the attenuation of blood vessels in all acquisition phases and generally progresses from the arterial to the venous phase.

Splenectomy is the treatment of choice for spontaneous splenic rupture with hemoperitoneum [1]. 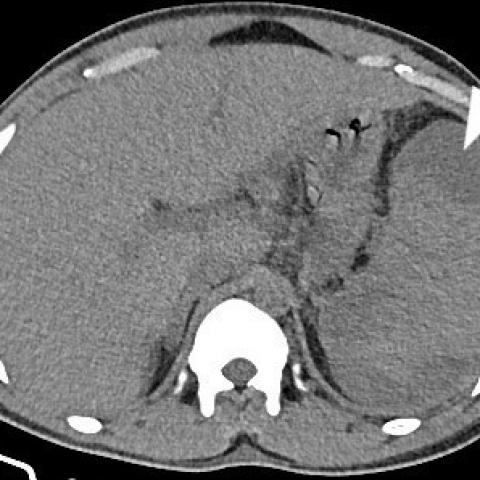 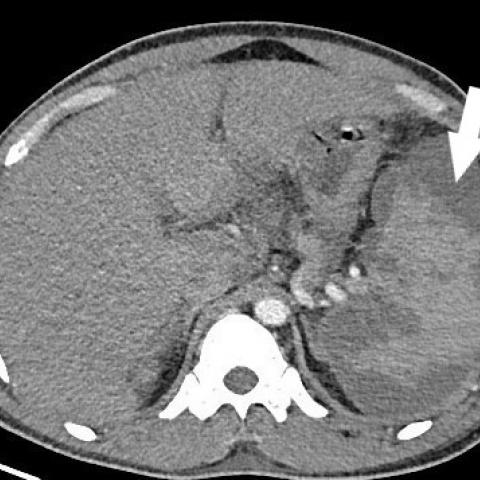 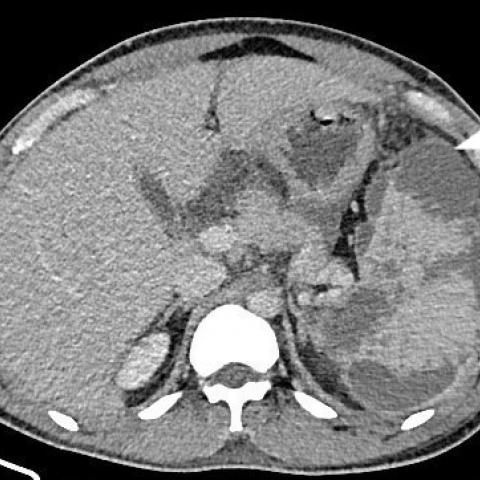 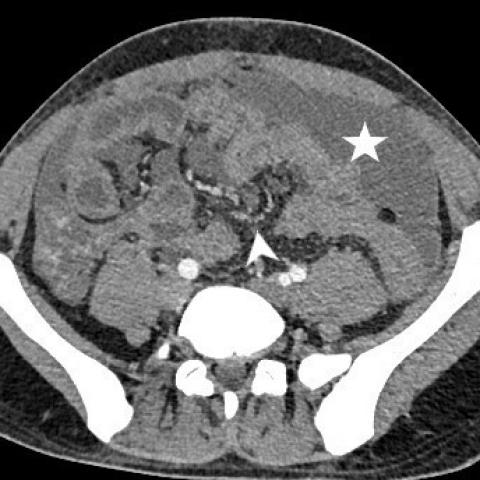 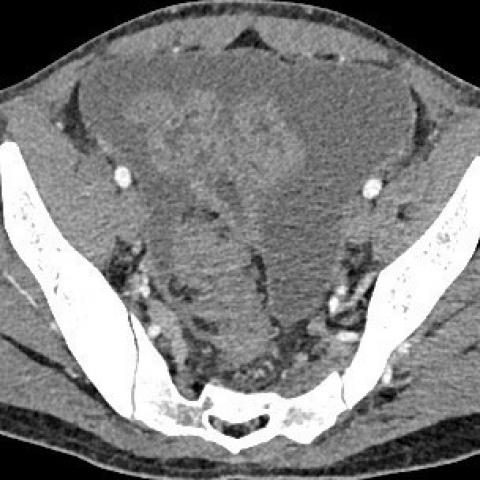 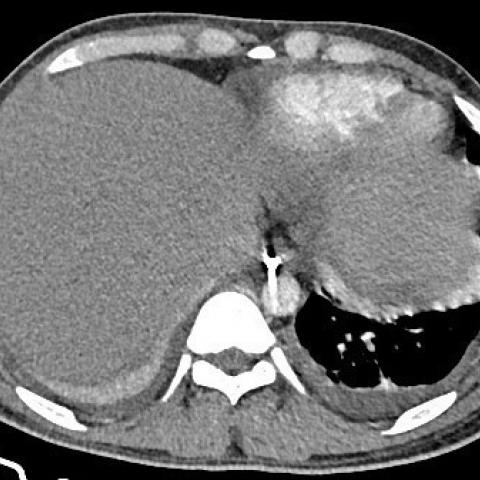 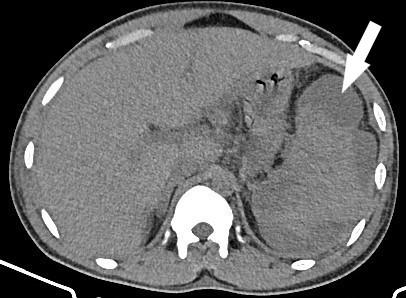 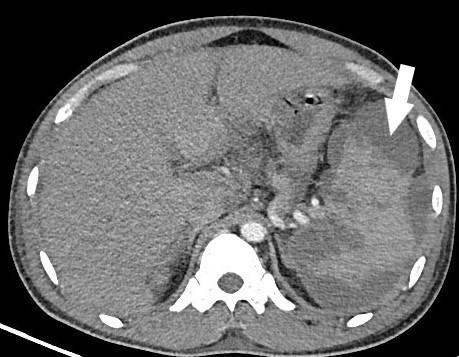 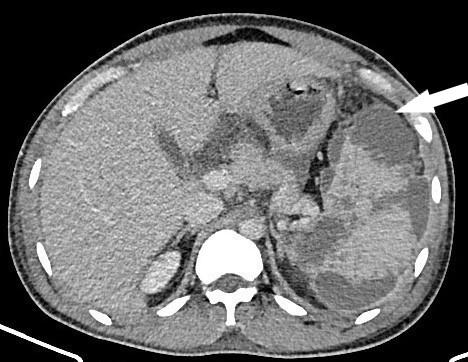 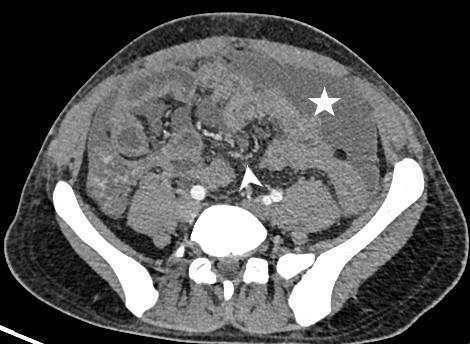 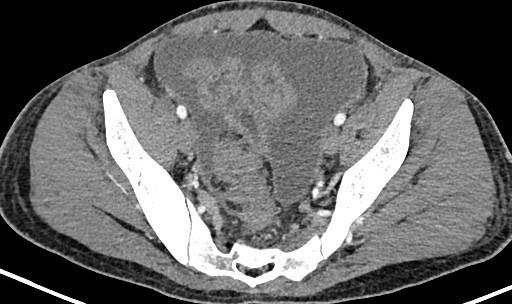 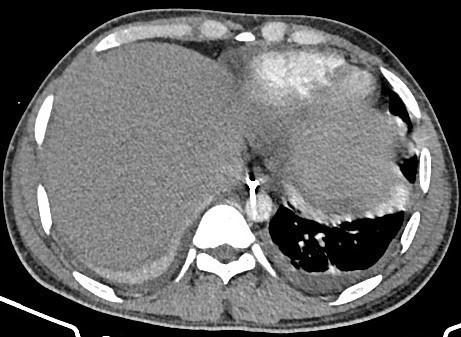