A young adult female patient with well-controlled partial seizures and mild dysmorphic features presents with slowly progressive bilateral upper limb pyramidal, cerebellar signs and ataxic spastic parapesis.   Her sibling has a more severe phenotype whereas neither parent is affected. She has been treated supportively with environmental and home adaptations.

Neuroimaging performed over the years reveals progressive bilateral white matter signal changes suggestive of a leukoencephalopathy (Figure 1). There are extensive areas of hypointensity on both the T1 and T2 images involving both basal ganglia and thalami, dentate nuclei and the central pons as well as the juxtacortical posterior right frontal lobe. These areas demonstrate susceptibility artefact on the SWI in keeping with dystrophic calcification. In addition to the above findings, there are also cystic lesions in the white matter of both cerebral hemispheres with mural calcification. On the post-contrast T1 images, these cysts demonstrate heterogeneous peripheral rim enhancement indicating disruption of the blood-brain barrier (Figure 2).

Labrune syndrome is a constellation of leukoencephalopathy, cerebral calcifications and cysts, which was first described by Labrune in 1996 [1–3]. This is a rare pathology, which affects adult and paediatric patients with a preponderance for females [4,5]. Clinically, patients present with recurrent seizures, progressive cognitive decline, motor weakness, as well as cerebellar signs [1–3].  In a proportion of the patients, the condition arises due to a mutation in the gene SNORD118 located on chromosome 17p13.1 [5]. This gene encodes a U8 snoRNA protein, which plays an important role in protein synthesis by binding and facilitating pre-rRNA folding. In itself, this process appears to be crucial for normal cerebral vascular physiology [5].

The hallmark of this pathology is a diffuse microangiopathy with associated angiomatous proliferation of blood vessels [5]. This disorganised proliferation of the microvasculature results in fibrin thrombi and microbleeds and eventually, degenerative changes ensue with resulting hyaline deposition, formation of Rosenthal fibres and perivascular foci of calcifications [5].

There is good clinical-radiological correlation, therefore awareness of this condition can help reach early diagnosis, allowing the use of novel treatments which may help slow down the disease progression [2].

The typical neuroradiological findings in Labrune syndrome (LCC) include parenchymal calcifications, which are commonly located in the basal ganglia, but may also occur in the subcortical and periventricular white matter [5]. Calcification has also less commonly been observed in the dentate nuclei, in the cerebellum and brainstem. The parenchymal calcifications are best appreciated on CT or susceptibility weighted images/T2* (Figures 3 and 4). Cysts are another key feature, seen predominantly in supratentorial locations with an asymmetric distribution, but may also occur in infratentorial structures [3,5]. The cysts are easily recognised in any of the standard sequences demonstrating central T2 hyperintensity with corresponding T1 hypointensity. The leukoencephalopathy aspect of the condition is well demonstrated on T2 and FLAIR images, as increased T2 signal intensity in affected periventricular and deep white matter with sparing of the corpus callosum [5]. These white matter changes occur as a result of repeated ischaemic events secondary to small vessel microangiopathy [5]. Interestingly, there may be areas of enhancement post-contrast administration, which likely reflect angiogenesis within areas of leukoencephalopathy [5].

Labrune syndrome shares many of the neuroradiological manifestations in Coats plus syndrome [5]. However, the two can be easily distinguished as Coats plus syndrome is a multisystem microangiopathy, which commonly affects the retina causing additional retinal telangiectasia [1–3,5]. 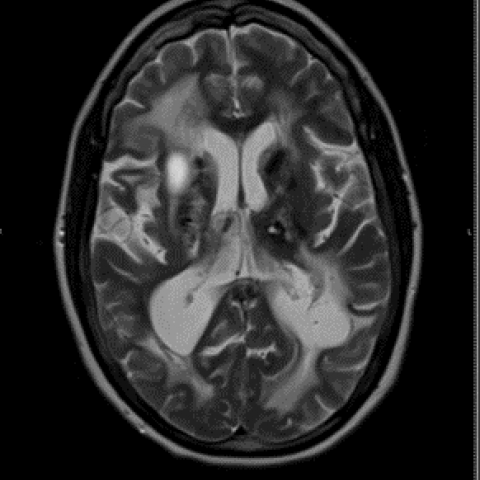 Axial T2 – There are bilateral white matter signal changes consistent with a leukoencephalopathy, bilateral low T1 signal intensities in both basal ganglia which represent focal areas of calcification and a high signal density structure in the right preinsular cortex consistent with a cyst.
Figure 2 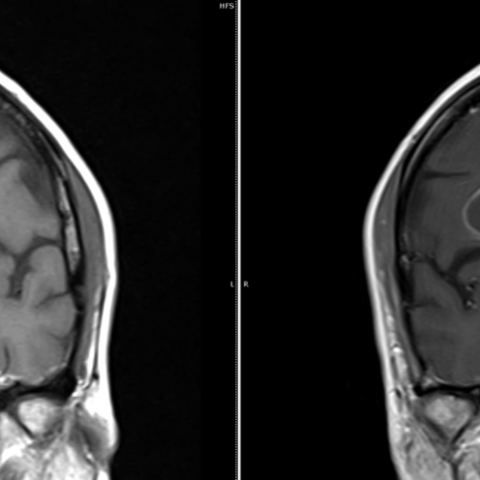 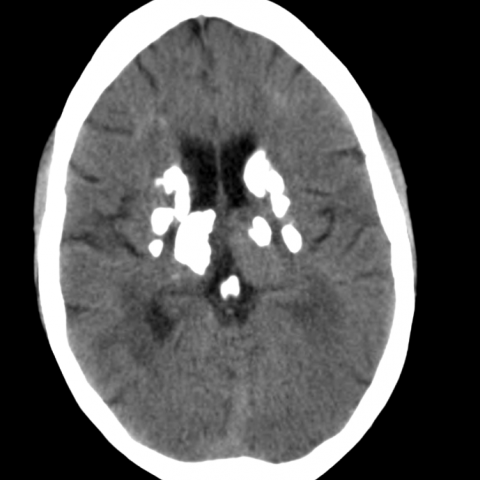 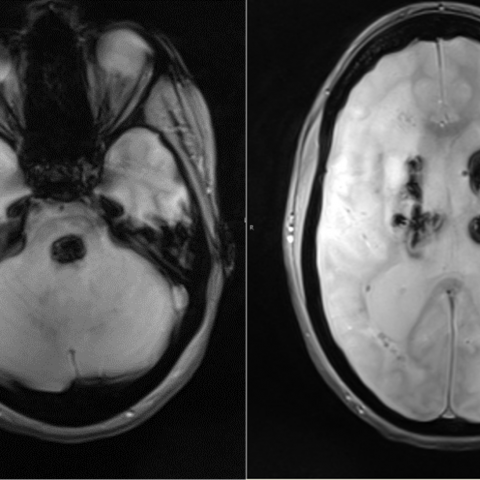 Axial SWI: Hypointense area within the central pons and the basal ganglia bilaterally with blooming arterfact in keeping with calcification. 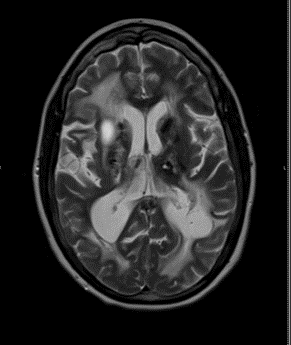 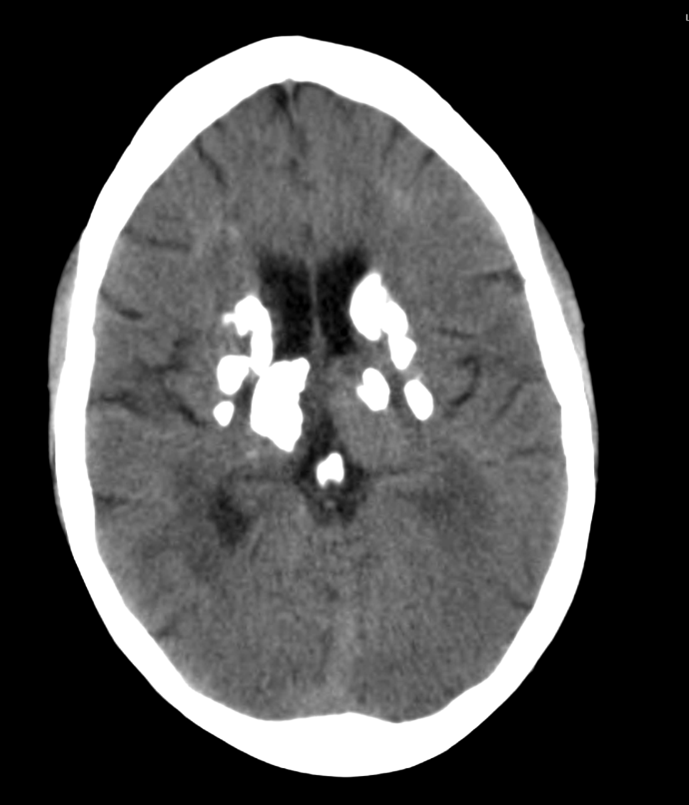 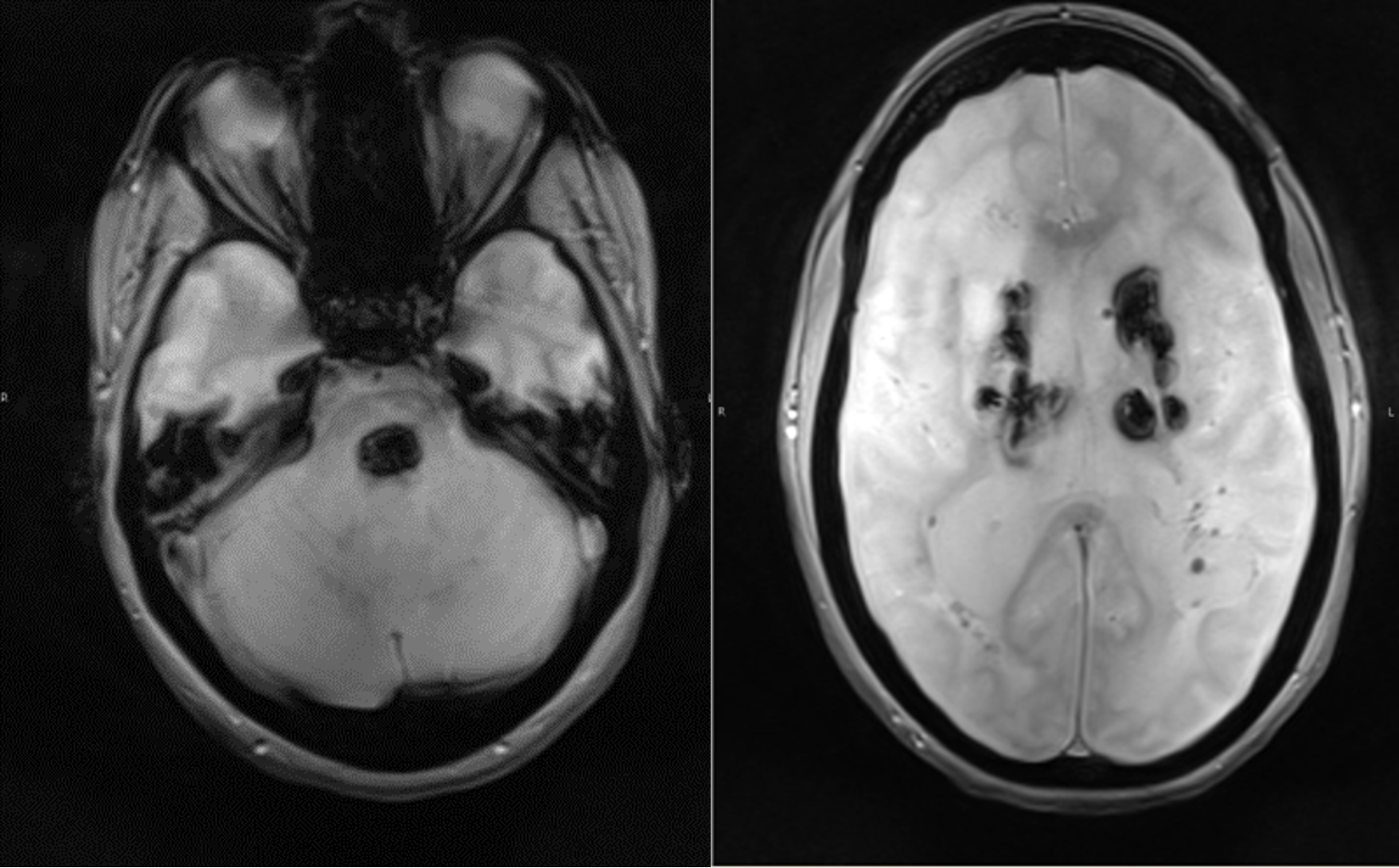