Cerebral Aspergillosis in an immunocompetent patient

A previously healthy 6-year-old girl was taken to the ER after having an isolated convulsive crisis. She was diagnosed with febrile convulsions and a viral infection for which she was prescribed supportive measures. A week later she developed progressive right hemiparesis, for which a non-enhanced CT was performed (figure 1), reporting a right frontal tumour; she was then referred to our institution for further examination. MRI of the brain was performed.

Brain MR Imaging (figure 2) revealed an irregular shaped right frontal lesion with poorly defined edges, surrounding vasogenic oedema, as well as some hemorrhagic areas; mass effect was mild, despite the size of the lesion and extensive vasogenic oedema. In post-gadolinium sequences, there was avid enhancement with an “open ring” pattern. No diffusion restriction was found. Other smaller lesions with similar features were found. There were no signs indicating an infectious process on head and neck imaging. A biopsy was performed showing granulomatous inflammatory process with ectatic blood vessels. The patient was started on steroids and supportive measures.

No improvement was achieved with the established management, so a second MRI was performed (figure 3), showing increase in both number and size of the lesions.

Aspergillus species are fungi commonly found within the environment. Humans are usually infected by inhalation of spores, being the fumigatus sub-species the most prevalent cause in immunocompetent patients, it can cause localized infection of the lungs, sinuses, or other sites. In immunocompromised subjects it can cause life-threatening invasive infections; a very uncommon event in immunocompetent patients.[1] It is believed that CNS Aspergillosis is becoming more frequent due to the increase in prevalence of immunosuppression, as well as improvement of life expectancy of these patients. [2]

When Aspergillus infects the CNS, it usually reaches it via hematogenous spread; however direct inoculation can come from paranasal sinuses or trauma [including surgery]. [3]

Cerebral aspergillosis carries a very poor prognosis, particularly because it’s identification happens usually later in the course of the disease. The reported mortality rate is 88% [4]. Diagnosis [as in this case] may be delayed because symptoms are nonspecific, particularly in immunocompetent patients, where a CNS infection of this kind is rarely suspected[5].

The clinical presentation of cerebral aspergillosis is nonspecific; it can include a change in mental status, behavioral changes, hemiparesis, dysarthria, lethargy, and seizures. Despite the infectious nature of this disease, fever may or may not be present. These signs and symptoms in an immunosuppressed patient grants a neuroradiologic evaluation [6]. Immunocompetent patients can have even less specific signs and symptoms [3]; also, invasive fungal infections not considered as part of the differentials in these patients.

Imaging plays an important role in the approach of these cases, but features found are not always conclusive. Cerebral aspergillosis mainly presents as hemorrhagic infarction [due to Aspergillus invasion of blood vessels] and abscess; however, cerebritis, meningitis and mycotic aneurysms [7]. The most common imaging finding is a lobulated abscess with a thick, enhancing wall (host defense), substantial inflammation involving adjacent structures [paranasal sinuses, dura mater with focal meningitis, osteomyelitis] and extensive parenchymal oedema; more than half of the patients have a corpus callosum lesion [which affected in only a few diseases], a sign that can help narrow the differential diagnosis. DWI/ADC target like lesions are common in the case of an Aspergillus abscess. This can be accounted for central necrosis and an outer hyphal rim with peripheral inflammation. [8]

Cerebral Aspergillosis is a rare, but often fatal complication of invasive Aspergillosis. Unspecific signs and symptoms complicate the approach to these patients, and lack of suspicion can delay diagnosis and treatment. Imaging plays an important role in the diagnosis of the disease; therefore, radiologists should consider it as a differential in both immunocompetent and immunocompromised patients so that appropriate antifungal therapy can be initiated as soon as possible.

Aspergillus cerebritis was determined after CSF examination was performed and PCR was positive for Aspergillus. Antifungal therapy was started, achieving a positive clinical and radiological response. 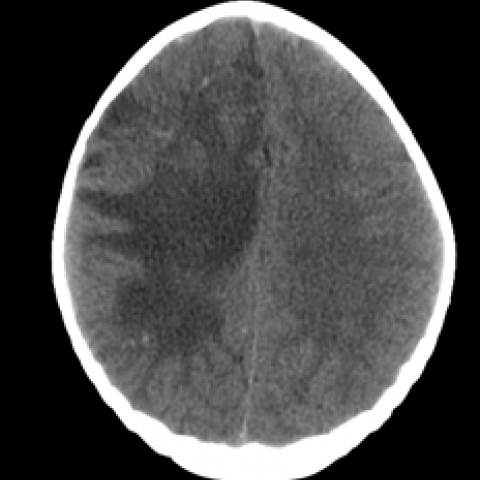 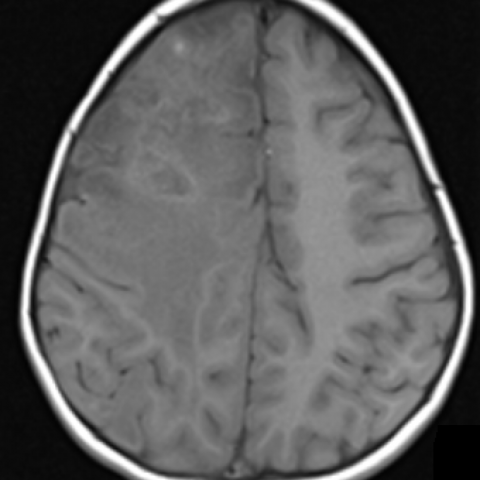 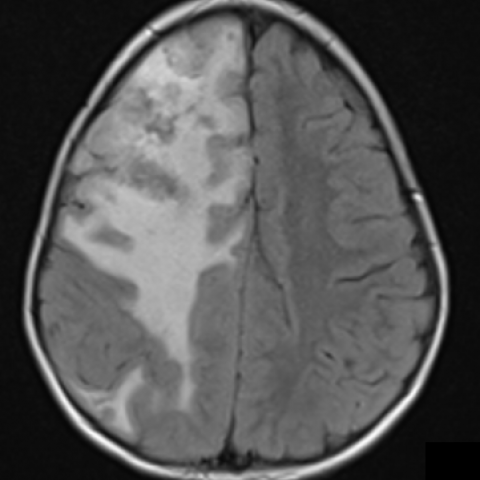 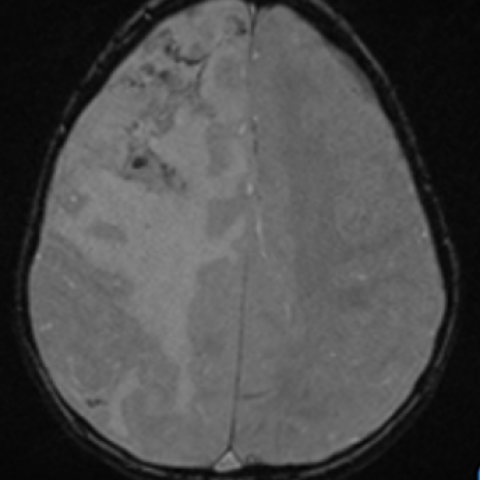 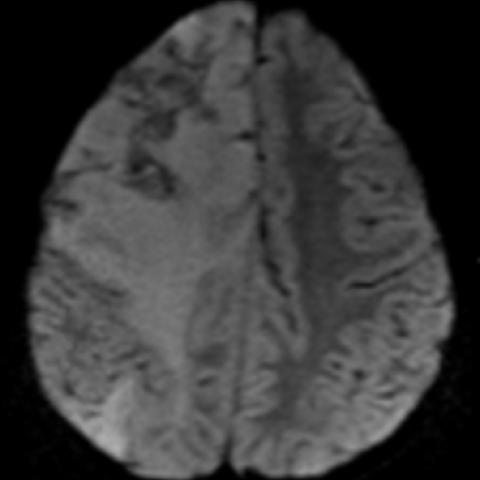 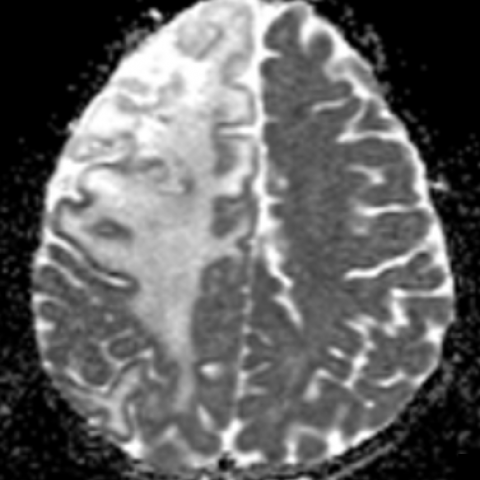 Basal axial ADC map of the brain shows a large hyperintense well defined area compatible with the one present on DWI; confirming T2 shine through without increase in diffusion restriction 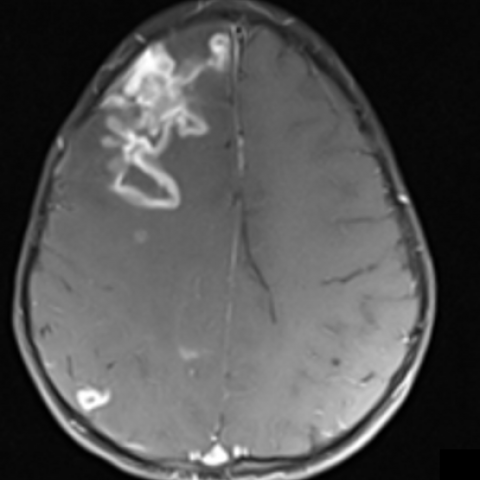 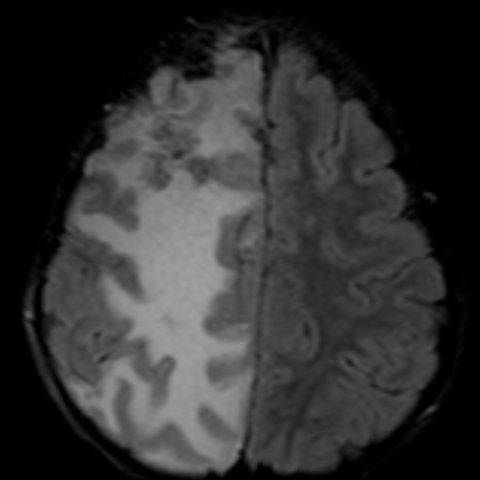 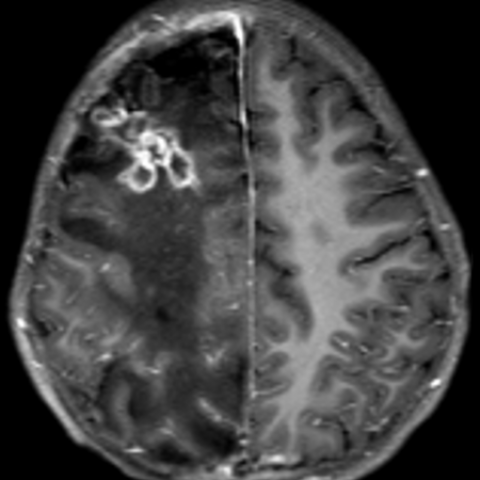 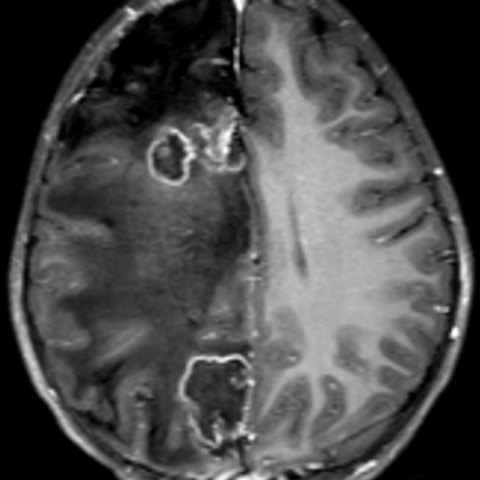 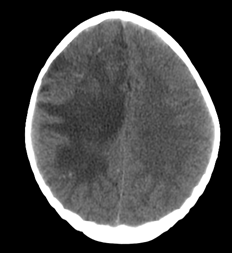 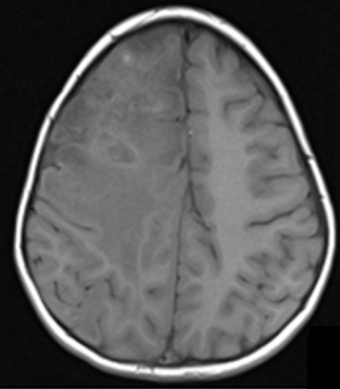 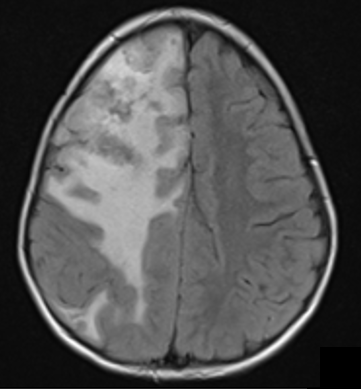 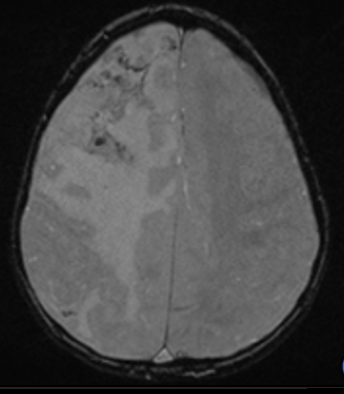 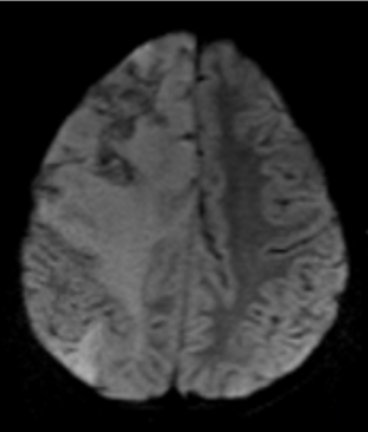 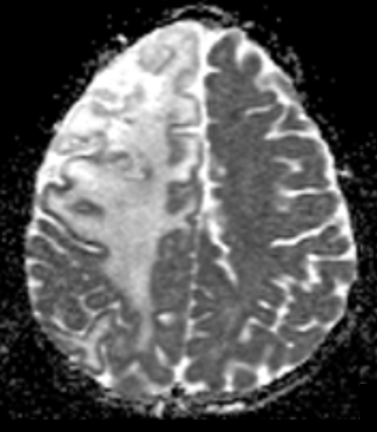 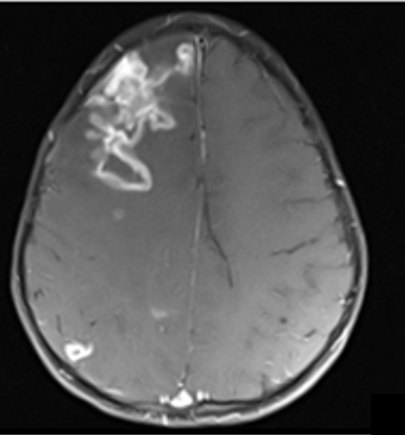 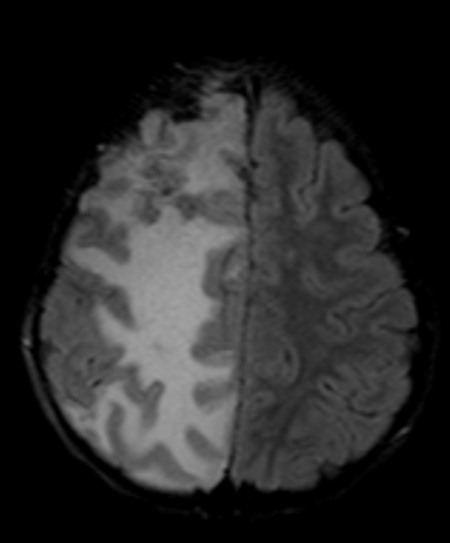 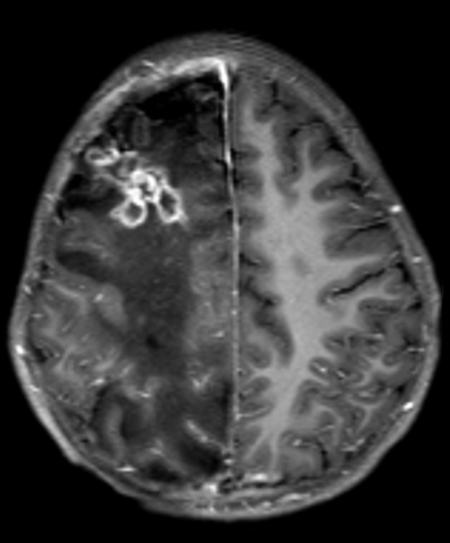 Follow up axial gadolinium-enhanced T1-weighted image of the brain shows surgical changes due to biopsy as well as increase in the size of the satellite lesions
© Department of Radiology, High Specialty Regional Hospital of el Bajio, Mexico, 2019 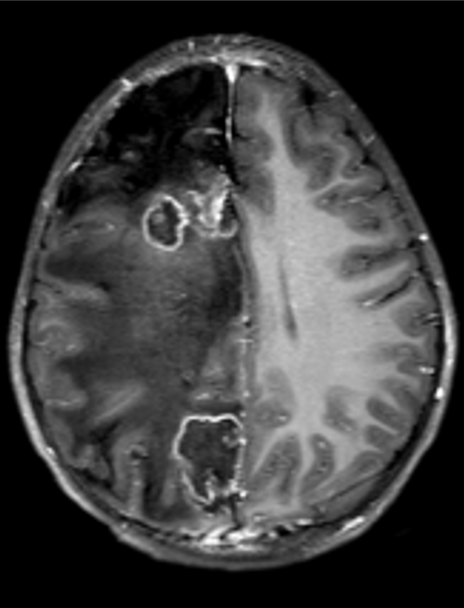