A 78-year-old female was admitted to the emergency department with thoracic pain and discomfort. She had several cardiovascular risk factors, including hypertension, dyslipidaemia, a family history of CAD, and was an active smoker. An electrocardiogram showed lateral T-wave inversion. All cardiac enzymes were slightly elevated.

Considering these findings, an echocardiogram and invasive coronary angiography (ICA) were performed.

Transthoracic echocardiogram demonstrated normal left ventricular function without regional wall motion abnormalities and no significant valvular disease. The patient underwent an ICA, showing a 95% ostial stenosis of the right coronary artery (RCA). In addition to the culprit RCA stenosis, a tight ostial stenosis of the first obtuse marginal branch was observed. An everolimus-eluting stent was deployed at the culprit site in ostial RCA. After the last RCA injection, a retrograde flow was observed in the right coronary sinus of Valsalva (Fig.1).

Given this finding, no attempt was made to stent the other culprit stenosis.

A subsequent computed tomography angiography (CTA) showed an intimal flap in the right sinus of Valsalva (Fig.2a, Fig.2b), with further progression to the ascending aorta (Fig.2c). After the Heart Team discussion based on clinical status, a second CT performed 1 day after coronary intervention showed a mild intimal flap reduction without further advancement of the aortic dissection.

Based on this finding, another PCI was performed to treat the culprit stenosis of the first obtuse marginal branch (Fig.3a) with a TIMI 3 flow obtained at the end of the intervention (Fig.3b). Subsequently, she was discharged home in favourable clinical course.

Sinus coronary dissection is a rare complication during a percutaneous coronary intervention, potentially mortal due to a probable occlusion of the corresponding coronary artery and a possible extension to the ascending aorta [1]. Evidence-based management of sinus coronary dissection remains unclear because of its rarity, and it is mainly determined by hemodynamic stability. This dreadful complication may be caused directly by the catheter tip or indirectly by a jet of contrast material against the coronary artery wall, leading to separation of the media due to hematoma formation. Several risk factors are reported including, female sex, direct trauma, anatomical and technical factors. In particular, RCA is more commonly involved due to its anatomy, with a perpendicular origin from the aortic sinus in comparison with the acute origin of the left main coronary artery [2].

CTA is the widely used non-invasive imaging modality to assess ICA/PCI complications, allowing to evaluate an extension of the dissection flap in the aorta.

In fact, the dissection flap may involve the aorta in variable length. Dunning et al. proposed a 3 class classification for coronary artery dissection with retrograde extension into the aortic root. Class I represent a focal dissection restricted to the ipsilateral sinus of Valsalva. Class 2 was defined as a flap extension into the tubular aorta but < 40 mm, conversely Class 3 with a length > 40 mm [3].

Prompt diagnosis of this entity and proper treatment based on clinical symptoms and aortic involvement is needed to improve the patient outcome. Different treatment has been proposed, such as conservative therapy, PCI, or urgent coronary artery bypass graft surgery.

Heart Team discussion based on clinical status and the lack of further aortic involvement gave indication to conservative management.

In summary, our case report demonstrates an iatrogenic sinus of Valsalva dissection which occurred during PCI. 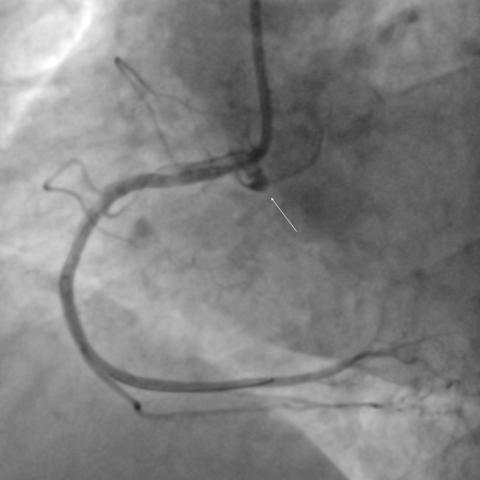 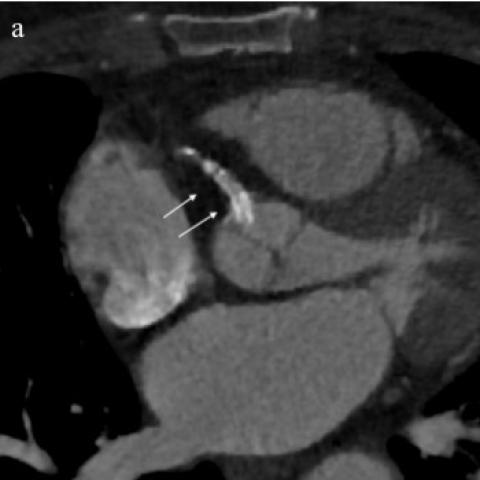 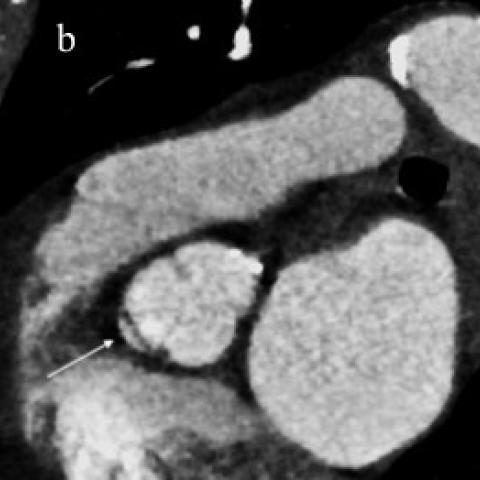 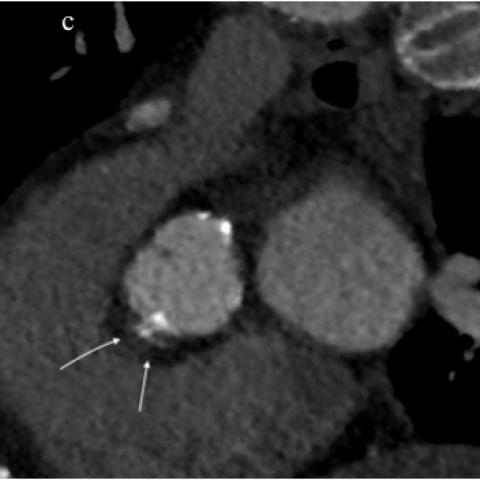 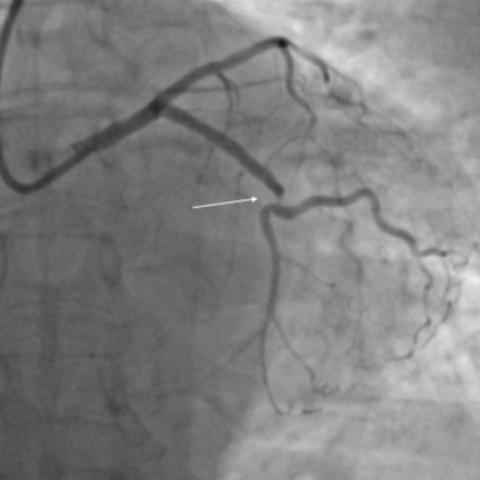 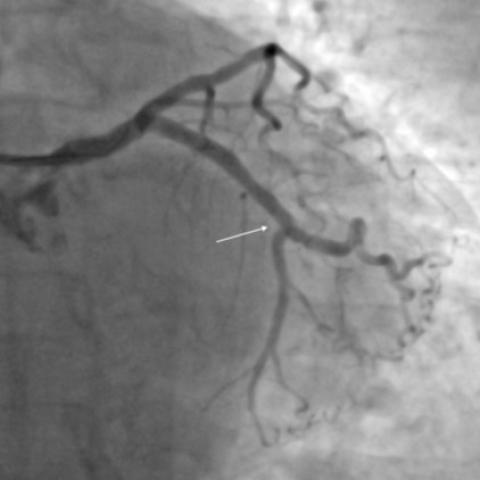 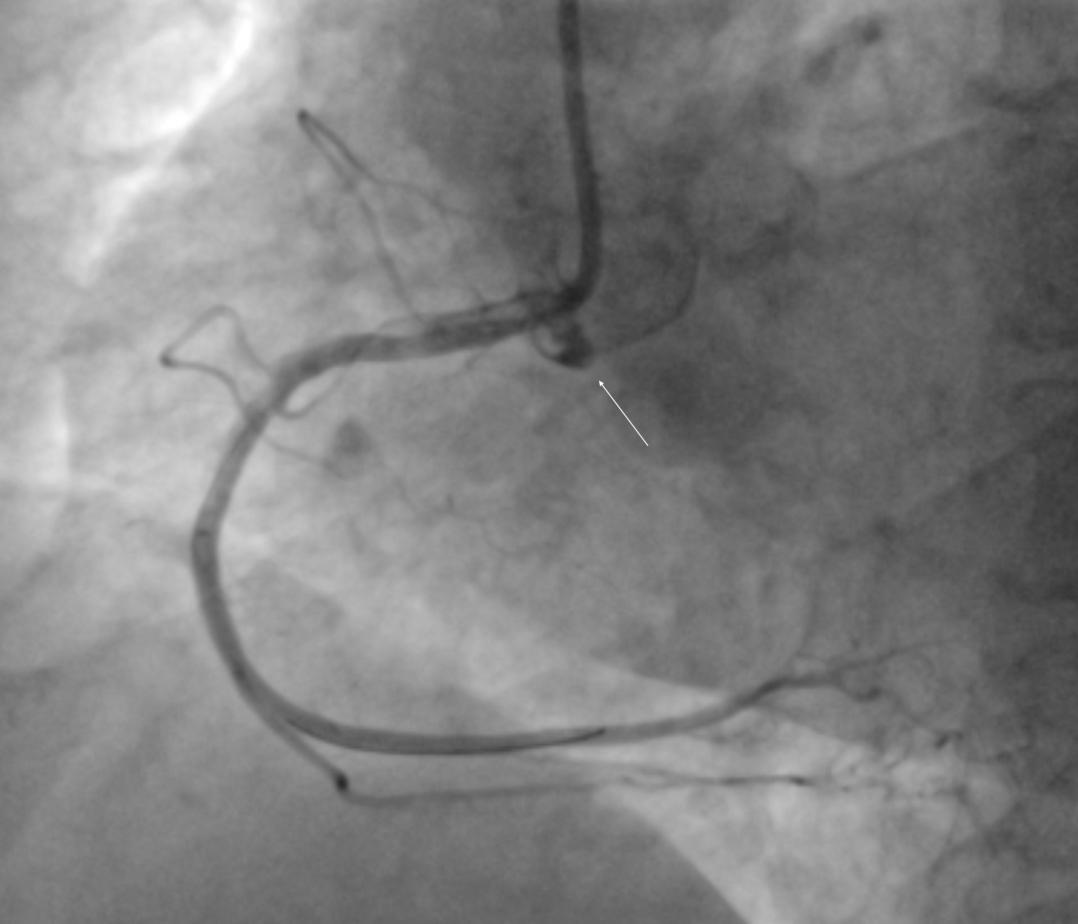 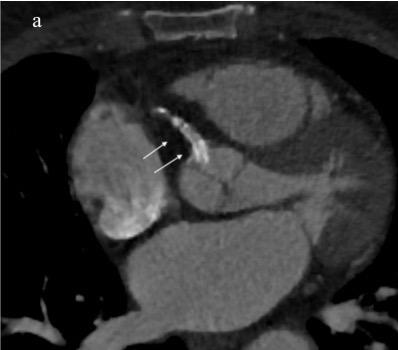 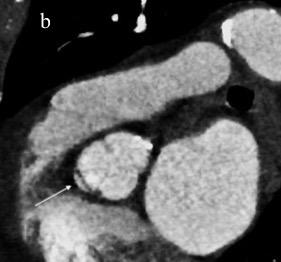 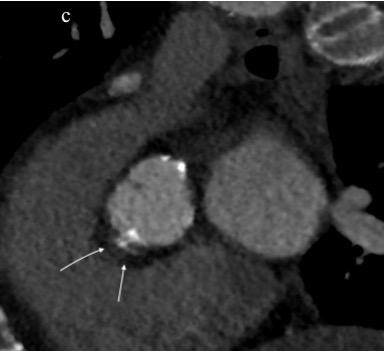 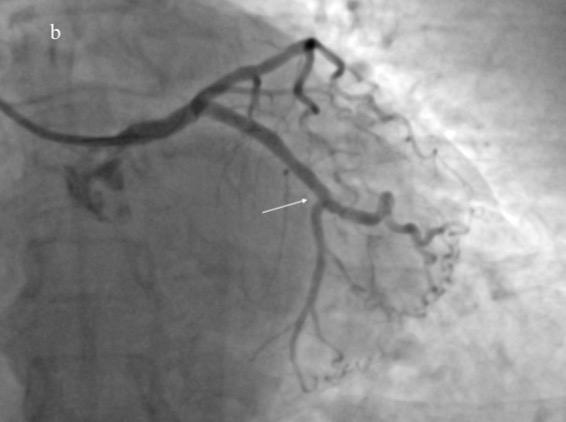