A 28-year-old male with no known comorbidities presented with painful soft tissue swelling along the posterior aspect of right ankle.

On the lateral heel (right) radiograph there is a positive parallel pitch line confirming the presence of a prominent bursal projection of the calcaneum. No evidence of any associated cortical erosions. (Figure 1). There is an increased density and convex posterior contour of the soft tissues at the level of Achilles tendon insertion. Lateral radiograph of the ankle also shows increased soft tissue density in region of pre Achilles fat pad. An associated heterotopic bone formation at the insertion of the Achilles tendon with intratendinous calcification of the distal Achilles tendon is noted. (Figure 2).

Sagittal T1w non-fat suppressed image of the right ankle shows a prominent bursal projection of the calcaneum and a distended retrocalcaneal bursa. (Figure 3).

Sagittal T1w fat-suppressed post-contrast image shows enhancing retrocalcaneal bursa, abnormal enhancement within the distal Achilles tendon and within the marrow of bursal projection and at the site of Achilles tendon insertion. (Figure 4).

Haglund syndrome is a common cause of posterior heel pain first described by Patrick Haglund in 1928[1,2].

The condition is caused by mechanically induced inflammation of the regional soft tissues of posterior heel including superficial bursa, Achilles tendinosis, retrocalcaneal bursitis due to repetitive compression from the back of the shoes in predisposed patients with prominent bursal projection of the calcaneum[3].

Haglund syndrome is clinically characterized by a painful soft tissue swelling the so-called ‘pump bump’ at the level of the Achilles tendon insertion. Patients range in age from young adult to elderly, are of either sex and have varying patterns of daily activity. The clinical diagnosis is often confusing as it may mimic other causes of hindfoot pain such as isolated retrocalcaneal bursitis or hindfoot involvement from systemic arthropathies like Reiter’s syndrome or rheumatoid arthritis. Hind-foot varus and pes cavus are predisposing factors[2,3].

Plain radiograph in a lateral standing position is useful to assess the prominent bursal projection of the calcaneum, the Haglund deformity. Different objective radiographic assessment methods including the posterior pitch line and Fowler’s angle are well described.

Assessment of the soft tissue abnormalities is crucial for making the diagnosis. Loss of a lucent retrocalcaneal recess is an indication of an underlying retrocalcaneal bursitis. The Achilles tendon is swollen and associated calcifications may also be seen. Superficial bursitis manifests as soft tissue swelling and convexity posterior to the Achilles tendon insertion.

MRI may be required for ambiguous or clinically equivocal cases and is more sensitive for assessing the cardinal soft tissue abnormalities namely Achilles tendinopathy and retrocalcaneal and retro Achilles bursitis. Increased signal intensity is demonstrated within the pump bump and Achilles tendon on T2 weighted sagittal images. Bony bump is well visualized on the sagittal T1w images. The detection of marrow oedema within the pump bump is likely to support the mechanical compression as the pathological mechanism in this condition.

Ultrasound is a feasible imaging modality that can be used as an alternative for detecting the soft tissue abnormalities. There is also a report of satisfactory pain relief after local injection of steroid into the retrocalcaneal bursa under ultrasound guidance[1,3,4].

Treatment is often conservative to start followed by surgical bursectomy and resection of the Haglund deformity[4].

Distinguishing the focal from systemic causes of posterior hind-foot pain is essential and are difficult to differentiate clinically. [1,3]. 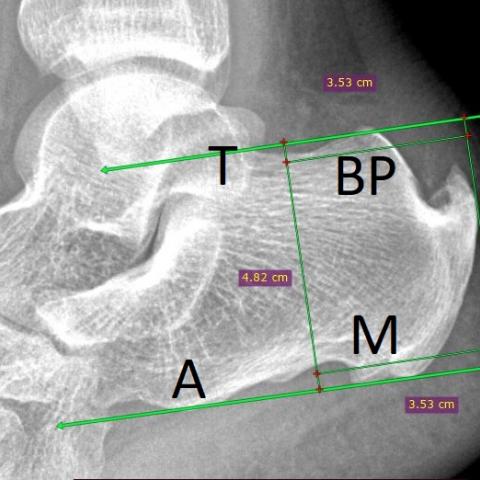 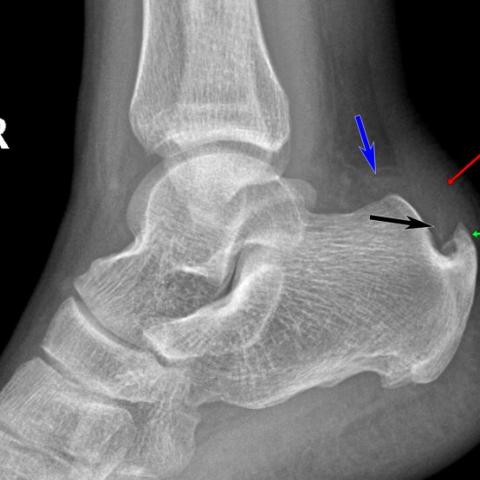 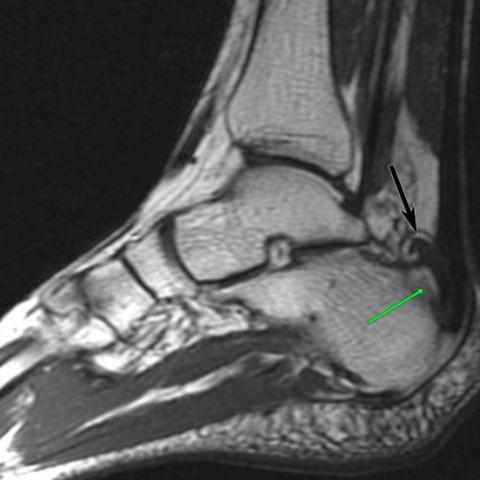 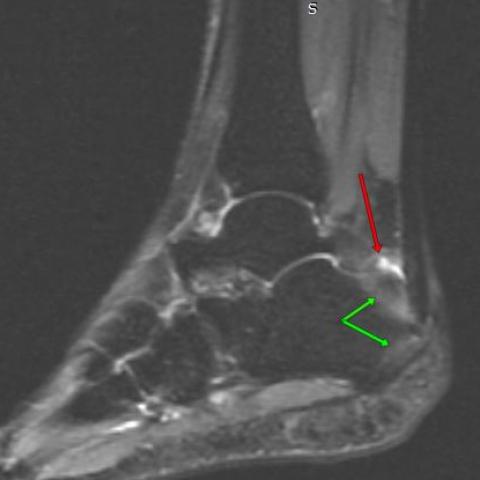 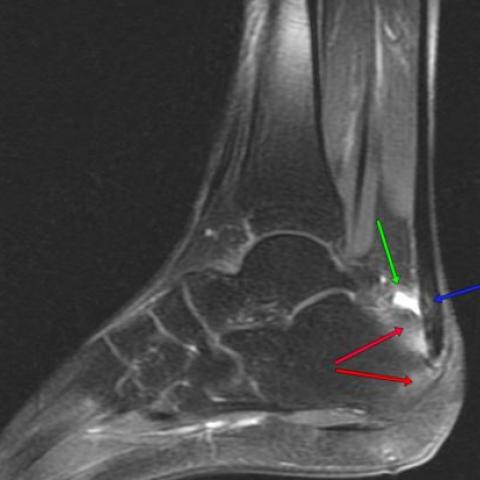 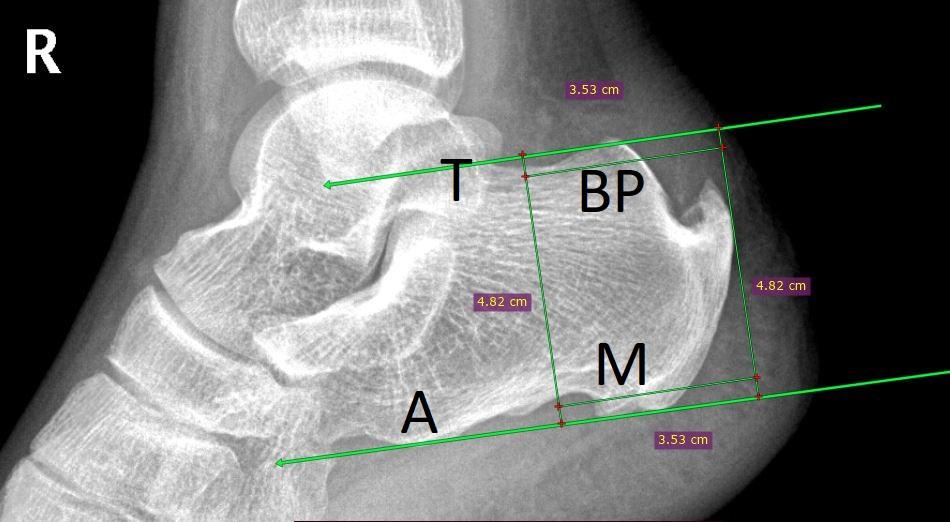 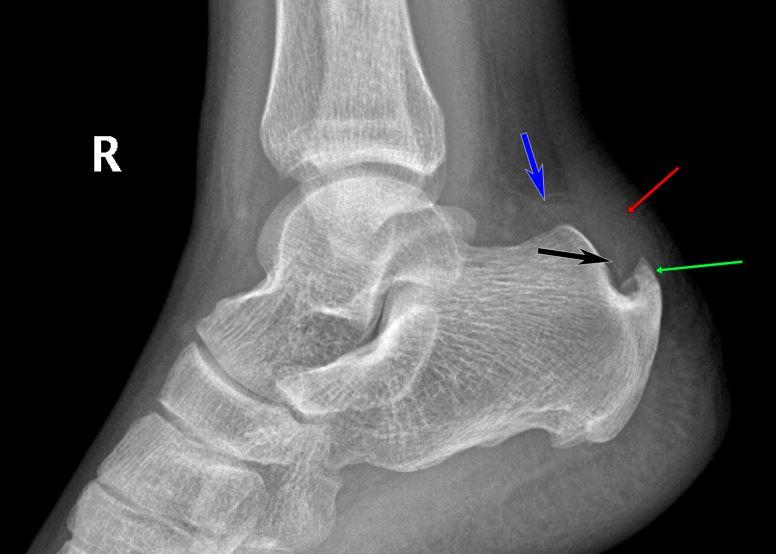 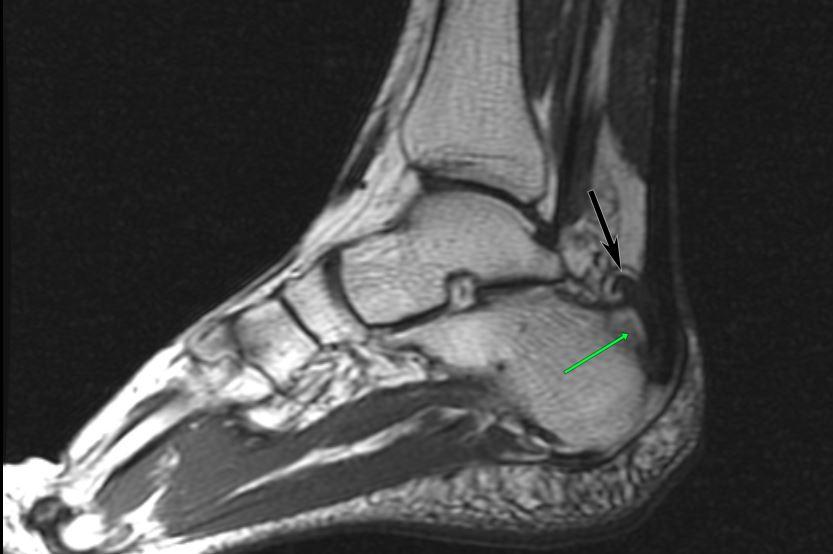 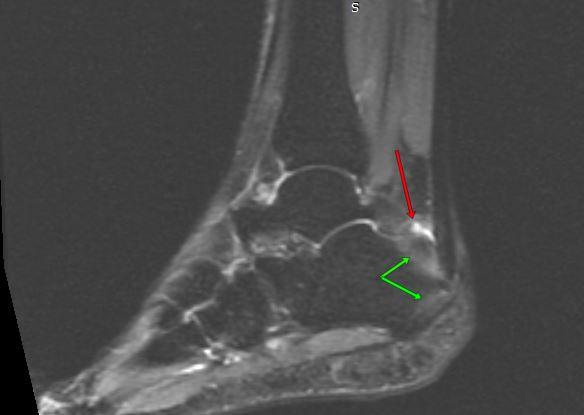 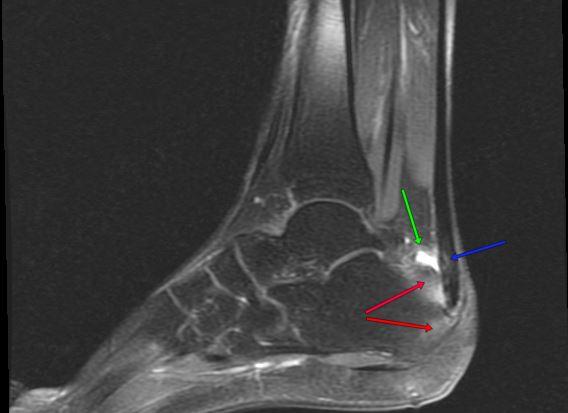