A 21-year-old inpatient admitted at a nearby psychiatric hospital with a history of depression and deliberate self-harm was brought to our hospital emergency room after ingestion of an unknown foreign body 8 days prior. She had been complaining of worsening left-sided abdominal pain and melena.

Chest and abdominal x-ray were initially performed which showed no abnormality. A CT (computed tomography) of the abdomen and pelvis was subsequently performed without oral or IV contrast. Initially, it was reported that there was no evidence of hollow viscus perforation or evidence of radiopaque foreign body in the small and large bowel.  Further reviews of the scan however showed an impression of a linear hypodensity within the greater curve of the stomach suspected to represent the foreign body. It was recognised that air appeared to be projected over the object which could lead to a false interpretation that the object was an artefact (Figure 1). However, numerous multi-planar reconstructions and window levels were adapted confirming the presence of a linear object.

Foreign body ingestion is observed most frequently in children (1). However, it can also present as a form of deliberate self-harm behaviour among adult psychiatric patients (2) (3). Complications of this include perforation, bowel obstruction and bleeding. The majority of ingested foreign body pass spontaneously (80%) with approximately 10-20% requiring endoscopic removal and 1% requiring surgical intervention (4).

The presentation of foreign body ingestion varies among patients depending on the size, shape and type of object ingested. Common clinical presentations include pain, vomiting, pharyngeal discomfort, upper or lower gastrointestinal bleeding or acute abdomen (5). The diagnosis is frequently confirmed on radiological imaging, and management dependent on the patient symptoms and the characteristics of the foreign body ingested.

An erect chest x-ray was initially requested to visualise the object and to rule out complications such as hollow viscus perforation. However, this technique is limited and mostly able to visualise objects that are radiopaque. A CT scan is a better imaging tool due to the ability to reproduce images in multiple planes and reviewing the images using different reconstruction algorithms.

The use of oral contrast may aid or hinder identification of swallowed foreign objects depending on the density of the object. We elected not to use positive oral contrast so as not to mask the foreign body. Intravenous contrast was also not administered since the focus was on identifying the foreign body presumed to be the most likely cause of the patient’s melena. The stomach was under distended at the time of scanning as the patient refused to drink a water load. Gastric distension with water might aid the diagnosis of foreign objects in the stomach.

In this patient’s case, it was also difficult to recognise the foreign body at first on the coronal and axial views. Air was projected over the foreign body which could have led to a false interpretation. Definite identification of a linear object was only made after a wider window width and level was used (Figure 2).

After the diagnosis was made on CT, an oesophago-gastro-duodenoscopy was performed which removed a 19cm green plastic knife from the stomach (Figure 3). 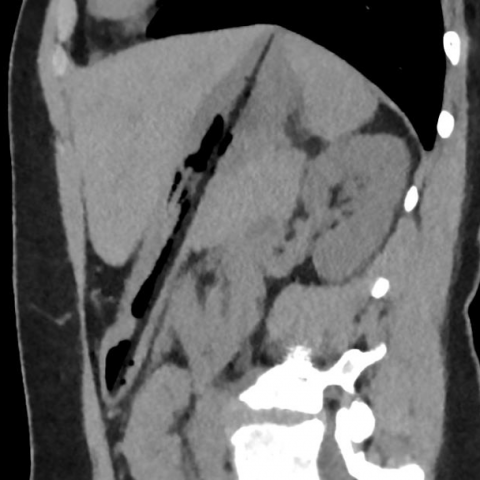 This sagittal view with abdominal window setting 30/350 shows a linear hypodensity present in the stomach. Air was projected over the object which could lead to a false interpretation that the foreign object is an artefact
Figure 2 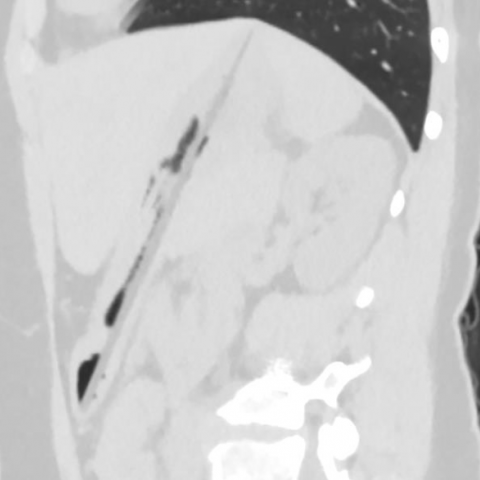 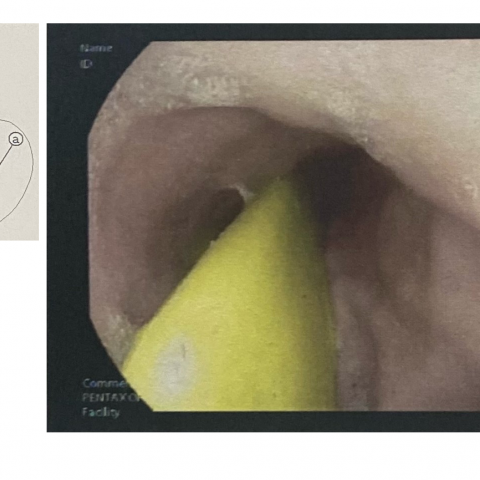 The 19cm green plastic knife that was found during the endoscopy, wedged between the fundus to the lower body of the stomach 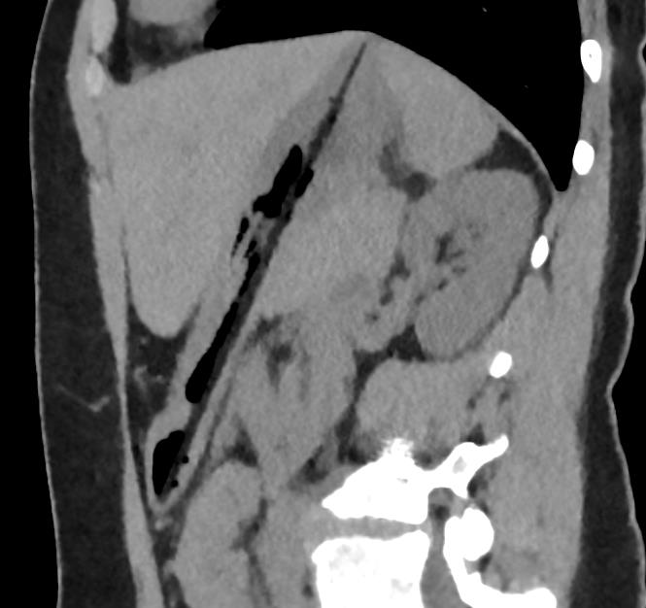 This sagittal view with abdominal window setting 30/350 shows a linear hypodensity present in the stomach. Air was projected over the object which could lead to a false interpretation that the foreign object is an artefact
Department of Radiology, Warrington Hospital, Warrington, United Kingdom, 2021 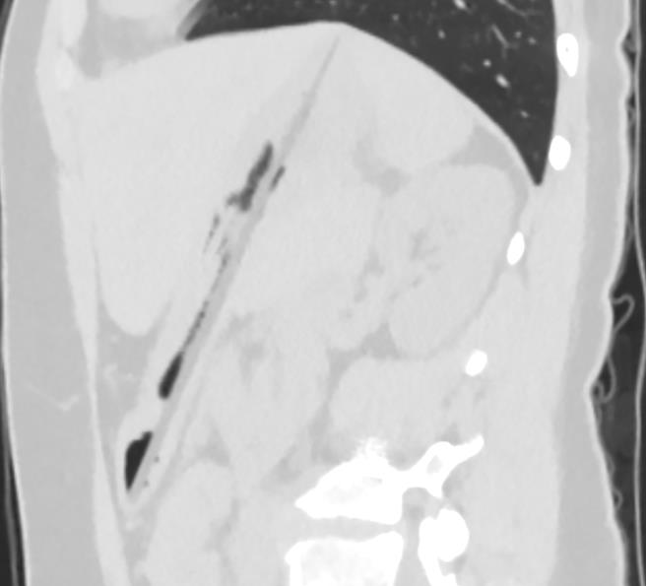 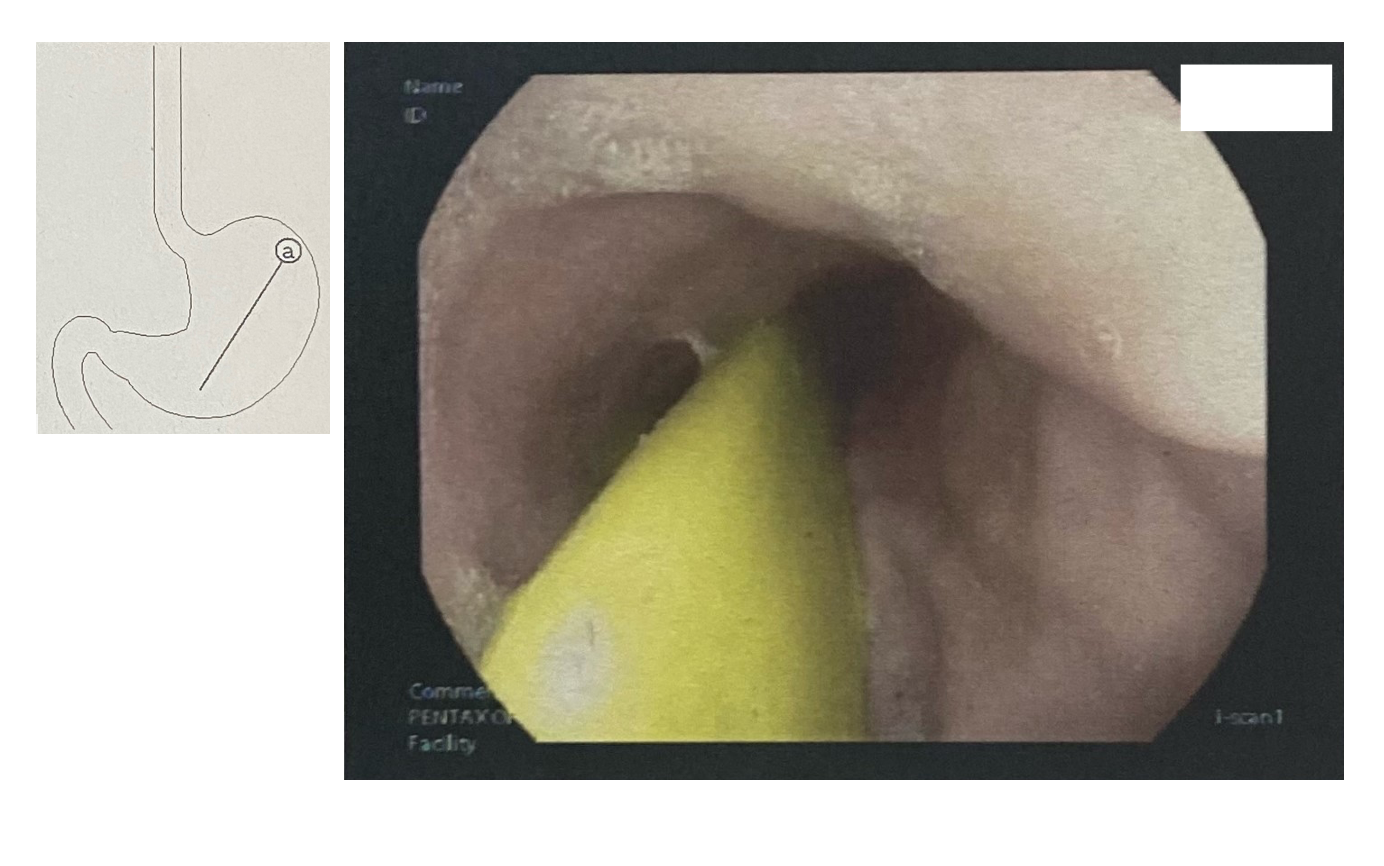 The 19cm green plastic knife that was found during the endoscopy, wedged between the fundus to the lower body of the stomach
Department of Radiology, Warrington Hospital, Warrington, United Kingdom, 2021