An MRI of the cervical spine was performed, demonstrating T2-hyperintens confluent bands in the dorsal columns of the cervical and upper thoracic spinal cord following an inverted V-pattern on axial images (Fig. 1). There was no enhancement of the lesions after gadolinium injection.

Anamnesis revealed heavy N2O abuse leading to the diagnosis of functional cobalamin deficiency with associated Subacute Combined spinal cord Degeneration (SCD). Cobalamin deficiency may be due to nutritional deficiencies, absorption abnormalities, or drug intake (e.g. N2O) [1–3]. N2O is not only a well-known anaesthetic gas, it is also the seventh most popular recreational drug worldwide, recently gaining in popularity because it is “legal”, cheap, fast-acting and wears off quickly after use without after-effects [3–4]. N2O can inactivate cobalamin as a coenzyme in the formation of myelin sheath phospholipids and DNA/myelin synthesis leading to intra-myelin oedema, demyelination and eventual gliosis in the dorsal columns, the spinocerebellar and lateral corticospinal tracts of the cervical and upper thoracic spinal cord [1–3,5]. The earliest manifested symptoms are symmetrical paraesthesia in the distal extremities, often associated with gait abnormalities and balance disorders. In more advanced stages, hyperreflexia, muscle weakness, and eventually spastic paraparesis or tetraparesis are seen [1,2].

The diagnosis can be made by a combination of MRI and blood tests. Blood tests show normal or reduced levels of cobalamin with increased upstream metabolites (methylmalonic acid [MMA] and homocysteine) [2]. The typical early MRI finding in SCD is a symmetric pattern of T2-hyperintensity in the cervical and upper thoracic spinal cord involving the posterior column (i.e. inverted V-sign). Later, T2-hyperintensity may also be seen in the lateral columns [1,2]. A decreased T1-weighted signal and contrast enhancement after gadolinium administration can also be observed [1–3,5]. After initiating cobalamin substitution, the abnormal MRI signals might either disappear after months or persist, especially in more advanced cases [1,2]. SCD caused by N2O is treated by halting exposure to N2O and administering cobalamin supplementation [1,3]. The neurological symptoms may clinically improve over a period of at least 3 to 12 months but are in some advanced cases permanent, including lifelong paraparesis [1,3]. The symptoms of the patient showed a slow recovery after ceasing the use of N2O combined with oral cobalamin supplementation.

SCD is an uncommon complication of cobalamin deficiency, especially in young people. SCD has been increasingly encountered in the past few years as a result of N2O abuse [4]. Physicians/radiologists should be aware of this condition as the presenting symptoms are often non-specific and, if missed, can lead to serious permanent neurological complications. 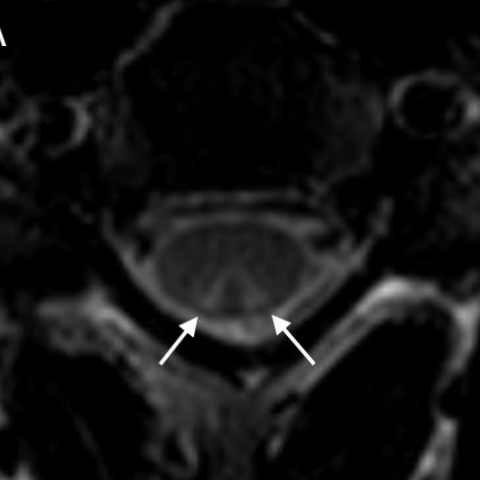 Axial T2W MRI of the cervical spine. On this axial T2-weighted image performed at C3-C4 level an inverted V-shaped hyperintensity is seen dorsally in the spinal cord (short arrows) 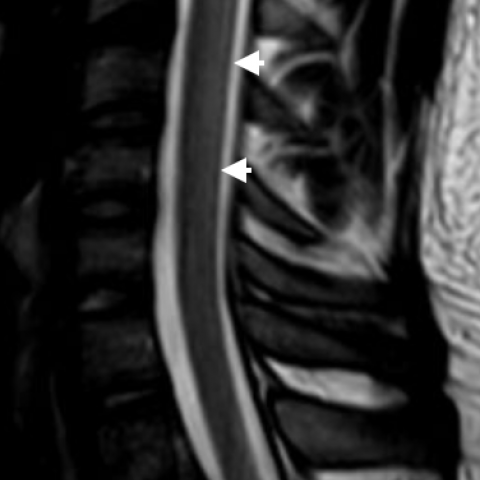 Sagittal T2W MRI of the cervical spine. On this sagittal T2-weighted image a subtle hyperintense band is seen in the cervical and upper dorsal spinal cord (arrowheads) 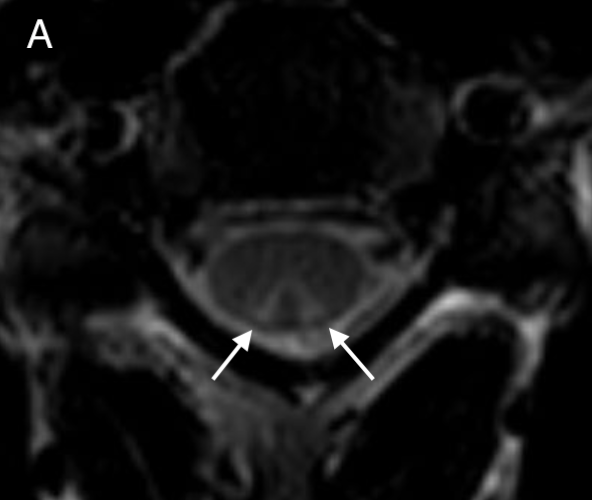