A 24-year-old woman who is normally fit presented to A&E with a three-week history of shortness of breath as well as chest pain. Pain was sharp and pleuritic in nature. This was preceded by a one-week history of a viral upper respiratory tract infection. She had no prior medical history.

Cystic hygromas, a type of lymphatic malformation, are fluid-filled sacs that arise from a lymphatic system blockage. They are benign malformations and the vast majority are discovered during early childhood though some can be seen on ultrasound foetal scans. There have been links with congenital syndromes such as Down’s syndrome, and other aneuploidic anomalies, as well as congenital cardiac anomalies e.g. aortic coarctation. The individual in this report did not have any of the above-mentioned conditions nor any other lymphatic/vascular malformations.

Clinical picture is usually from a parent or guardian concerned about a painless soft mass. Although, when symptomatic the presentation largely depends on location and results from compression of nearby structures. It can range from serious, such as airway compromise, to mild discomfort over the affected region as well as purely cosmetic. Symptoms such as discomfort, chest pain, cough and dyspnoea can be associated with mediastinal involvement; however, patients can also be asymptomatic [3].

Imaging alone cannot offer a definitive diagnosis of hygroma as most cystic mediastinal masses often look similar. Imaging does verify the cystic nature, give further information on relation to other nearby structures and guide treatment. Computed tomography (CT) normally shows well-delineated cystic lesions without any calcifications. On magnetic resonance imaging (MRI) the lesions are typically low signal on T1-weighted images and high on T2-weighted images.

Management is largely surgical with complete resection through a thoracotomy being the preferred option. Sclerotherapy - using OK-432 agents - has been used in cervical cystic hygromas; however, it is not the preferred method of treatment in solitary mediastinal lesions. Radiotherapy is another therapeutic option, though due to the possibility of damage to neighbouring structures, it is of little use [4].

In this case the radiological findings were not in keeping with those typically seen in cystic hygromas but instead seemed like a soft tissue mass. Histology showed irregular vascular-like spaces with occasional endothelial lined lumens with some focal thrombi. The endothelial lesions stain positive with actin and desmin within the wall and positive with CD31 in the lumen. Findings in keeping with cystic hygromas. Due to the lack of D240 staining of the endothelial cells the lesion could be a vascular hamartoma.

This goes to show that the classical presentation is not always present and to keep a wide index of suspicion. 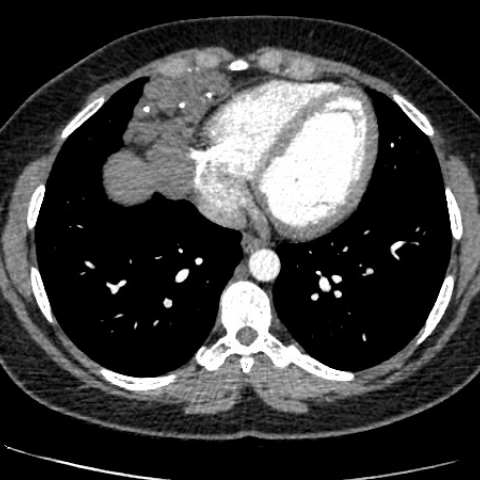 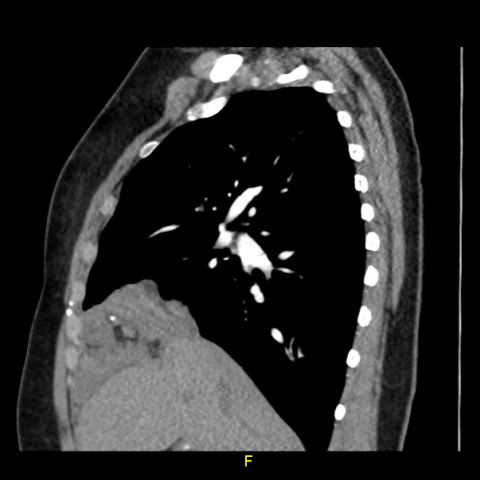 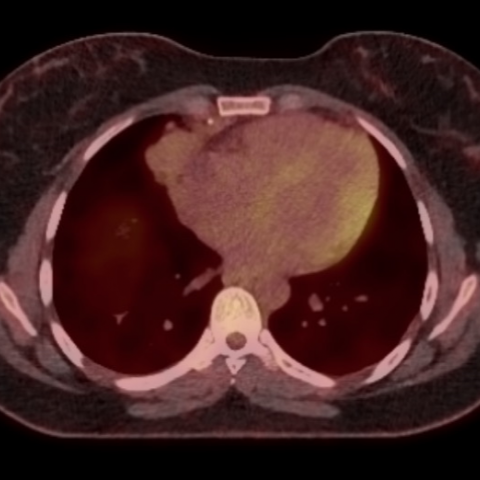 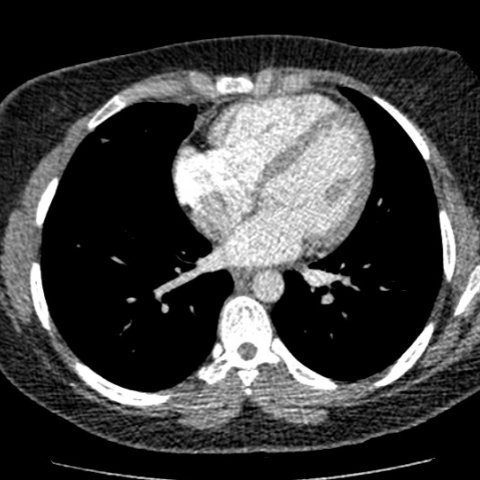 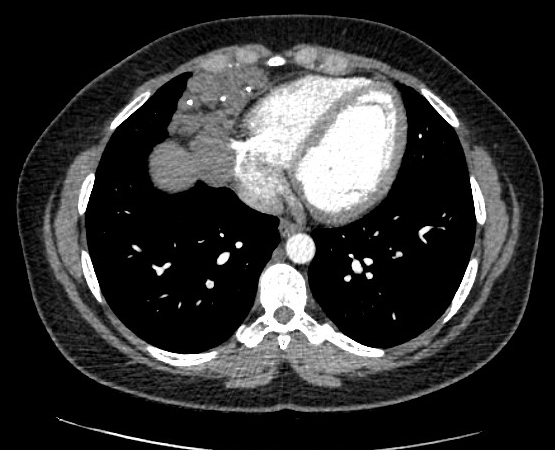 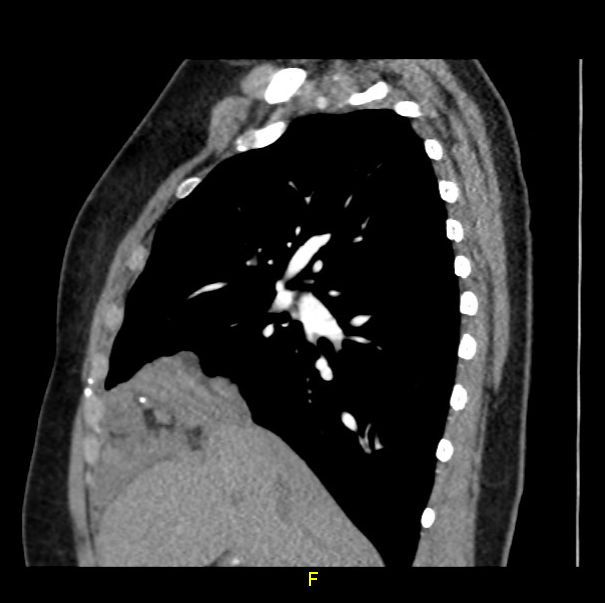 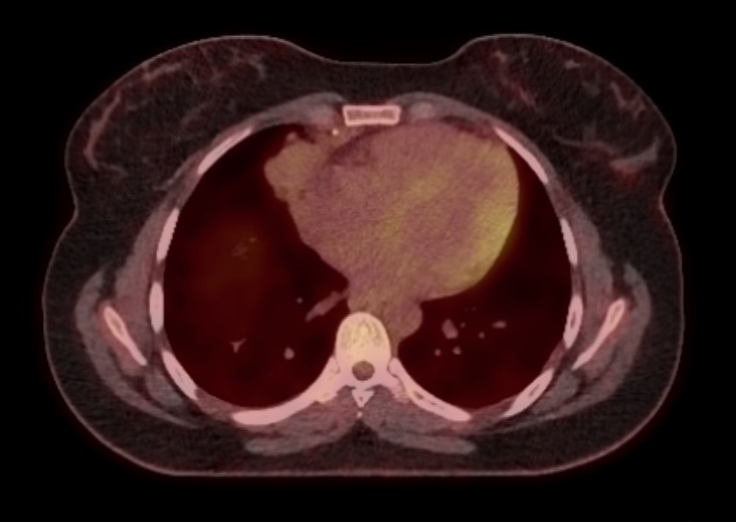 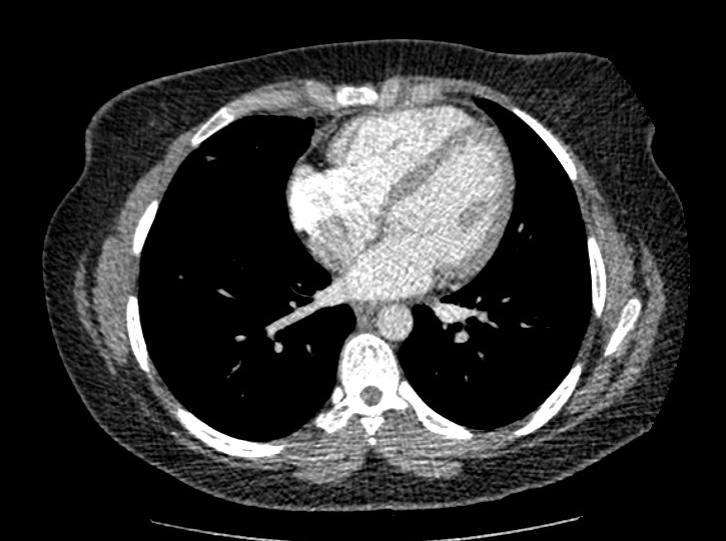