Cecal bascule: A rare cause of bowel obstruction

A 74-year-old male patient was admitted to the emergency department due to severe diffuse abdominal pain and nausea for one day, without vomiting or obstipation. There was no history of prior abdominal surgeries. The physical examination revealed tenderness on the right upper quadrant.

A computed tomography (CT) scan with intravenous contrast administration was performed. The cecum was dilated (maximum diameter of 9.5 cm) and in an anterior and superior abnormal position, without imaging signs of torsion in the mesentery (Figs. 1 and 2). These findings were not present in a previous abdominal CT examination, done three years prior (Fig. 3). The rest of the colon and the small bowel were not dilated. A small amount of free peritoneal fluid was present but there were no signs of bowel ischemia.

These findings were suggestive of a cecal bascule. The patient underwent exploratory laparotomy, which confirmed the diagnosis. Lysis of adhesions and cecopexy were performed and the post-operatory period was uneventful.

Cecal bascule is a rare subtype of cecal volvulus, representing only 10 to 17% of all cecal volvulus [1] and causing 1 to 2% of all large bowel obstructions [2].  Three types of cecal volvulus have been described. Type 1 is characterized by axial torsion of the cecum, but it remains in its normal anatomical location. In type 2 volvulus, a loop involving the cecum and a portion of the distal ileum develops, and the cecum can be seen in an ectopic location. In type 3 or cecal bascule, the cecum folds antero-superiorly without a torsion component [3].

Cecal bascule was first described in 1938 by Weinstein [4]. This entity has a slightly male predominance and a peak incidence around 55 years of age [5].

The major risk factors for the development of a cecal bascule are increased cecal mobility [1], and adhesions formed between the cecum and the ascending colon [2]. These adhesions may be congenital or acquired, due to previous surgery or inflammation [5].

The development of cecal distension requires the presence of a competent ileocecal valve [2].  In the absence of treatment, cecal distension can complicate with bowel ischemia and perforation [5].

The most common symptoms of cecal bascule include abdominal distension, pain, and vomiting. The pain may be diffuse or localized to the right quadrants.

Imaging plays an important role in the diagnosis of cecal bascule. Abdominal x-ray is important as a first-line exam in the emergency setting when a bowel volvulus is suspected, however, CT is the most important imaging tool in the diagnosis [5]. These techniques can show displaced cecum, associated with distension, and, typically, reduced amount of gas in the distal colon. Since there is no twist of the mesentery, the typical bird beak sign and whirl sign seen in other types of cecal volvulus are absent in the cecal bascule [3,5].

As with the other types of cecal volvulus, the treatment of cecal bascule relies on surgery. It may include right hemicolectomy or reduction with cecopexy, to avoid recurrence [6].

-Cecal bascule is a rare type of cecal volvulus, characterized by anterior folding of the cecum without a torsion component;

-The diagnosis of cecal bascule can be challenging;

-Imaging is important in the diagnosis of cecal bascule and in the differentiation between the types of cecal volvulus. 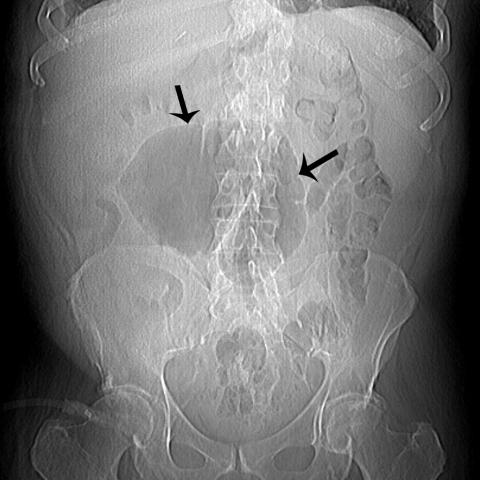 CT topogram reveals an abnormally positioned and distended cecum (arrows). There is no dilatation of the remaining large bowel
Figure 2 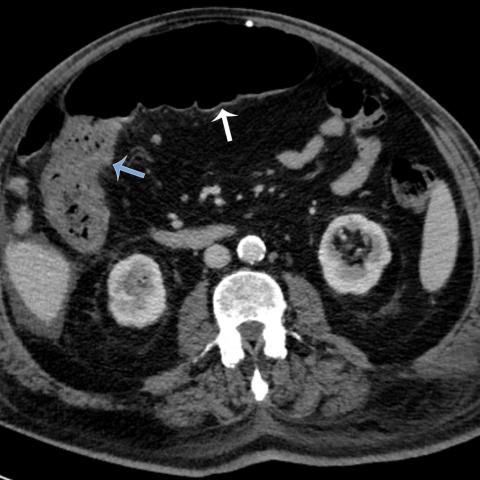 Axial CT image after intravenous contrast (portal phase) reveals cecum (white arrow) in a medial and anterior position. There is thickening of the ascending colon walls (blue arrow) but no pneumatosis coli or pneumoperitoneum. There is also free fluid in perihepatic location 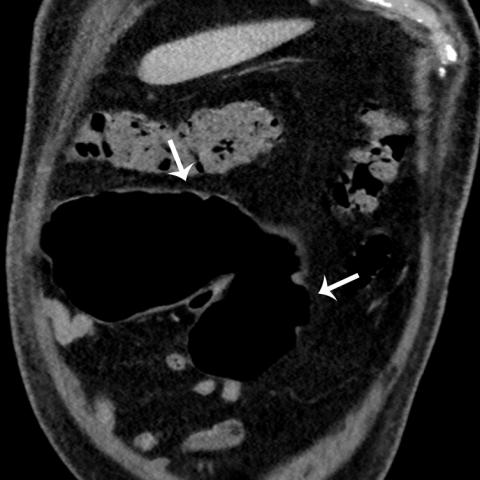 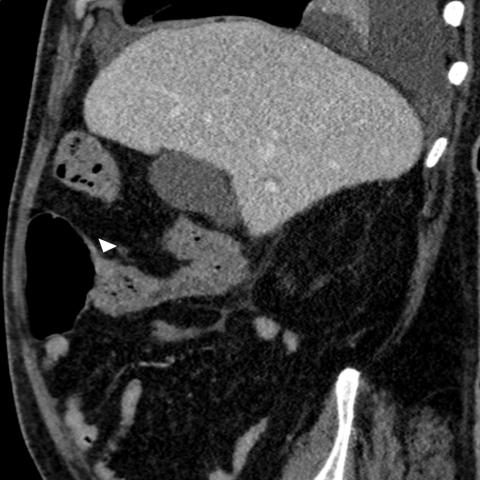 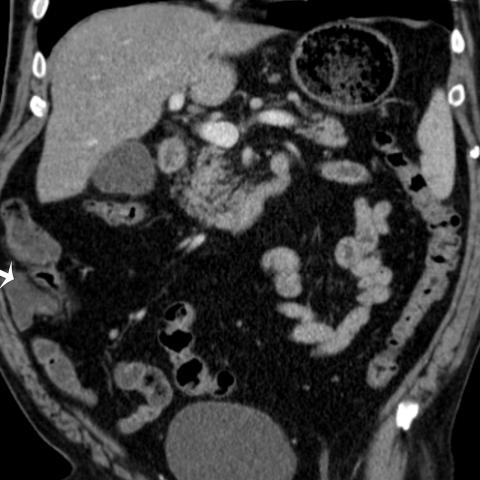 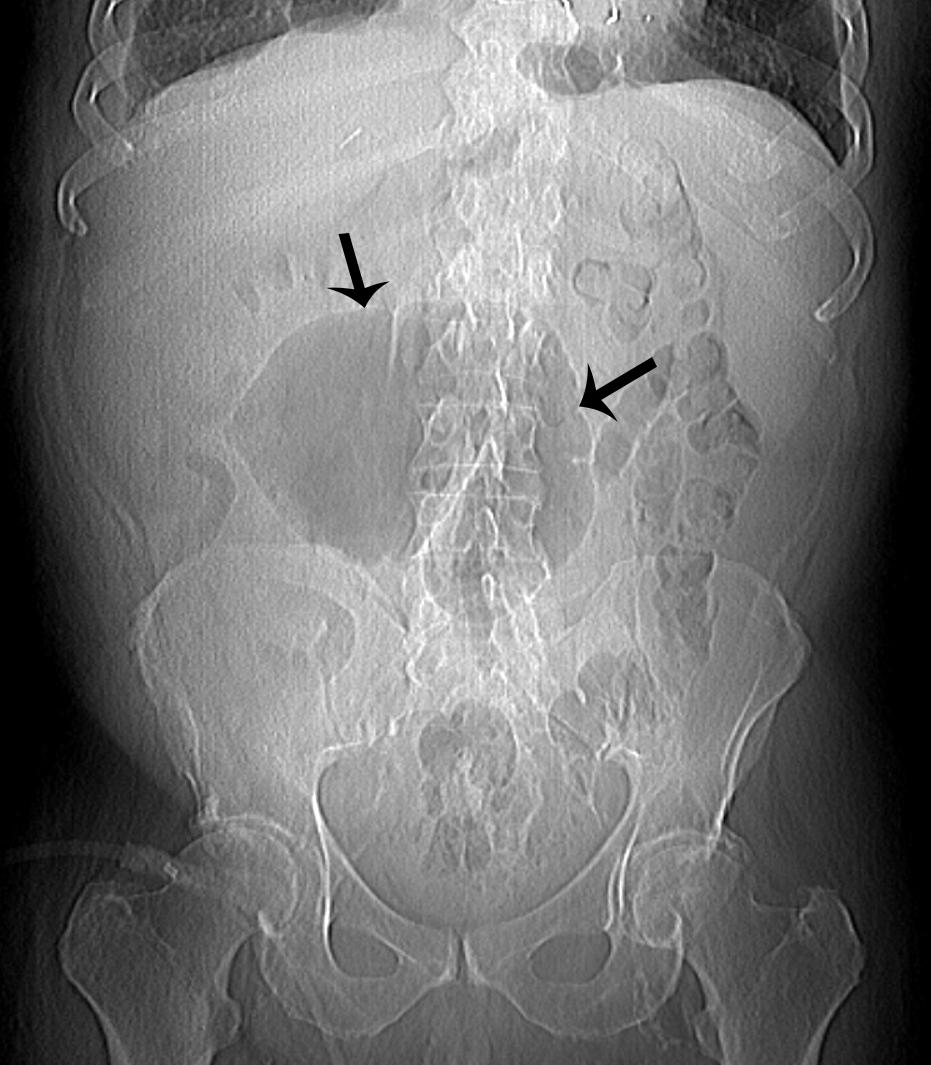 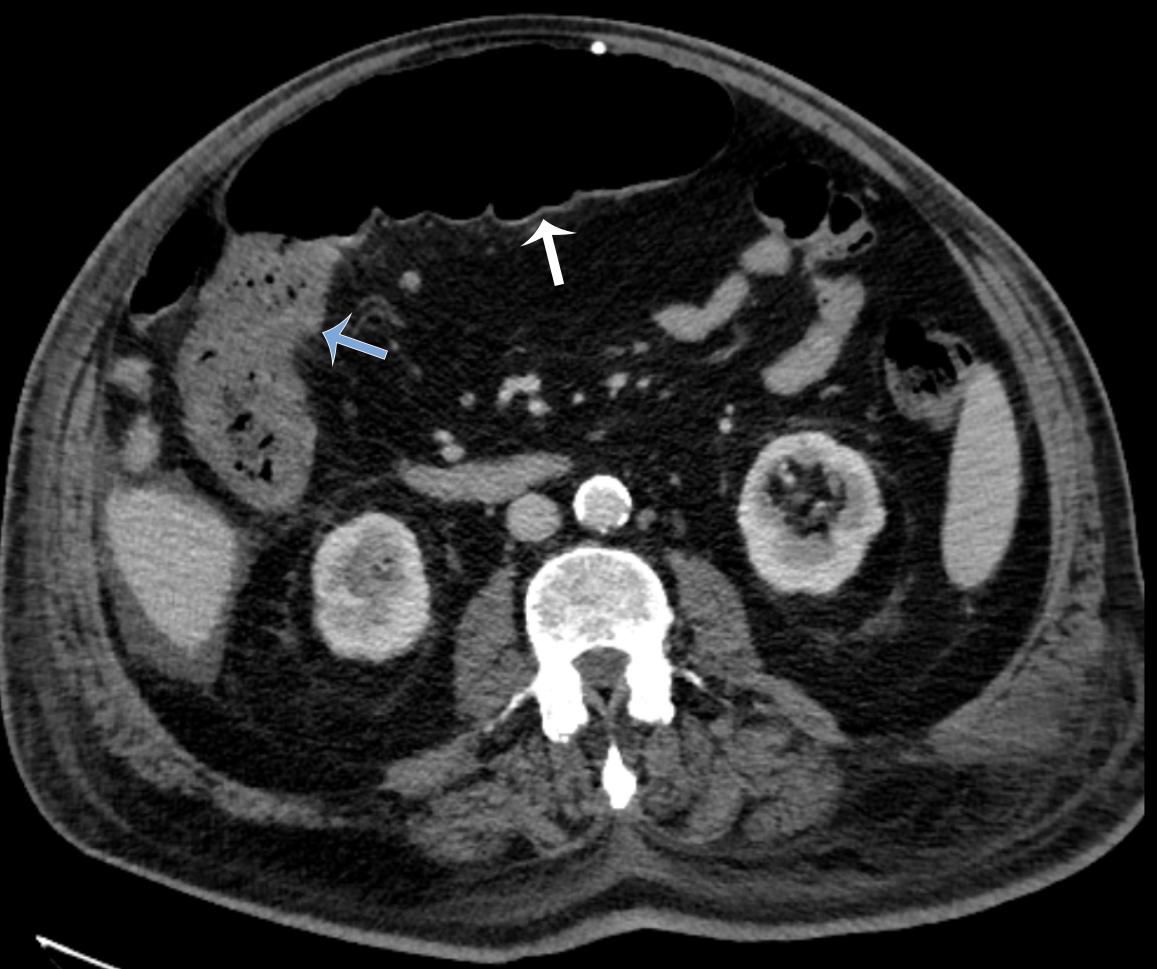 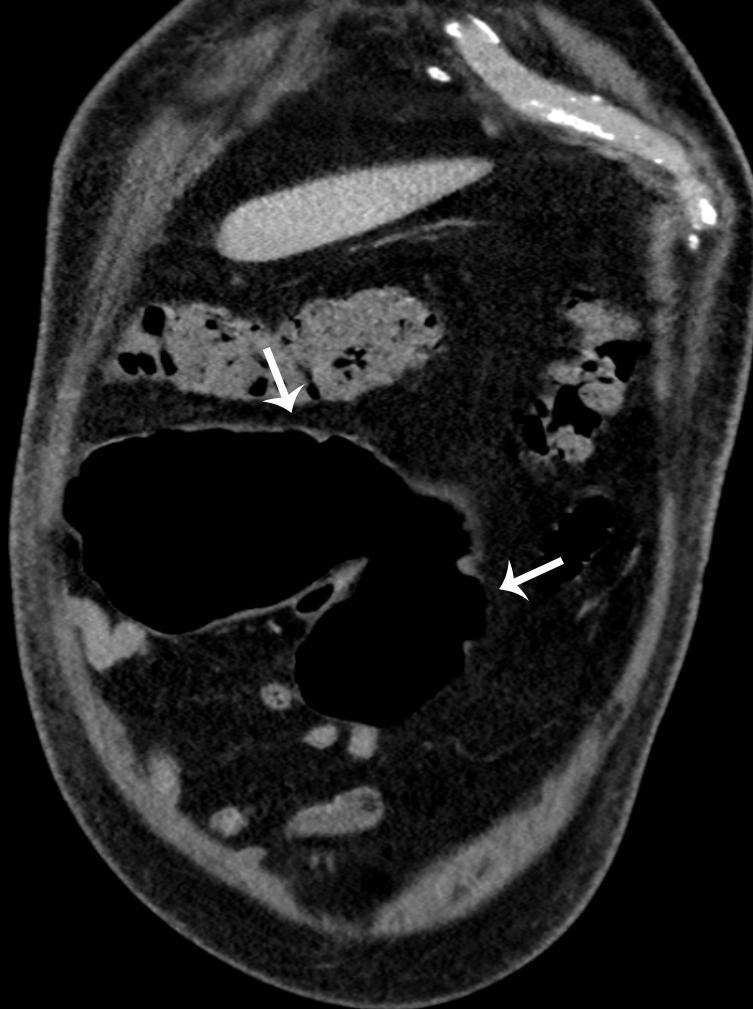 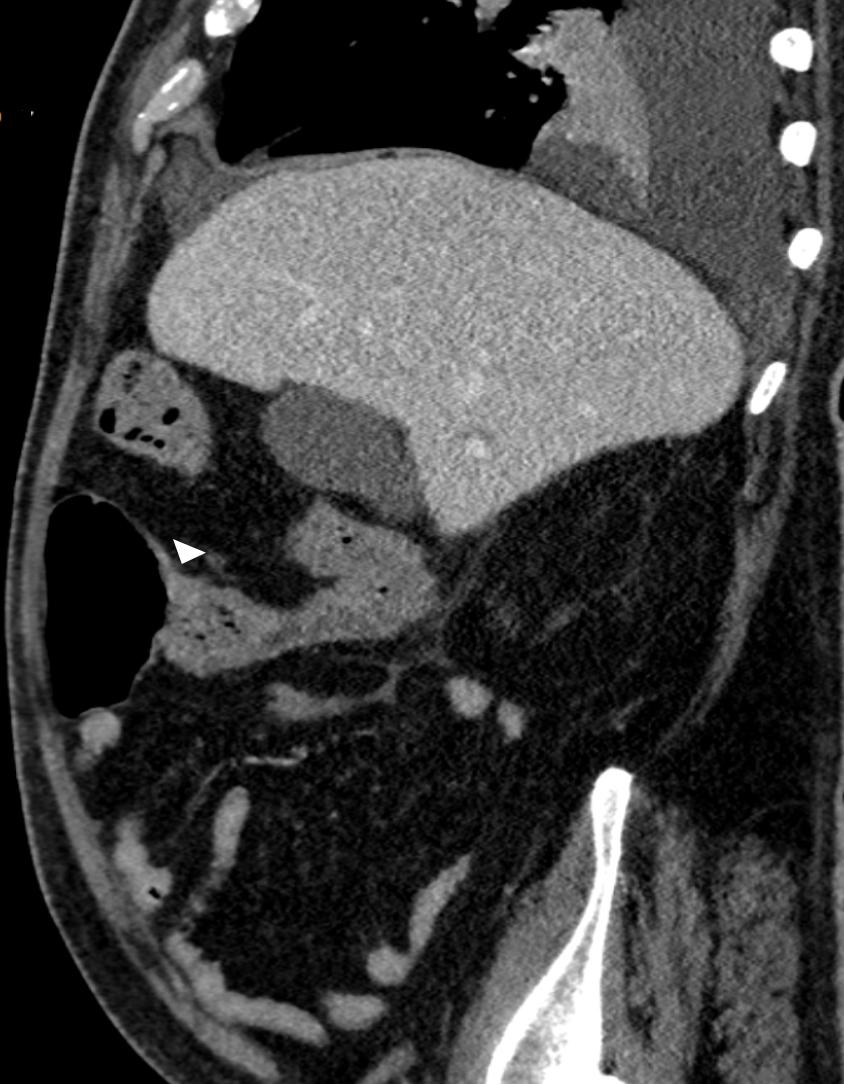 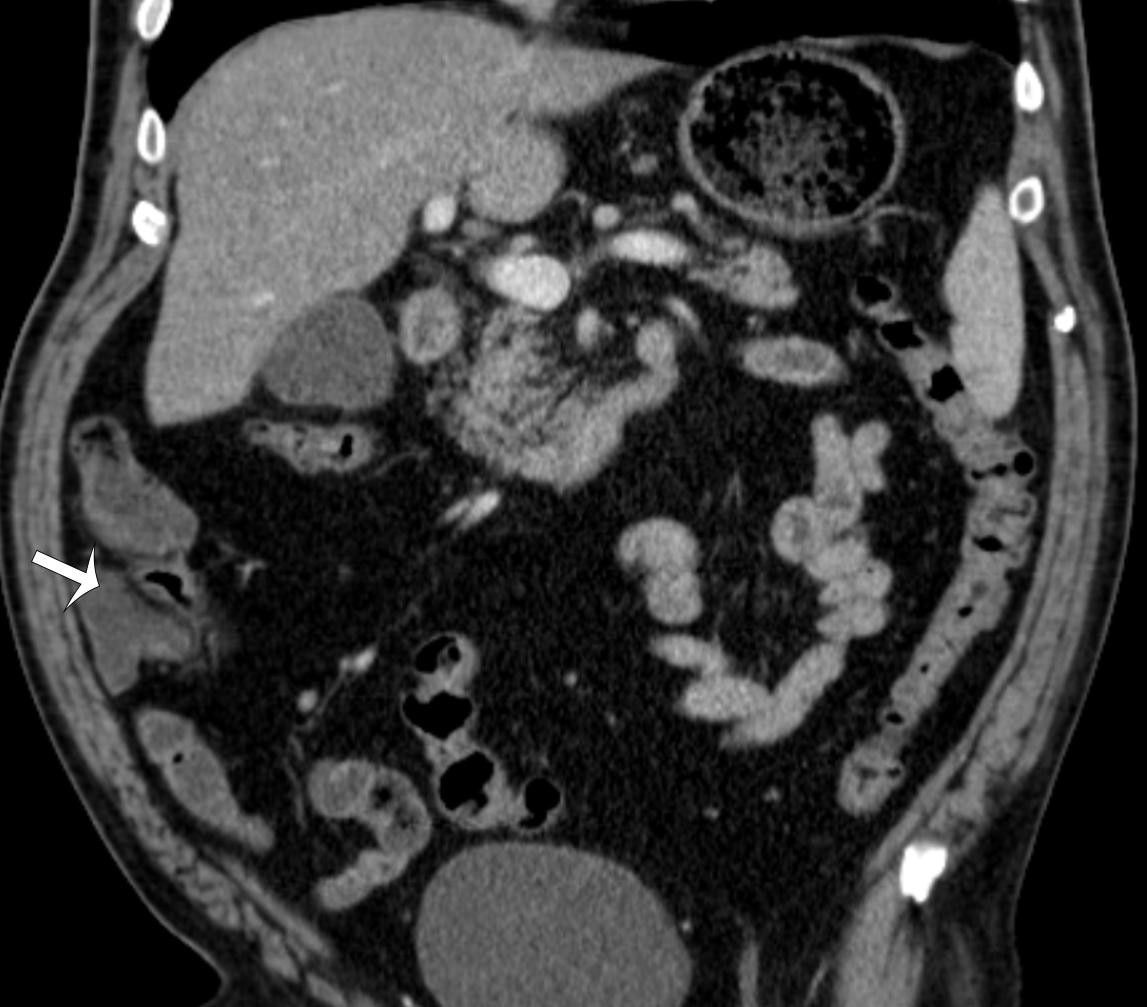