A 62-year-old woman with no PMH was referred to our emergency department by her primary care physician after the finding of elevated pancreatic enzymes (Amylase 518 U/l,  Lipase 469 U/l) during the diagnostic workup of subacute onset abdominal discomfort, as well as a single episode of sudden epigastric pain a month ago.

A CT scan was obtained with the clinical suspicion of pancreatic malignancy. A baseline PET-CT FDG scan was ordered for further characterisation of the findings on CT.

CT images show a 4 x 4,5 cm diffusely homogeneous mass in the pancreatic uncinate process and head. No secondary dilation of the main pancreatic duct is seen and the vascular structures around the mass and the head of the pancreas appear preserved. The mass is strongly hypermetabolic on PET-CT (max. SUV 9,9). (Figures 1 and 2)

In the chest, numerous subpleural pulmonary nodules can be seen in the lower lobes bilaterally in association with focal areas of pleural thickening. These lesions showed a lower metabolic activity on PET-CT than the aforementioned ones (Figures 1 and 3). PET-CT images also showed hypermatabolism in the retroesophageal area at C6-C8 level, with no corresponding morphologic findings on CT (not shown).

An US-guided biopsy of one of the kidney lesions and a EUS-guided biopsy of the pancreatic mass were obtained, with the former being diagnostic of IgG4-related tubulointerstitial disease (immunohistochemistry showed 35 IgG4-positive cells per HPF, and a IgG4/total IgG proportion of 80%). The latter was insufficient for diagnosing IgG4-related pancreatitis but was negative for malignancy and suggested chronic inflammation, with EUS also showing beading of the main pancreatic duct, supporting the diagnosis of IgG4-related autoimmune pancreatitis. After treatment with methylprednisolone pulses and posterior therapy with prednisone and metotrexate, lab results were much improved (Amylase 87 u/l, Lipase 35 u/l, eGFR 79) and the patient was released from hospital.

IgG4-related disease (IgG4-RD) is a systemic, chronic disorder characterised by fibro-inflammatory infiltration by IgG4-secreting plasma cells and lymphocytes that can affect virtually every tissue in the body. The term was coined when IgG4-related autoimmune pancreatitis (IgG4-R AIP) patients were found to have extrapancreatic manifestations [1].

Clinical manifestations of IgG4-RD can be numerous—as numerous as the number of organs the disease can infiltrate—the most common being AIP. Patients with AIP present with nonspecific symptoms such as abdominal pain, jaundice or weight loss. At imaging, there are two main patterns: diffuse (more common, with the classic ‘sausage like’ appearance and a thin hypodense halo ring) and focal AIP (with a mass-like appearance that can be easily mistaken with pancreatic carcinoma).  [1,2]

Several findings are taken into account in order to diagnose IgG4-R AIP: imaging findings, elevated serum IgG4, pathology (lymphoplasmacytic infiltration and fibrosis), other organ involvement and response to steroid therapy [3]. Imaging plays an important role since laboratory and pathologic findings are often insufficient as was shown in our case. The area affected by focal AIP usually appears hypoechoic at US and hypoattenuating on CT with delayed enhancement owing to the presence of fibrosis. The mass will not invade regional structures, and the main pancreatic duct can appear beaded. PET-FDG can show high uptake that disappears after steroid treatment. PET-FDG has also been used in occasions to differentiate benign and malign pancreatic lesions, although this indication is not well established yet [4]. For this matter, secretin-enhanced MRCP can be another key player in the years to come. It focuses on defining the relationship between the mass and the main pancreatic duct (MPD). If the MPD is seen to penetrate through the mass without alteration—the so-called ‘duct-penetrating sign’—a malign entity will be highly unlikely [5].

Renal involvement is seen in 1/3 of patients [2]. The most common imaging pattern is multifocal, with bilateral hypodense round or wedge-shaped cortical lesions. Pathology shows tubulointerstitial nephritis with fibrosis and IgG4-positive immunochemistry. Clinically patients may have renal function impairment with no hematuria, with eGFR recovery after steroid therapy.

Patients with any findings of active IgG4-RD should be administered corticoisteroid therapy. Response is usually seen in 2-4 weeks time, with most patients following a chronic course that often relapses after the interruption of therapy. Complications in untreated patients include biliary obstruction, cirrhosis, diabetes, subacute constitutional syndrome [6]. 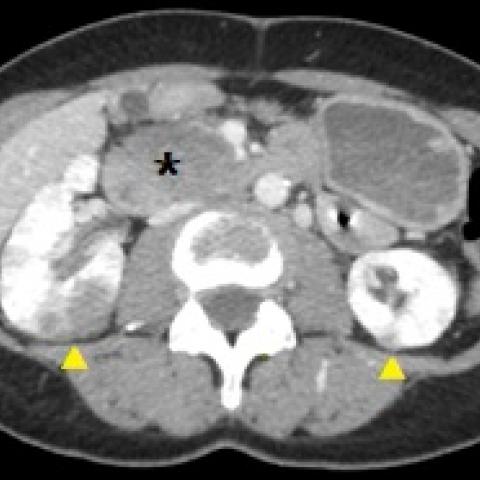 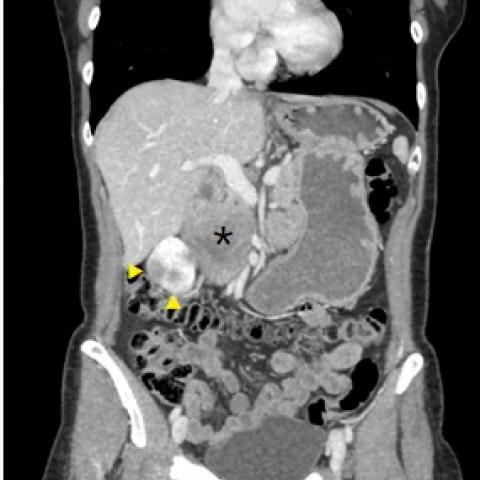 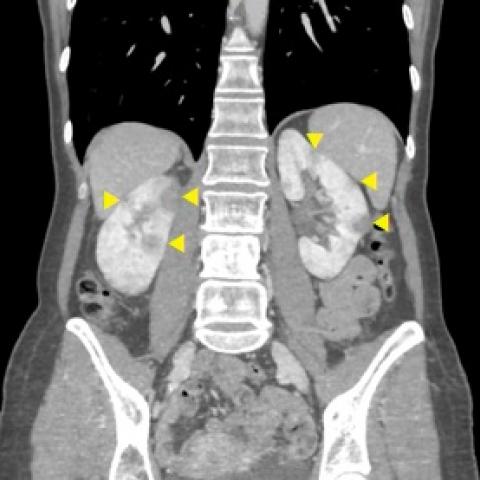 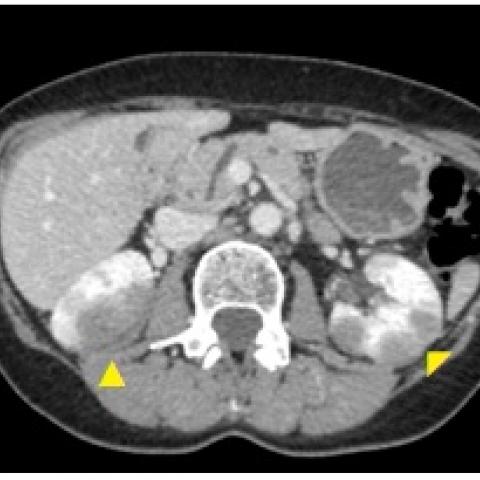 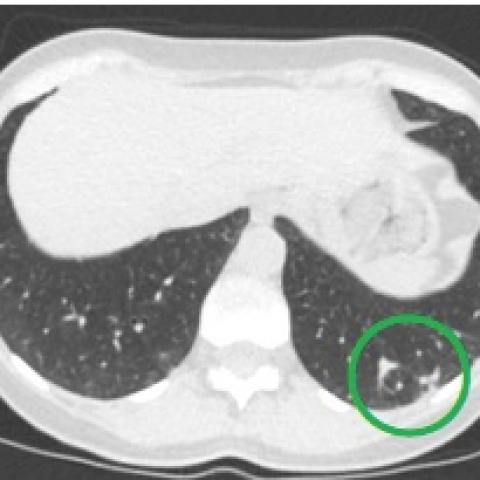 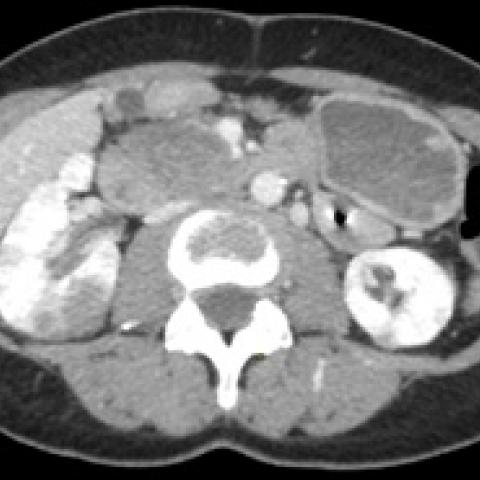 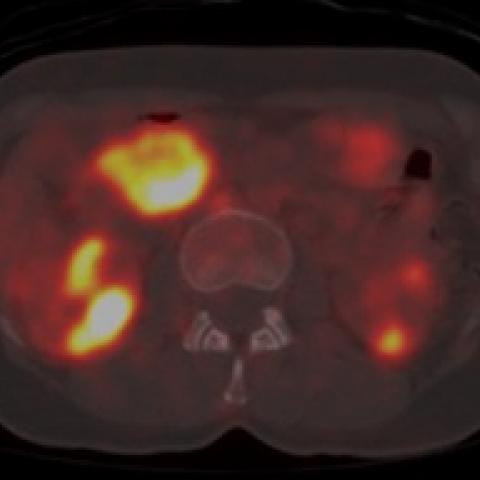 PET-CT FDG of the same area in 2a. The hypermetabolic nature of both pancreatic and renal lesions can be seen. The pancreatic mass shows a maximum SUV of 9,9
Figure 3

CT (a) and PET-CT (b) comparison of pulmonary involvement 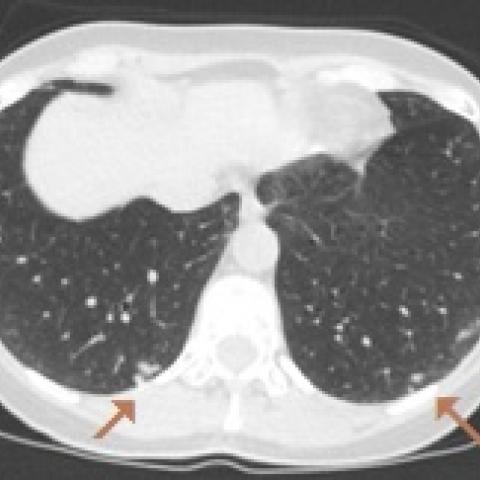 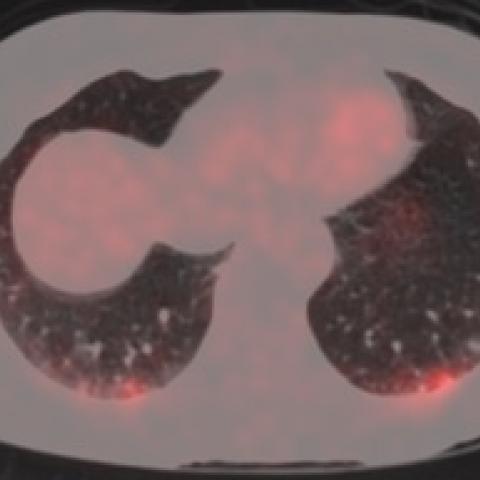 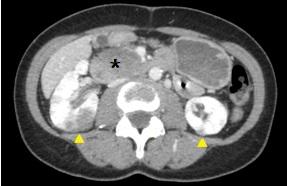 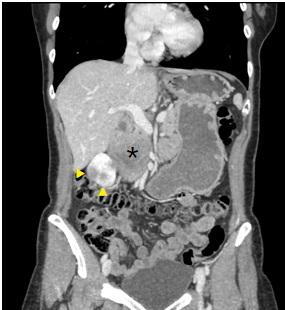 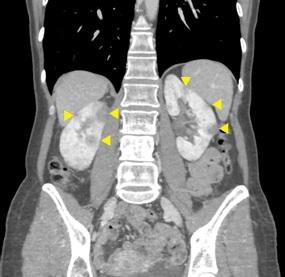 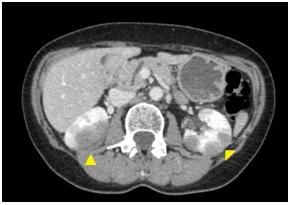 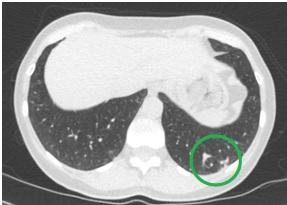 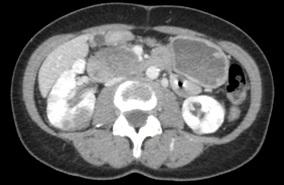 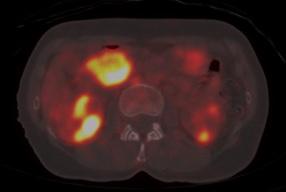 PET-CT FDG of the same area in 2a. The hypermetabolic nature of both pancreatic and renal lesions can be seen. The pancreatic mass shows a maximum SUV of 9,9
Department of Nuclear Medicine, Cruces University Hospital, University of the Basque Country, Spain, 2021

CT (a) and PET-CT (b) comparison of pulmonary involvement 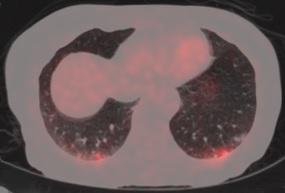