Parents of a 2-year-old female presented to pediatric OPD when they noticed progressive swelling of patient’s head since 1month. They also noticed visual disturbance, difficulty in walking since 20 days, fever and episodes of vomiting in last 2 days. No history of trauma/ seizures/ loss of consciousness.

Anteriorly, there was displacement of left cerebellar hemisphere and mass effect on brain stem with displacement of basal cisterns and ascending transtentorial herniation. It was causing upstream dilatation of third and bilateral lateral ventricles with periventricular CSF seepage - obstructive hydrocephalus.

There was no evidence of infiltration into brain parenchyma (Figure 3).

It was displacing left transverse sinus and straight sinus.

Medially, the lesion was crossing midline and causing displacement of right cerebellar hemisphere.

Ewing sarcoma (ES) is a malignant small, round cell tumour arising from bone and soft tissue in children and young adults. It can occur at osseous and extra osseous sites [1].

There is male predilection in the ratio of 1.8 : 1. Approximately 90% of cases occur in the first two decades of life, peak incidence being between 5 and 13 years [2].

The mesenchymal stem cell is proposed as the cell of origin, but there could be other cell types that may give rise to this tumour based on its ability to occur at multiple sites [3]. Its usual locations are diaphysis of long bones followed by pelvis, ribs, vertebrae, and rarely skull (1).

Ewing’s sarcoma typically grows extradurally; usually, large mass is seen before dural invasion or clinical detection or both. The duration of symptoms ranges from 2 weeks to 2 years. Symptoms develop as a result of dural invasion or raised intracranial pressure. Headache and scalp swelling are the most common symptoms, papilloedema is the most common sign. However, these rarely present with hydrocephalus [2].

Histologically, characteristic feature include sheets of small round blue cells with an increased nucleus-to-cytoplasm ratio. Pseudorosettes may be present. Mitoses are common. Bony spicules may be present, and CD99 and vimentin may be expressed [2].

The CT scan usually shows an isodense mass that may extend intra- or extracranially. The enhancement is usually strong and heterogeneous. There may be bony destruction and/or new bone formation, with a spiculated pattern distinctive of Ewing’s sarcoma. The MRI imaging shows heterogeneous signal intensity, along with scattered areas of haemorrhage and necrosis [2].

Surgery remains the best treatment modality. Adjuvant therapy after resection including radiotherapy and chemotherapy is essential [2,7].

Cranial Ewing’s sarcoma rarely shows early metastasis and has a better but still severe prognosis compared to many counterparts [8]. 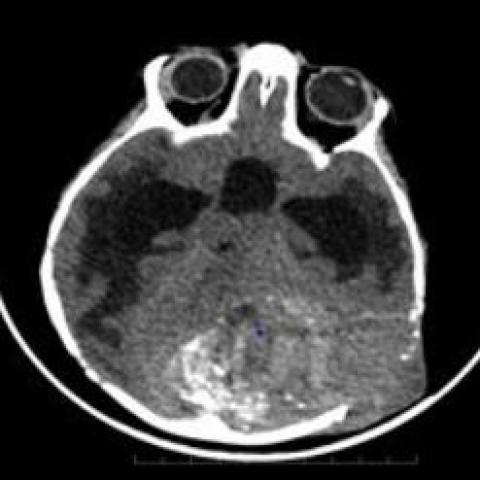 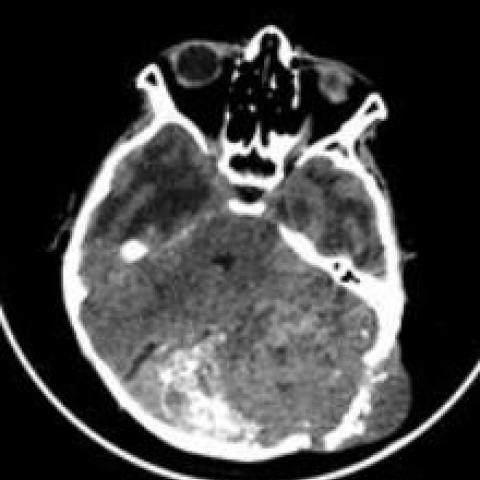 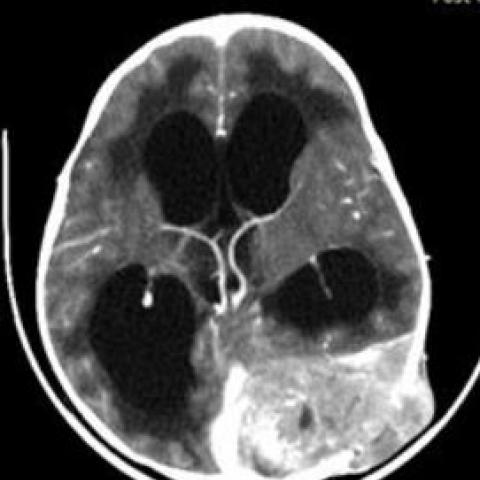 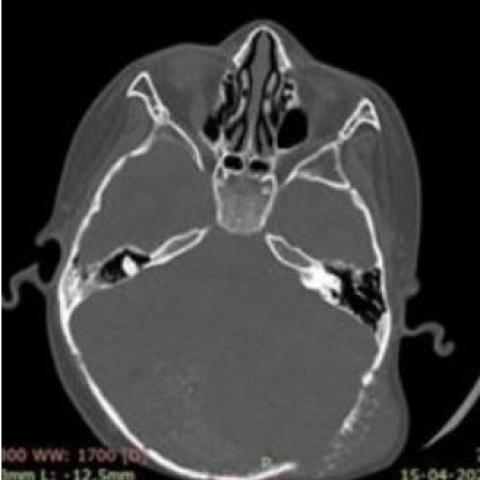 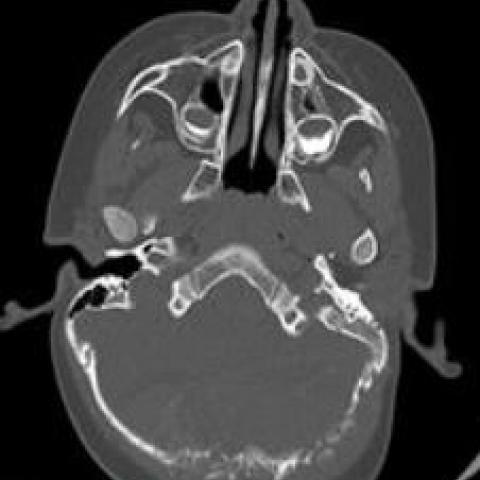 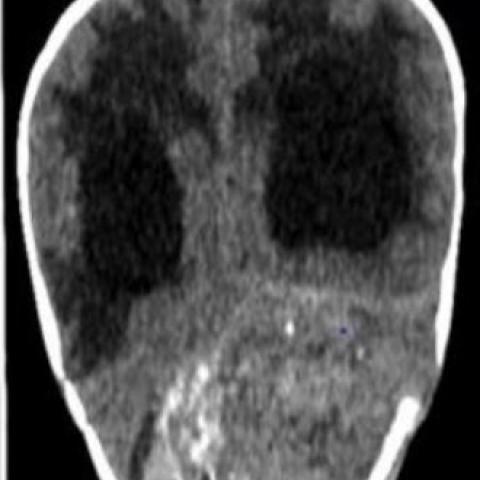 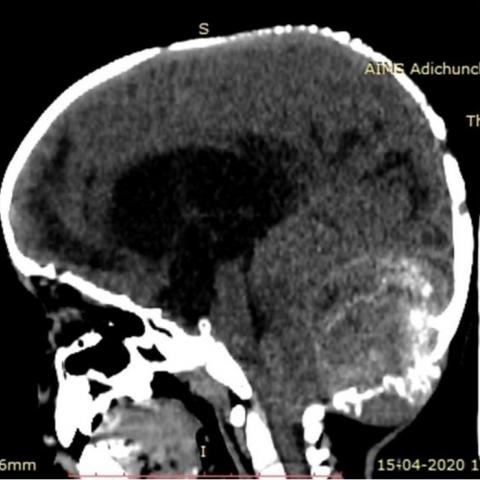 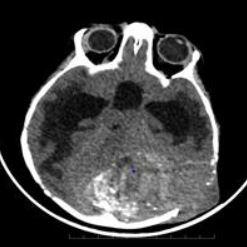 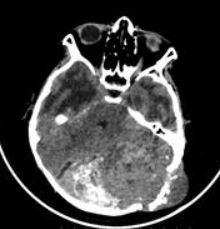 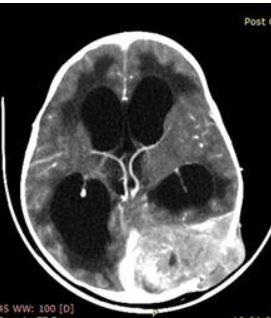 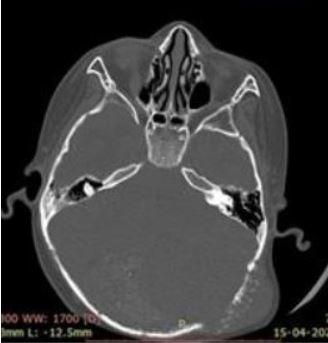 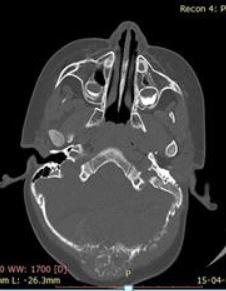 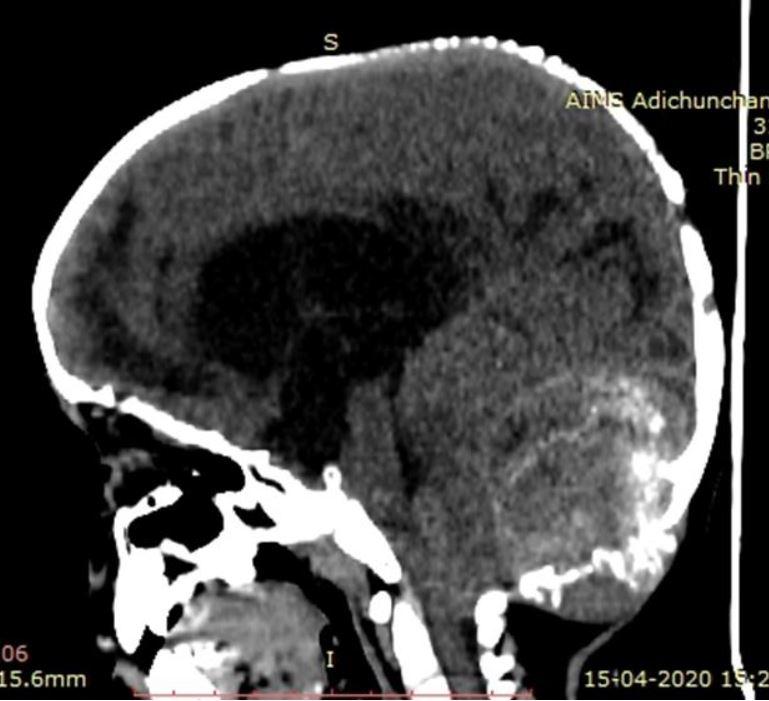