A 75-year-old patient presented with a 3-week course of progressive dyspnea. Chest X-ray and chest CT were performed.

Initial Chest X-ray (figure 1) showed a nearly complete white-out of the right hemithorax with contralateral mediastinal shift, so subsequent chest CT was performed (figure 2). A large heterogeneous soft-tissue intrathoracic mass was seen, probably arising from the pleural surface and also invading the prevascular mediastinum. No macroscopic fat could be appreciated in the described lesion. Secondary right lung collapse and left mediastinal shift could also be noted. There was an associated moderate amount of right pleural effusion.

One year later, a new CT scan denoted the presence of a new right basal pleuromediastinal mass (figure 3), along with an infradiafragmatic mass in the falciform ligament (figure 4). This second mass was extending into the anterior segments of the right hepatic lobe, and some calcifications could be appreciated inside.

After the initial CT, upper right lobectomy was performed resecting the mass (figure 5). The anatomopathological result showed a grade 2 dedifferentiated pleuromediastinal liposarcoma. After two new episodes of dyspnea and respiratory failure, the radiological images showed new intrathoracic and intrabdominal masses. The histology showed a grade 3 dedifferentiated liposarcoma. These findings suggested metastatic recurrence of her disease and the patient died a few days later.

Liposarcoma commonly arises from the retroperitoneum and the extremities, although it can also affect other anatomic locations. However, primary intrathoracic liposarcoma is extremely uncommon [1,2]. In general, sarcomatous lesions in the thorax are most commonly due to metastases from extrathoracic musculoskeletal tumours [3].

Dedifferentiated liposarcoma has a well-differentiated component and a non-adipose cellular sarcoma component. Affects men and women in similar proportions, with a peak prevalence in the 7th decade [1]. These neoplasms typically have an expansile slow-growing and silent behaviour, until they produce symptoms due to mass effect presenting as large or even massive tumours [1,2].

Overall, imaging features of thoracic primary sarcomas are very limited in the literature and they are often based on other more prevalent locations [3]. They tend to be large masses with well-defined contours and heterogeneous density on CT. It is often difficult or either impossible to determine if the tumour is arising from the chest wall, the pleura, the mediastinum or the lungs [2]. Pleural effusion is commonly associated but lymphadenopathies are exceptional [3]. Dedifferentiated liposarcomas share radiological features with well-differentiated liposarcomas, presenting as soft-tissue masses with fat components and nodular nonlipomatous components with thick septa [1]. They occasionally show calcification or metaplastic parts [1]. However, dedifferentiation is based on the non-fatty component, which can be quite large and occasionally dominant, not being able to differentiate fat density on CT on poorly differentiated subtypes [1,2]. These nonadipose foci demonstrate similar attenuation or slightly lower than that of skeletal muscle on CT [1].

The treatment approach of dedifferentiated liposarcomas consists of wide surgical excision, usually with adjuvant radiation therapy. Despite the treatment, these kinds of tumours have a high tendency to local recurrence and metastases are seen in 15-20% of cases, predominantly affecting the lungs, liver and bone [1].

In conclusion, the diagnosis of intrathoracic liposarcoma may be difficult when only based on radiological features, particularly if macroscopic fat is absent. Further research needs to be done to better characterize this kind of neoplasms in this unusual location. 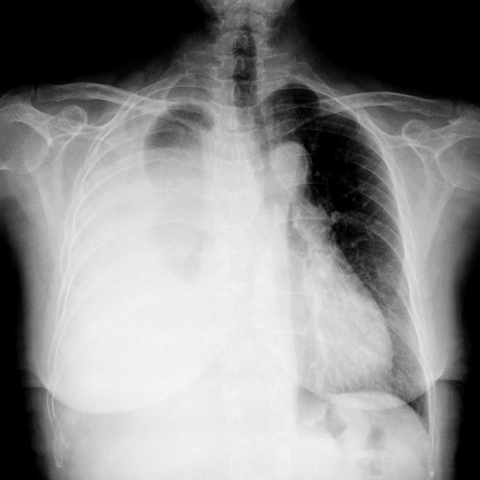 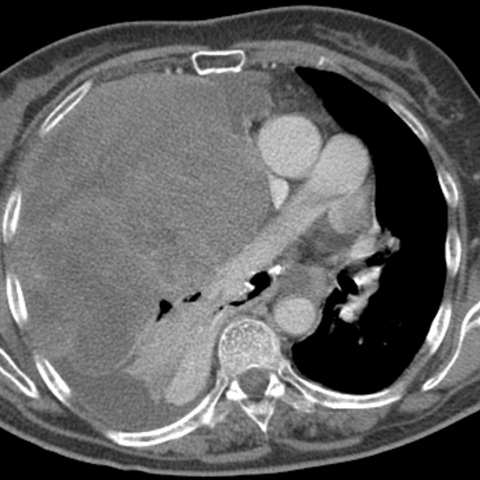 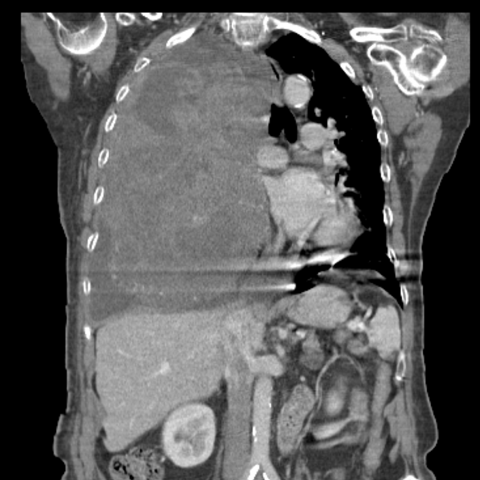 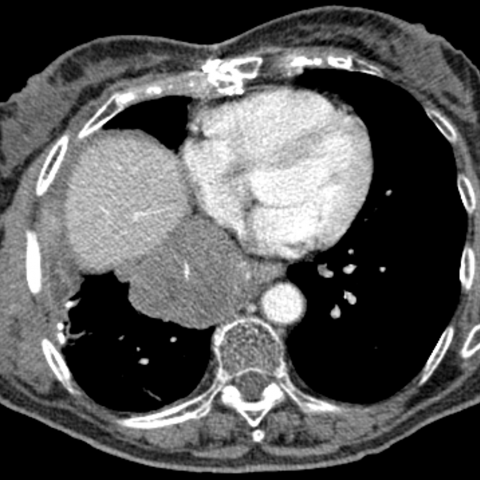 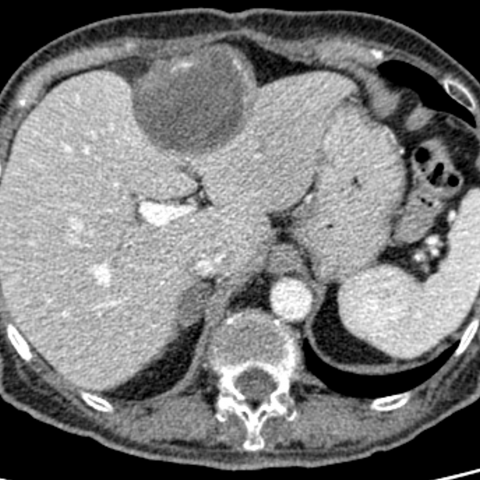 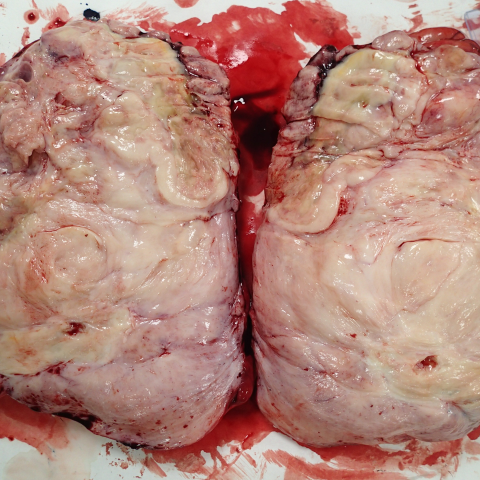 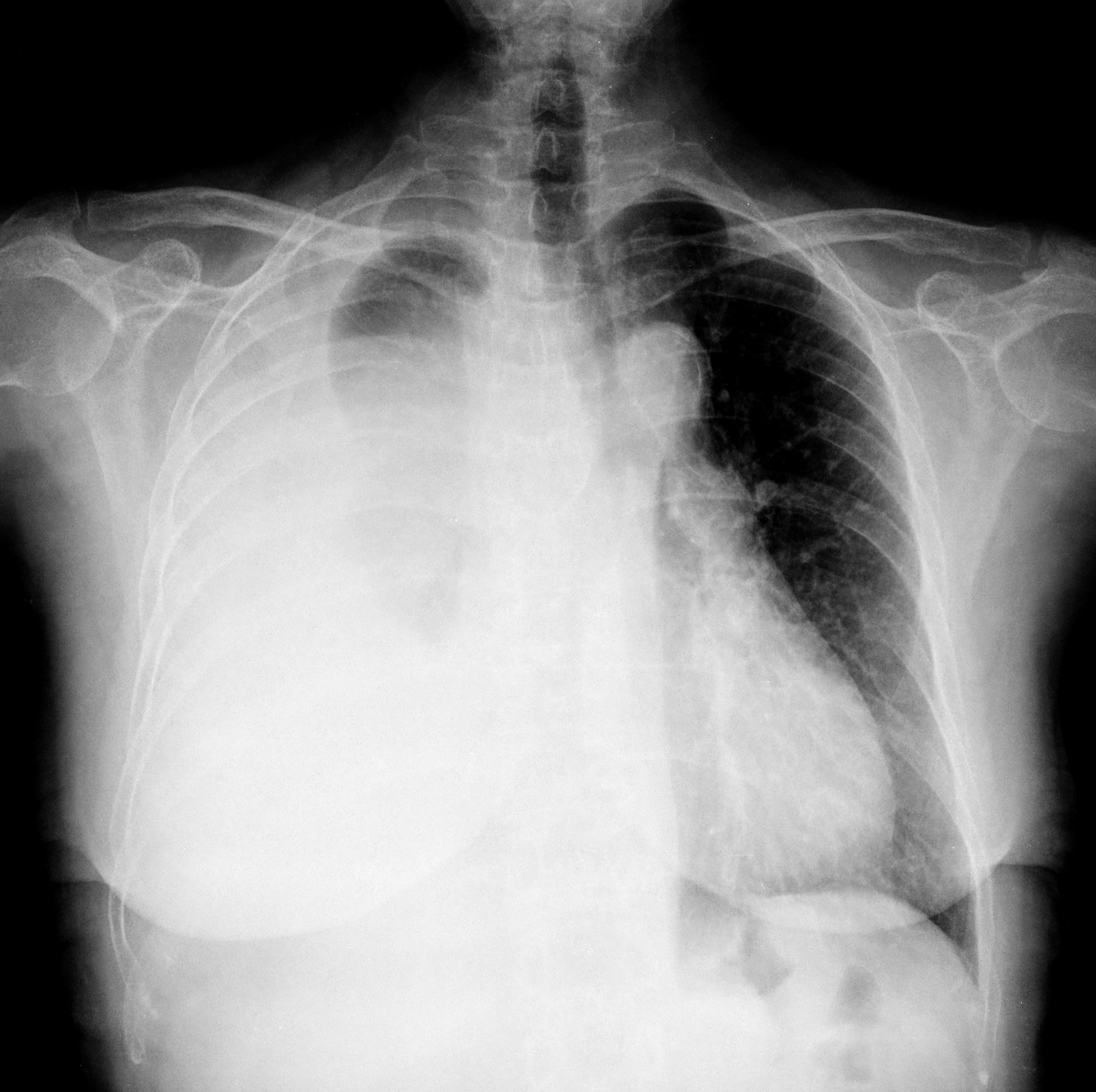 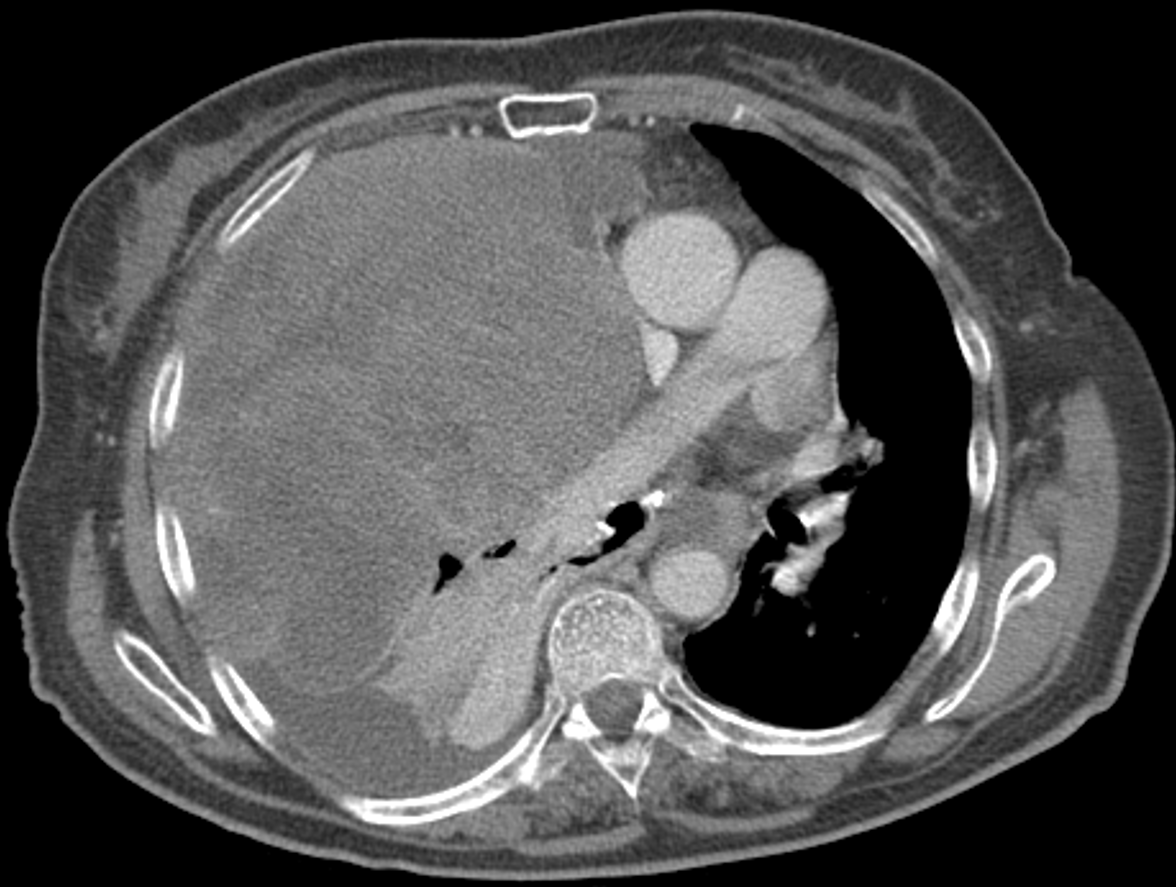 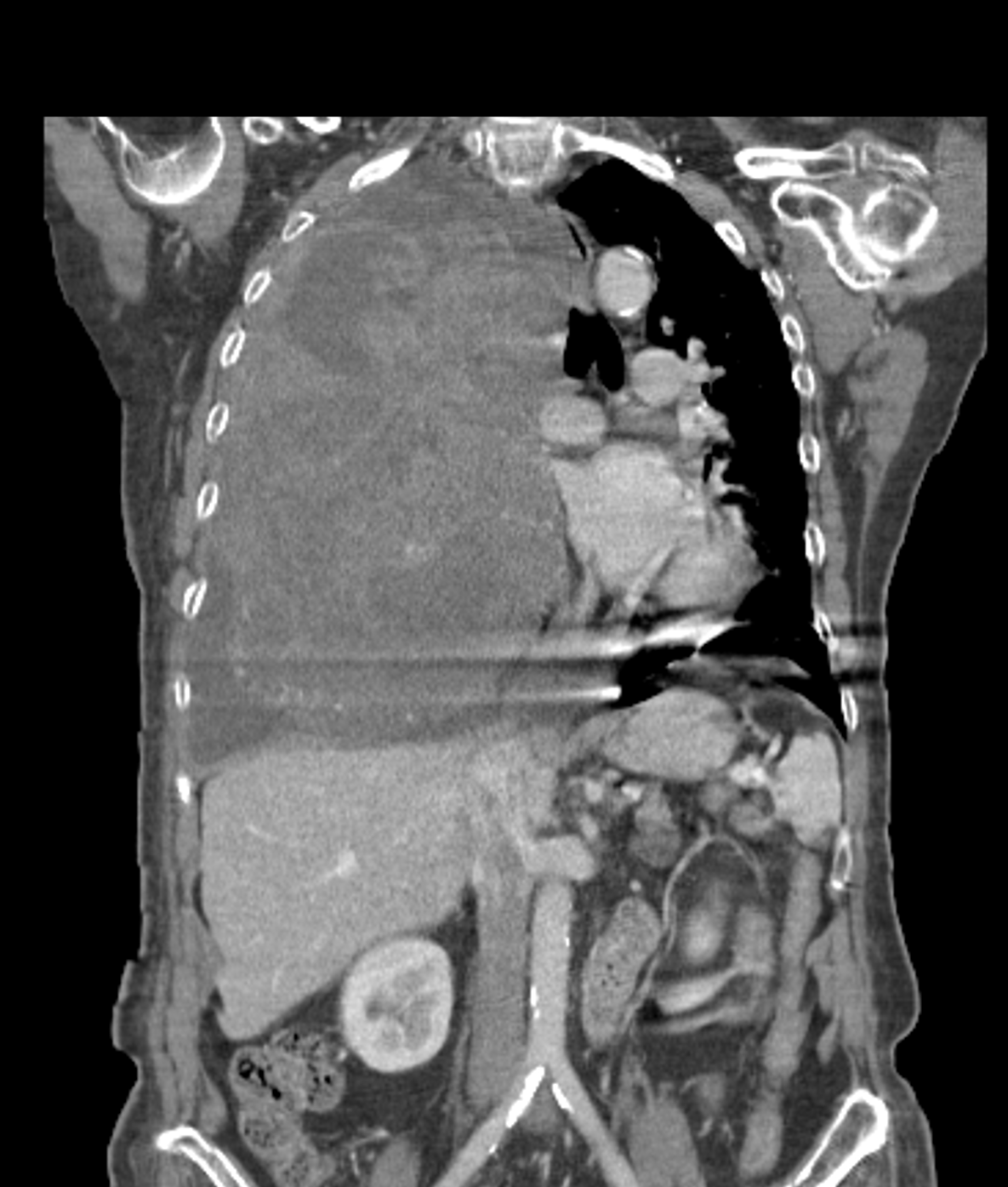 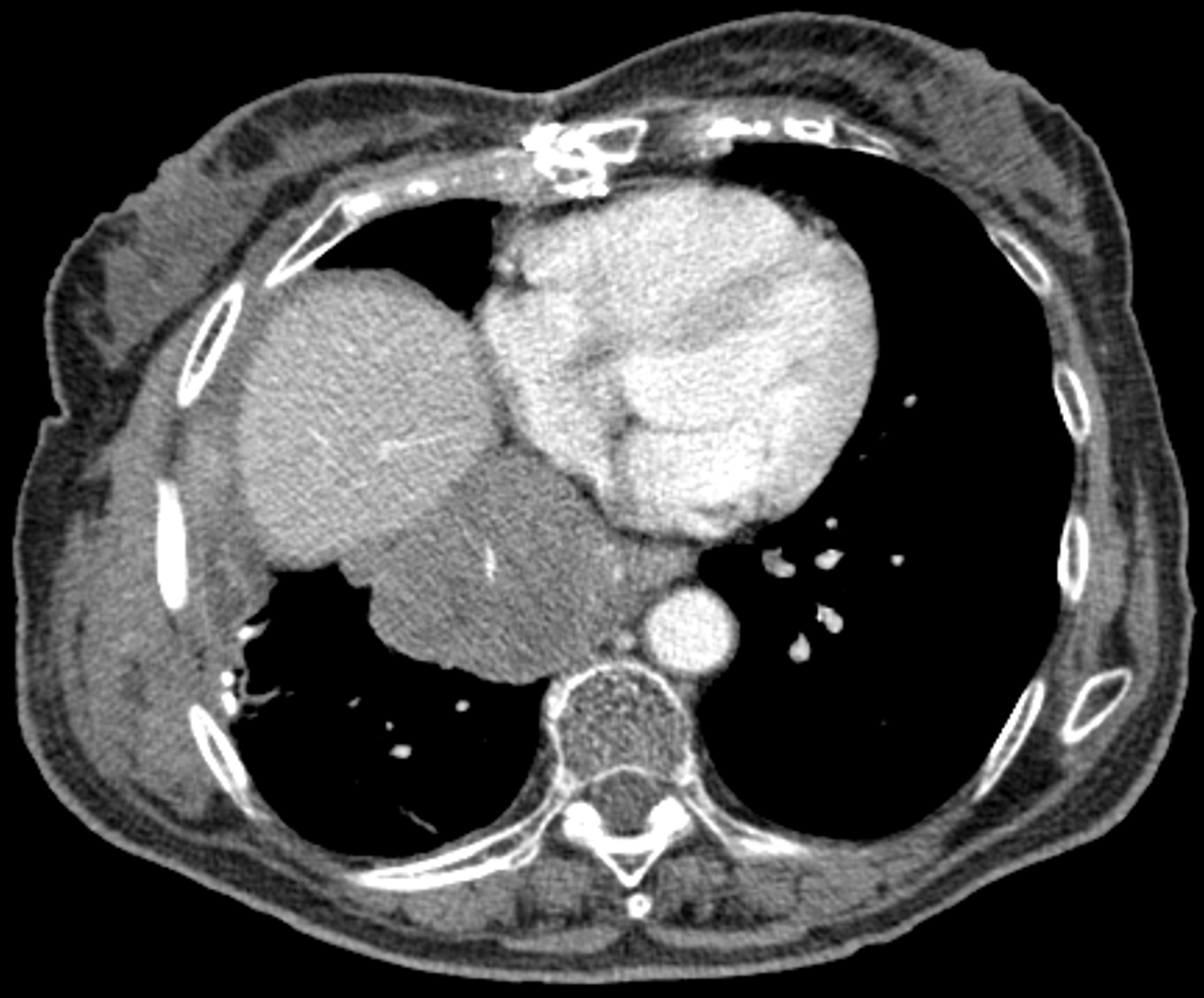 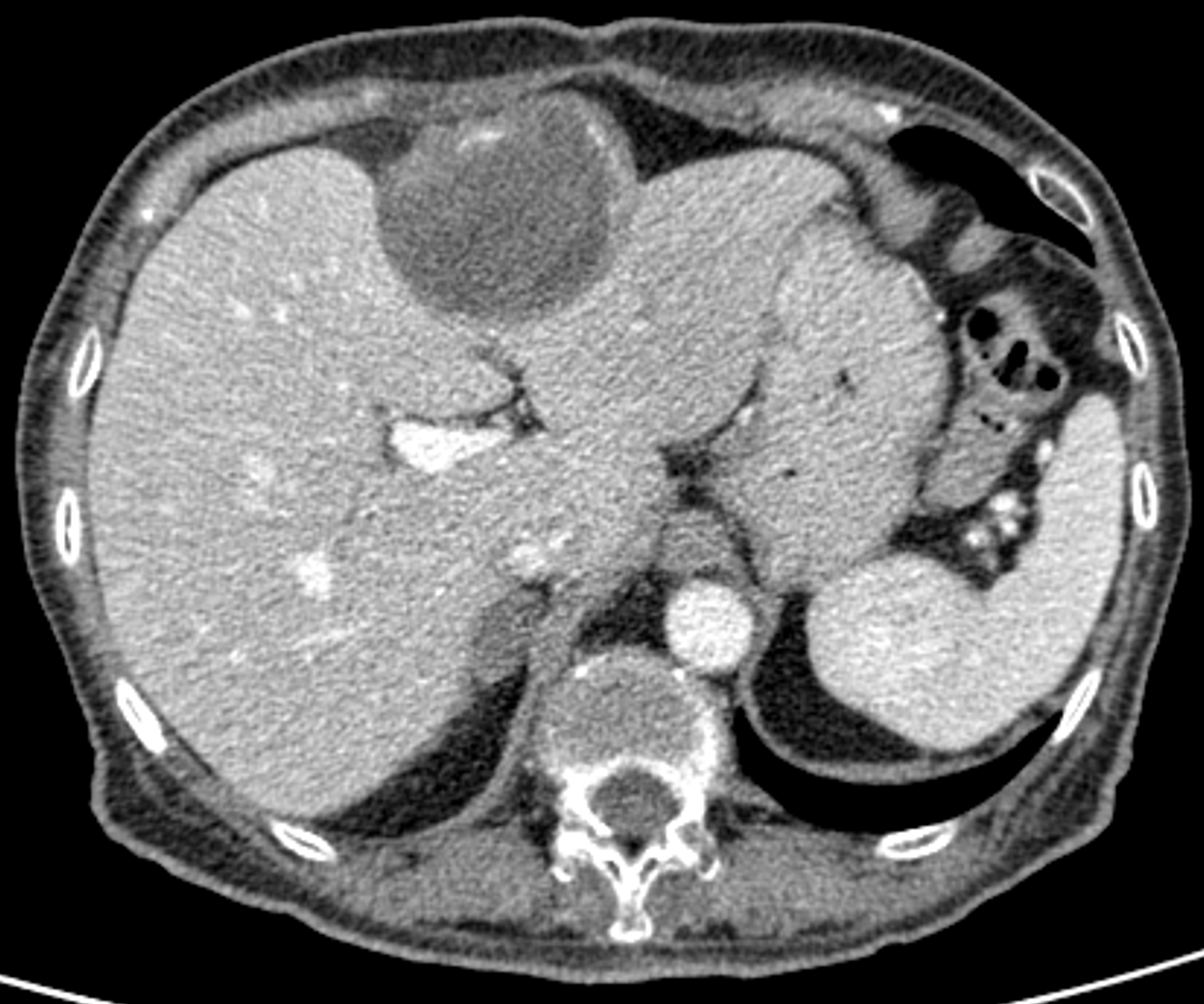 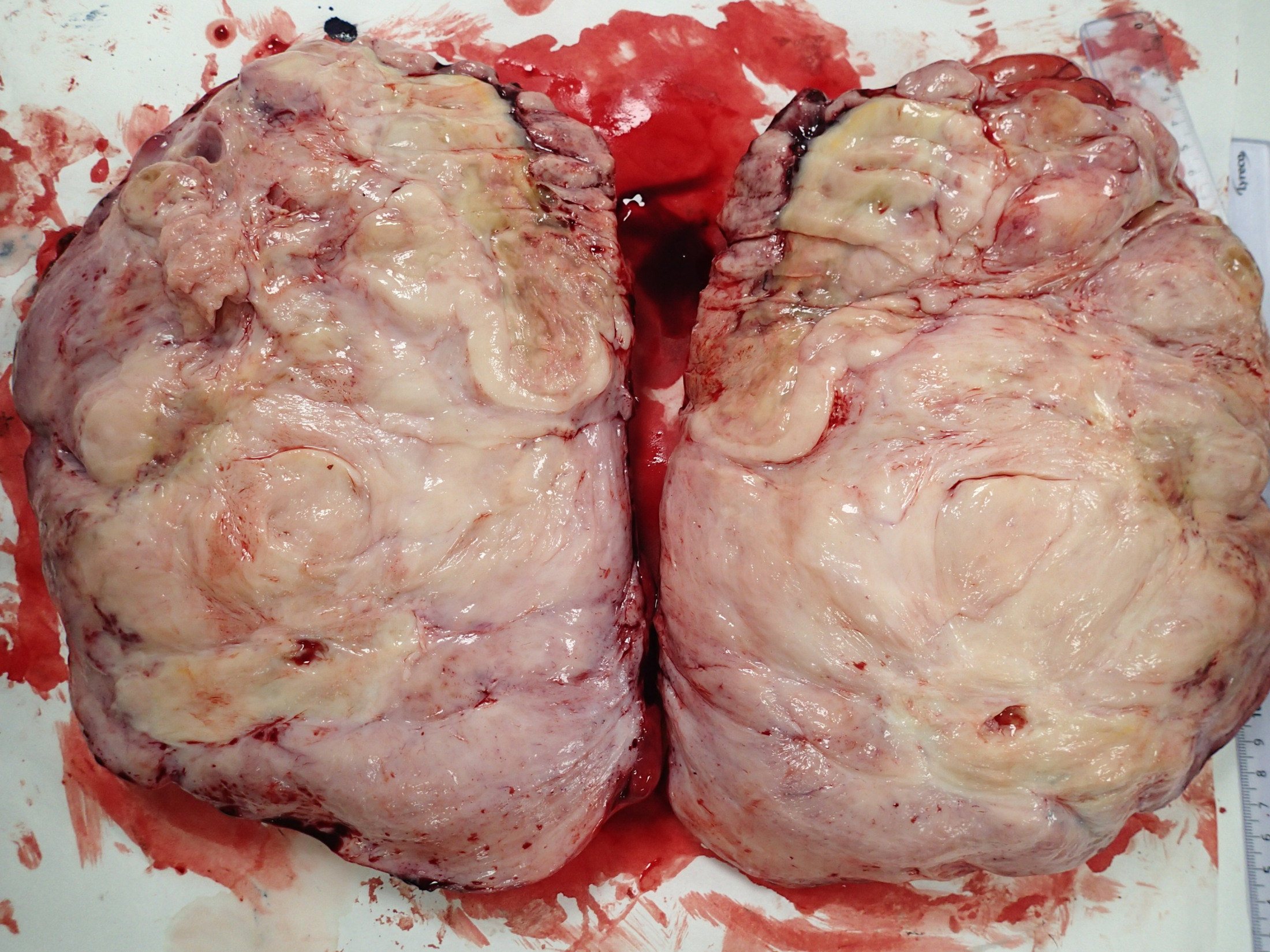