A 6-month-old infant with personal background of preterm twin birth and DiGeorge syndrome diagnosis was referred to our centre for progressive hydrocephalus with intracranial hypertension.

After ventriculoperitoneal shunt surgery, the patient underwent a cerebral and spinal MRI.

Background. Rhabdoid tumours (RT) are rare and extremely aggressive tumours of early childhood that can be divided into renal and extrarenal (intracranial or soft-tissue) types according to their site of origin. The extrarenal type that arises in the CNS is also called atypical teratoid/rhabdoid tumor (AT/RT) and it is the most frequent subtype among the extrarenal localizations [1].

Irrespective of the site of origin, molecular genetic analyses of the RT show deletions in the long arm of chromosome 22 (22q11) and mutations of the SMARCB1/INI1 gene, as in our case, in which the infant had been diagnosed with DiGeorge syndrome [2, 3, 4].

While the malignant RT of the kidney is the most common type and the most associated (10-30%) with a concomitant tumour in the CNS, the soft-tissue extrarenal type of RT is an exceedingly rare and highly malignant tumour. For this reason, there is scarce literature and the existing literature mainly includes case reports [3].

Clinical perspective. In older infants and children, RT occur more often within the kidney or CNS as compared with the fetus and neonate where the soft-tissue RT predominate, being the median age of presentation 11 months [2, 5]. Extrarenal non-CNS RT typically presents as a mass lesion in the head or neck region, as skin tumor nodules resembling the “blueberry muffin baby” of neonatal leukemia or neuroblastoma, or disseminated malignancy. Its clinical manifestation varies depending on the site of origin.

Imaging perspective. On all modalities, the extrarenal RT appears as a large and heterogeneous mass, which may have a cystic central component due to the necrosis. In conventional MR this tumour manifest as hypo- to isointense to muscle on T1-weighted images and heterogeneously hyperintense to muscle on T2-weighted images. Solid areas show diffusion restriction at DWI, enhancement after the administration of paramagnetic contrast, and avid heterogeneous enhancement at DCE MRI (type III or IV curve profile) [1].

Outcome. Due to its rapid growth, there are frequent signs of compression of the adjacent structures, early metastases, and disseminated disease at diagnosis [1, 2]. This entails a poor prognosis, absence of curative or onco-directed treatment, and high mortality. Most of the treatments are aimed to improving the quality of life and focused on the comfort of the patient. Nevertheless, an aggressive surgical approach is recommended, including second-look surgery whenever possible to achieve total resection. 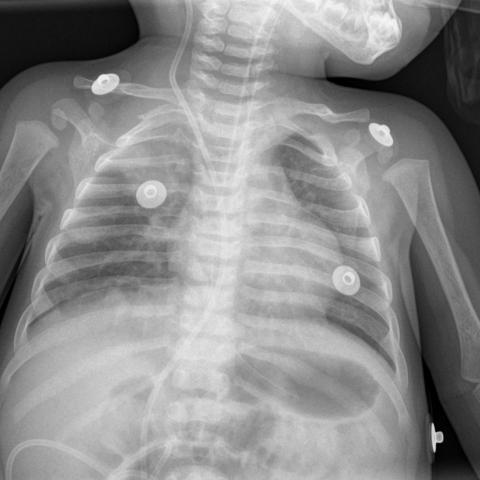 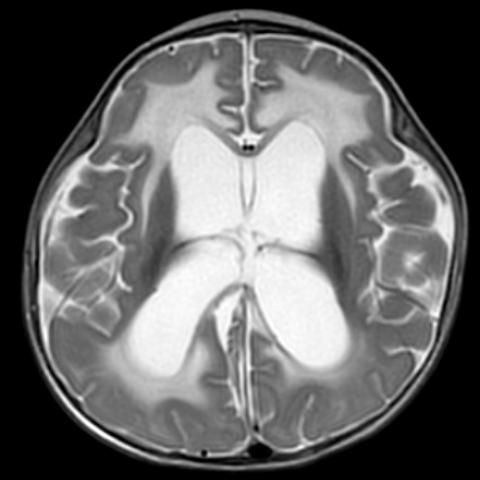 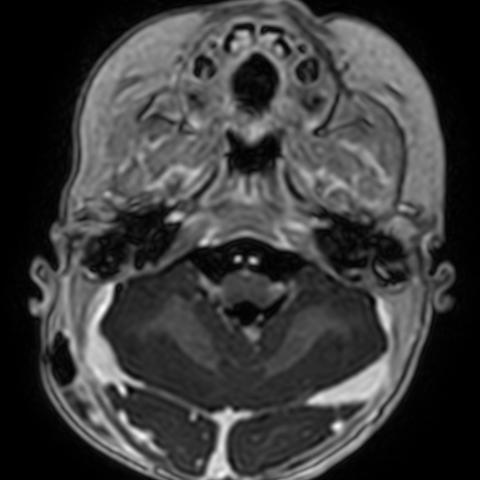 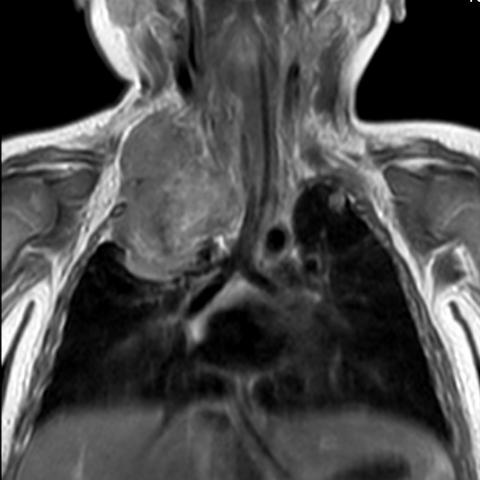 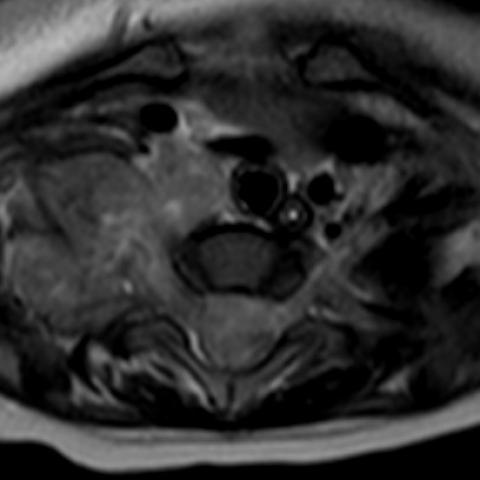 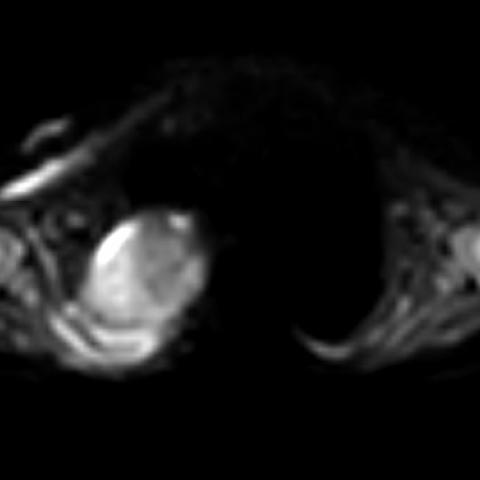 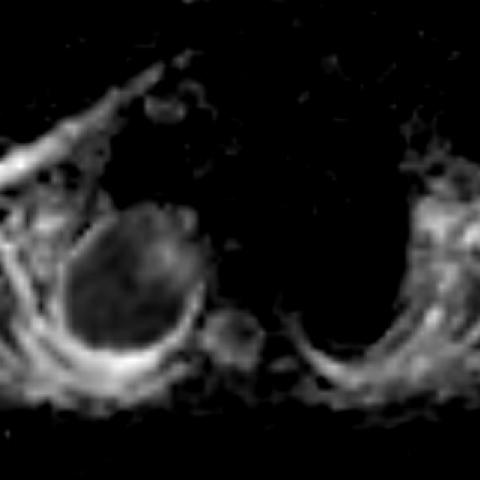 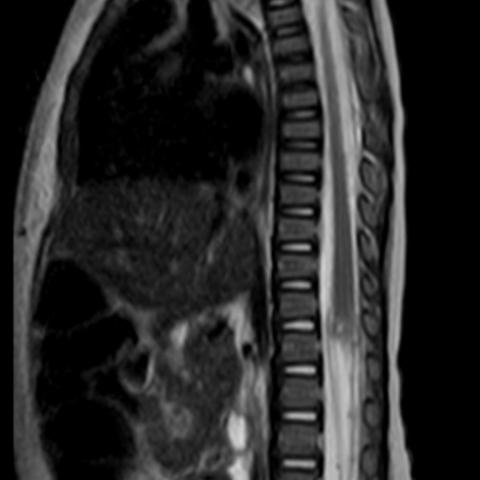 Spinal MRI sagittal T2. Intraspinal component of the lesion from C5-D1 with alteration in the signal intensity of the cord in relation to compression and diffuse leptomeningeal nodular enhancement and a leptomeningeal nodule at the level of the medullary cone compatible with leptomeningeal spread of the disease
Figure 8 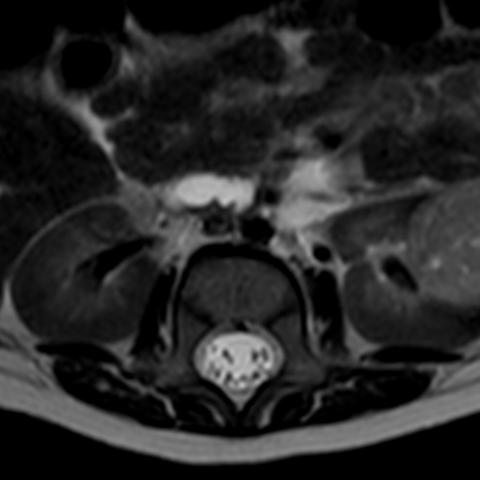 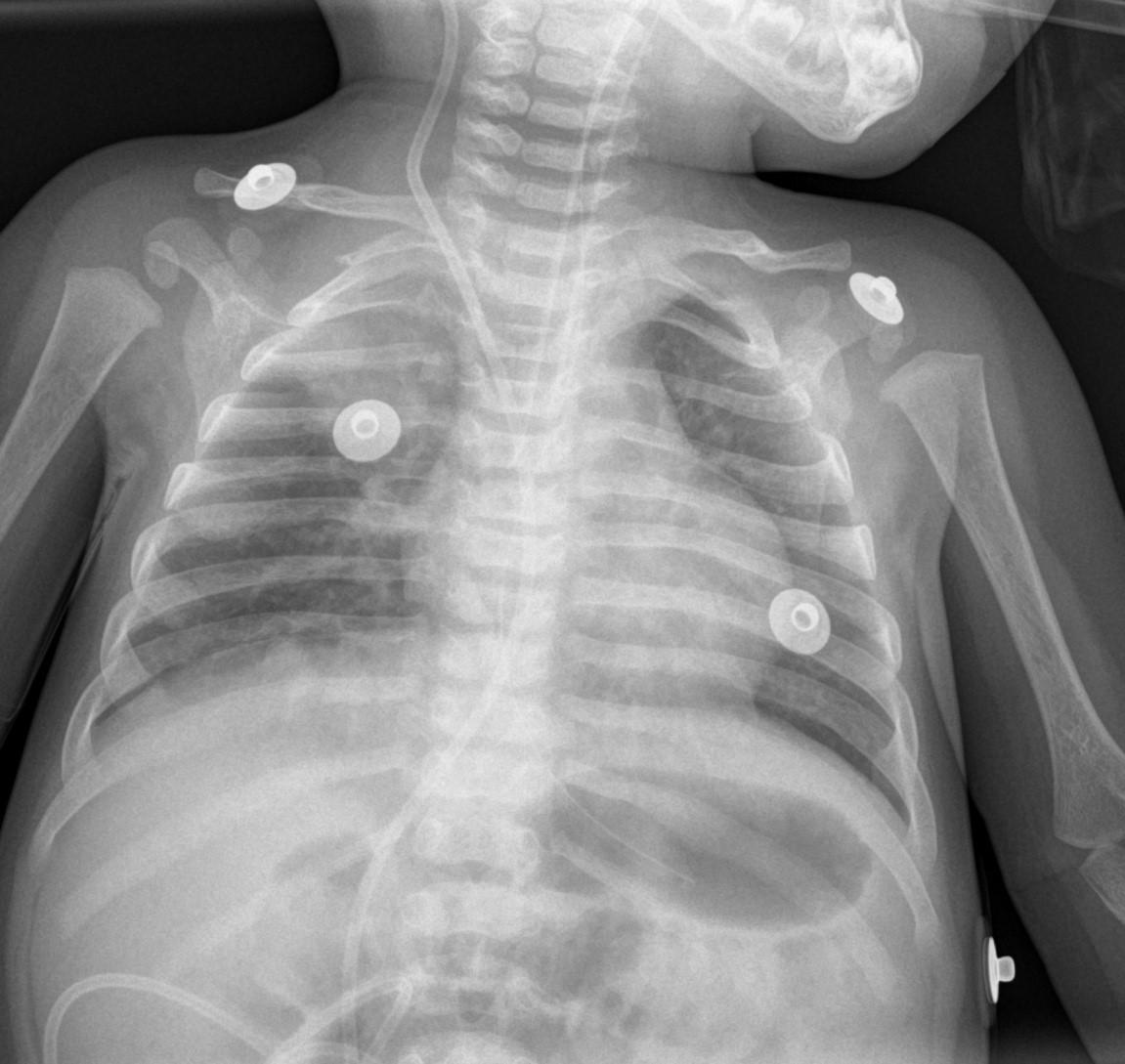 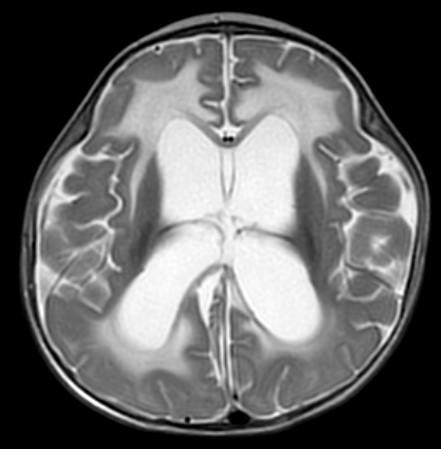 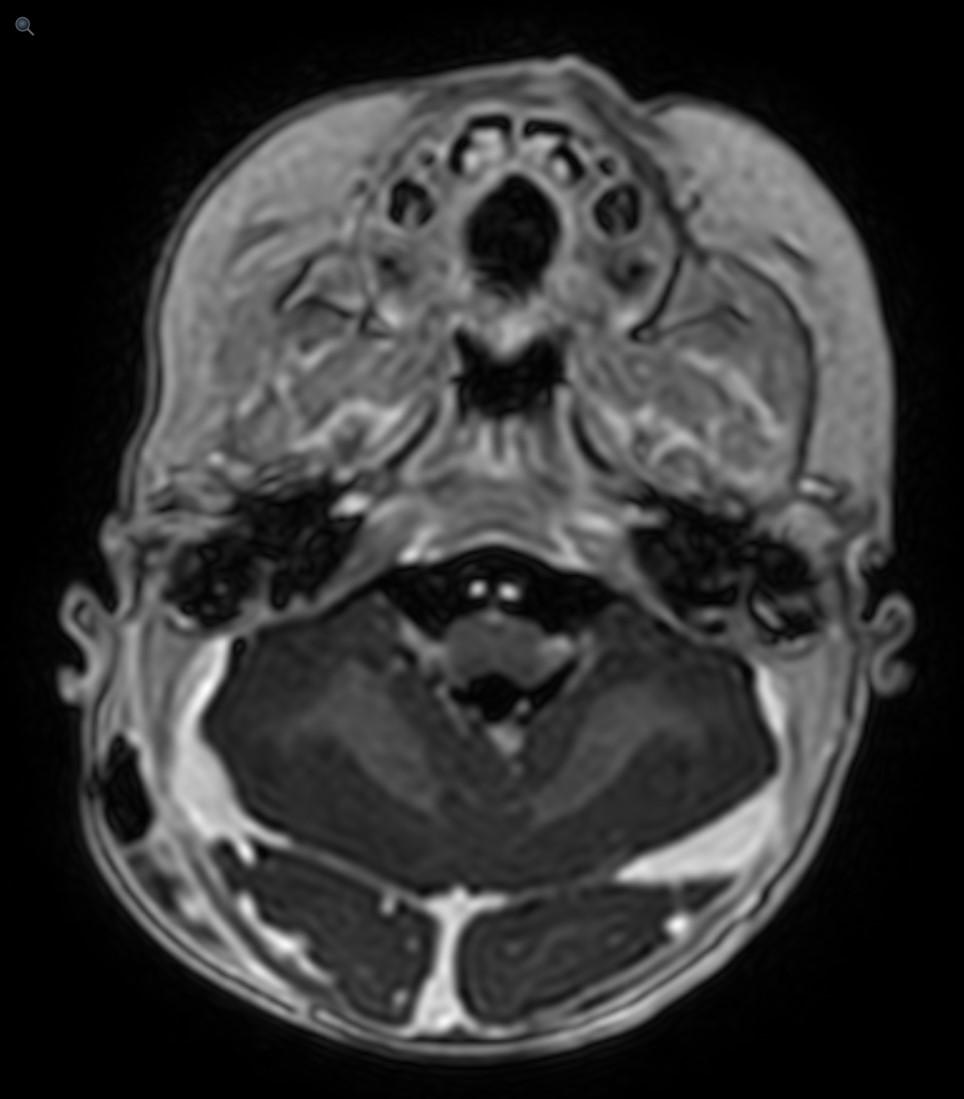 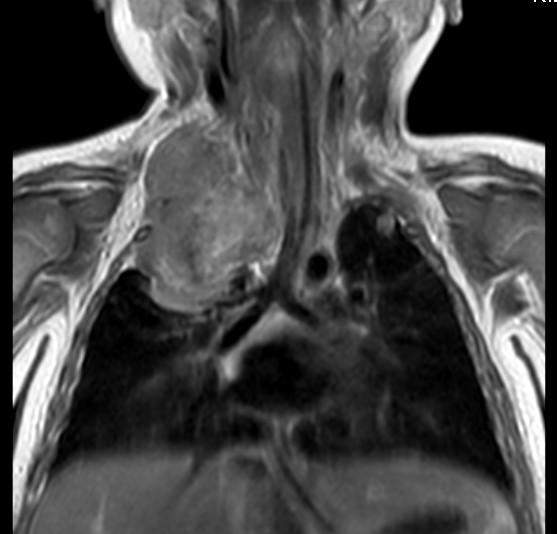 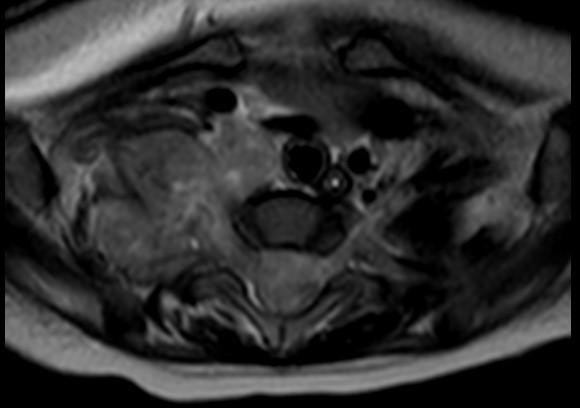 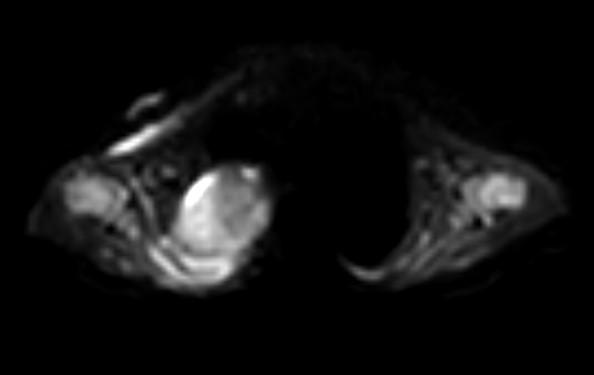 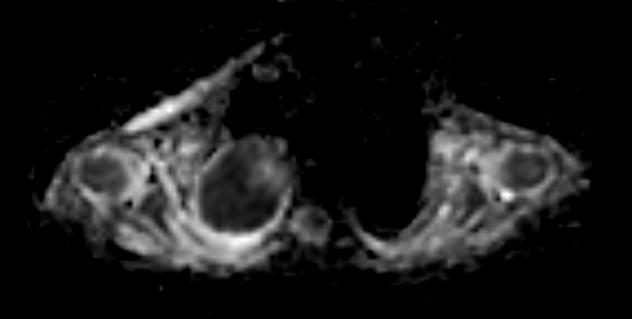 Spinal MRI sagittal T2. Intraspinal component of the lesion from C5-D1 with alteration in the signal intensity of the cord in relation to compression and diffuse leptomeningeal nodular enhancement and a leptomeningeal nodule at the level of the medullary cone compatible with leptomeningeal spread of the disease
Department of Radiology, Hospital San Joan de Déu, Barcelona, Spain, 2021 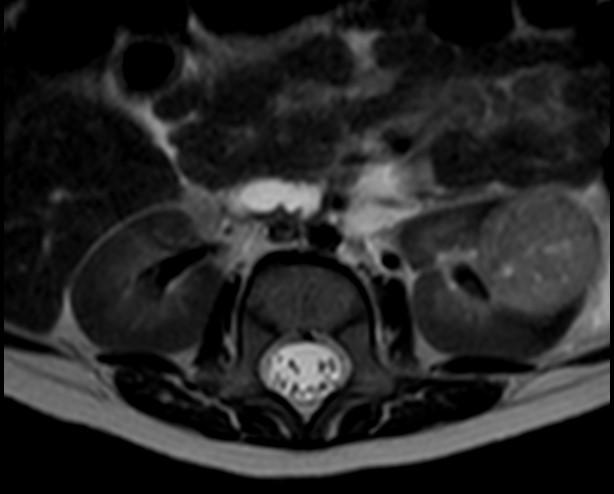