Complete agenesis of the dorsal pancreas

The clinical presentation can range from complete absence of symptoms to non specific abdominal pain, diabetes mellitus, pancreatitis and sometimes exocrine insufficiency. The most common clinical presentation is epigastric pain and has been assumed to be due to pancreatitis, sphincter of Oddi dysfunction or autonomic neuropathy. The reported associated anomalies include polysplenia, replaced hepatic artery and bicornuate uterus [3].

The ultrasound examination has limited role due to pancreatic bed obscured by the air in small intestine and stomach. The CT and Magnetic Resonance Imaging are useful modalities with the diagnosis of agenesis of the dorsal pancreas confirmed by demonstration of the absence of dorsal pancreatic duct either with Magnetic resonance cholangiopancreatography or endoscopic retrograde pancreatography. Imaging modalities(CT and MRI) show absent dorsal pancreas, with pancreatic bed anterior to splenic vein filled with stomach and bowel loops described as dependent stomach and dependent intestine sign respectively on CT. Discrete lobulation of head of pancreas have been described in these patients and classified into 3 types, according to their relation to the gastroduodenal artery or anterior superior pancreaticoduodenal artery [2,4].

To conclude the diagnosis of the dorsal agenesis of the pancreas is inconclusive without the demonstration of the dorsal duct and should be differentiated from pseudoagenesis  and distal pancreatic lipomatosis.

Ultrasound examination of the abdomen with the curvilinear probe placed in the epigastrium showed the normal head of pancreas (long red arrow) with absent neck, body and tail of pancreas
Figure 2 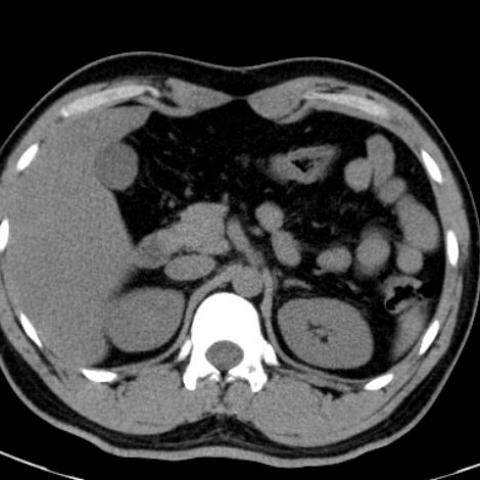 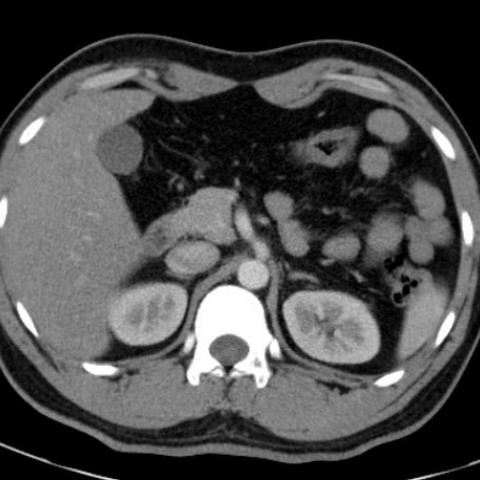 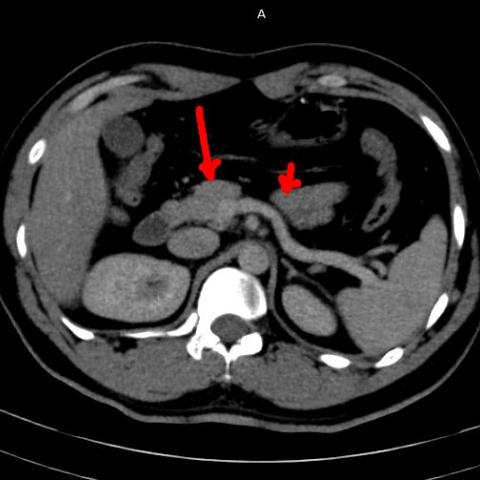 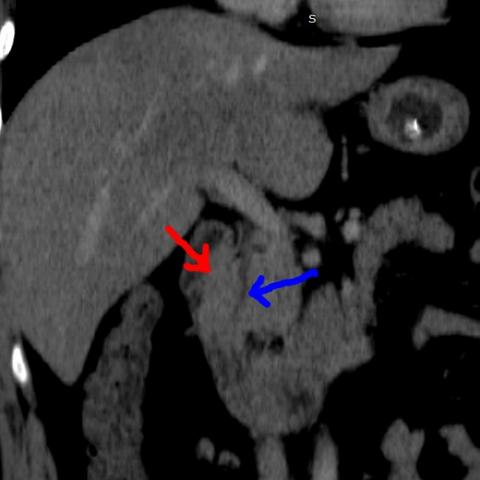 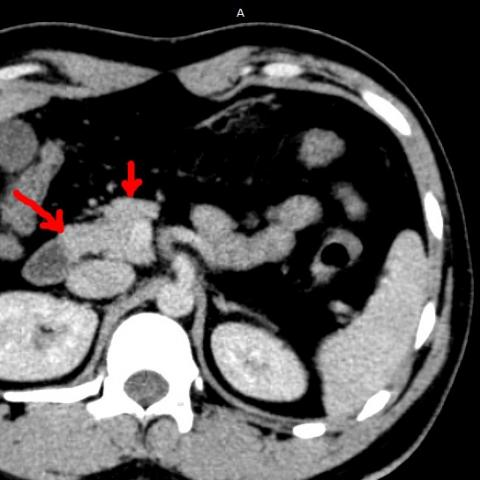 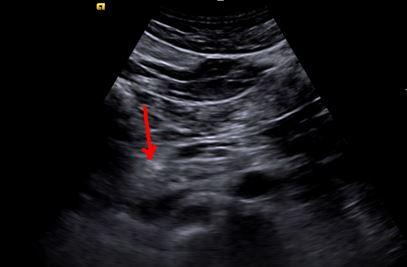 Ultrasound examination of the abdomen with the curvilinear probe placed in the epigastrium showed the normal head of pancreas (long red arrow) with absent neck, body and tail of pancreas
Department of Radiodiagnosis, Government Medical College, Kozhikode, Kerala, India, 2021 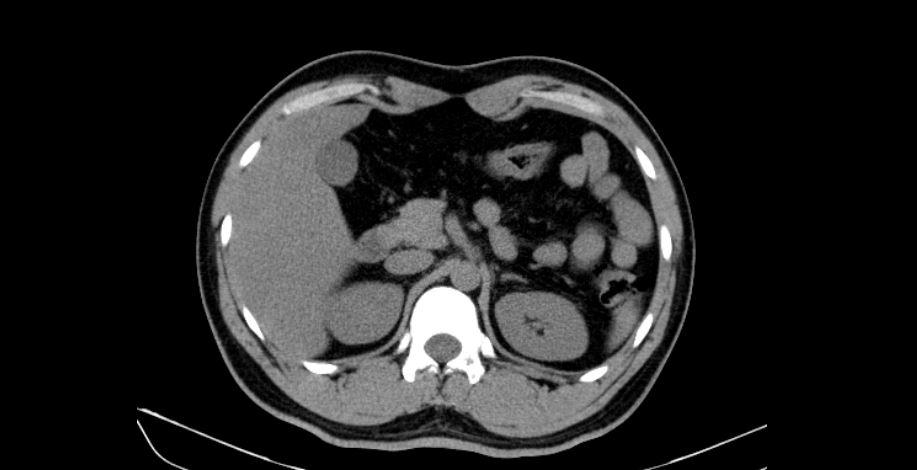 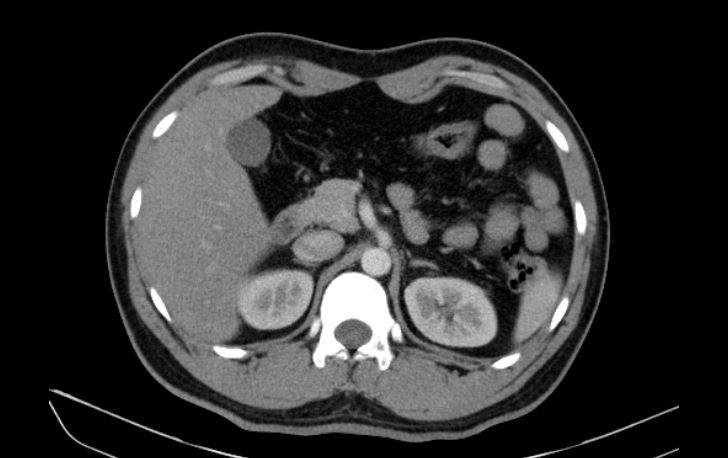 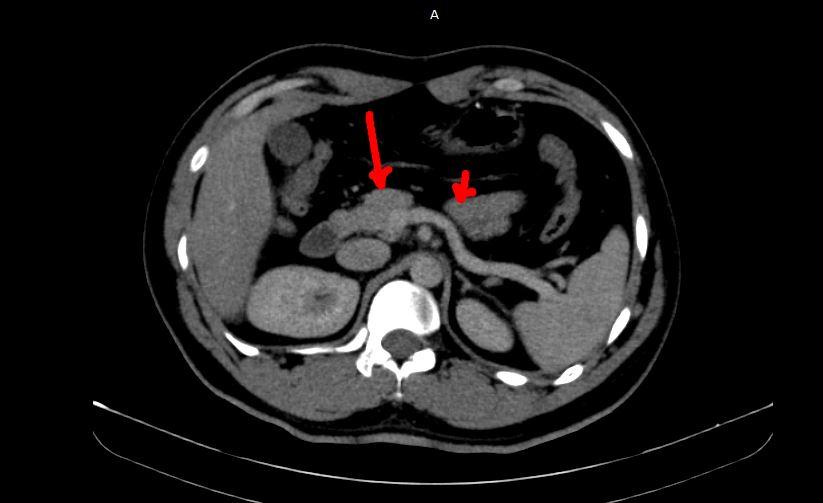 Curved axial multiplanar reformatted (curved MPR) images showing normal head and uncinate process of the pancreas, with completely absent neck, body and tail of the pancreas. The lobulated head of the pancreas, an anterior (short red arrow) and a posterior lobulation( long red arrow) with the superior pancreaticoduodenal artery in between the lobulations
Department of Radiodiagnosis, Government Medical College, Kozhikode, Kerala, India, 2021