Gossypiboma: A cause of entero-cutaneous fistula

A 46-year-old woman with a history of abdominal hysterectomy 6 months ago because of uterine leiomyomas. The patient complained of abdominal pain, fever and delay in wound healing with food leakage through the cutaneous surgical wound. Lab results showed leukocytosis and CRP elevation.

CECT showed a mainly low attenuation abdominal collection, with spongiform pattern (containing air bubbles) and the presence of metallic threads. The collection had a thick enhancing wall with peripheral fat stranding due to inflammatory changes. The collection appeared embedded within a distal jejunum loop. There is a fistulous tract that runs inferiorly from the collection through the anterior rectus muscle and the subcutaneous cellular tissue all the way to the surgical wound, with a small amount of oral contrast within this pathway. Findings are consistent with gossypiboma with a secondary enterocutaneous fistula.

Textiloma or gossypiboma refer to a mass of cotton matrix that is left behind in a body cavity during an operation. It occurs in one out of 1000-1.500 intra-abdominal surgical interventions [1]. There are several articles that show gossypiboma cases, but migration into the intestine causing an enterocutaneous fistula is very uncommon [2]. Risk factors include long and emergency procedures, unplanned change of operating room or staff, high BMI and female gender [3]. The incidence of this disease is usually underestimated because some patients remain asymptomatic or, mainly, because of medico-legal issues [2].

Foreign abdominal post-surgical bodies cause two types of organic responses, an aseptic fibrous response with a granuloma formation or an exudative response early in the postoperative period, secondary to bacterial contamination, which can evolve to several complications such as intestinal obstruction, perforation, peritonitis or rarely a fistula [1]. In developed societies, the sponges used have a radiological marker, but in poor resource countries, non-radio-opaque towels are used causing a radiologic image that can mimic patterns of hematoma, neoplasm, granulomatous process, cystic masses or abscess formation [2].

The imaging modality of choice is CT scan, contrast-enhanced if there are no contraindications. The typical findings include a low-density heterogeneous mass with a high-density wall that enhances and that has a spongiform or mottled pattern containing gas bubbles, in a patient with a history of surgical intervention in the anatomic area of interest [3]. When the sponge contains a radiopaque marker, the findings include thin metallic density in the mass and the diagnosis can easily be made on conventional radiography [1]. On ultrasonography a gossypiboma is usually presented as a cystic mass with well-defined walls and internal echogenic areas with posterior acoustic shadowing [3].

When a gossypiboma is diagnosed, even if the patient remains asymptomatic, surgical resection should be performed because complications may develop in the future. Most enterocutaneous fistulas are closed spontaneously when the textiloma is resected. Prevention of gossypiboma can be done by simple precaution like keeping a thorough pack count and tagging the packs with markers. It is recommended that the count be made twice: at the beginning and also before closing the wound [4, 5]. 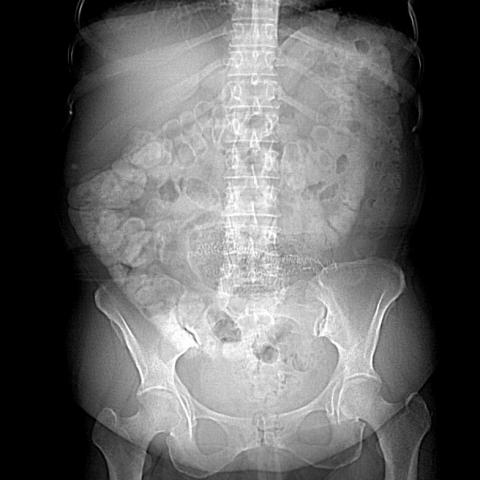 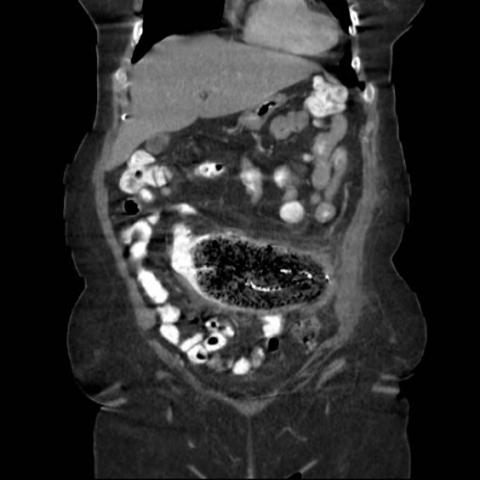 Coronal CECT reformatted image shows an abdominal collection with spongiform pattern with gas bubbles and the presence of metallic threads. There is peripheral fat stranding and the collection contacts widely with an adjacent jejunal loop
Figure 3 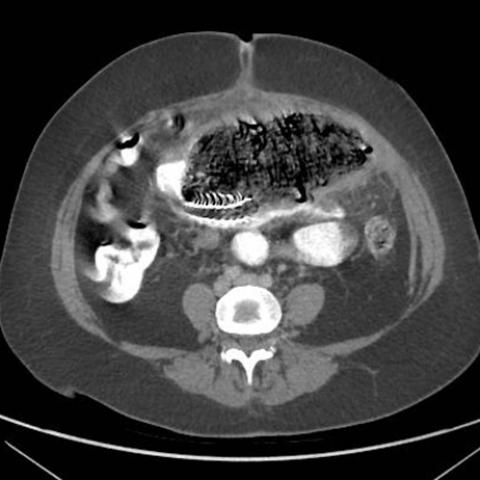 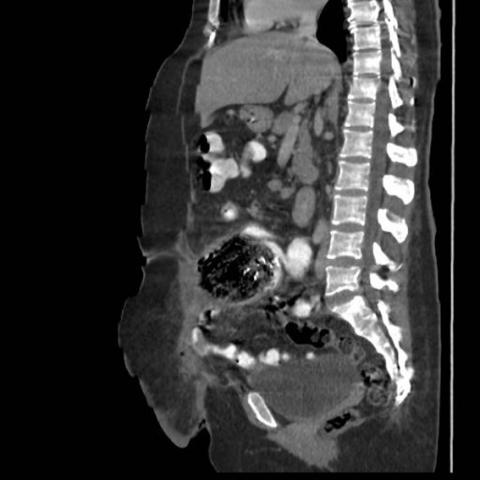 Sagittal CECT reformatted image shows a fistulous tract with air bubbles and oral contrast that runs inferiorly from the collection all the way to the surgical wound, consistent with an enterocutaneous fistula 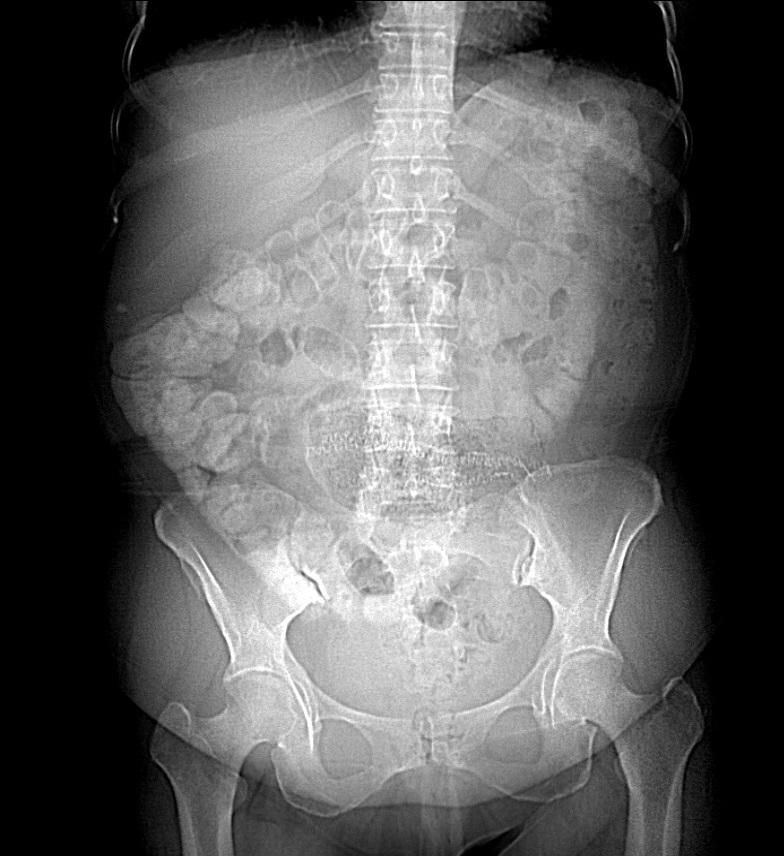 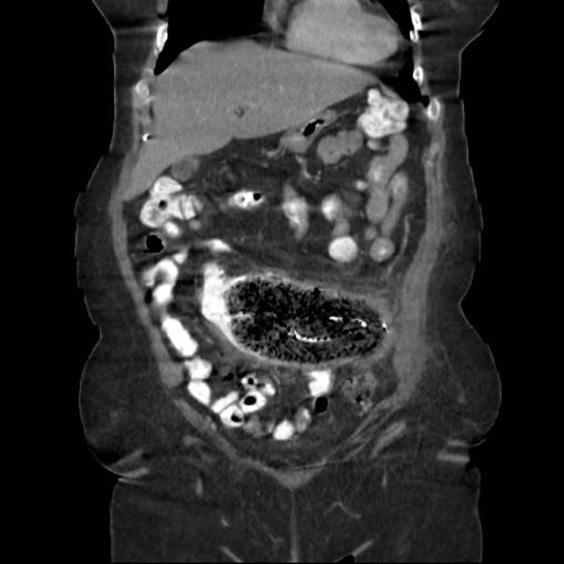 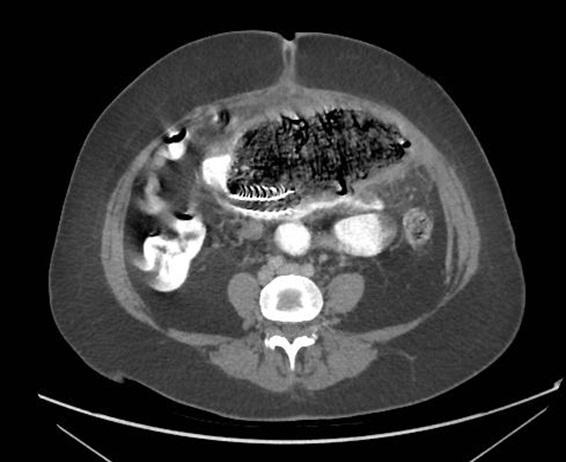 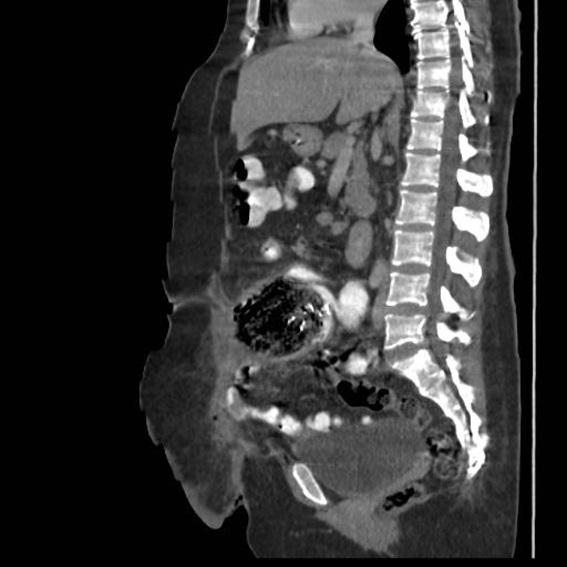 Sagittal CECT reformatted image shows a fistulous tract with air bubbles and oral contrast that runs inferiorly from the collection all the way to the surgical wound, consistent with an enterocutaneous fistula
Department of Radiology, Hospital Clínico San Carlos, Madrid, Spain, 2020