A 53-year-old Caucasian woman complained of right flank pain. Serum tests and urinalysis revealed no abnormalities. No relevant medical history was reported. She was referred for abdominal ultrasound.

The ultrasound examination showed a well-circumscribed nodule with a thin hyperechoic wall in parenchyma of the upper pole of the right kidney. No acoustic shadowing was seen. Colour-coded Doppler could not demonstrate intralesional vascularisation.

On plain CT (Fig 2) the centre of the nodule (1,9 x 1,8 x 1,3 cm) had a soft tissue density of approximately 42 HU. Tiny curvilinear calcifications were present in the contour of the lesion, intralesional fat could not be demonstrated. After administration intravenous contrast (Fig 3 and 4), the lesion was hypo-attenuating compared to the normal cortex, both in the corticomedullary (approx. 59 HU) and in the nephrographic phase (approx. 89 HU). The lesion was solitary, sharply demarcated and enhancement was homogenous. Other abnormalities could not be demonstrated in the abdomen. Renal cell carcinoma was suspected and robot-assisted nephron-sparing surgery was performed. Anatomopathological analysis of the surgical specimen revealed a metanephric adenoma.

Metanephric adenoma (MA) belongs to a novel group with a continuous histological spectrum of renal epithelial neoplasms. MA is a rare neoplasm that accounts for 0,2% of renal epithelial tumours. It occurs at all ages, most commonly in the fifth and sixth decades, with a 2:1 female predominance compared to males. MA is most often found solitary and unilateral. The reported average size upon diagnosis is 5,5 cm, ranging from 0,3 to 15 cm. Since its first description in 1979, metanephric adenoma was considered to be a purely benign entity, until one (and a second more controversial) case of metastasis has been reported more recently.

At least 50% of cases of metanephric adenoma are incidental findings. However, clinical manifestations can be seen, as in our patient. She complained of costovertebral angle and back pain, however other possible symptoms (fever, urinary tract infection, haematuria and a palpable mass) were absent. The lab results showed no polycythaemia, as is found in up to 12% of patients with MA, the renal lesion with the highest incidence of this abnormal blood result, compared to 1-6% with renal cell carcinoma (RCC).

The imaging features of MA are complex, can vary with every case and lack specificity. Therefore, MA is often misdiagnosed as RCC or renal cysts. Unfortunately, no typical and reliable radiological features of MA have been identified so far and diagnosis relies on pathology.

These lesions often present as hyperechoic on ultrasound and hyperdense masses on unenhanced CT, possibly correlating with pathologic findings such as psammomatous calcifications and nuclear-to cytoplasmatic ratio [1]. Other authors solely report iso- to hypo-echoic and iso- to hypodense lesions on plain CT, probably relating to cystic changes, necrosis or haemorrhage [2,3,4]. Furthermore, calcifications visible on imaging are present in approximately 20% of cases, but there has not been any literature on distribution of these calcifications. Although diffuse calcification in a MA is reported once [5], but to our knowledge, a solely calcified wall as in our case, is not yet reported. Enhanced CT shows almost always a well-circumscribed lesion with lower enhancement compared to normal renal parenchyma in all contrast phases, illustrating the hypovascularity of MA [4,6]. MRI imaging of MA is rarely performed and inconsistent, but reports range from hypo- to iso-intense on T1 weighted and hypo- to hyperintense T2-weighted images [2,4,6].

In nearly every case it is impossible to differentiate MA from malignancy - especially hypovascular lesions (e.g. papillary RCC and Wilms tumour ) - and therefore excision is mandatory, making it a ‘surgical lesion’. 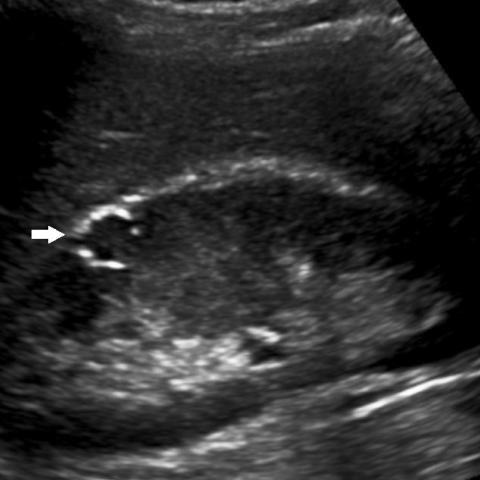 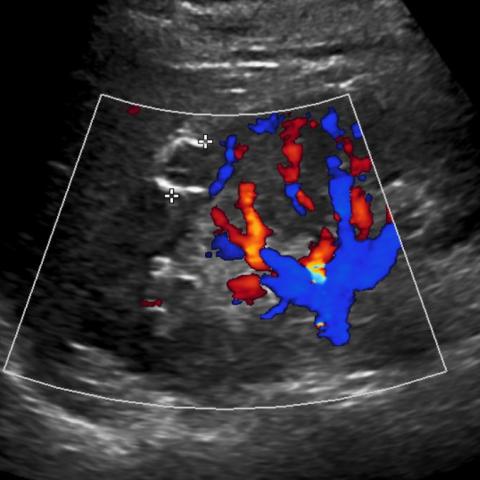 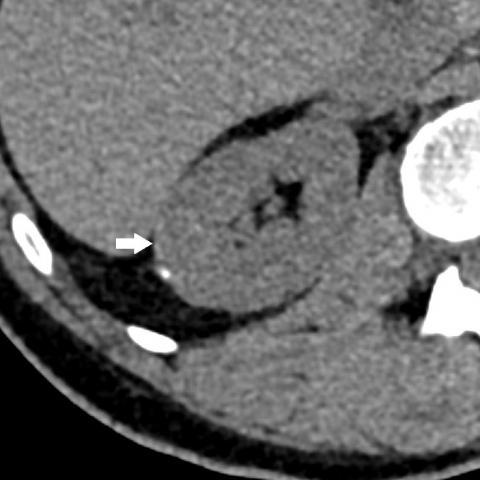 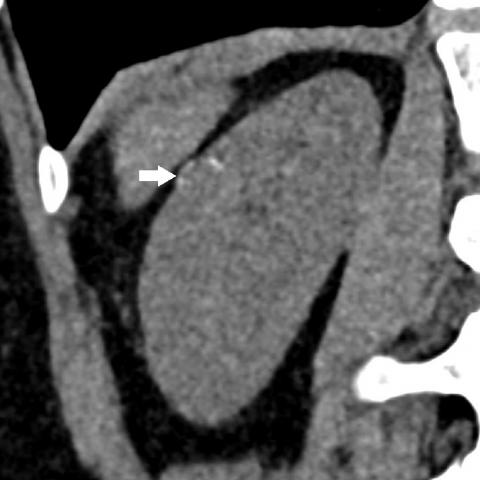 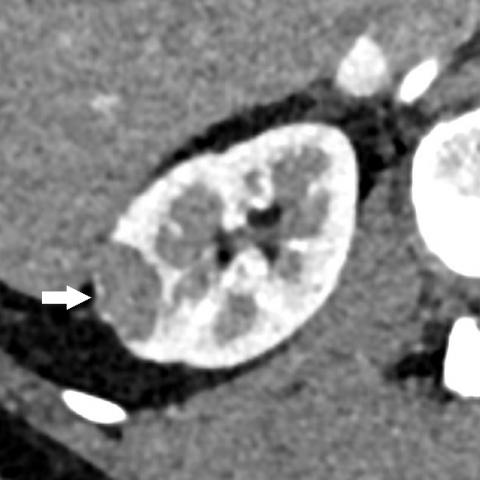 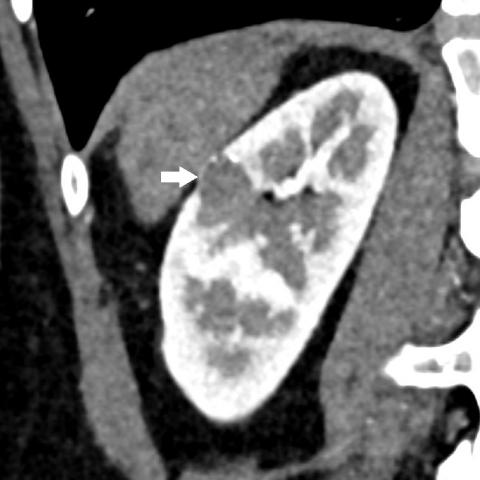 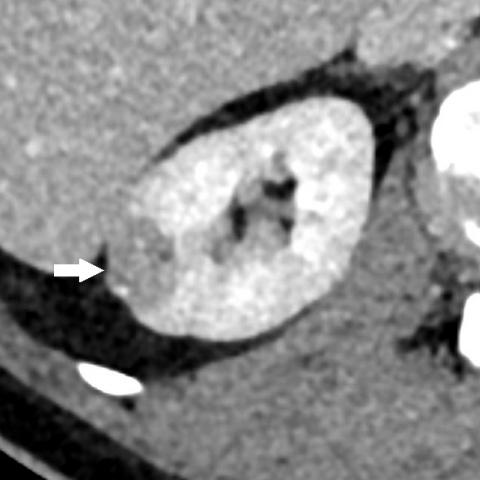 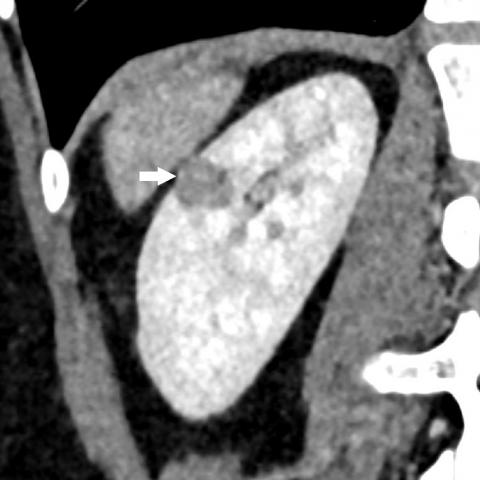 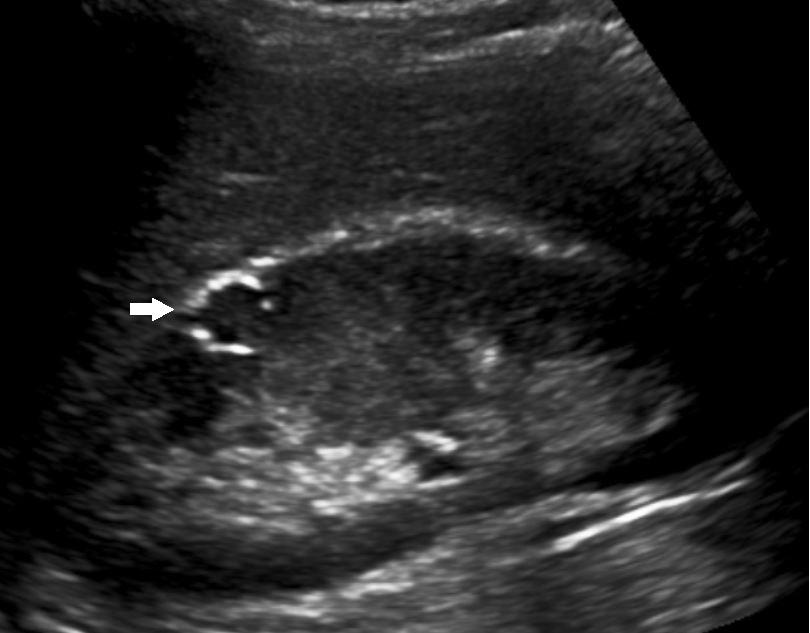 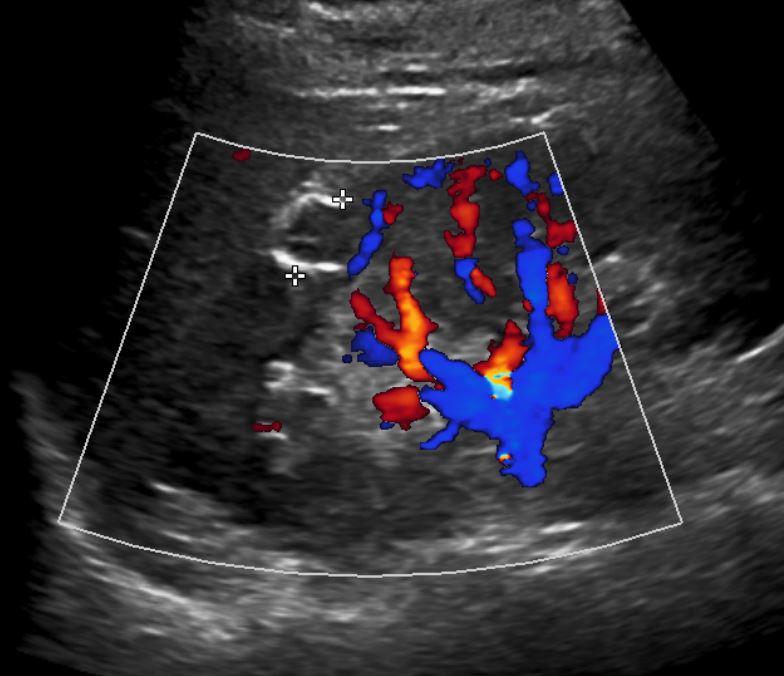 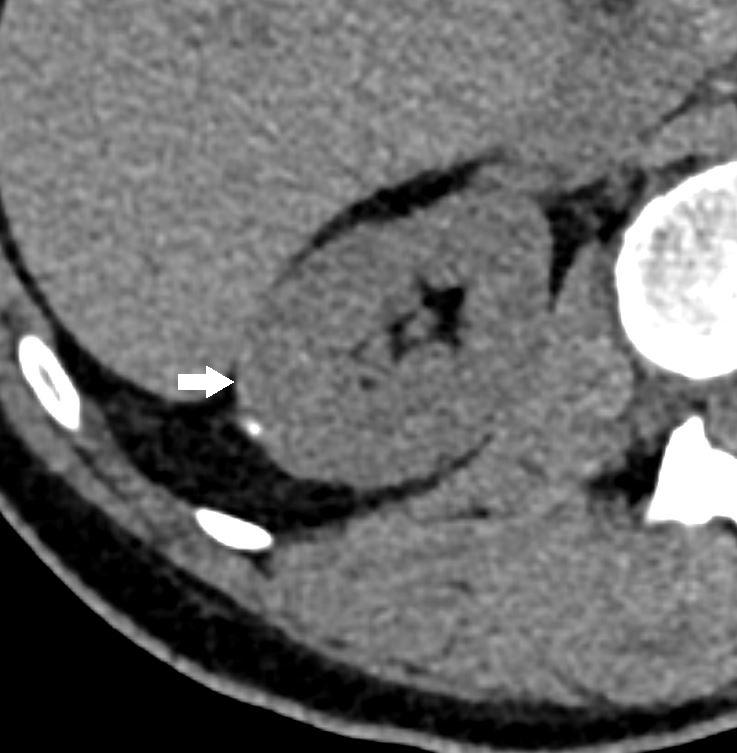 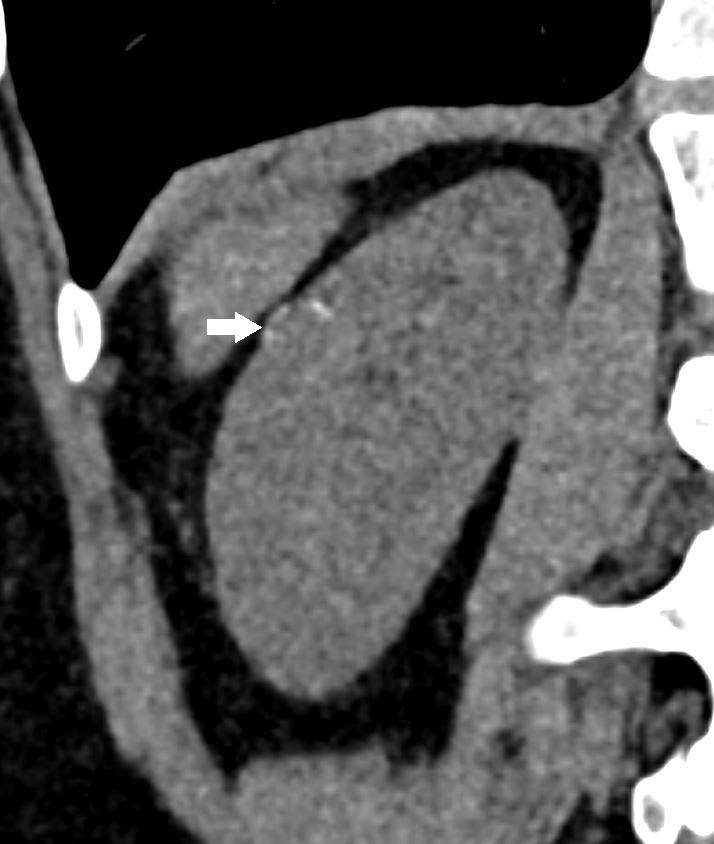 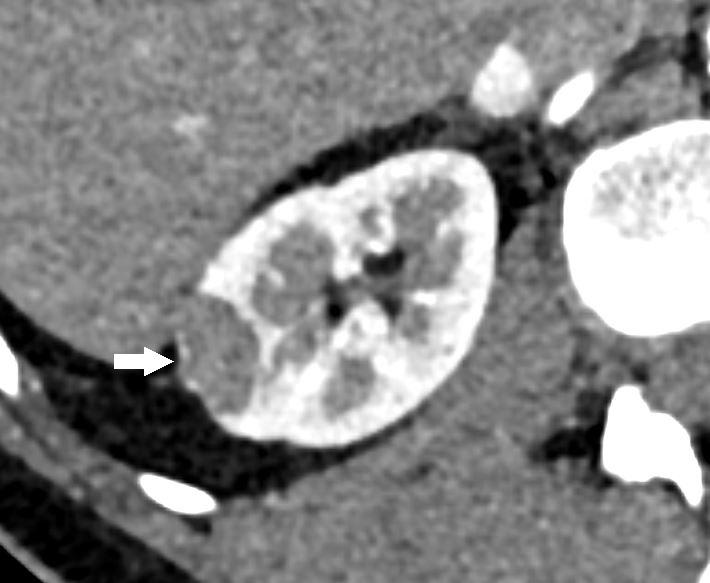 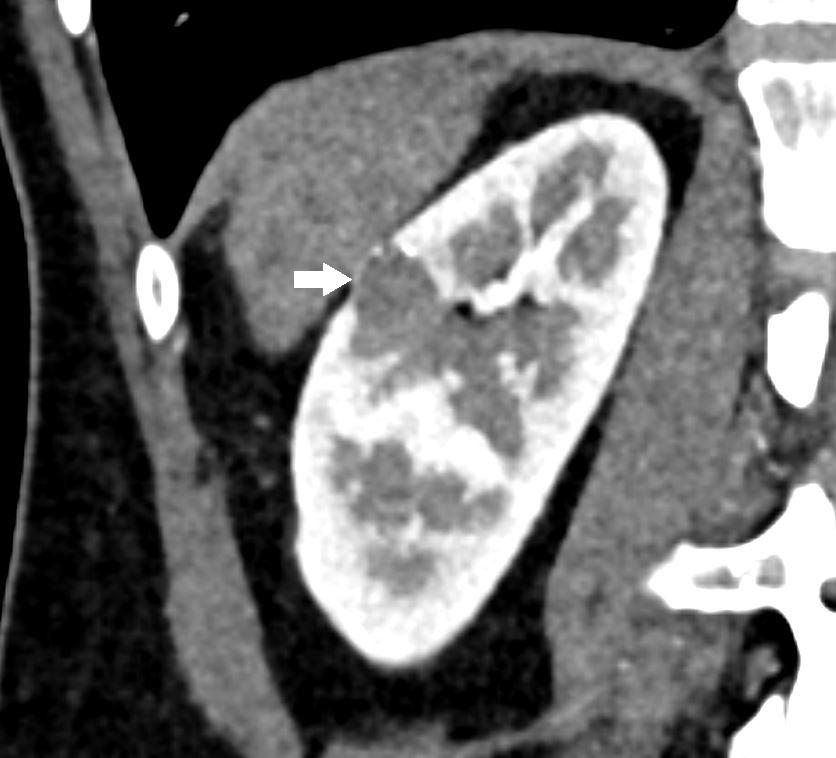 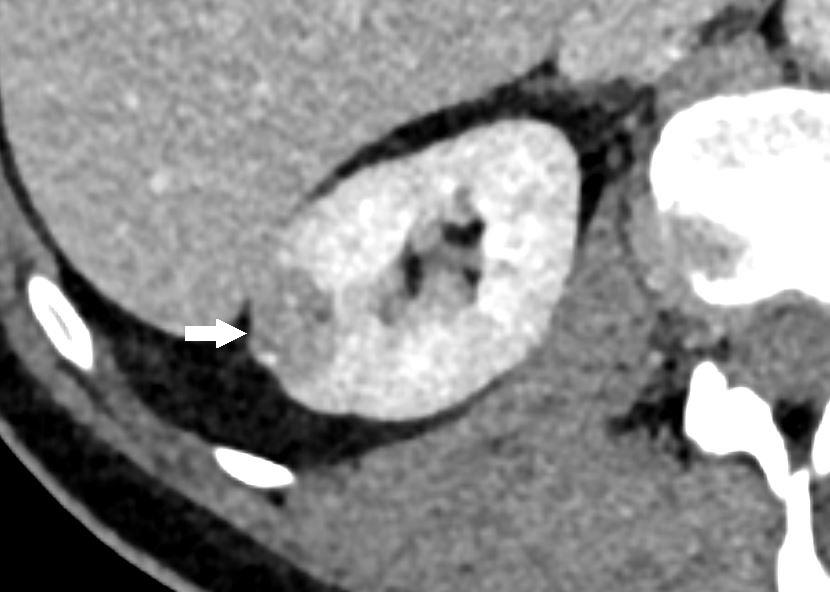 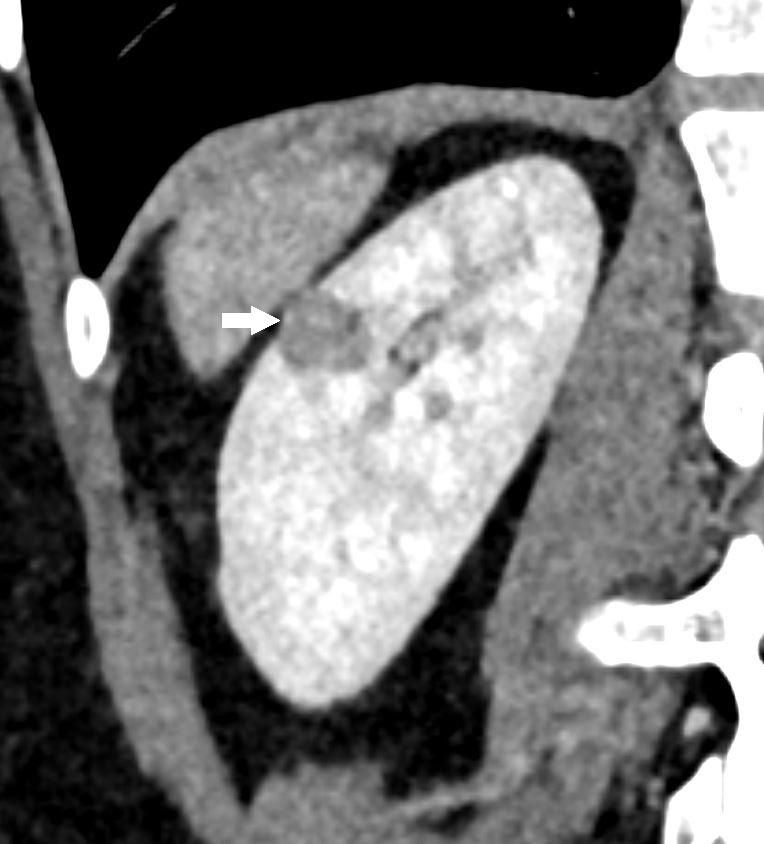