A 35-year-old woman presented with a lump in her left breast. No family history of breast cancer. No history of hormonal medications or breast trauma. On clinical examination, there was a large, soft, nodular, non-tender, mobile mass in the lower inner quadrant of the breast. No axillary lymphadenopathy.

On Mammogram, the inner lower quadrant of the left breast showed a circumscribed, oval heterogeneously dense mass containing radiolucent and radiopaque densities surrounded by a thin radiopaque capsule. No suspicious micro-calcifications or architectural distortion. No skin thickening or nipple retraction. No axillary lymphadenopathy.

Ultrasound showed a well-circumscribed oval-shaped mass, measuring 5.7x3.3cm, in parallel orientation to the skin with hyper-echoic and hypoechoic tissue components and showed no internal vascularity on colour Doppler. No suspicious axillary lymph nodes.

On MRI, a circumscribed oval mass with mixed-signal intensity, containing areas of bright signal intensity of fat within it on T1/T2 WI is suppressed on fat-saturated images. It appears bright on Diffusion-weighted and STIR images and showed progressive enhancement with contrast, type I enhancement time-intensity curve.

Excision biopsy was performed as the mass was slowly growing and patient had discomfort. Histology of the sample showed sheets of ductal cells and lobular units with varying amounts of adipose tissue and stromal fragments, no atypia.

Breast hamartoma/Fibroadenolipoma is defined as a well-circumscribed benign lesion composed of glandular tissue, epithelial elements, fibrous tissue and fat, which may be in normal or varying proportions [1].It is an uncommonly reported benign breast lesion of uncertain cause and pathogenesis. The reported incidence in the literature is between 0.1% and 0.7%, as described by Arrigoni et al. in 1971[2]. The majority of affected patients are >35 years old, with a mean age of ~45, and the tumour exhibits a female predominance [1].

Clinically, breast hamartomas present as asymptomatic, or as soft, round, or oval nodular masses that are smooth surfaced and mobile against the surrounding tissues [3]. Although, it is histologically benign, in situ and infiltrating carcinomas may arise within hamartomas [4]. A fairly recent review of the literature described 15 cases of carcinoma associated with hamartomas [5]. Thus looking for suspicious findings as microcalcifications on mammograms, lobulated appearance, or irregular hypoechoic area on ultrasound and suspicious/focal enhancement patterns (type II or type III curve) on MRI would help in detecting indolent carcinomas. The mass in our case showed benign findings such as smooth capsulated mass with homogenous enhancement and persistent type I curve on enhancement pattern.

Mammographically, a breast hamartoma is a well-circumscribed mass containing fat and soft tissue. The classic appearance of hamartoma is a mass surrounded by a thin radiopaque line (pseudocapsule), which can often be observed [1].

The US presentations of hamartomas differ widely owing to the marked variability in the adipose and fibrous tissue contents. In most cases, they appear as solid, well-defined, oval formations lying parallel to the skin plane. The echo structure is inhomogeneous with hypoechoic areas intermixed with hyperechoic band-like or nodular areas, reflecting the presence of adipose, epithelial, and fibrous connective tissues [6].

If the mass is well circumscribed with characteristic pseudocapsule and no suspicious features of malignancy such as irregular, spiculated mass or microcalcifications, then there is no need for further imaging with MRI or biopsy procedure. Mammography and ultrasound features of hamartoma are sufficient for making the diagnosis.

Further assessment with biopsy and /or MRI is indicated in cases with suspicious findings on ultrasound or mammogram.

On MRI appearance, T1- and T2-weighted sequences, the mass generally exhibits heterogeneous signal intensity, reflecting the presence of glandular and adipose tissue components, and a thin capsule. After administration of contrast medium, hamartomas show a gradual, progressive enhancement with a type I time/intensity curve. If suspicious features are noted, especially on mammography or ultrasound, contrast-enhanced MRI can be useful in establishing a diagnosis [6, 7,8].

The final clinical diagnosis of hamartoma is based on the findings of mammography, ultrasound, and if necessary MRI and biopsy of the mass [1].

Biopsy is indicated if there is any suspicious finding on MRI, such as spiculated mass with low T2 signal intensity, plateau or wash-out type enhancement pattern.

It is believed that no recall is required in a classical look of hamartoma in mammogram; however, lesions with abnormal growth pattern and atypical features need further assessment (biopsy and /or MRI) as even if only rarely breast carcinoma can develop in hamartoma [9].

Thus, imaging plays a very crucial role in the diagnosis and management of hamartomas. 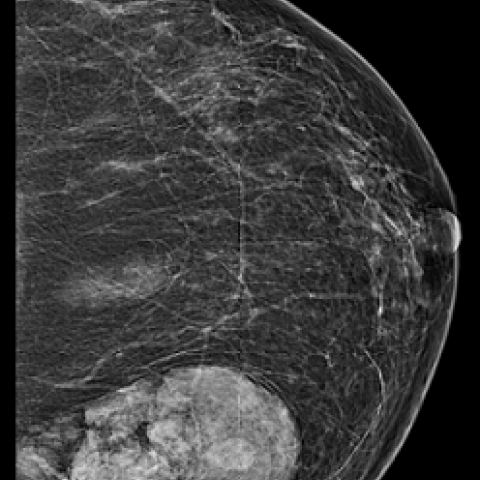 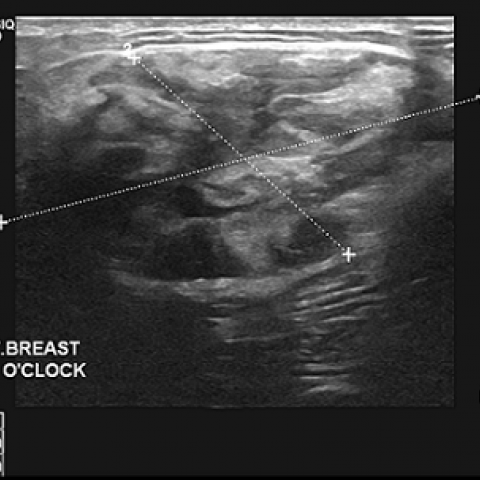 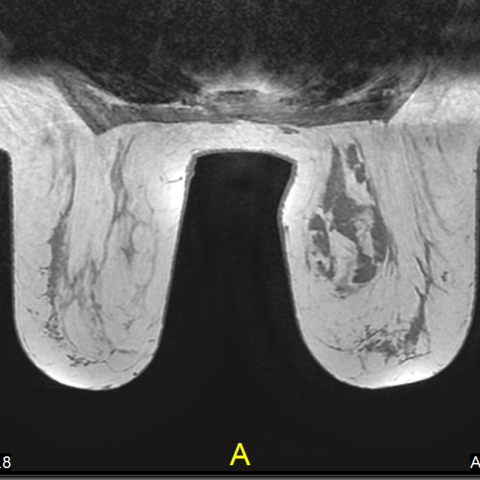 MRI showed a circumscribed oval mass with mixed signal intensity on T1WI, containing areas of bright SI of fat within it which is suppressed on fat saturated images 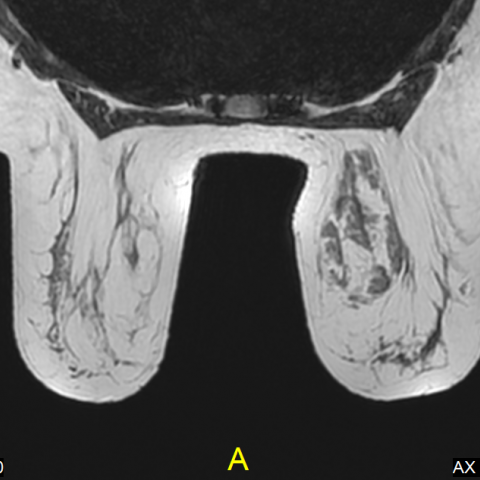 MRI showed a circumscribed oval mass with mixed signal intensity on T2WI, containing areas of bright SI of fat within it which is suppressed on fat saturated images 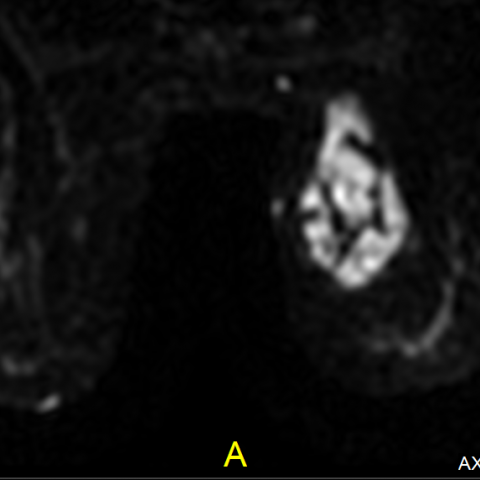 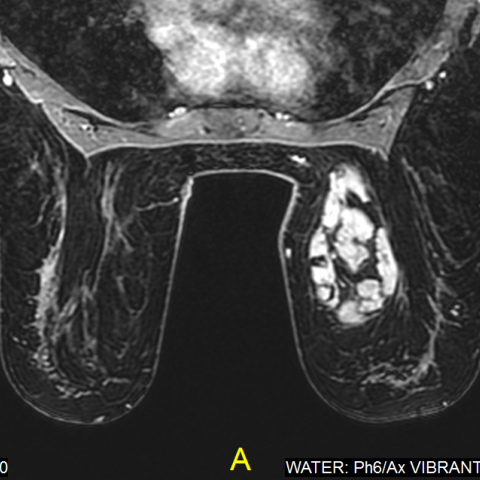 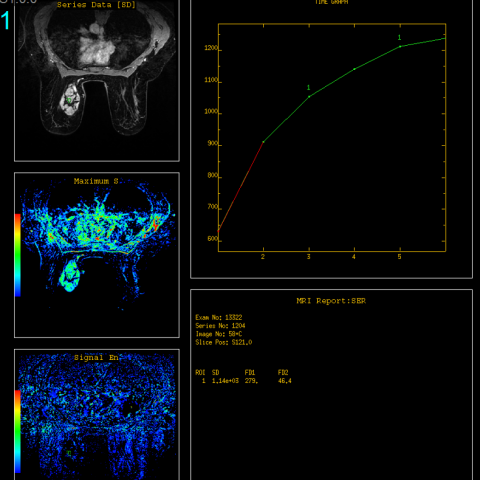 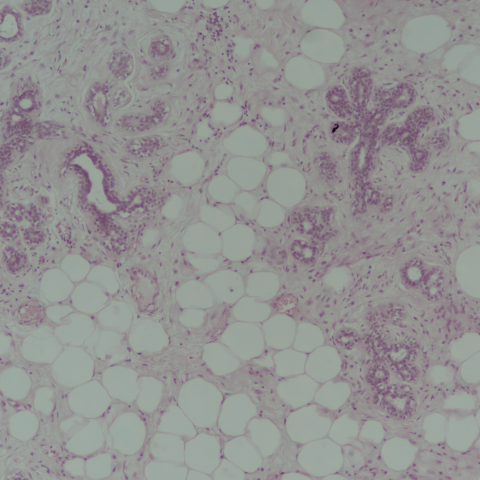 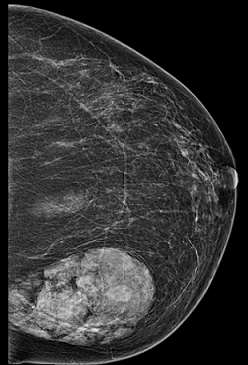 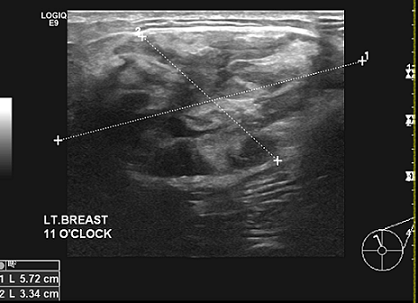 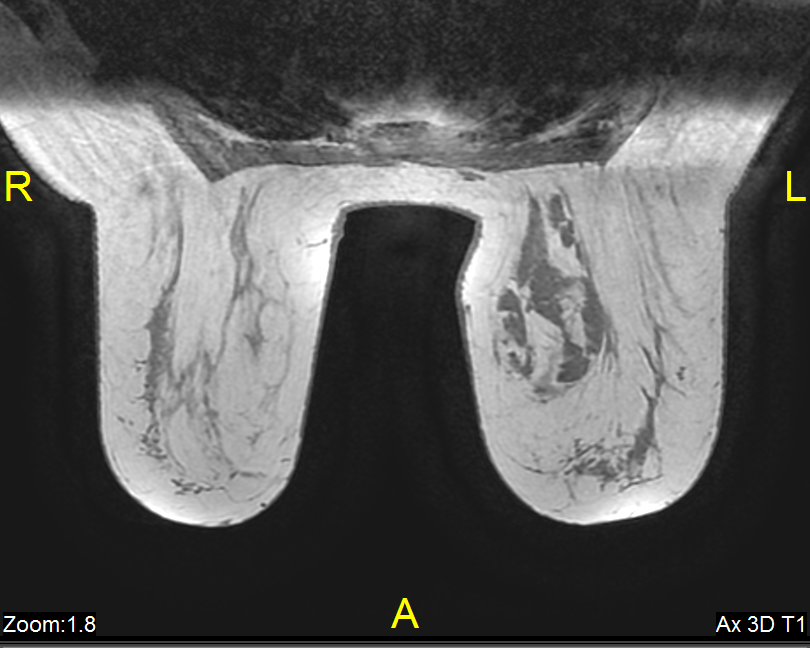 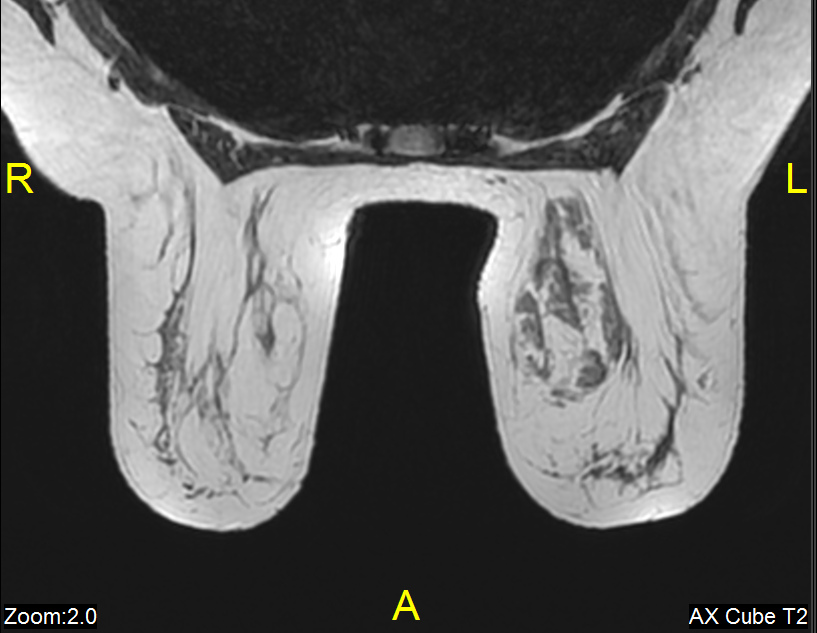 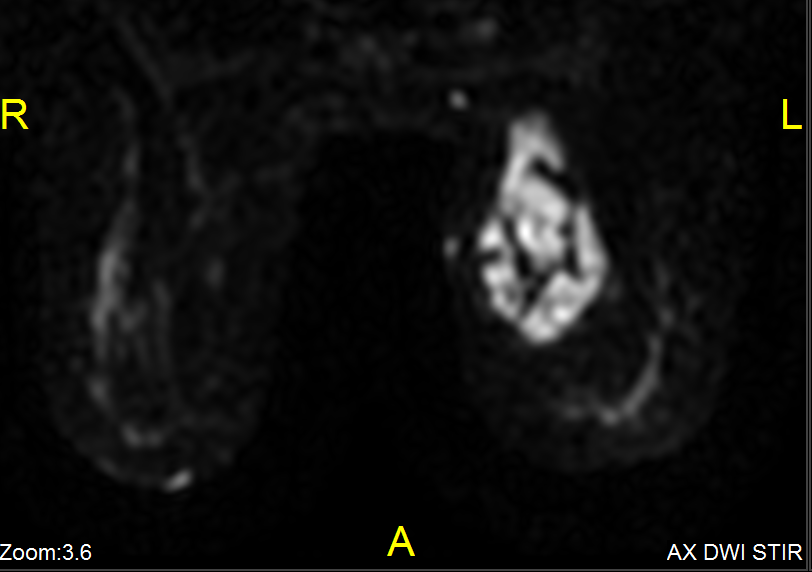 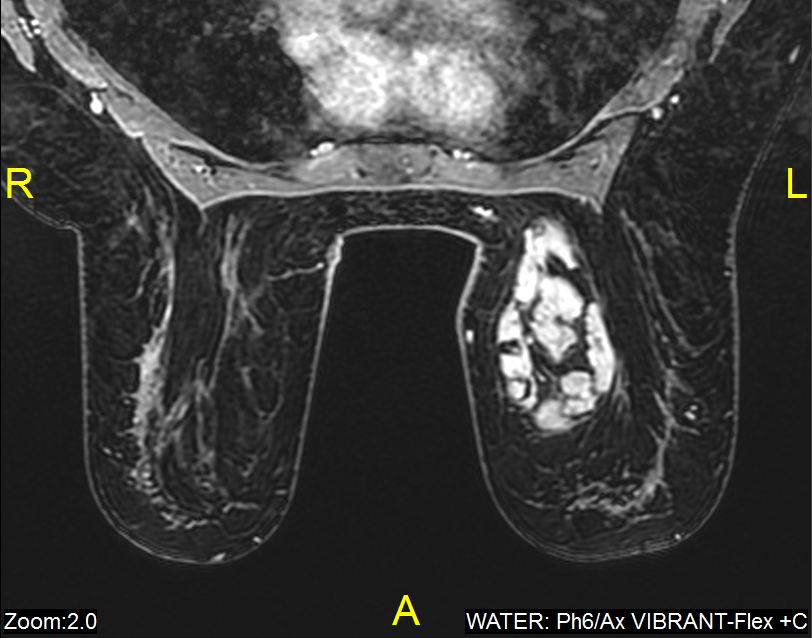 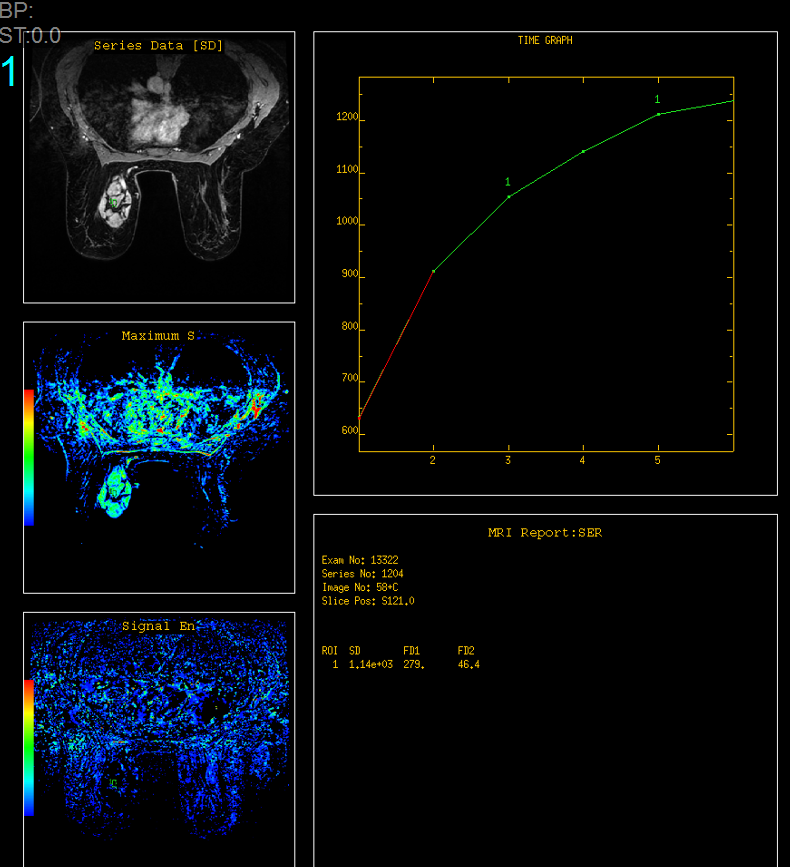 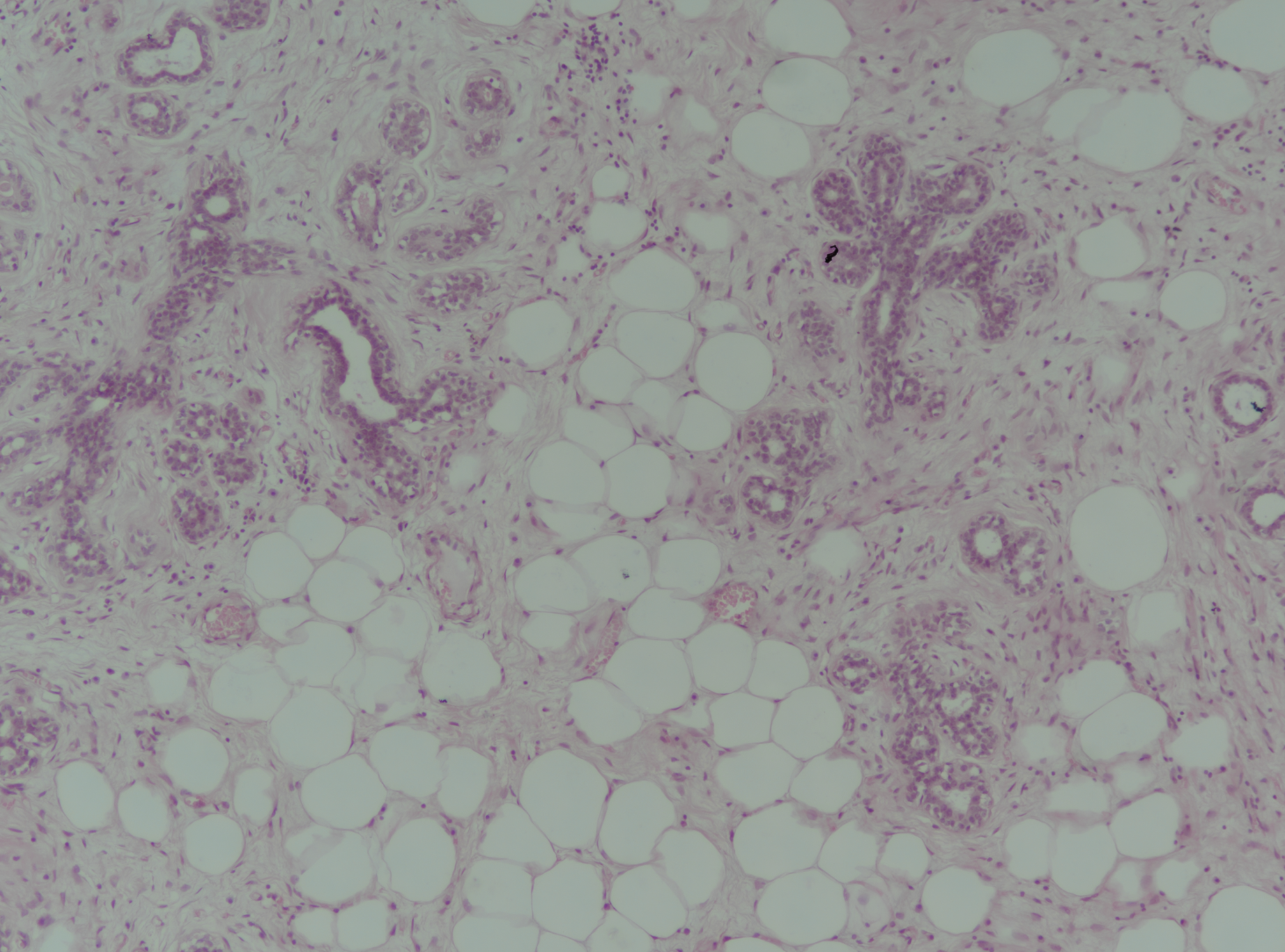