Case of multiple pulmonary metastasis from a benign intercranial meningioma

A 59-year-old Caucasian male presented to our institution following a witnessed seizure with a background history of a previously excised WHO grade-2 frontal meningioma and stereotactic radiation therapy. Other previous history included further debulking surgery in due to significant growth with suspicion of focal brain invasion.

A CT brain performed on presentation to our Emergency Department, demonstrated no interval change from multiple prior surveillance studies.

Surprisingly, a routine chest radiograph performed to investigate anterior chest wall pain (Figure 1), demonstrated multiple, well-circumscribed non-cavitating round opacities (cannonball lesions) in the lungs bilaterally measuring up to 60 mm. Importantly, the clinical history was devoid of respiratory symptoms such as cough and dyspnoea.

CT Thorax (Figure 2a, b) subsequently revealed multiple pulmonary metastases. Of note, the patient last chest imaging was from 2013, which showed no evidence of metastatic disease.  CT Abdomen and Pelvis imaging showed no synchronous neoplastic pathologies to account for the metastatic disease in the lungs and further investigation with sigmoidoscopy and endoscopy were reported as normal. Furthermore, biopsy from one of the lung lesions confirmed the diagnosis of metastatic meningioma and treatment with Sumatinib, a Tyrosine kinase inhibitor, was commenced.

Mostly benign with slow growth rate, accounting for 94% of cases, and rare tendency to metastasise (<1%) meningiomas are the most common primary intracranial tumours. [1]. Broadly divided into three histologic grades, meningioma can be typical/benign (WHO grade-1), atypical (WHO grade-2) or anaplastic (WHO grade-3).

Metastasis from Grade-2 and Grade-3 have been reported in up to 5% and 30% of the cases respectively. Review of the literature shows that the lung is the most common organ for metastasis (61%) followed by the pleura, liver, abdominal viscera, lymph nodes and bones. [2]

Risk factors for metastasis include previous craniotomy, venous sinus invasion, local recurrence, and aggressive histological subtypes. Hematogenous metastasis may be the most likely mechanism for extracranial spread with 70% of patients reporting to have had metastatic disease following a craniotomy. [3]

A second route believed to lead to the development of distant metastasis may be via the cerebrospinal fluid pathway [4]. It is hypothesised that surgical interference may release the tumour cells from their cohesive state into the cerebrospinal fluid. The local recurrence rates even after complete resection vary from 9 to 32%. Despite relatively large number of surgical resections performed each year, metastasis remains rare at less than 1%.[4]

There is no standard treatment with curative intent for metastatic meningioma. Complete surgical resection for accessible intracranial meningiomas is the mainstay of treatment for WHO grade-1 meningiomas, whereas grade-2 and 3 tumours often require adjuvant treatment, either radiotherapy or stereotactic radiosurgery. Postoperative radiotherapy has been recommended for prevention of local recurrence, especially when resection is subtotal or when the histology is suggestive of aggressive histology.[5]

Surgical resection of pulmonary lesions is restricted to those patients who have no extra-thoracic metastatic disease and only if all metastatic lesions could be excised without affecting residual pulmonary function. New approaches which combine the use of chemotherapy and targeted treatments are currently ongoing in clinical trials. [6]

Meningioma metastasis to the lung should be suspected if there is history of treated meningioma and multiple pulmonary lesions on chest imaging, particularly if the patient is asymptomatic. Biopsy of the pulmonary lesions is ultimately the only way to confirm. FDG PET/CT is helpful to exclude an occult alternative pathology. 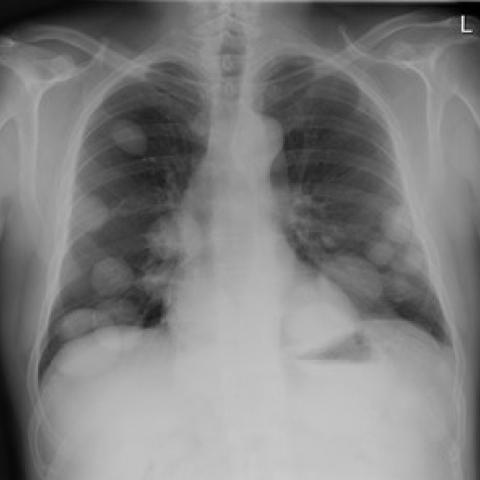 Multiple cannon ball opacities in the lungs bilaterally measuring up to 60 mm in keeping with metastatic disease.
Figure 2 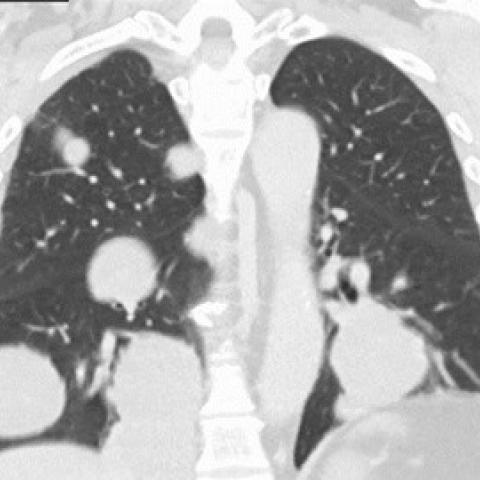 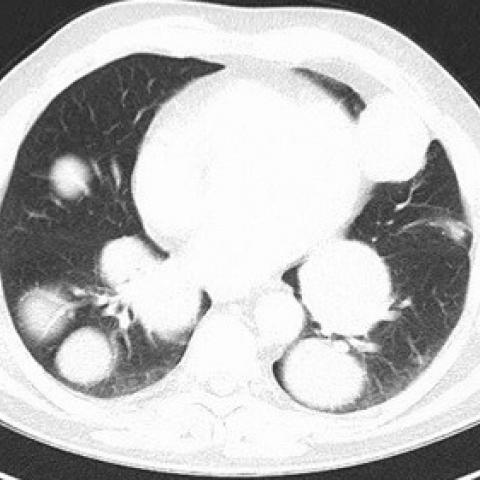 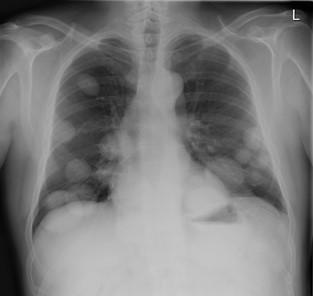 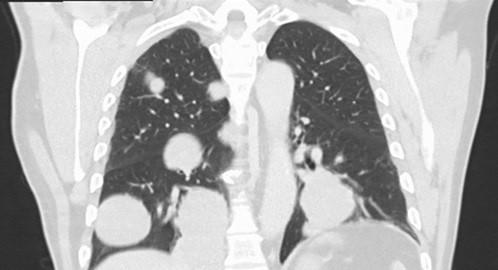 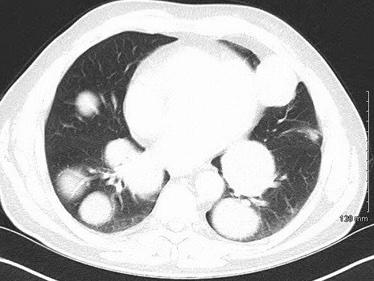