A 48-year-old woman with no history of interest presented to the emergency department with progressive weakness and sensitivity loss in her right hand.

Non-enhanced CT scan shows two hypodense lesions in the left centrum semiovale, the biggest one with a rounded morphology, and the smallest one, oval-shaped, cranial to the first one. After an intravenous bolus injection of contrast medium, the biggest lesion presents with ring enhancement.

Both lesions are hyperintense in T2-weighted MRI study, identifying another one in the right centrum semiovale, not seen in previous CT scan. The biggest lesion in the left centrum semiovale presents the most characteristic imaging appearance, showing irregular concentric areas alternating isointense and hyperintense T2 signal, a characteristic “bull’s-eye” appearance. On diffusion-weighted images (DWI), it presents with restriction areas in the outer ring, and after contrast injection, a subtle open-ring enhancement is shown. The smallest ovoid-shaped lesions are perpendicular to the body of the lateral ventricles, which is known as the classical distribution of the “Dawson fingers”.

Multiple sclerosis (MS) is the most common chronic demyelinating disease that affects the central nervous system in Western countries [1]. It is an autoimmune disorder of unknown aetiology, characterized by perivenular inflammation and demyelinating areas with relative axonal preservation [2]. It is the first cause of neurological deficit in young adults, which results in partial loss of personal autonomy after 20 years of disease and a reduction in life expectancy by 1 – 14 years [2]. MS affects women predominantly, mainly between the ages of 20-40 with a peak of incidence in the 3rd decade but can occur at any age [2]. This disease shows great geographic variability, being more frequent in northern Europe and areas further away from the equator [2]. There are multiple clinical variants of MS, including tumefactive demyelinating lesions (TDLs), Marburg and Schilder variants, Balo’s concentric sclerosis and neuromyelitis optica (NMO) [2].

Balo’s concentric sclerosis was first described by Joseph Balo in 1928 [3].  It shows a lamellar demyelination pattern, which may not be present if the disease is found in early stages [4-6]. Clinical course is variable, some cases have involved young adults and have resulted in death within weeks to months, other cases, however, have been described as showing prolonged survival or even spontaneous remission [4].  An asymptomatic case detected at necropsy was also reported [4]. It is believed that MRI has had a significant role in reducing morbidity and mortality, allowing earlier diagnosis and therapy [4].

Patients usually present symptoms of an acute/subacute onset that progresses over a period of weeks to months, such as headache, aphasia, seizures or cognitive dysfunction, suggesting a space-occupying lesion of the brain [4]. CSF examination often shows a mononuclear inflammatory pattern and occasionally oligoclonal [4]. Concentric layers of alternating demyelination and preserved myelin is seen in histopathological specimens [4, 5, 7]. MRI studies exhibit irregular concentric areas alternating hypointense and hyperintense T2 signal, a hyperintense outer ring in T1 sequence after contrast injection and restricted diffusion in the outer ring, which represents the area of active demyelination [5-7]. These findings are accurately correlated to the histopathological specimens [5-7].  The open ring sign after contrast administration is also considered a very specific sign in demyelinating disease. Given its almost pathognomonic appearance, this disease is currently being diagnosed by radiological evidence without histopathological verification [4, 6].

Differential diagnosis includes MS variants and other demyelinating diseases such as acute disseminated encephalomyelitis (ADEM), neoplasms and infections [4]. The first one, ADEM, doesn’t demonstrate the concentric ring pattern seen in the most representative lesion and usually presents with a clinical history of viral infection or vaccination a few weeks ago.  Neoplasms such as glioblastomas have a wide range of presentation and Balo´s concentric sclerosis can frequently simulate these entities, although a few differential characteristics such as having an irregular, gross and closed ring enhancement together with the patient’s clinical history can help to differentiate them and to avoid biopsy. Metastases are often multiple, localized most frequently in the cortico-subcortical junction, and enhancing pattern may be uniform, punctate or closed-ring enhancing, open-ring enhancing is uncommon. Brain abscesses have a characteristic restricted-diffusion central area, whereas Balo’s restricted diffusion area is peripheral. They also show a thin and regular enhancing rim as well as a low T2 signal capsule. 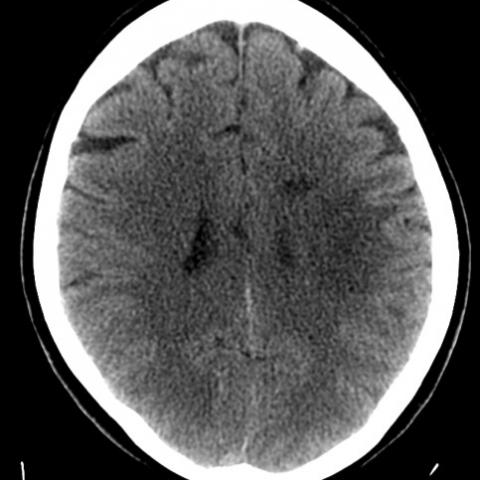 Axial non-enhanced CT. Two hypodense lesions in the left centrum semiovale, a rounded one and an oval one perpendicular to the lateral ventricle.
Figure 2 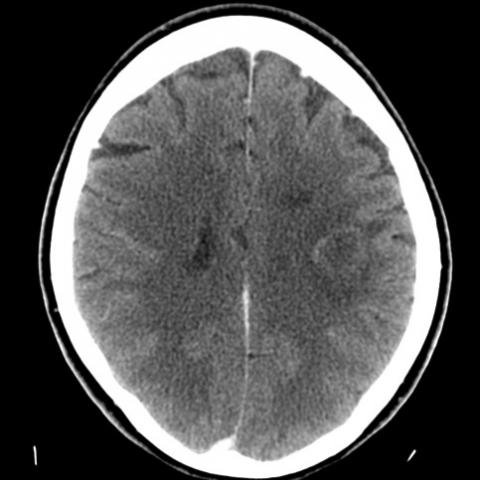 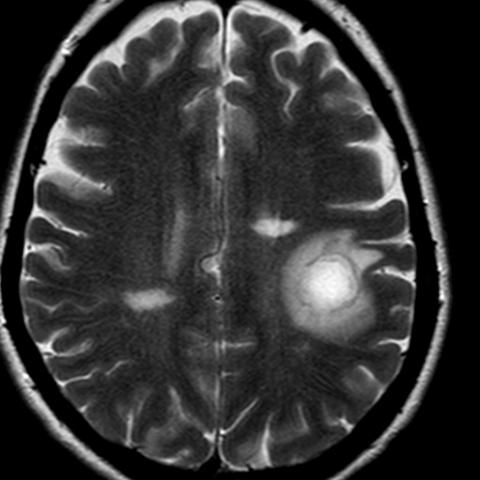 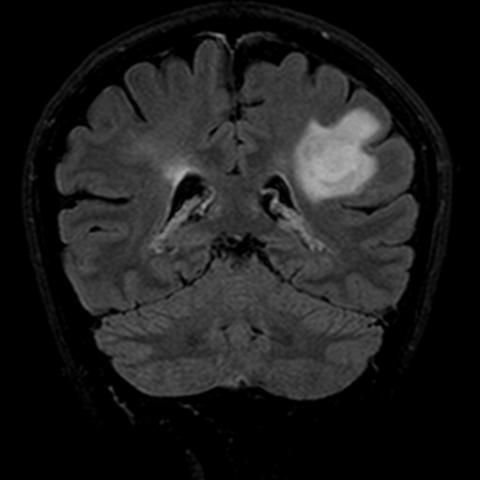 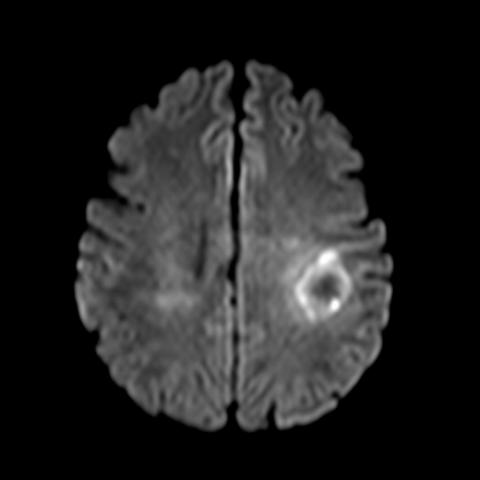 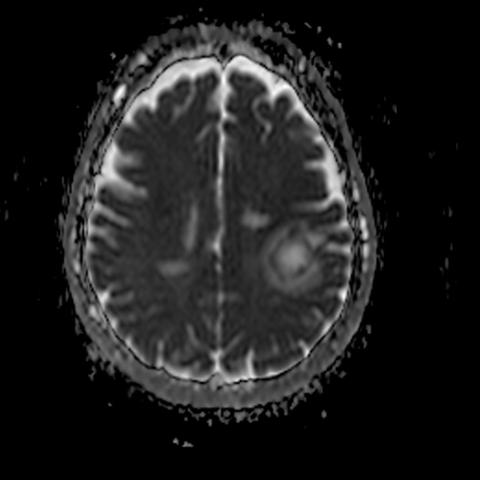 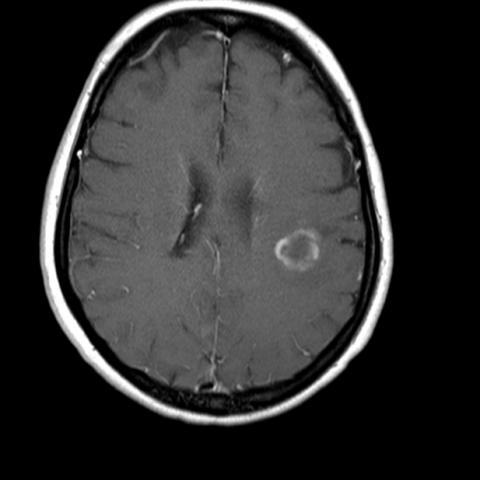 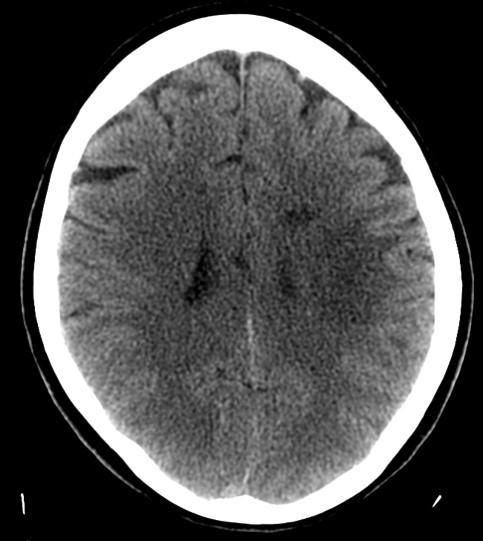 Axial non-enhanced CT. Two hypodense lesions in the left centrum semiovale, a rounded one and an oval one perpendicular to the lateral ventricle.
Department of Radiology, Hospital Universitario Dr. Peset, Valencia, Spain. 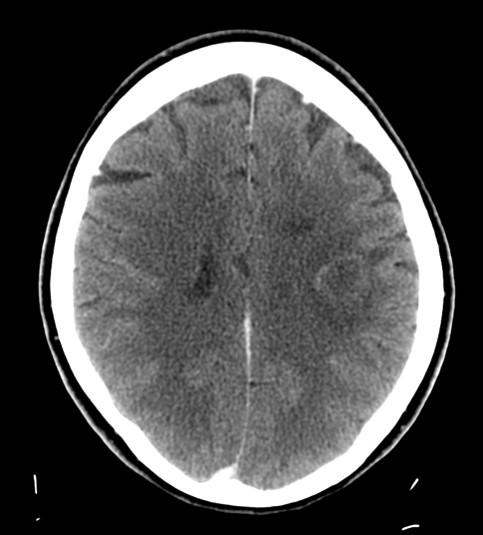 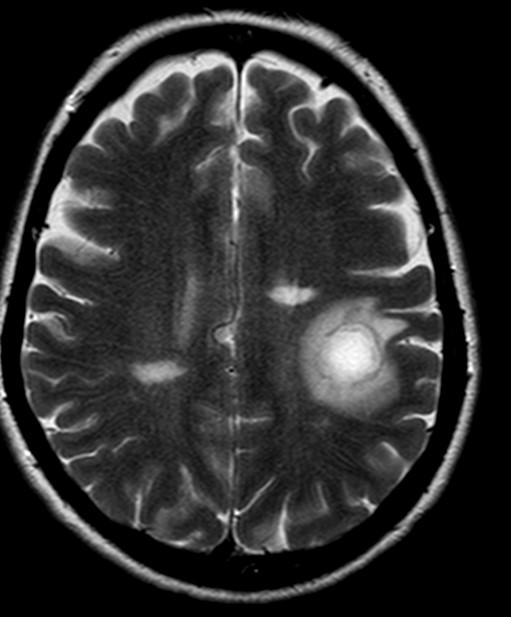 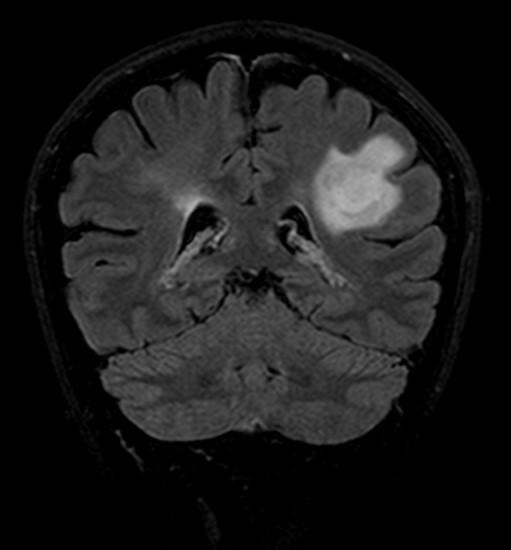 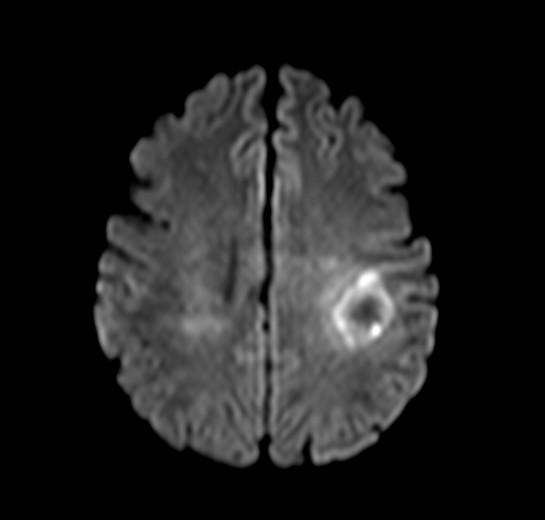 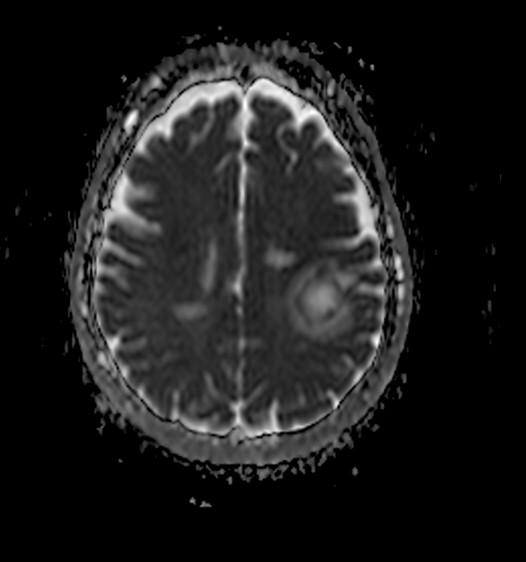 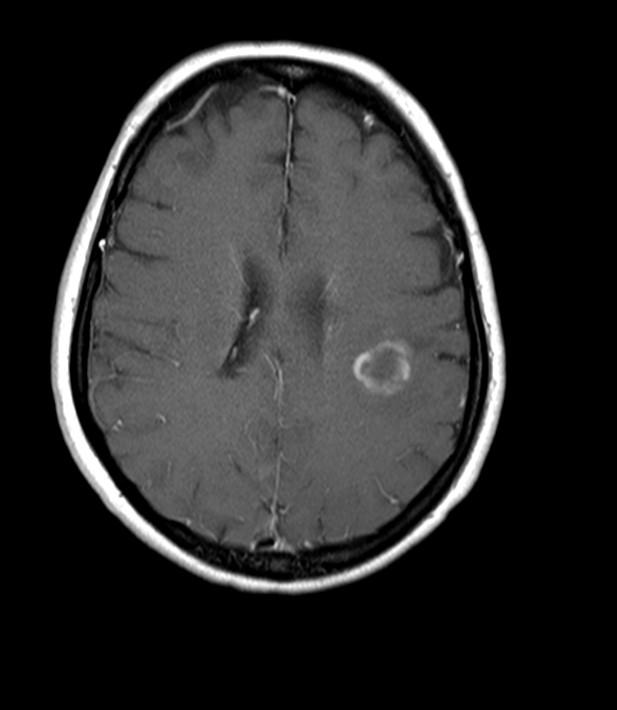