Pulmonary mucormycosis: a rare and fatal complication in a young diabetic patient

A 27-year-old female was admitted with diabetes decompensation secondary to severe community-acquired pneumonia. After 2 weeks in the ICU and no improvement despite broad-spectrum antibiotic treatment, a CT scan was requested. Based on the findings, bronchoscopy and biopsy were performed, which gave the diagnosis.

In a follow-up CT pulmonary angiogram, the consolidations showed necrosis and cavitation (Fig. 4). Left lung involvement had also worsened. Signs of vascular invasion evolved into irregularity of the interlobar and inferior lobe pulmonary arteries, with stenosis, dilation, and pseudoaneurysm formation (Fig. 5 and 6). The left pulmonary veins were also compromised (Fig. 6).

Pulmonary mucormycosis is an uncommon opportunistic pulmonary fungal infection caused by Mucorales fungi belonging to the class Zygomycetes [1]. It is an angioinvasive infection often leading to pulmonary infarction and invasion of tissues by contiguity. Mucormycosis usually occurs in immunocompromised patients with haematologic malignancies, particularly after a solid organ or stem cell transplant. Nowadays, diabetes mellitus as an isolated risk factor, as in our case, is very rare [2].

Pulmonary mucormycosis may have a nonspecific appearance at imaging. It can manifest as a reverse halo sign on CT [2,3], consistent with a thick solid area of consolidation with central ground-glass opacity, a frequent and relatively specific sign of mucormycosis in the appropriate clinical setting. Vascular findings include arterial filling defects (fungal emboli) and pulmonary artery pseudoaneurysm formation due to direct invasion of the arterial walls. In this sense, the vascular cutoff sign [3] refers to an abrupt termination of a branch of the pulmonary artery. Some severe cases may show a pattern of multifocal pneumonia [3], which is associated with high mortality and simulates multifocal bacterial pneumonia. Identification of the hyphae in tissue by using endobronchial or percutaneous sampling can allow differentiation from invasive pulmonary aspergillosis and help confirm the diagnosis of mucormycosis [2].

This opportunistic aggressive fungal infection is far less common than Aspergillus and Candida infections and has a much higher mortality rate [4,5]. Surgical treatment in conjunction with systemic antifungal therapy has been shown to significantly improve survival compared with antifungal therapy alone. Prompt and effective therapy is essential for a successful outcome [2]. Our patient, despite treatment with specific antifungals, developed severe haemoptysis with rapidly progressing clinical deterioration resulting in death.

Pulmonary mucormycosis is an uncommon, usually fatal, opportunistic infection, often manifesting with the reversed halo sign on CT, which is highly specific for the disease in the appropriate clinical setting. It may also cross pleural surfaces and invade vascular structures and tissues by contiguity. Today, diabetes as the only risk factor is very uncommon. 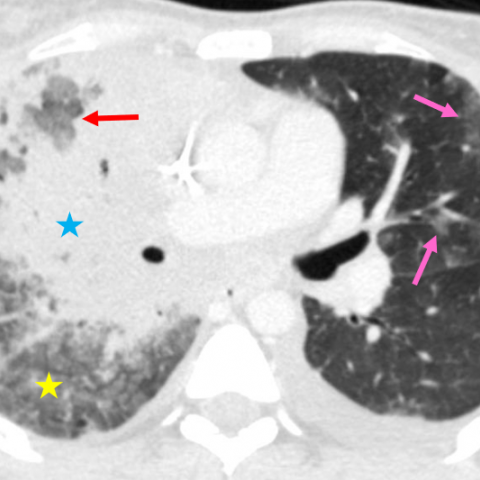 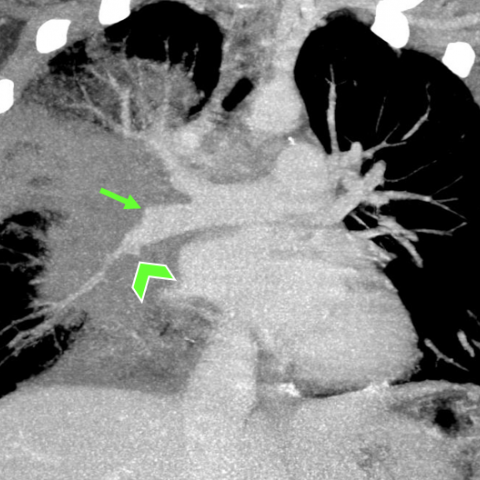 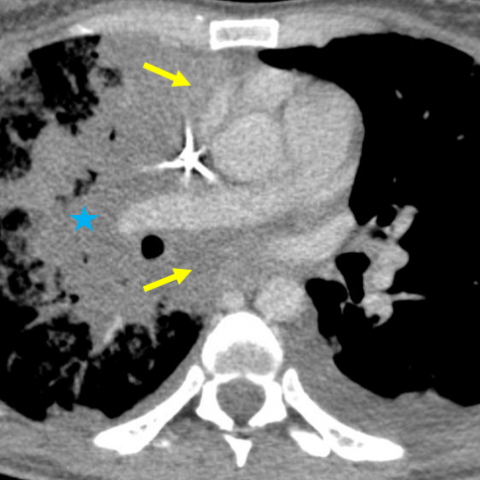 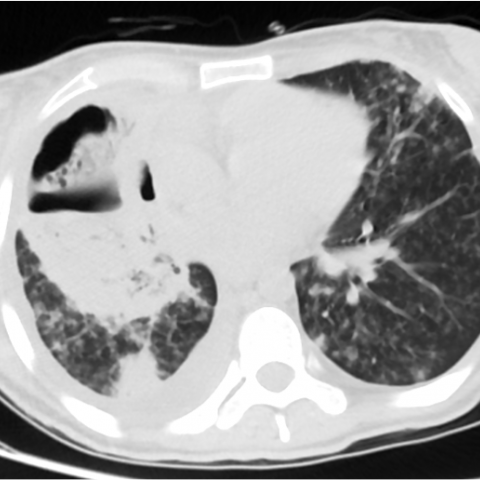 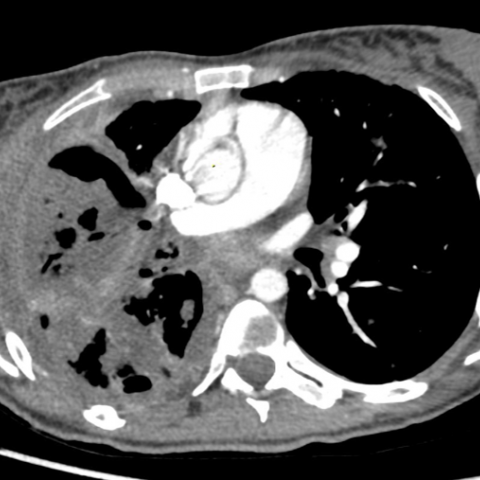 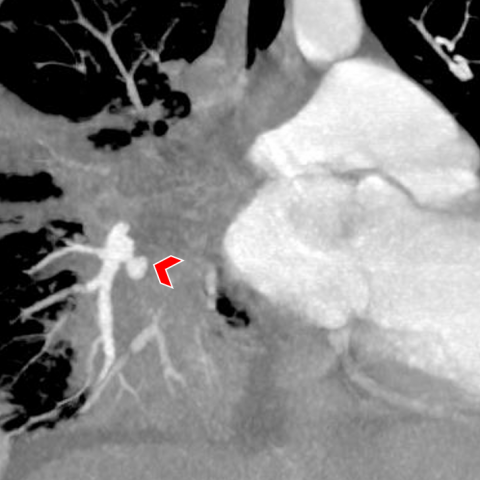 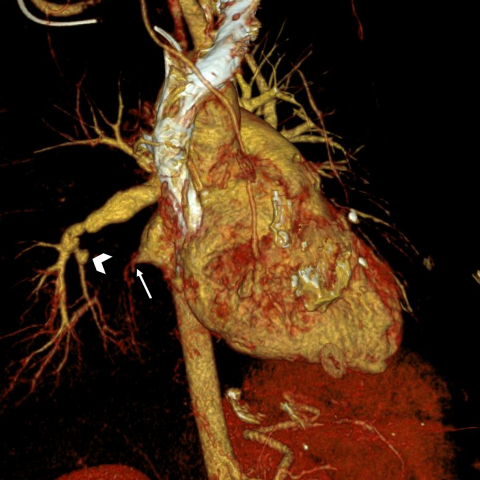 Volume-rendered image reconstruction showing irregularity of the interlobar and inferior lobe pulmonary arteries, with stenosis, dilation, and a pseudoaneurysm (arrowhead). The inferior left pulmonary vein is hardly visible (arrow) and the superior pulmonary vein was absent. 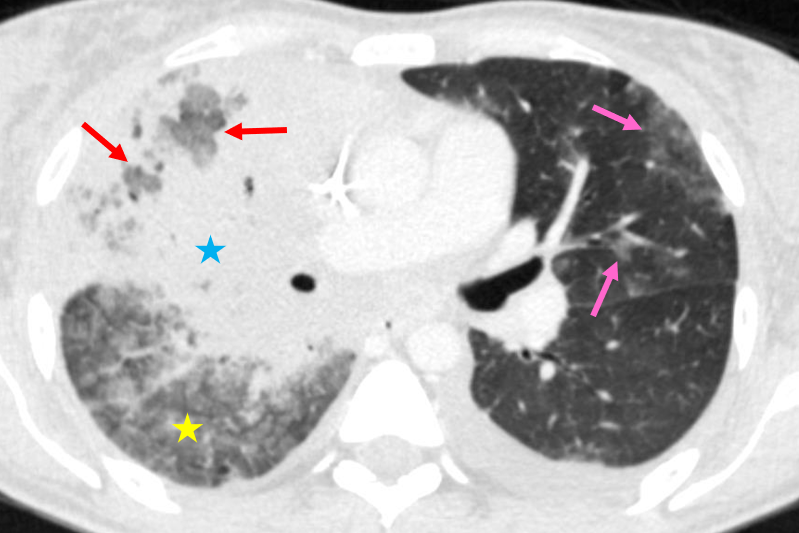 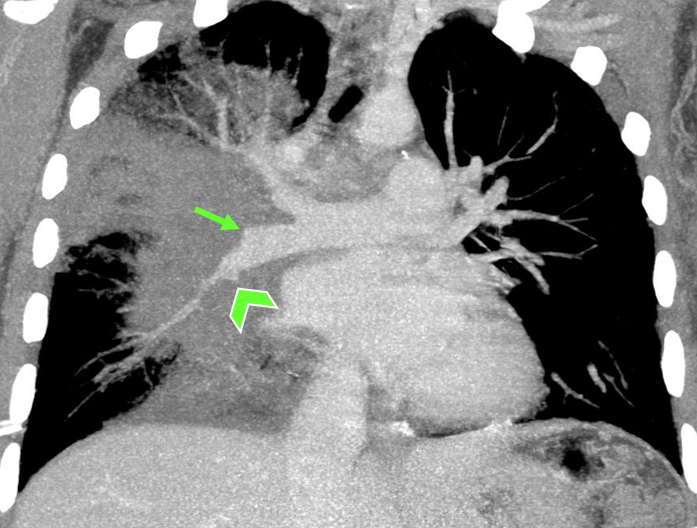 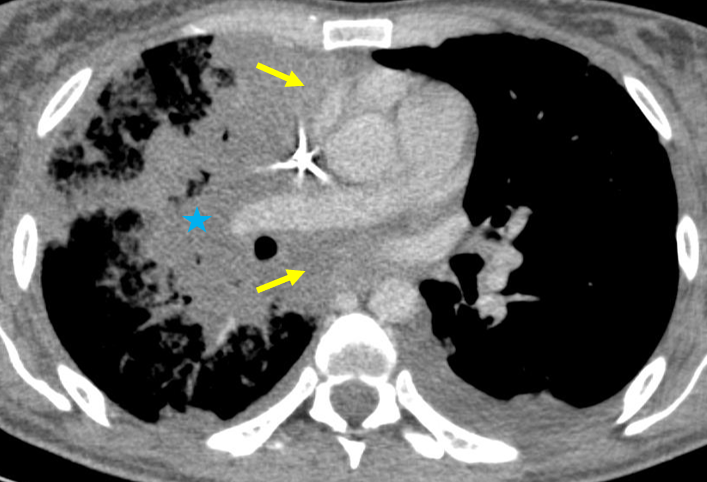 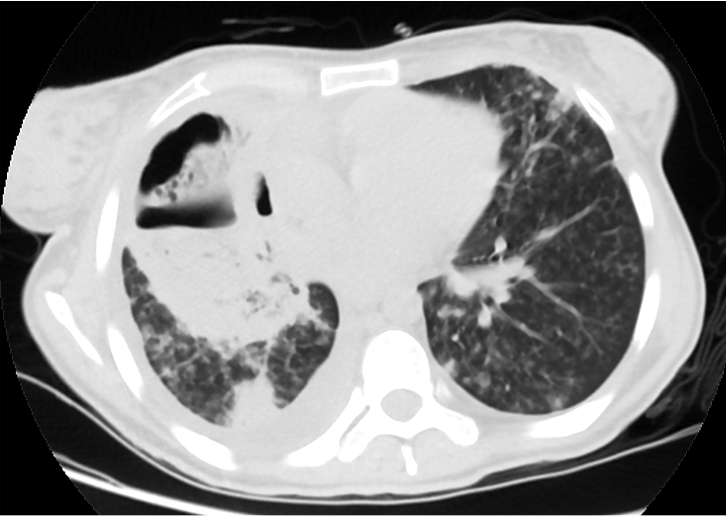 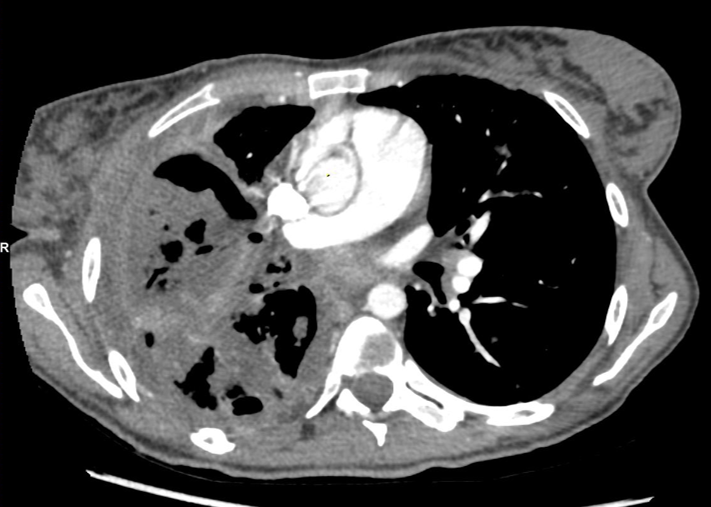 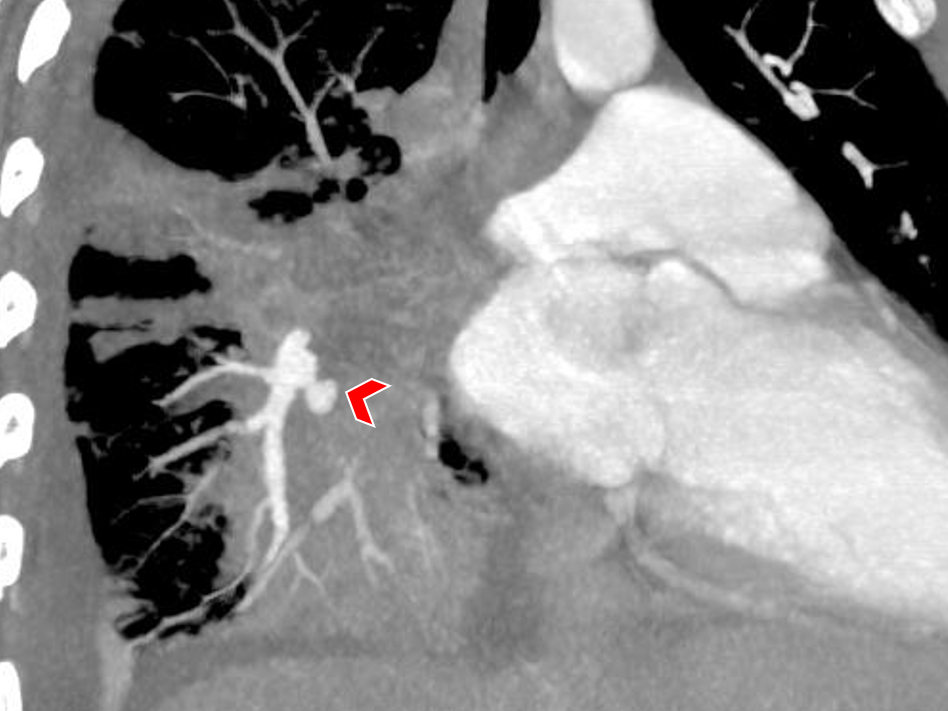 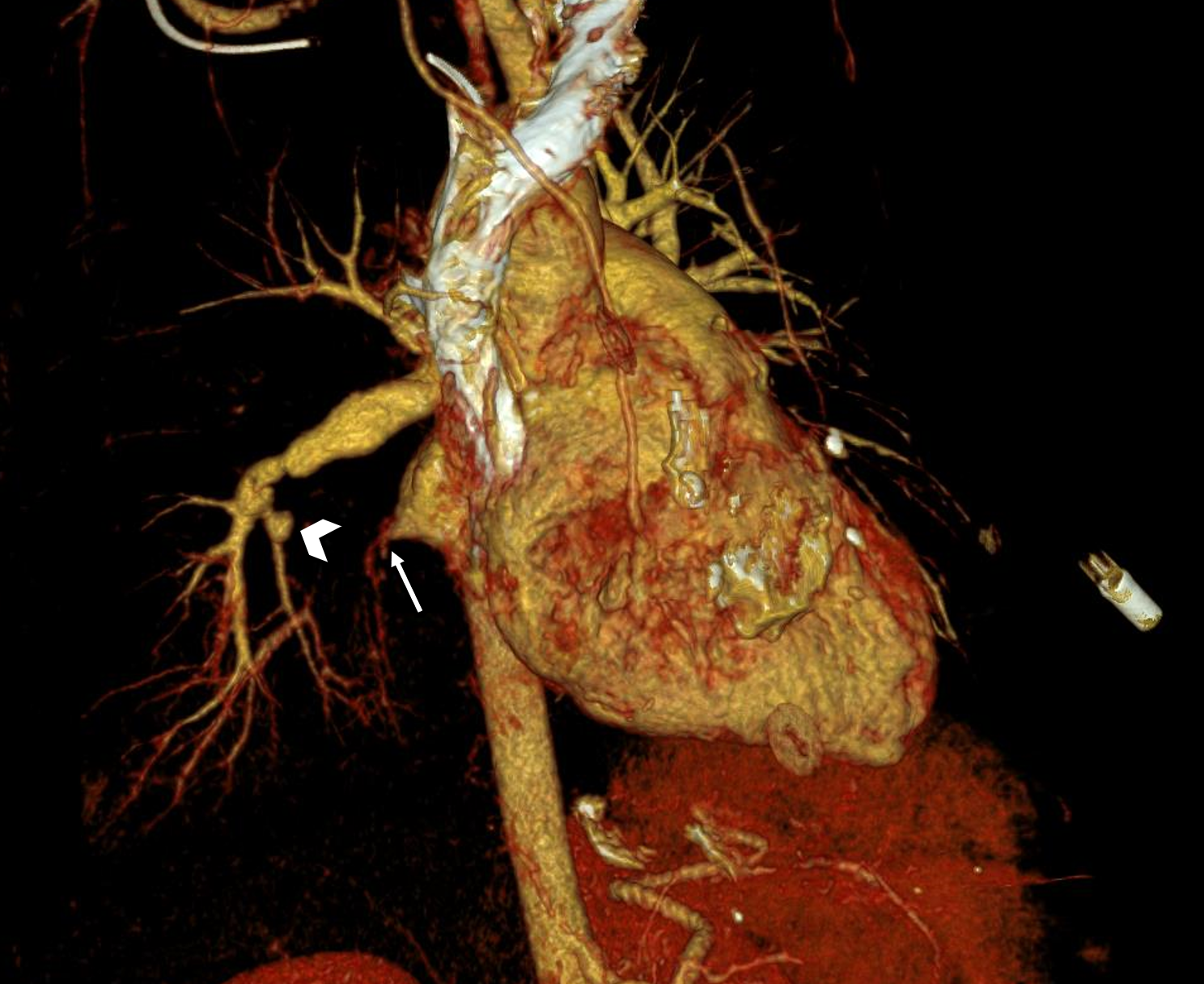