Oprisan A, Perez-Girbes A; Torregrosa Andres, A.

A 46-year-old man with no previous medical history was referred to our department due to increased liver function tests. Physical examination showed no abnormalities.

Abdominal ultrasound (US) showed a non-cirrhotic liver with moderate liver steatosis. There were no signs of portal hypertension. A focal liver lesion was found in right liver lobe. On US, the lesion was heterogeneous with two components: hyperechoic nodular area with partial shadowing and another hypoechoic area (Figure 1). The study was completed with hepatic MRI. At MRI, the lesion had polylobulated margins with a heterogeneous morphology, with macroscopic and intracellular fat component (Figure 2). Diffusion-weighted images demonstrated restricted diffusion at high b-value (b-800) with low values in ADC (Figure 3). After contrast administration, the fatty part of the lesion presented hyperenhancement in the late arterial phase with washout in the portal venous phase. The rest of the lesion demonstrated an intense enhancement in all acquired phases. Hepatobiliary phase image obtained 120´ after injection of contrast agent showed that the lesion did not retain contrast (Figure 4).

Hepatic angiomyolipoma (HAML) is a rare, benign, mesenchymal tumour, first described in the literature in 1976. It is composed of variable amounts of smooth muscle component, adipose tissue and proliferation of blood vessels.

HAML is usually asymptomatic, so its diagnosis is made frequently incidentally in imaging studies. When they present symptoms, this will depend on the size of the lesion, which can produce abdominal pain (related to tumour growth) and exceptionally rupture and haemorrhage. HAML can present both, sporadically and associated with renal angiomyolipomas in the context of tuberous sclerosis (5-15% of cases). It predominates in the female sex (4:1) and its aetiology is unknown. The suspected diagnosis can be radiological, depending on the size and the fat component of the lesion.

HAML presents as a well-circumscribed liver lesion. On US, it appears as a hyperechogenic, heterogeneous and well-defined single mass. After contrast-enhanced US, HAML demonstrates arterial hyperenhancement with persistence of enhancement at portal and delayed phases.

CT without contrast shows a lesion with heterogeneous attenuation values depending on the proportions of fat and soft tissue. After contrast administration, significant uptake of the non-fatty portion of the lesion in the arterial phase is normally observed; behaviour during portal venous phase is variable with some reports of persistent enhancing and other lesions demonstrating washout. Some HAMLs exhibit prominent tortuous vessels and early draining vein.

MRI is considered the best imaging technique to characterize the lesion and identify its fat component. Both macroscopic and microscopic fat can be detected with MRI using fat suppression and in-phase/out-of-phase sequences. In T1 and T2-weighted, foci of an increased signal can be observed because of the macroscopic fatty component of the tumour. Fat suppression sequences confirm the presence of macroscopic fat within the lesion. Decrease of signal in in-phase/out-of-phase sequences represented microscopic fat accumulation inside the lesion. Also, HAML with both fat components (mixed) can be detected.  Dynamic MRI shows a highly enhancing lesion in the arterial phase. During portal venous phase, HAMLs can demonstrate, both persistent enhancing or washout. Most HAMLs show homogeneous hypointensity at hepatobiliary phase. Due to its dynamic behaviour with arterial phase hyperenhancement and potentially washout, HAML is commonly misdiagnosed with hepatocellular carcinoma in imaging studies.

The patient underwent ultrasound-guided biopsy. Lesion and liver parenchyma were both biopsied. , Pathology examination provided a final diagnosis of hepatic angiomyolipoma. Hepatic parenchyma showed moderate steatosis without fibrosis Surveillance with imaging has been decided within the interdisciplinary committee.

HAML imaging appearance varies depending on the proportions of fat and soft tissue. Non-invasive diagnosis of HAML is difficult with most of them misdiagnosed prior to pathological examination. Radiologists should consider HAML diagnosis in hypervascular fat-containing lesions with prominent vessels. 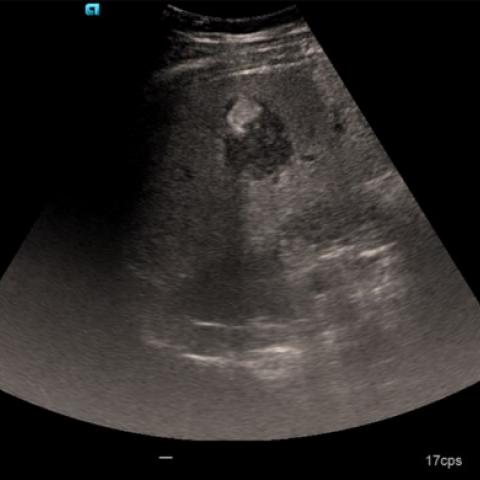 B-mode US images of the liver show an heterogeneous focal liver lesion composed of hyperechogenic nodule with partial shadowing and hypoechoic area. Note surrounding liver parenchyma is echogenic due to moderate steatosis 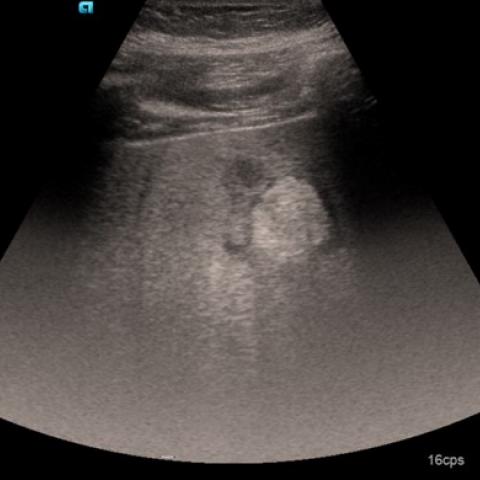 B-mode US images of the liver show an heterogeneous focal liver lesion composed of hyperechogenic nodule with partial shadowing and hypoechoic area. Note surrounding liver parenchyma is echogenic due to moderate steatosis.
Figure 2 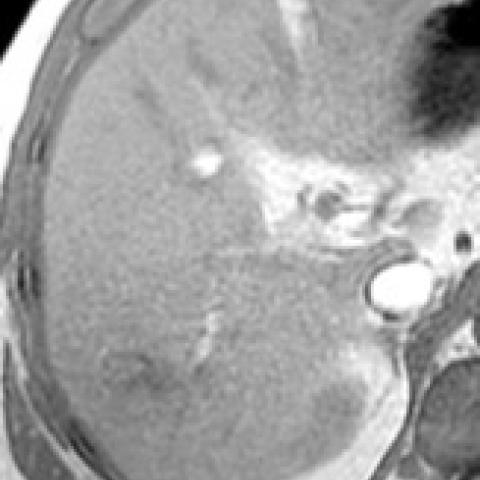 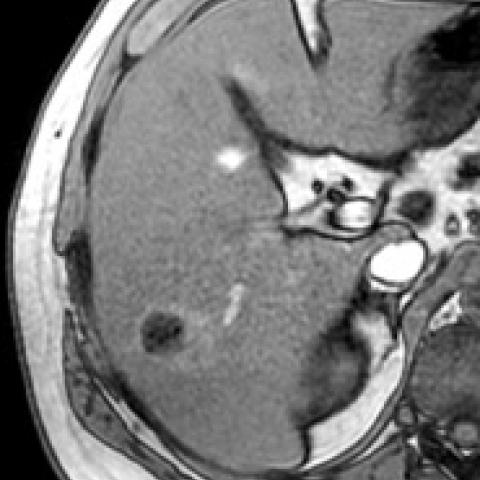 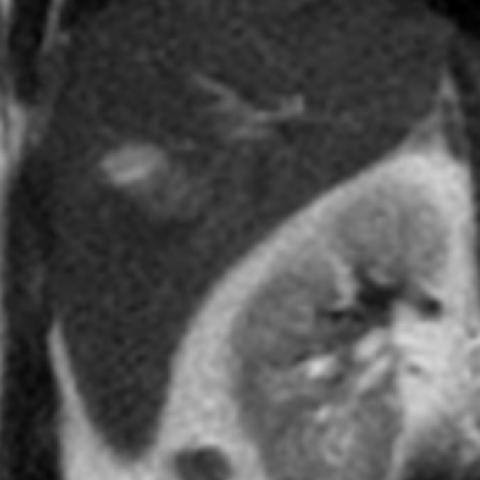 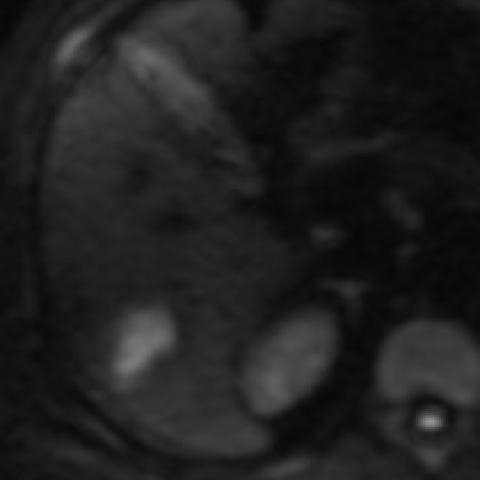 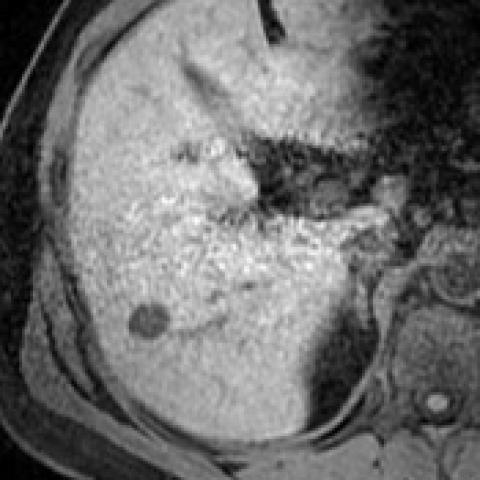 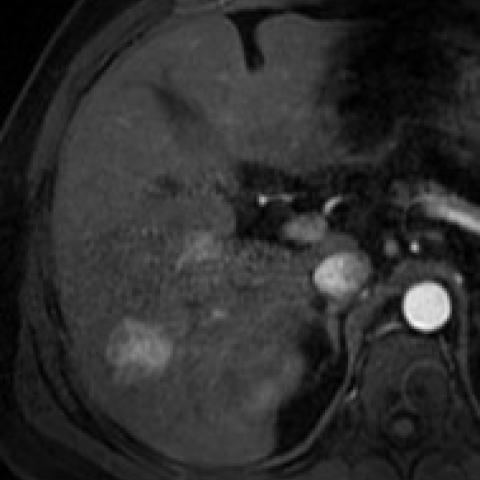 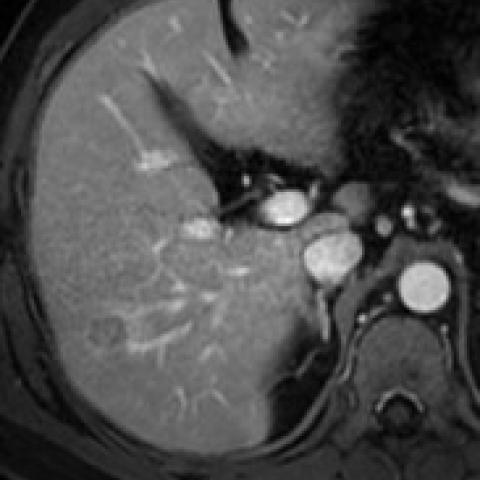 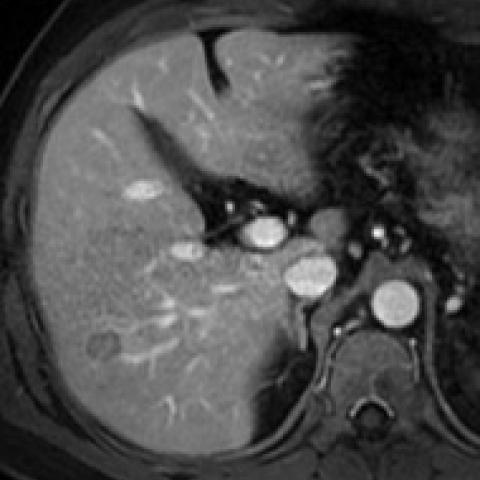 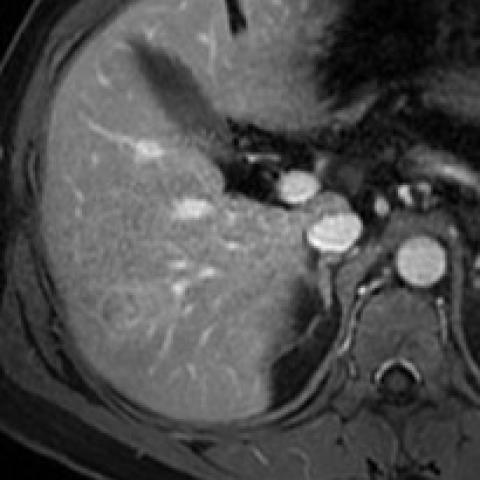 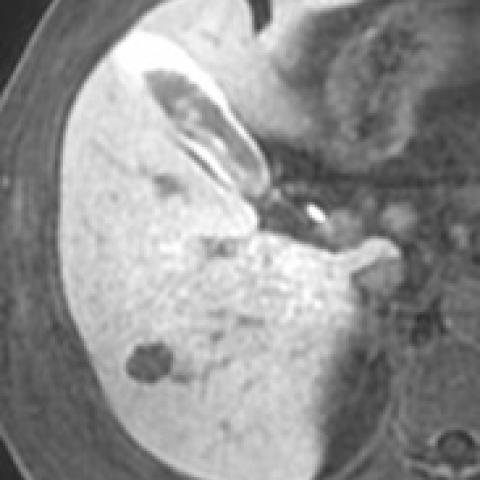 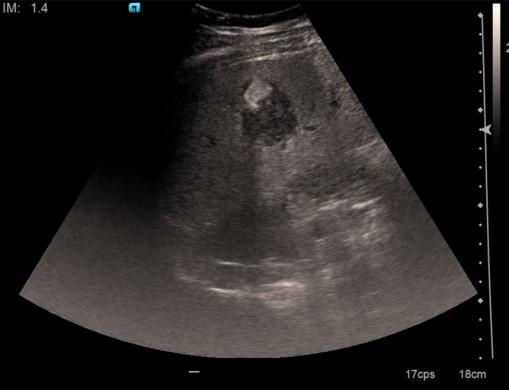 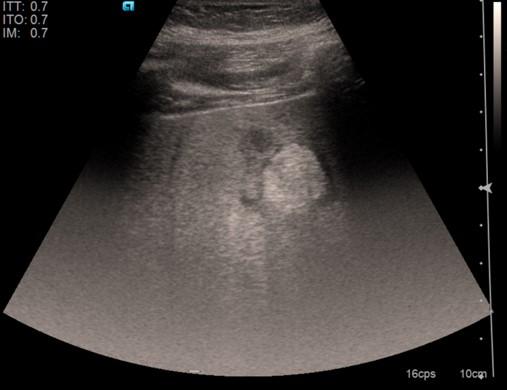 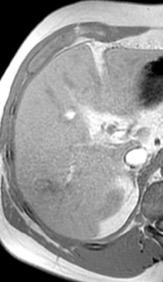 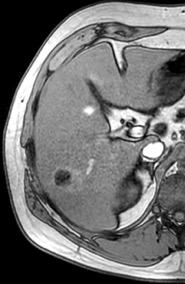 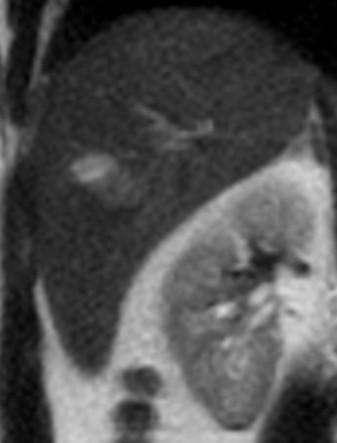 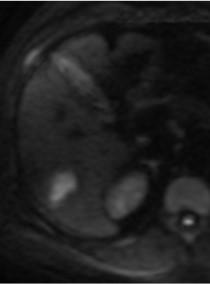 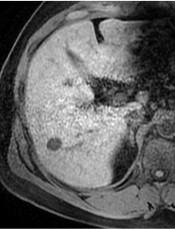 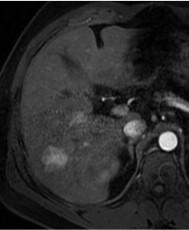 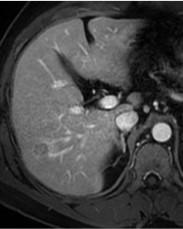 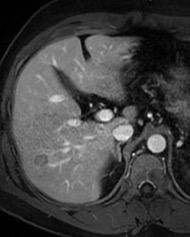 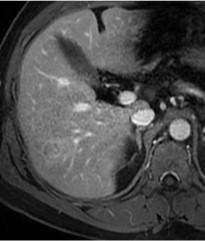 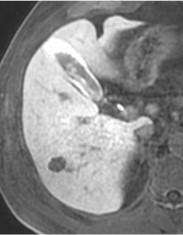