CT and MRI were obtained for diagnosis. Sagittal bone window CT of the pelvis (figure 1) demonstrates a transverse fracture through the S4 vertebral body and posterior elements (white arrow), with a mild retrolisthesis of the upper fragment.

Transverse sacral fractures [TSF} are uncommon. They constitute up to 5% of sacral fractures, and they usually occur in young adults. A fall landing on the buttocks causes 35% of them, with 37% caused by motor vehicle accidents.

TSF can be categorized in high and low fractures, with both having a horizontal plane separation and two sacral fragments. The Denis classification of sacral fractures includes them in the zone III fractures. Nevertheless, many transverse sacral fractures affect the three zones described. They were later classified into four categories by Camille et al., but only including transverse high sacral fractures. They can be associated with thoracolumbar burst fractures.

Low transverse sacral fractures are mainly due to a direct impact against the coccyx or a direct hit to the lower sacral segments. The mechanism involved is a levering action through the distal sacrum, below the sacroiliac joints' level of fixation. Any of the three last sacral vertebrae may be affected. They are usually stable fractures.

A sacral fracture should always be suspected after trauma with resulting sacrococcygeal pain or a pelvic ring fracture with neurological deficits.

In general, sacral fractures may be hard to identify on conventional radiology due to the overlying bowel gas, the bladder silhouette, and the normal angulation of the sacrum. TSF fractures are best seen in a lateral sacrum view, although an anteroposterior radiograph could show a step ladder by displacement and overriding of the sacral fragments.

CT and MRI have a higher sensitivity for transverse sacral fractures than conventional radiology. Besides the sacral horizontal fracture, cancellous bone marrow oedema, and paravertebral soft tissue oedema may be seen [2]. It is essential to describe if there is any displacement of the sacral fragments and sacral canal stenosis.

Management and treatment will depend on the patient's neurological status and the stability of the fracture. A fracture displacement of 1 cm or more is considered to be unstable. Low transverse sacral fractures usually don't need to be stabilized [1].

Written informed patient consent for publication has been obtained.' 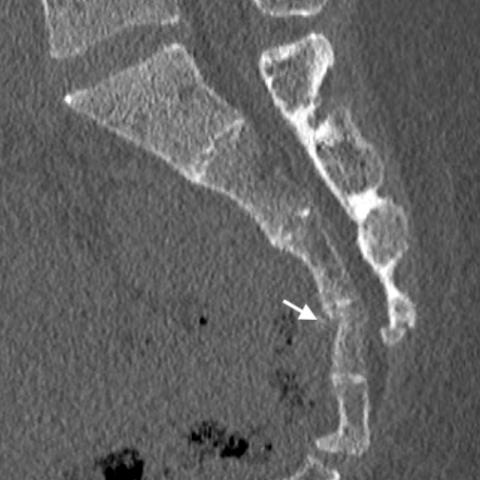 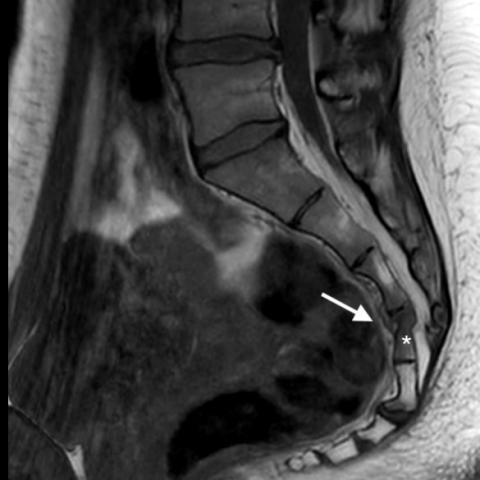 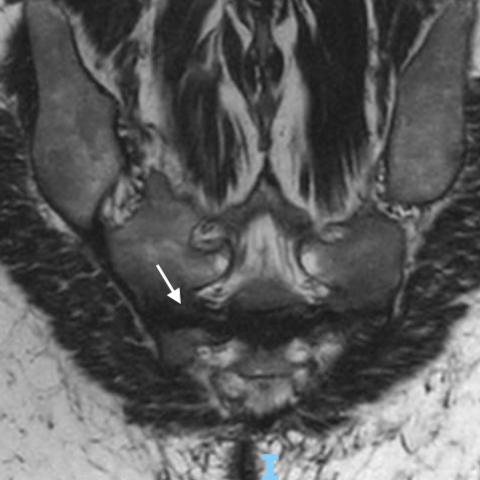 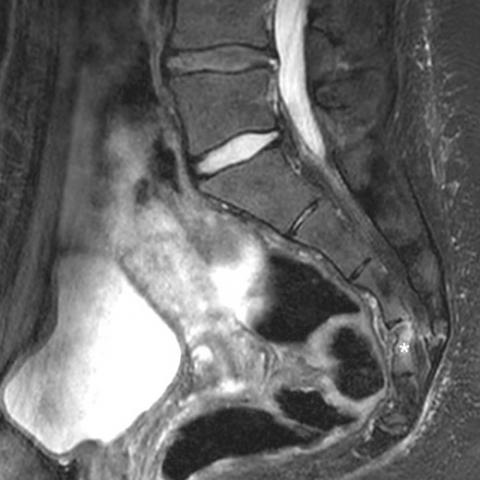 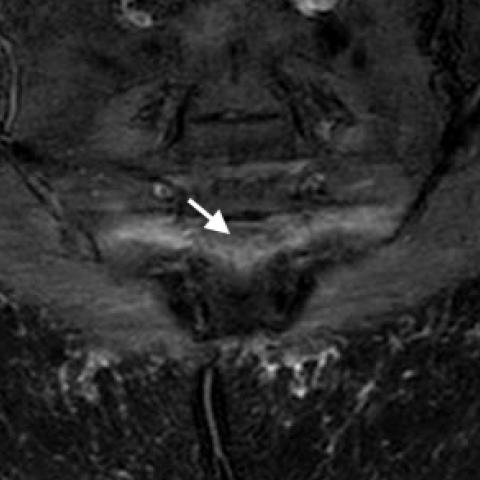 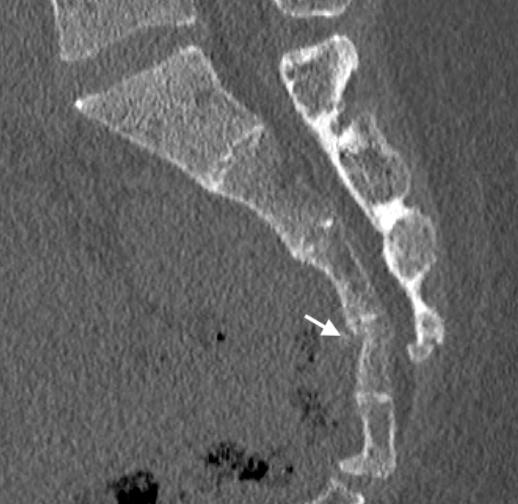 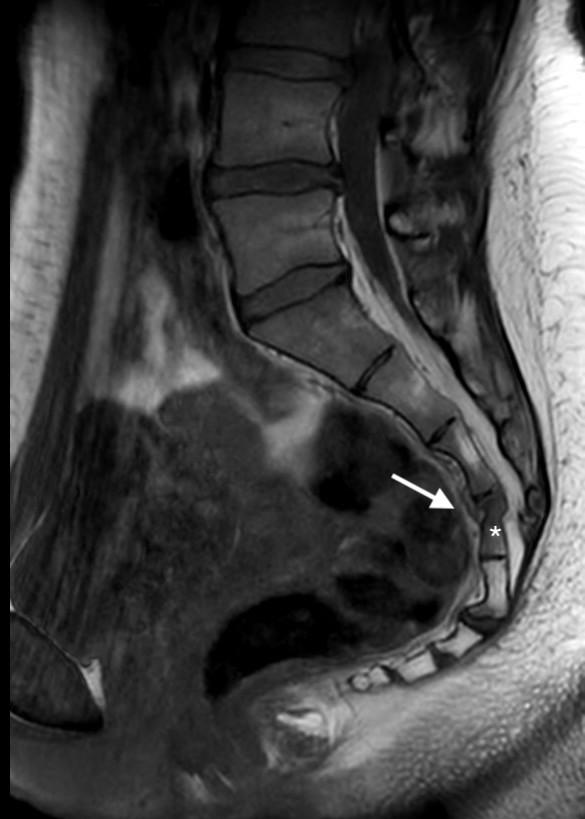 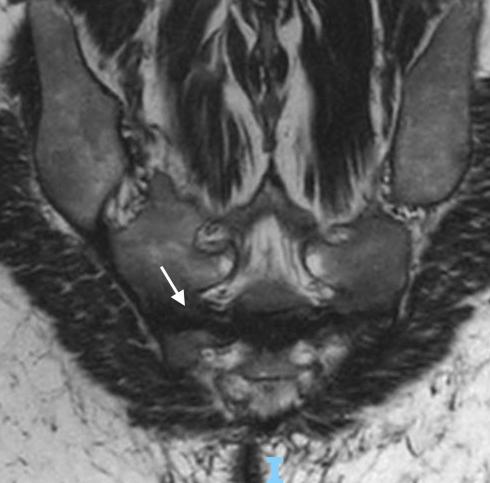 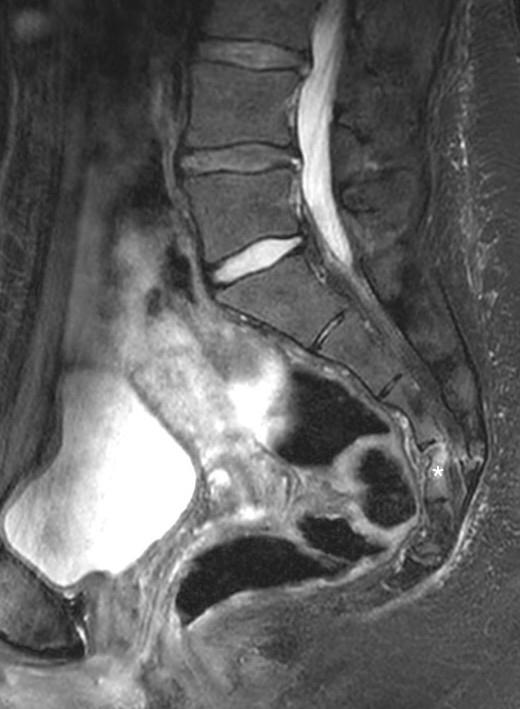 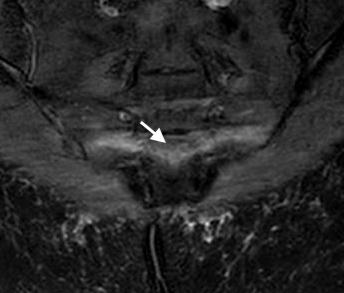