A 23-year-old female under evaluation for chronic anaemia with no evidence of gastrointestinal blood loss like melena or hematochezia. Routine blood workup revealed iron deficiency anaemia and both upper and gastroscopy of the lower intestine were negative. Stool occult blood was occasionally positive.

Chronic anaemia requiring blood transfusions without other abdominal symptoms in a young female is most commonly due to menorrhagia, with other causes being malabsorption, pregnancy, gastrointestinal malignancy and peptic ulcer disease. Intestinal vascular malformations (IVM) remain an uncommon cause of anaemia with reported incidences of 1 in 10,000 individuals and hence remain undiagnosed especially if they are not picked up on endoscopy [1].

IVM can be classified on the basis of flow dynamics into high flow and low flow with arteriovenous malformations and arteriovenous fistulas belonging to the former and venous, lymphatic, capillary, capillary-venous, and capillary-lymphatic-venous belonging to the latter [2]. Presence of intramuscular/subcutaneous lesions favour hemangiomas/angiomas which are more commonly encountered in adults [3]. IVM is often associated with other vascular pathologies like aortic sclerosis, aortic stenosis and aortic aneurysm [4].

IVM presents clinically in the form of chronic gastrointestinal bleed which may manifest as anaemia or malena depending on the location and chronicity of the bleed requiring parenteral transfusion in severe cases. The gold standard for the examination of entire small bowel is intraoperative enteroscopy but in up to 5 % cases, the source of bleed may be missed clinically in which case it is called as an obscure gastrointestinal bleed [5]. Purely lymphatic lesions like intestinal lymphangiectasia occurs in a younger age group presenting with symptoms of malabsorption and pitting pedal oedema [6]. Capsule endoscopy may be done preoperatively especially in children. However, the role of radiologists becomes important when intramural pathologies are encountered.

Ultrasound examination can detect anechoic cystic areas within the wall of small bowel which may show pseudo-flow artefact due to motion of fluid within which can be used to differentiate from hypoechoic solid lesions [7].  Typical CT findings include long segment bowel wall thickening with arterial feeders/nidus seen in cases of arteriovenous malformations. MRI findings include presence of multiple well defined cystic areas within the wall of bowel. Adjacent prominent veins may be noted.  The patient was taken up for focal ileal resection following which she had no further episodes of bleeding.

Segmental bowel wall thickening may have multiple classic differentials including inflammatory causes like Crohn’s disease, granulomatous diseases like tuberculosis, intestinal ischemia, neoplasms like lymphoma but presence of multiple subserosal cystic areas in the setting of chronic anaemia and gastrointestinal blood loss, favours Intestinal venolymphatic malformation which is a rare cause of gastrointestinal bleed. 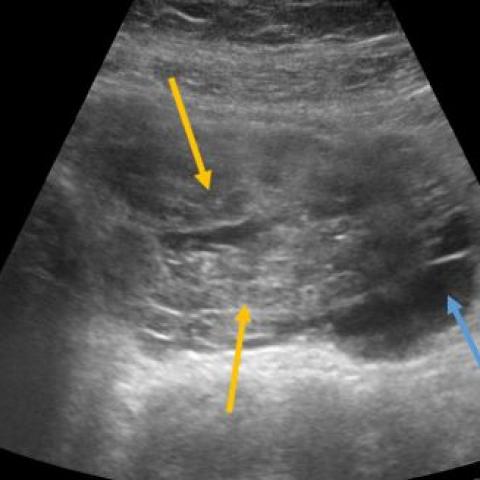 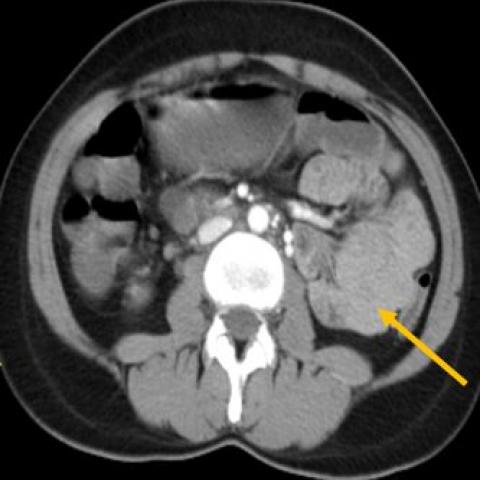 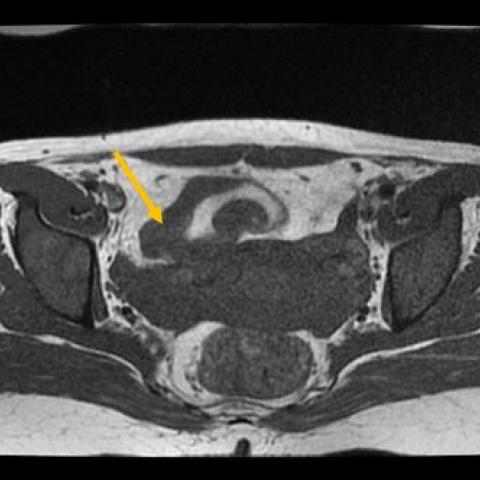 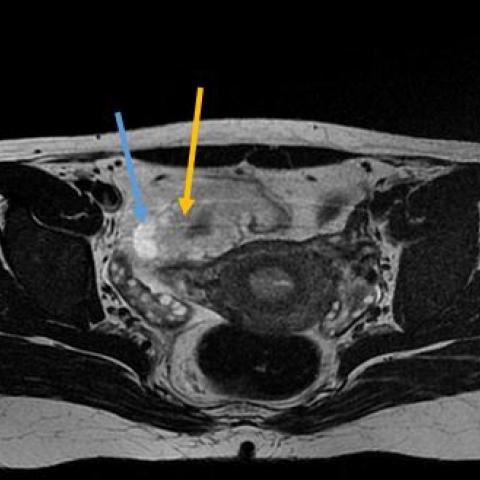 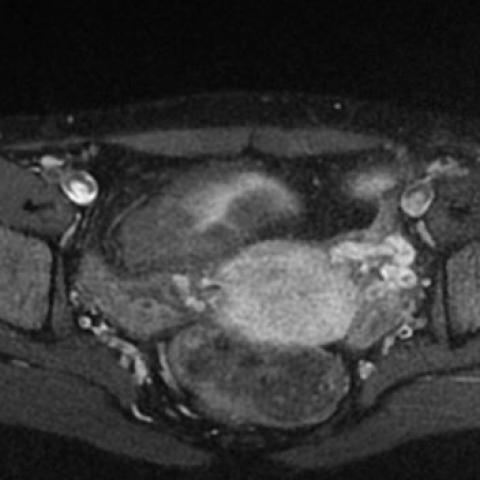 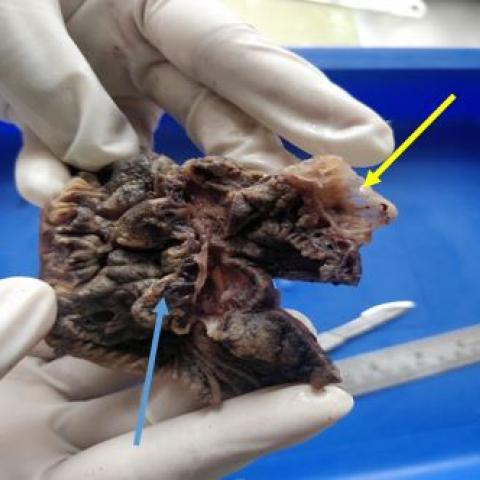 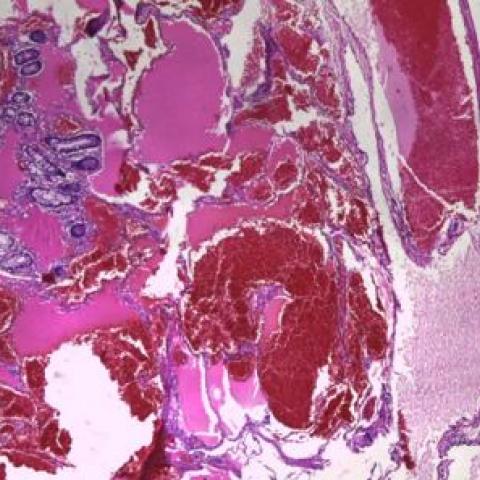 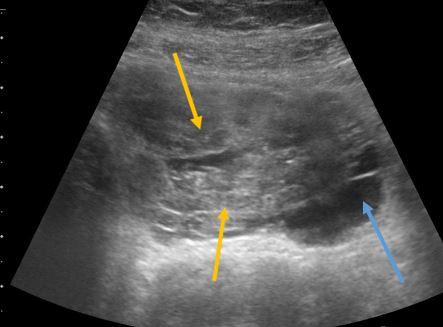 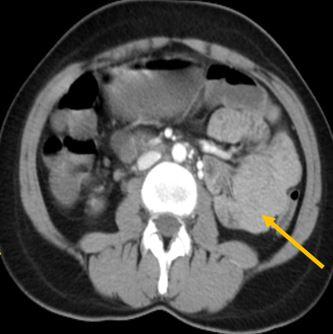 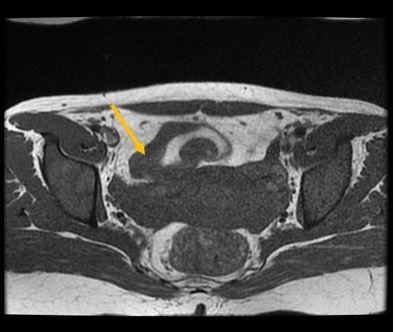 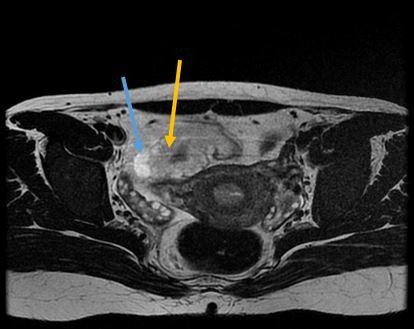 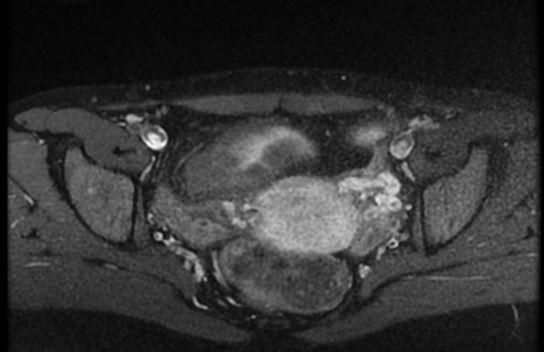 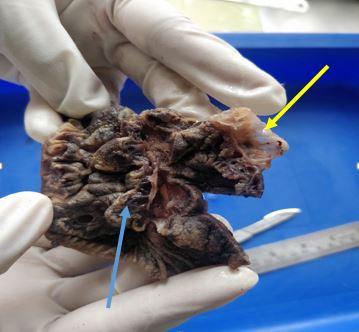 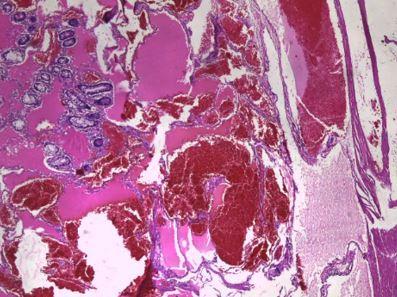