An unconscious 95-years-old female was admitted to emergency department from a nursing home. The leading symptom was vomiting which began the same day. The nurses also reported a ventral hernia and shortness of breath. The patient’s status had progressively worsened. Past medical history was not significant.

The chest and abdominal x-ray showed no radiological signs of ileus or pneumoperitoneum. Unenhanced and contrast-enhanced CT were performed. A ventral, supraumbilical hernia containing the caudal gastric parts and intraperitoneal (superior) part of duodenum was shown (Figure 1). The gastric wall was hypovascular and thickened in oral parts, i.e. corpus and fundus (Figure 2), while the herniated gastric and duodenal parts were of normal wall thickness and postcontrast opacification. Along the major curvature of the stomach, intramural gas and gas bubbles in mural gastric veins were seen (Figure 2), with gas propagation into the intrahepatal portal veins branches of liver segments IV and VIII (Figures 3 and 4). The periportal edema was developed at the hepatic hilar region. Imaging findings were indicative of gastric ischaemia due to strangulated hernia with signs of gastric emphysema. The follow-up CT after conservative treatment confirmed resolution of the gas in gastric wall and veins as well as in portal vein system. Normal contrast enhancement of gastric wall was also restored (Figures 5 and 6).

Gastric emphysema or gastric cystic pneumatosis is a rare radiological finding and it was first described by Brouardel in 1895 and only 42 cases have been described in the literature. [1]. According to literature, gastric wall is the least common location for pneumatosis in the gastrointestinal tract [2]. The aetiology can be gastric (infectious or ischaemic) and extragastric (extension of air into the gastric wall from distant sites such as small bowel or colon) [3].

Imaging is essential to determine the presence of gas in the gastric wall and the underlying cause, especially to differentiate gastric emphysema from infectious emphysematous gastritis [1]. The latter is a potentially life-threatening acute condition, while the former is more benign. These two conditions can mimic each other, but can be distinguished based on the predisposing factors, clinical presentation and radiological findings. In gastric pneumatosis, gas is not produced in the gastric wall itself, but dissects the wall from more distant site, as in gastric outlet obstruction, iatrogenic air insufflation and mucosal damage, severe vomiting, dissection of air from the mediastinum (pneumothorax, ruptured bullae) and ischaemic changes of gastrointestinal tract [1,4]. Clinical presentation is usually mild with resolution of symptoms and findings after causative treatment. Radiologically, stomach often appears distended and thin-walled with linear gas lucency, usually posteriorly in the fundus [1]. On the other hand, infective emphysematous gastritis is caused by diffuse infiltration of the gastric wall by pathogenic gas-forming bacteria spreading into deeper tissue layers. Underlying causes include wall damage by toxic or corrosive substances, alcohol abuse, trauma, diabetes, gastric infarction, ulcer disease and necrotising enterocolitis. The clinical presentation is severe and the course is often fulminant, with poor prognosis due to systemic toxicity. Stomach is often contracted and gas pattern has a mottled or bubbly radiographic appearance. Submucosal blebs can cause cobblestone appearance on contrast studies [1,4].

Contrast-enhanced CT of the abdomen is the method of choice, with the presence of intramural or intravascular gas as well as lack of postcontrast wall enhancement as pathognomonic radiological signs of ischaemic changes [2].

Depending on imaging and clinical findings, surgical or conservative treatment can be considered, directed to underlying aetiology. While the prognosis of gastric emphysema is excellent, outcome of emphysematous gastritis is often poor [1,2].

Imaging of patient with vomiting and abdominal pain is often crucial to identify pathological substrate as clinical findings are rarely specific. When intramural gas in gastric wall is detected, gastric pneumatosis needs to be differentiated from infective emphysematous gastritis. Thin intramural gas lucency in posterior fundus of the distended stomach suggests diagnosis of gastric pneumatosis. The lack of predisposing factors, clinical presentation and identification of underlying cause (incarcerated hernia) further substantiate the final diagnosis of gastric pneumatosis. The presence of gas in gastric veins and portal venous system can be seen both in emphysematous gastritis and in gastric pneumatosis as it is a sign of ischaemic aetiology [1,4-6]. Thus, it can’t be used to differentiate between the two conditions. In conclusion, it is crucial to consider all available clinical data when writing a radiological report. 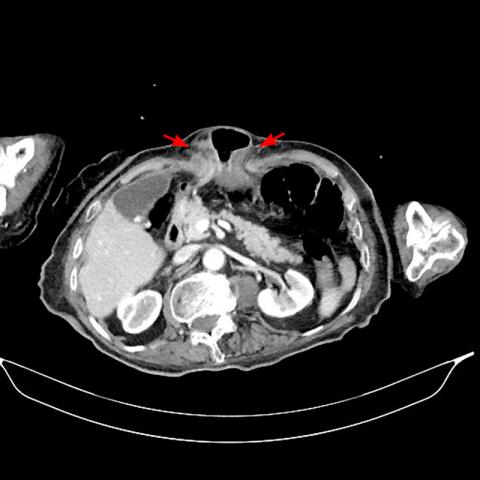 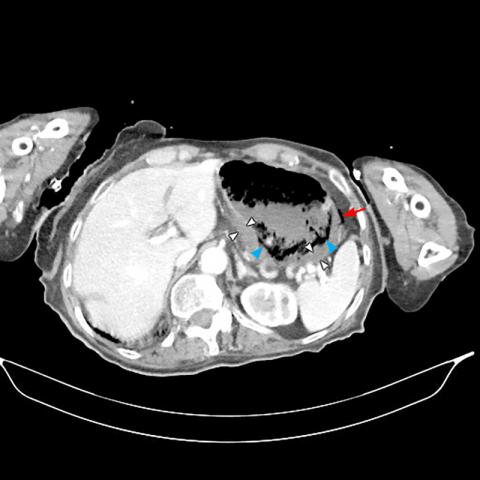 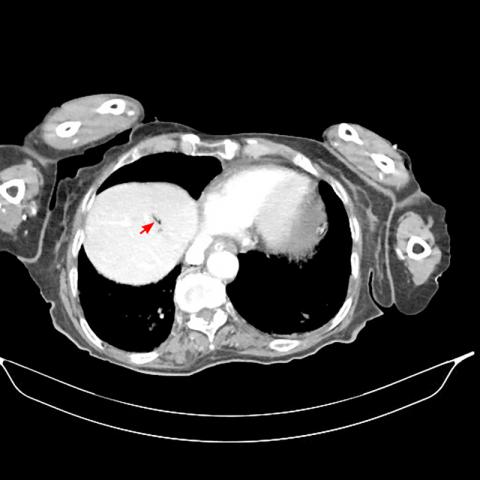 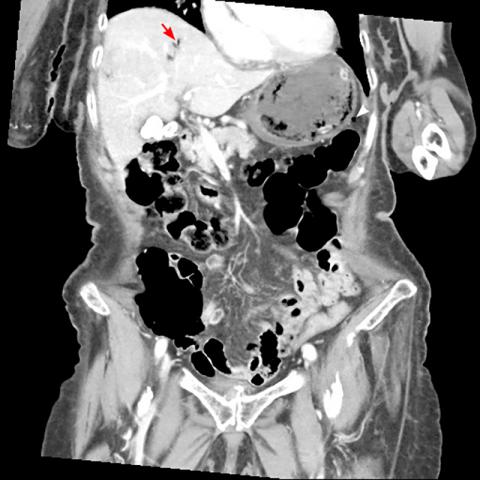 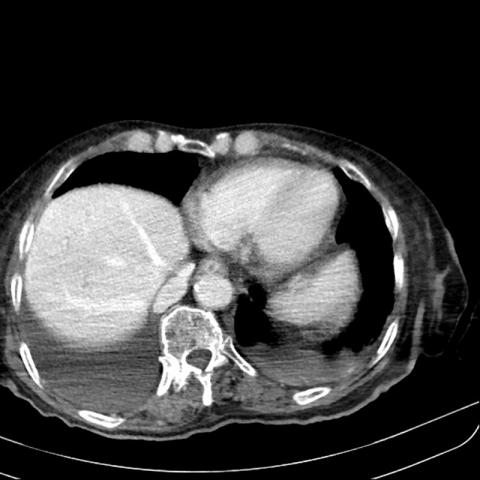 A follow-up axial contrast-enhanced CT at the same level as in Figure 3, revealing resolution of gas in portal venous system.
Figure 6 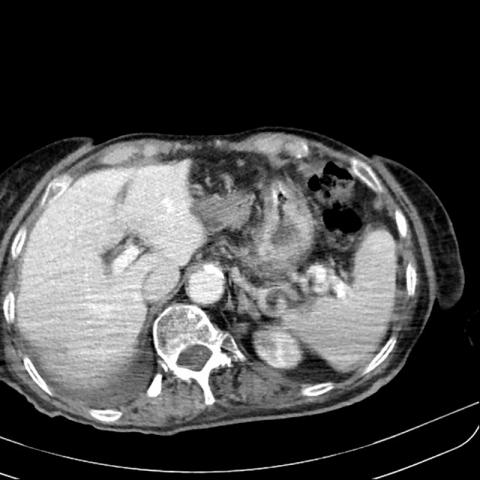 A follow-up axial contrast-enhanced CT revealing resolution of gas in gastric veins, as well as postcontrast enhancement of gastric wall 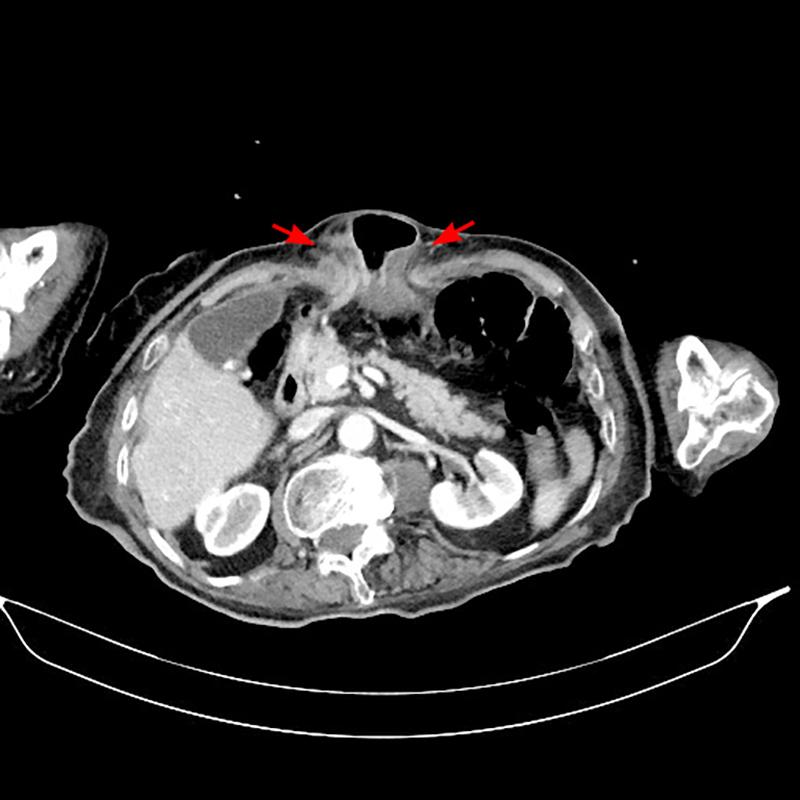 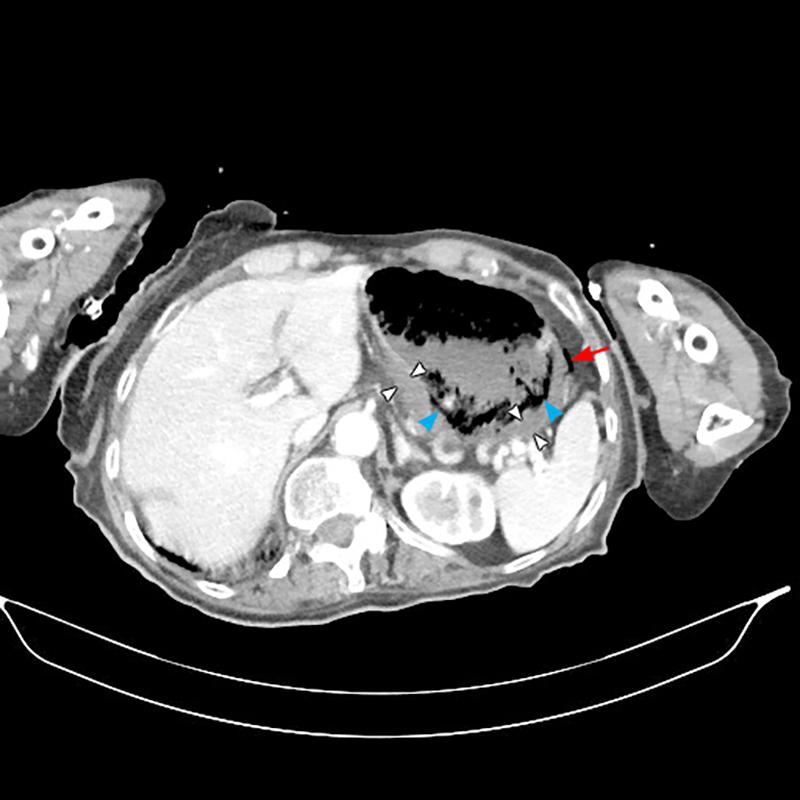 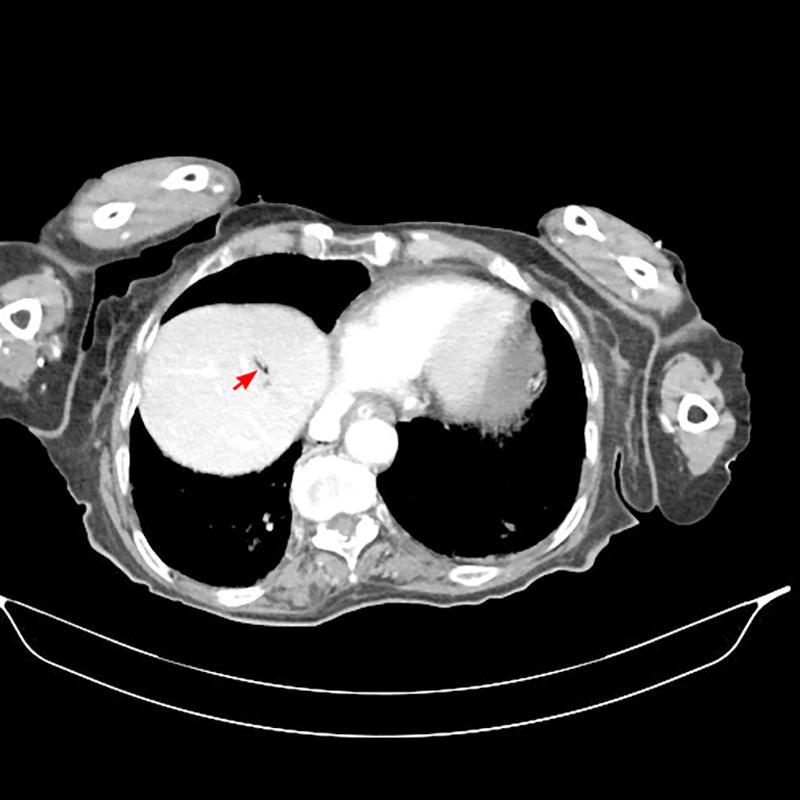 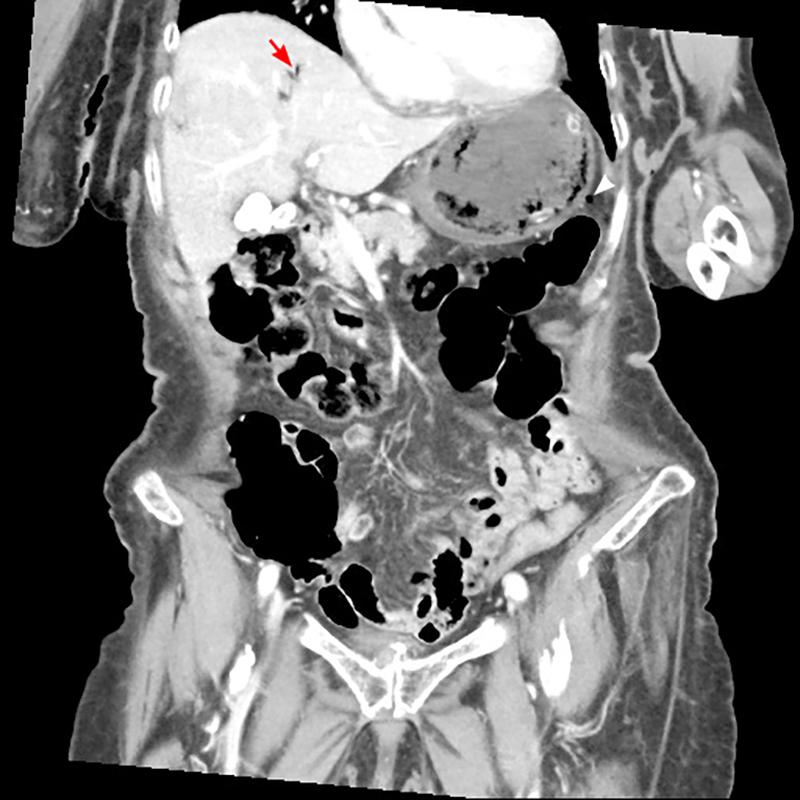 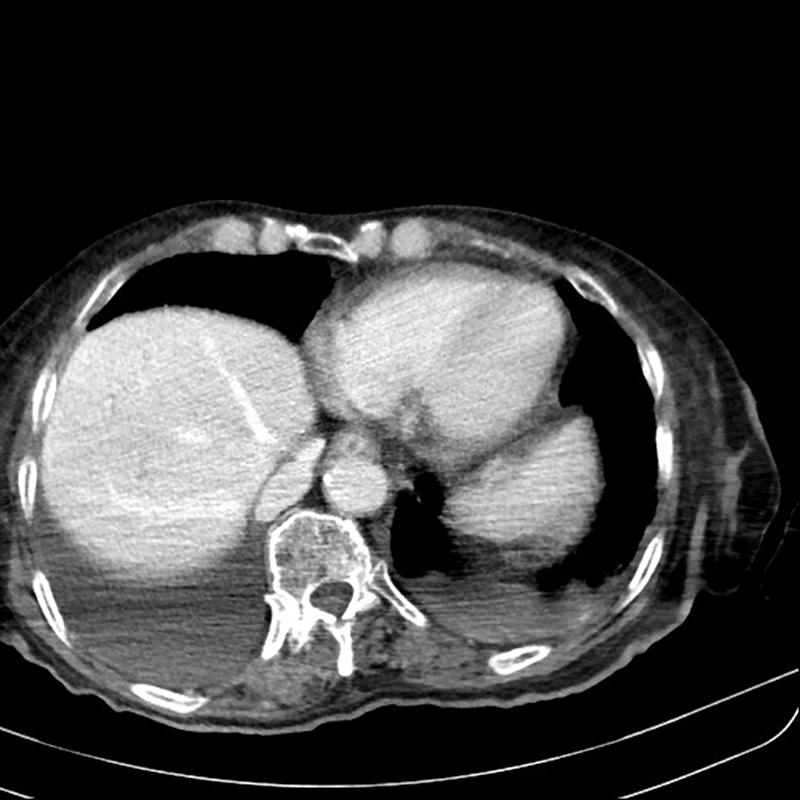 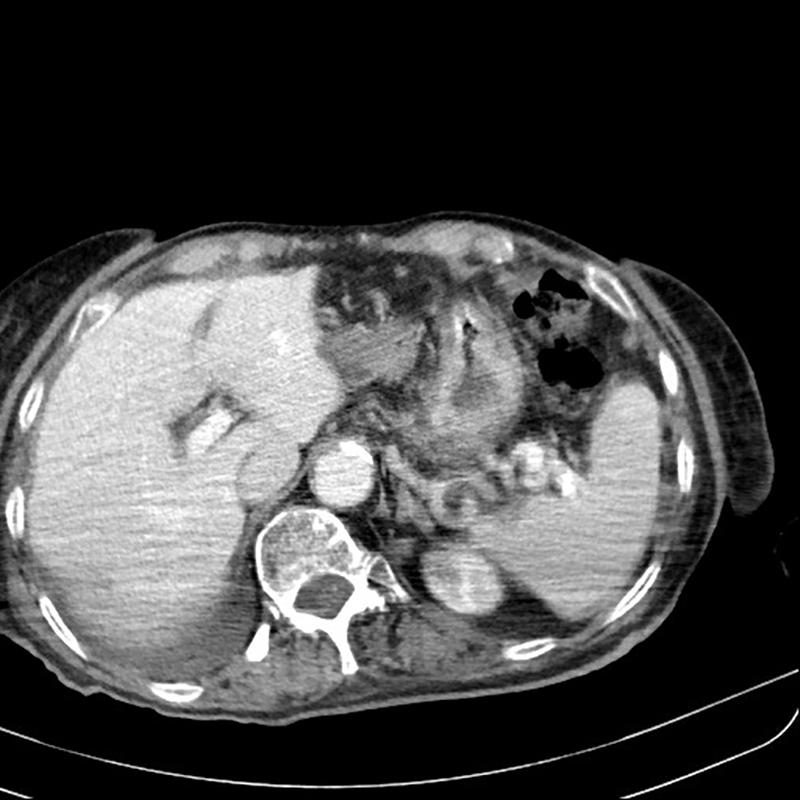