A 61-year-old male with history of stage IV lung adenocarcinoma treated with chemotherapy and immunotherapy, who developed panhypopituitarism due to pembrolizumab hypophysitis treated with corticosteroids substitutive treatment. He came to our radiology department with headache and diplopia for 4 days. Hypophysitis recurrence was the clinical suspicion. Contrast-enhanced cranial CT was performed.

MRI was performed to complete the study. A heterogeneous mass enlarging the anterior part of the pituitary gland was discovered. It measured approximately 23 x 18 x 28 mm in size. The lesion displayed ill-defined borders and heterogeneous signal in T1WI and T2WI sequences. A hyperintense focus in T1WI may indicate intralesional haemorrhage. It extended towards both cavernous sinuses, the tuberculum sellae and the suprasellar region, compressing the pituitary stalk and the optic chiasm. After contrast administration, the mass showed heterogeneous avid enhancement with patchy intralesional non-enhancing areas, probably related to areas of cystic/necrotic degeneration. No increased signal of the posterior pituitary gland was appreciated.

Transsphenoidal biopsy of the sellar region was performed.

Pituitary metastasis of lung adenocarcinoma was the diagnosis.

Pituitary metastasis (PM) is a rare complication of advanced malignancy, first reported in 1857 by L. Benjamin. Pituitary gland metastases account for only 1% of all operated pituitary masses and <1% of all intracranial metastatic lesions. Mean age of diagnosis is 60 years, and male-to-female distribution is similar. Lung cancer is the most frequent primary cancer in males and breast cancer in women, although almost every cancer type may metastasize to the pituitary gland[1]. Metastases occur more frequently in the posterior pituitary gland than in the anterior pituitary gland, since the first location receives direct arterial blood supply from hypophyseal arteries and has a larger contact area with dura mater.

Most patients are asymptomatic and are discovered in autopsies. Characteristic symptoms are reported in <20% of the cases. During the last decades, the improvement of neuroimaging techniques and increased of survival in cancer patients has led to the diagnosis of more cases and symptoms. Approximately 50% of the cases present with diabetes insipidus [2]. Other symptoms include visual damage (30%), ophthalmoplegia (25%), headache (20%), fatigue, weight loss, nausea, vomiting and cognitive deterioration (5-10%). Anterior pituitary deficiency is reported in 25-45% of the cases. Hyperprolactinemia is depicted in 80% of patients with PM and symptoms.

Radiological findings are non-specific. MRI is the modality of choice to evaluate a sellar mass. Findings include an ill-defined heterogeneous intrasellar mass, with variable signal in T1WI & T2WI, restricted diffusion, heterogeneous avid contrast enhancement and adjacent structures invasion. Sometimes it may appear as dumbbell-shaped tumour owing to indentation of the diaphragm sellae. Heterogeneous avid enhancement, restricted diffusion and adjacent structures invasion help to differentiate this entity from hypophysitis or pituitary apoplexy. In our case, previous cranial CT showed pituitary gland enlargement with homogeneous avid enhancement and no invasion signs; features compatible with hypophysitis.

Treatment, mostly palliative, depends on symptoms and on the primary lesion. Local radiation, chemotherapy and surgical treatment are available for palliative treatment. Complete surgical resection of PM is usually impossible because metastases are usually diffuse and invasive, but surgery is indicated when chiasmal damage and visual deterioration are present. Stereotactic sellar radiosurgery is also an effective, non-invasive, and safe method of ameliorating the compressive symptoms of PM. 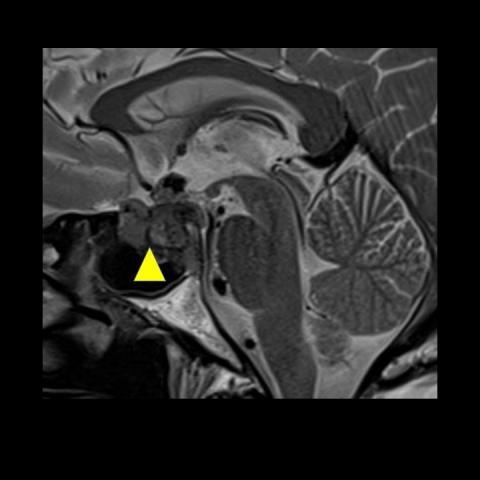 T2WI. Sagittal projection. An ill-defined mass of 23 x 18 x 28 mm was discovered in the sellar region. It showed heterogeneous intensity in T2WI with areas of low signal (arrowhead). It extended towards the tuberculum sellae and the suprasellar region, compressing both the pituitary stalk and the optic chiasm.
Figure 2 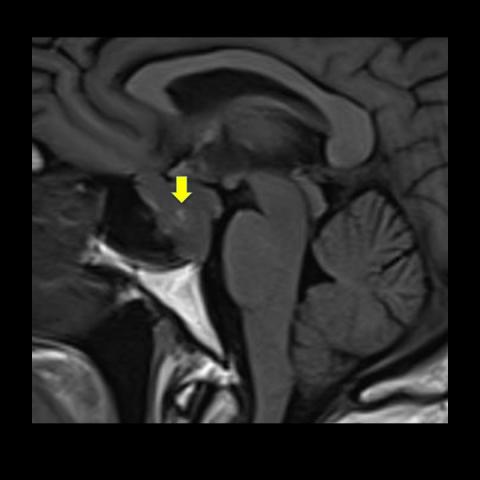 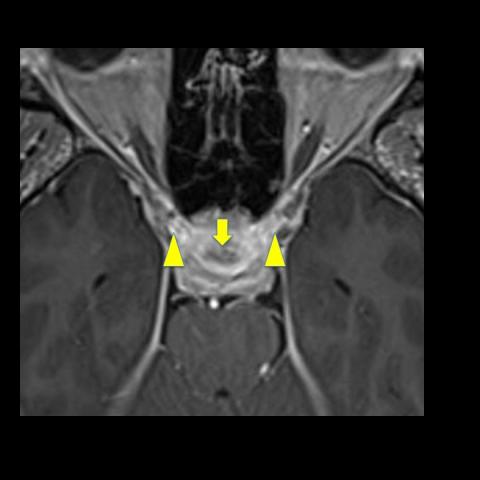 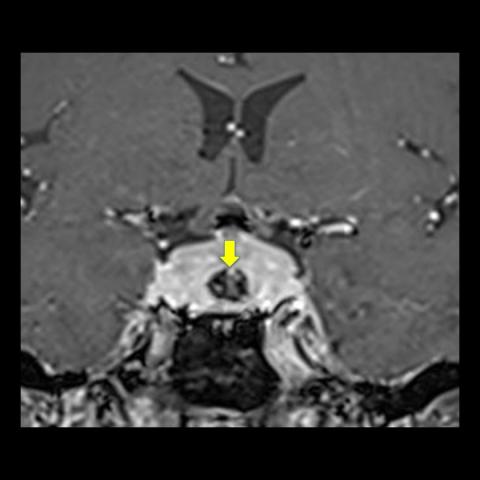 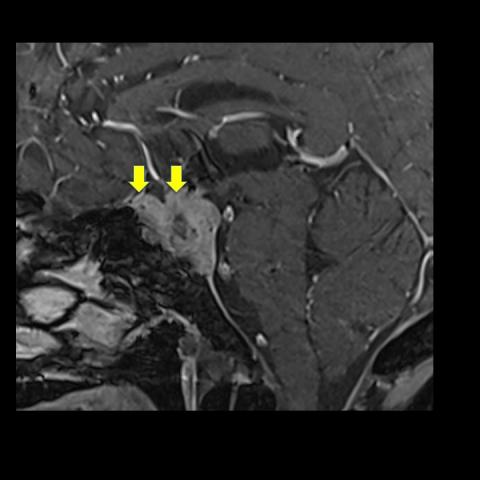 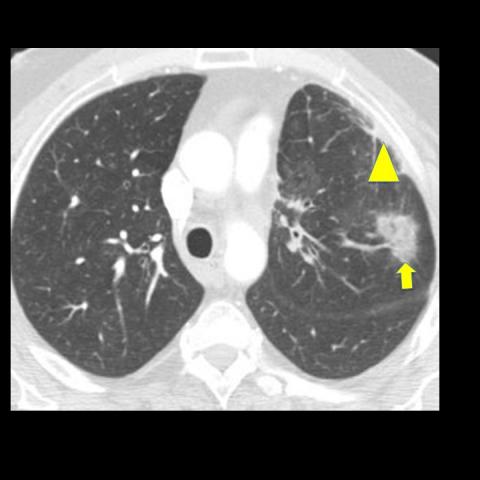 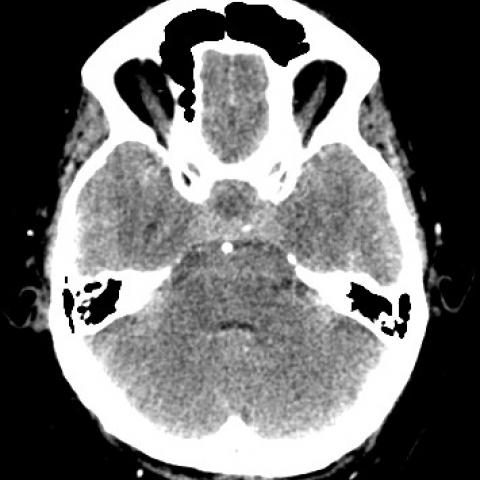 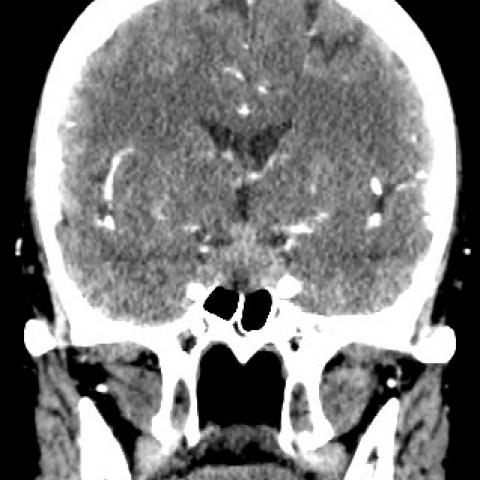 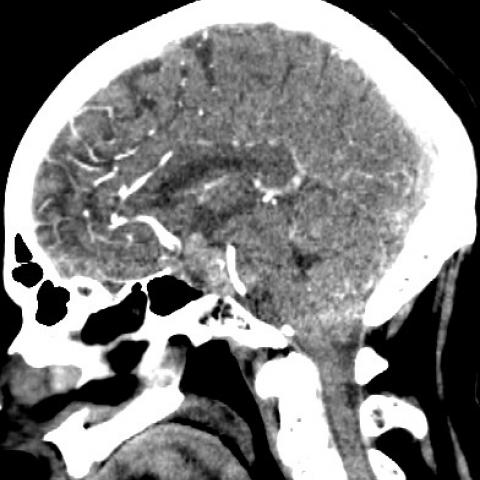 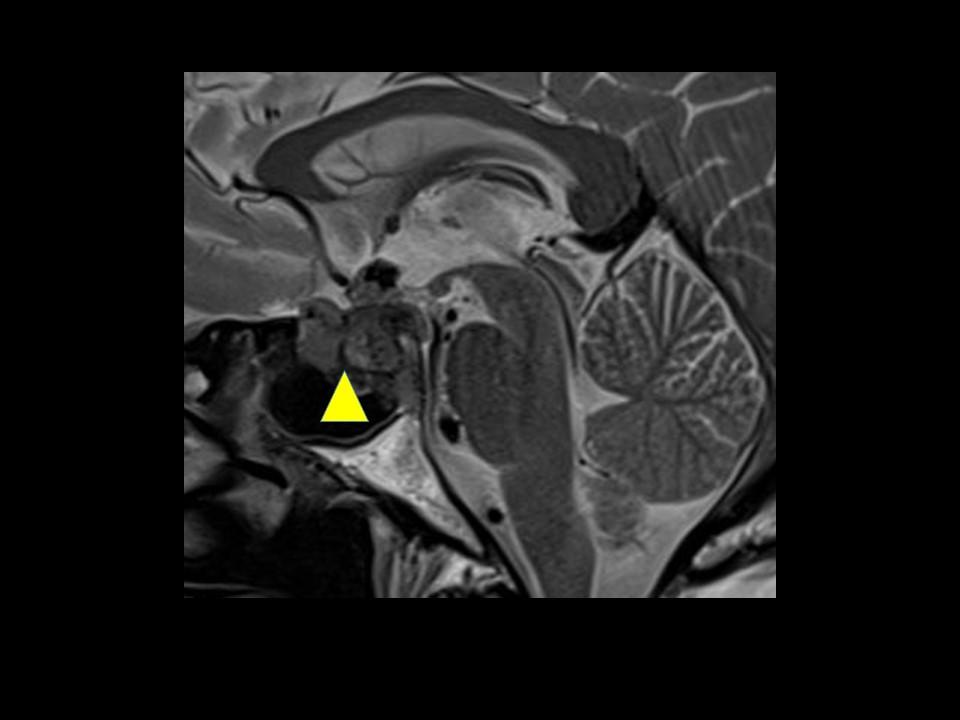 T2WI. Sagittal projection. An ill-defined mass of 23 x 18 x 28 mm was discovered in the sellar region. It showed heterogeneous intensity in T2WI with areas of low signal (arrowhead). It extended towards the tuberculum sellae and the suprasellar region, compressing both the pituitary stalk and the optic chiasm.
© Department of Radiology. Complejo Hospitalario de Navarra, Pamplona, Spain, 2020. 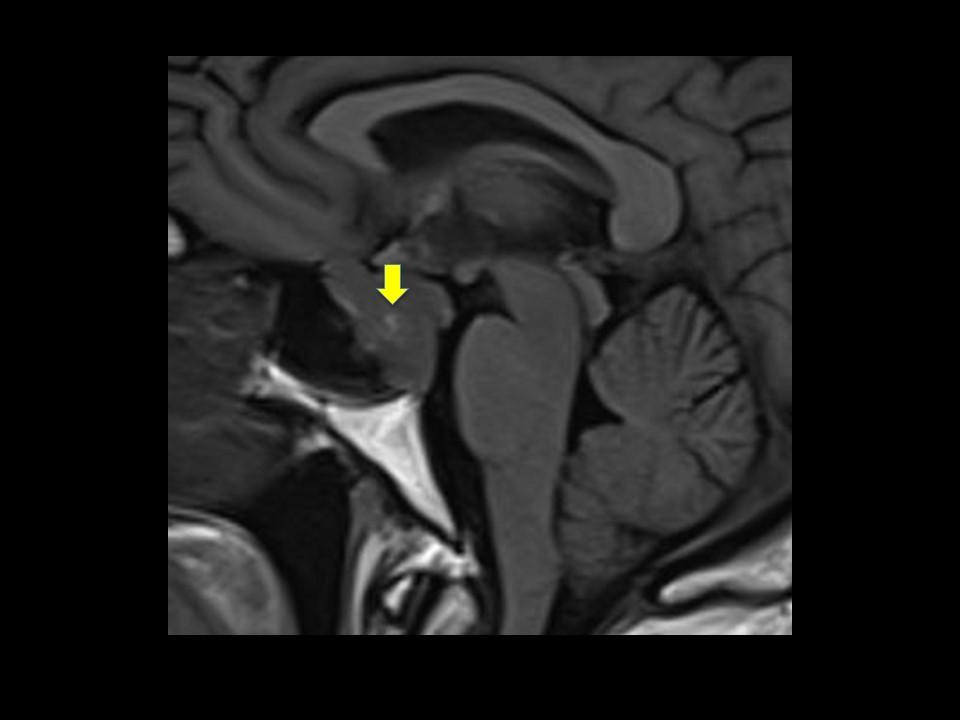 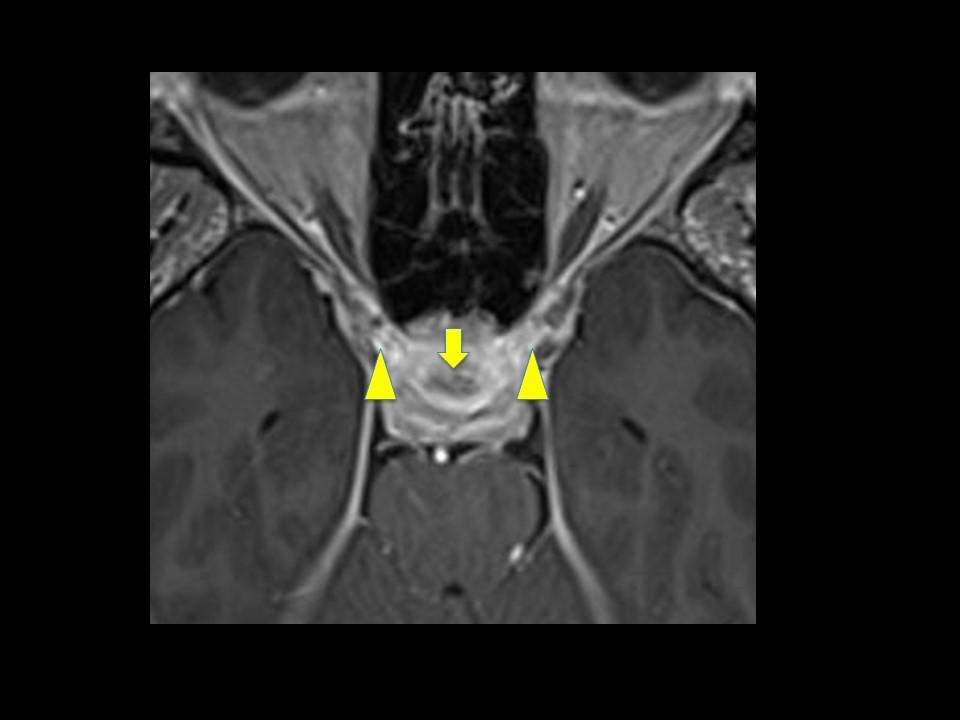 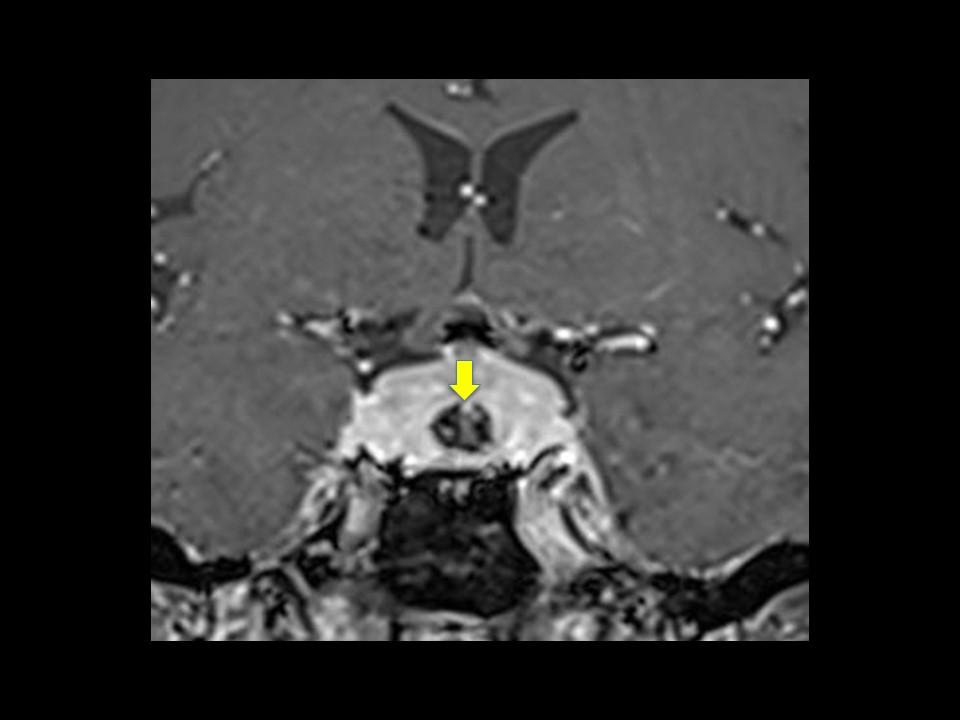 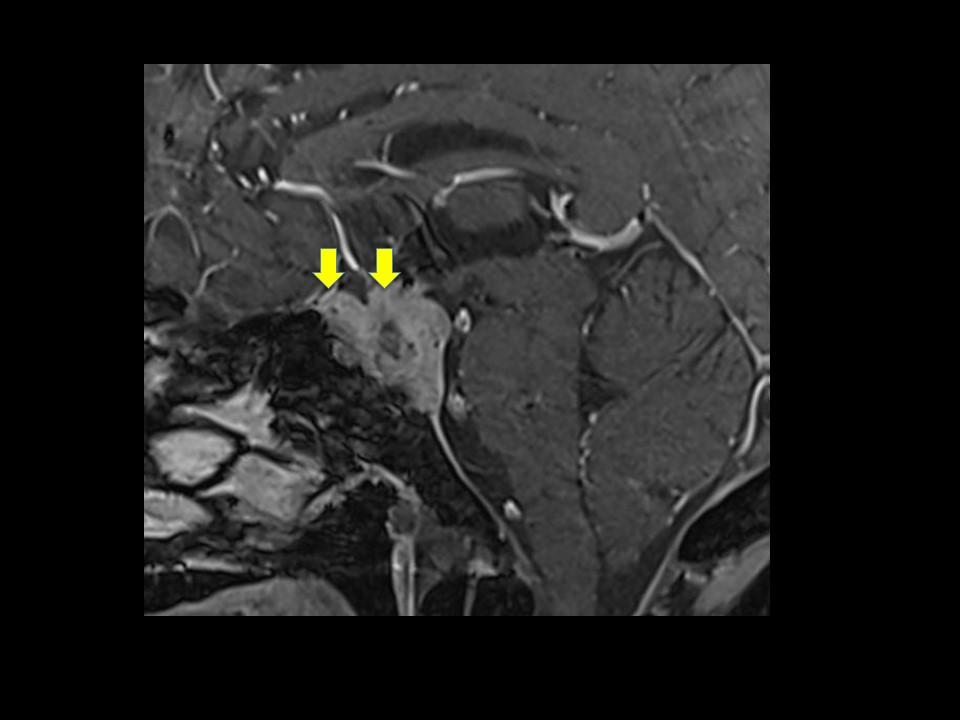 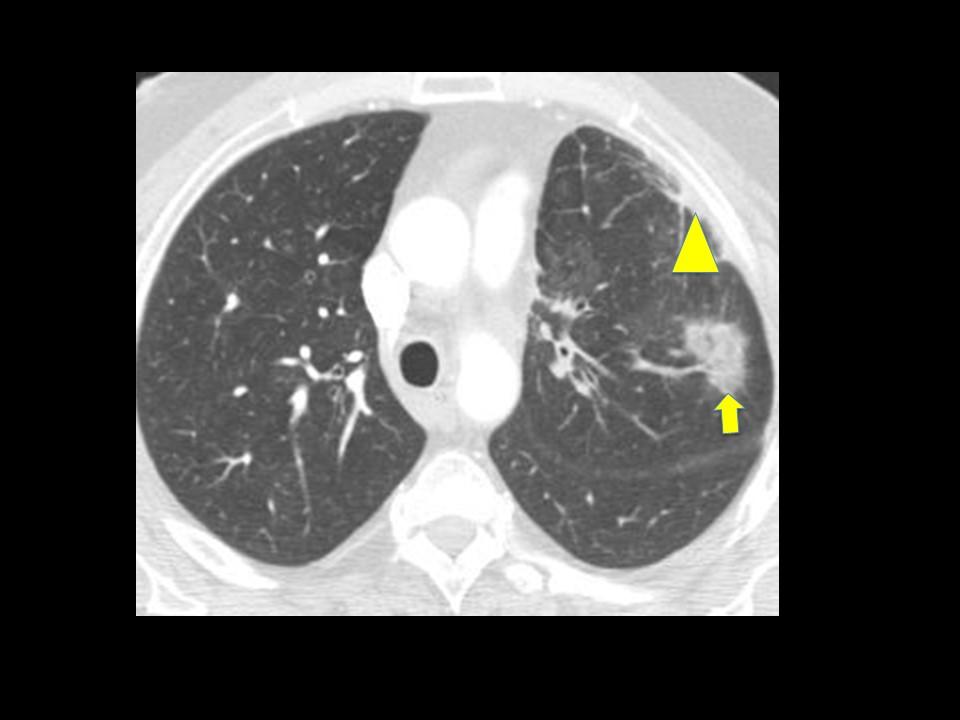 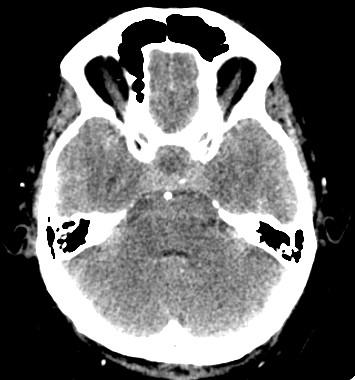 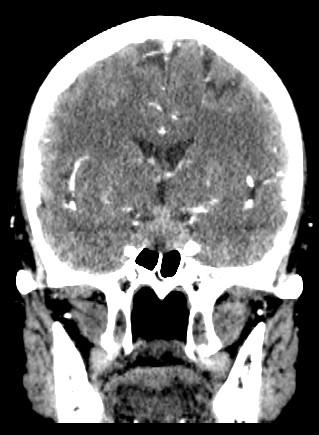 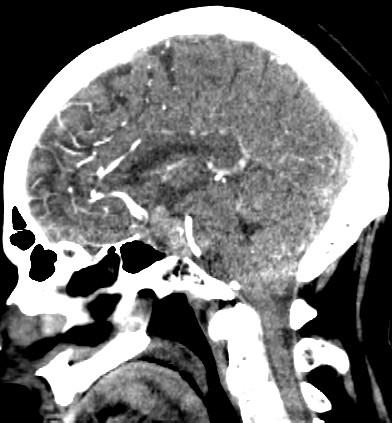