Mondor’s disease of the breast: an uncommon cause of atypical chest pain

A 40-year-old female with no medical history presented with three days of left-sided chest pain. She denied any recent chest wall injury. She was not experiencing any additional symptoms. Her vital signs were stable. Physical examination revealed a tender area of the superior left breast with a palpable cord.

Left breast ultrasound with Doppler evaluation showed thrombosis of a superficial vein at the area of reported pain, consistent with superficial thrombophlebitis.

Mondor’s disease, first described in 1939 by Henry Mondor, is a benign self-limiting condition characterized by a painful palpable cord in the anterior chest wall or upper abdomen due to thrombophlebitis of the superficial veins. [2,3,4] Several cases involving the superficial veins of the arm and the dorsal vein of the penis have also been described. [1,3] The lateral thoracic, thoracoepigastric, and superior epigastric veins are thought to be the three veins most often affected in Mondor’s disease. [4] Superficial thrombophlebitis of the breast is often idiopathic; however, cases can be caused by trauma, infection, radiation, an ill-fitting bra, or maybe iatrogenic in nature (for example, following a biopsy or lumpectomy).

Due to lack of awareness, Mondor’s disease is not commonly considered in the differential diagnoses for chest pain, even once urgent cardiovascular conditions have been safely ruled out. Diagnosis via history and physical examination is usually sufficient, although ultrasound can be used to confirm the presence of superficial thrombophlebitis, and to rule out other underlying breast conditions or lesions. [2,4] Mondor’s disease typically presents as a tender palpable, sometimes visible, subcutaneous cord. Although mammography is not required for diagnosis, it may be obtained in women over 40 years of age presenting with a palpable breast lump as per local recommendations and protocols. Biopsy is not indicated in cases of superficial thrombophlebitis.

Acute superficial thrombophlebitis of the breast can be identified using sonography and mammography. Ultrasound findings of include a subcutaneous anechoic round or tubular structure with intraluminal echogenicity that does not demonstrate any flow with Doppler. [5] Additional findings of localized edema and skin thickening may also be present. Mammographic findings of Mondor’s disease include a dilated tubular density, which may be mistaken for a dilated duct, and in the presence of other findings suspicious for malignancy, may lead to biopsy. [5] Reactive axillary lymphadenopathy may be identified.

Although Mondor’s disease is benign and self-limiting, the use of mammography or ultrasound in the diagnostic workup resulting in a Breast Imaging Reporting and Data System (BI-RADS) category 3 recommendation may necessitate short-term follow up within 6 months, especially in the presence of ipsilateral axillary lymphadenopathy or other suspicious findings. [5] Treatment may not be required, although warm compresses and anti-inflammatory medications may alleviate symptoms. Most cases of Mondor’s disease self-resolve within 8 weeks. [2]

Mondor’s disease is a self-limiting disease that typically presents as a subcutaneous tender palpable cord and can be identified via sonographic evaluation with Doppler of the affected area. 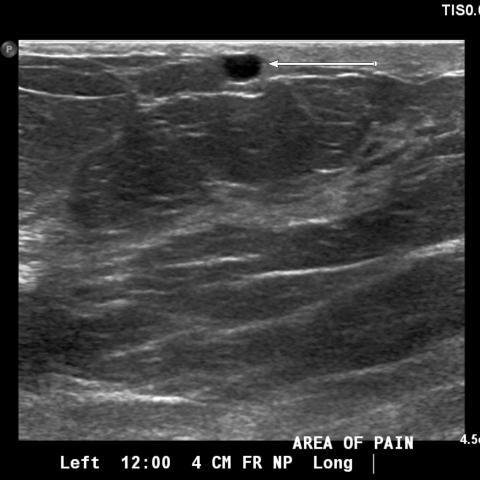 Sonographic examination of the left breast shows a dilated superficial vein with low-level echoes at the area of reported pain.
Figure 2 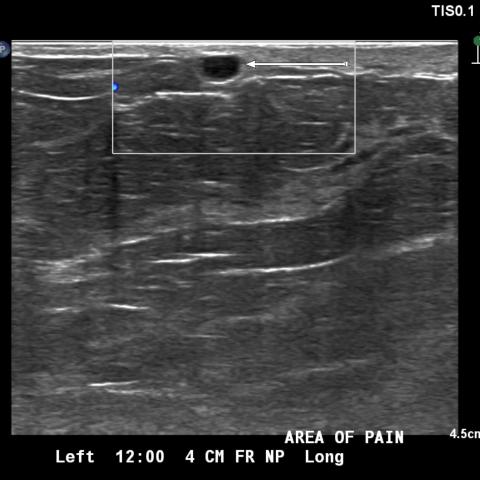 Sonographic examination of the left breast with colour flow Doppler evaluation demonstrates no flow within the superficial venous structure, consistent with thrombosis. 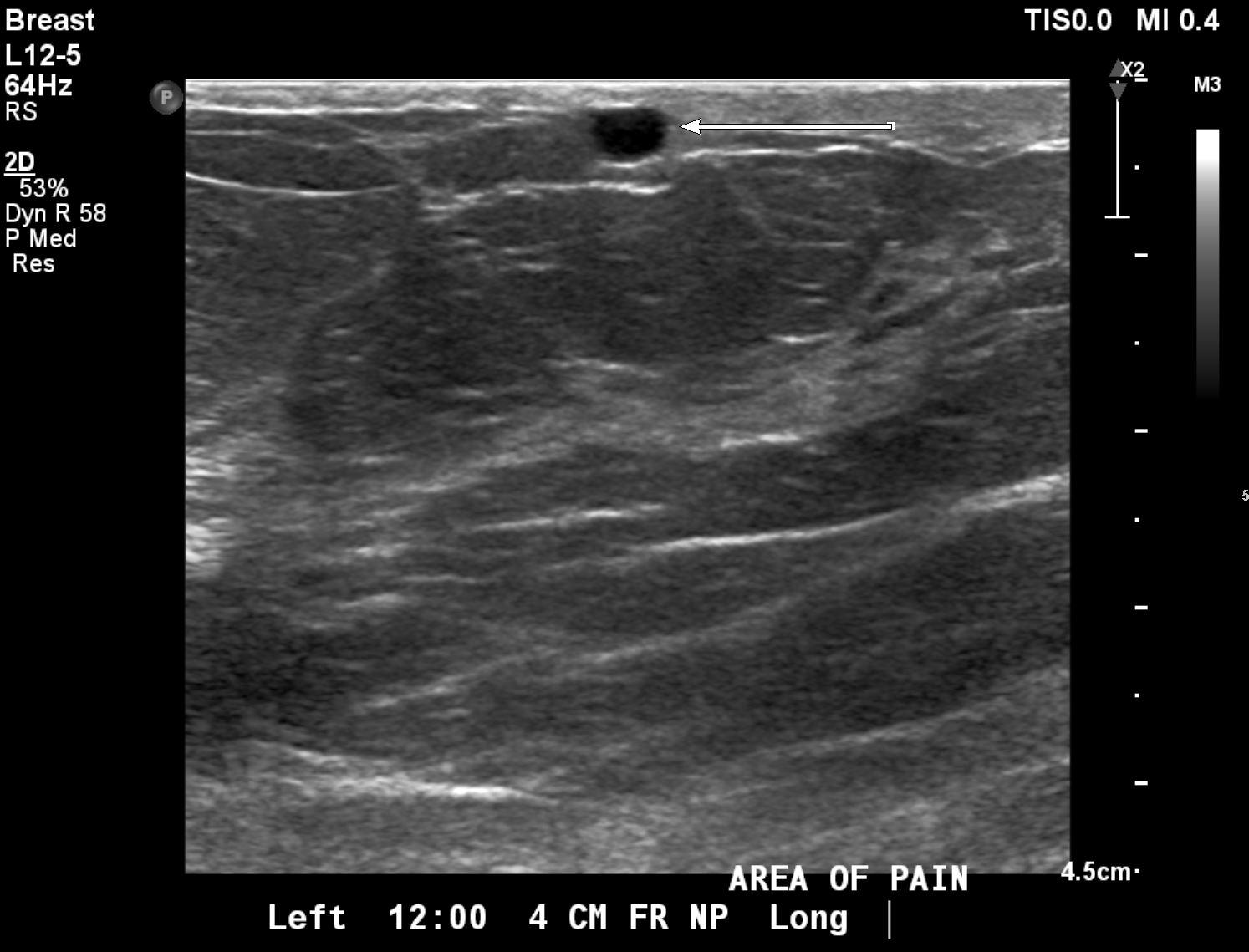 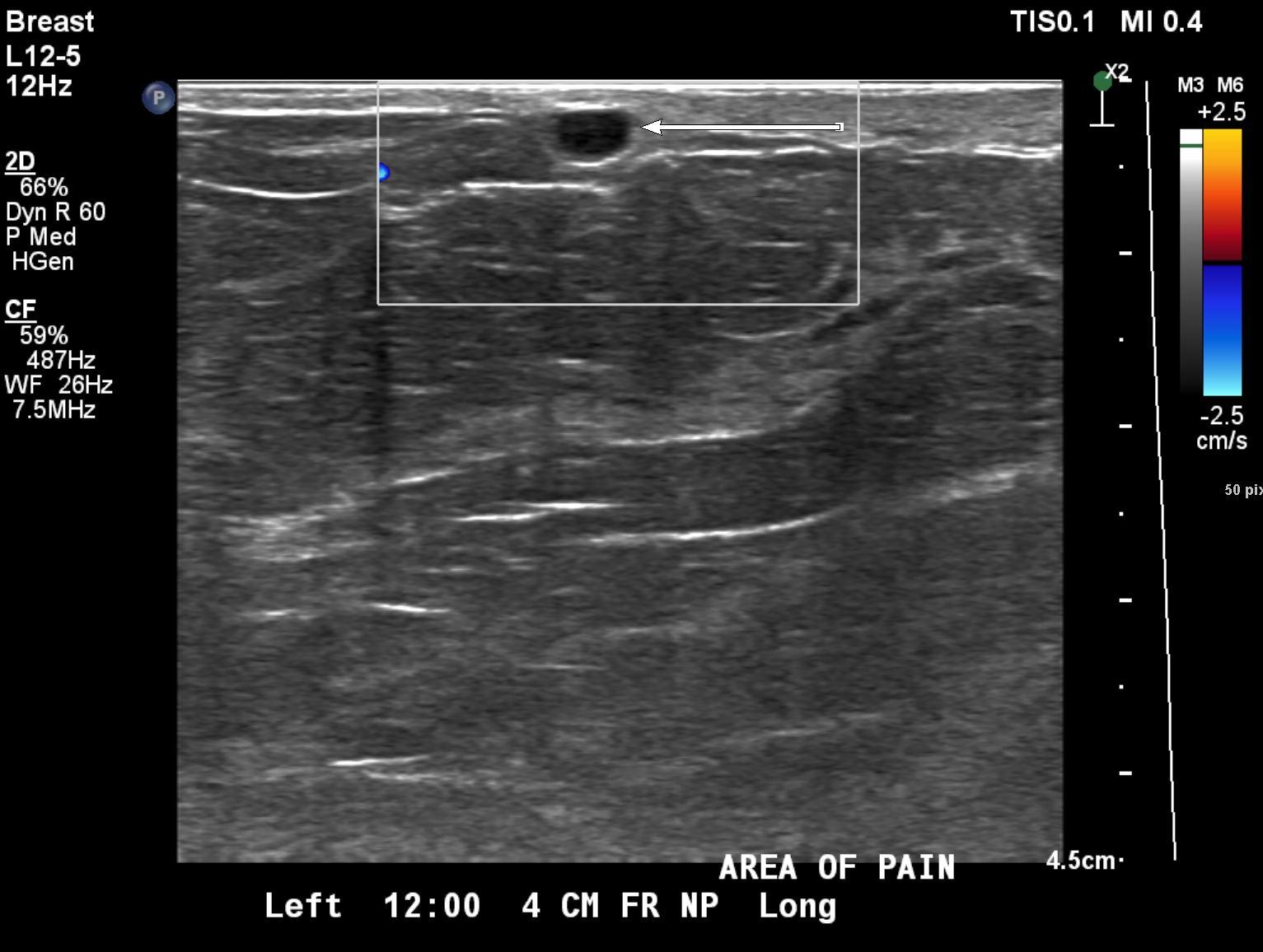