CT-urography showed a large 12 x 5.5 cm hypodense mass in the right side of the pelvic region infiltrating the upper right part of the bladder. No obstruction or abnormalities in the urinary tract. The tumour appeared to originate from the appendix and showed contrast enhancement in the edge zone and a predominantly hypodense less vascularized central part. Interpreted as a mucinous appendiceal tumour. Confirmed by cystoscopy with biopsies taken from the invasive tumour in the bladder.

In our case the patient had tumour invasion of more than 50% of the bladder wall and histology showed a mucinous appendiceal adenocarcinoma. A cystectomy, right side hemicolectomy and a HIPEC (hyperthermic intraperitoneal chemotherapy) procedure were performed followed by postoperative adjuvating chemotherapy. The patient is now monitored by PET-CT scanning.

The symptoms of appendiceal tumours can be non-specific, delaying the diagnosis. In most cases (30-50%) patients present with acute appendicitis. In the advanced stages, the patient might report increasing waist circumference, abdominal pain, weight loss and anaemia.[1-3]

It is crucial for the radiologist to be aware of the signs of a mucinous appendix. Especially because the spill of mucin from the appendix during routine appendectomy or biopsy can result in polymyxoma peritonei (PMP) and thereby worsen the prognosis and clinical outcome. Mucinous ovarian cancer is another important pathway to PMP. Therefore, when PMP is encountered is important to check the appendix and the ovaries regarding primary mucinous tumours. [1,4]

The most common radiologic finding in the setting of mucinous epithelial tumours is a mucocele with or without wall calcification. In later stages PMP, periappendiceal or localized mucin deposits can be detected. MRI is recommended for staging and follow-up, the mucin is well detected on the T2-weighted series. [2,3].

The treatment and prognosis depend on the grading of the tumour which is based on the histological subtype and extension of the disease. Low-grade tumours that have been surgically removed whilst in the early stages, has a 5-year survival rate of 90%. PMP will typically require complete cytoreductive surgery, HIPEC and chemotherapy. Even though the treatment of PMP is more comprehensive, the 10-year survival rate for complete cytoreductive surgery and HIPEC is 63%.  [1,2,6]

Appendiceal mucinous tumours are rare. Encountering a dilated appendix measuring more than 15 mm in diameter with or without wall calcification should raise the suspension.

Encountering PMP – always remember to check the ovaries and the appendix. 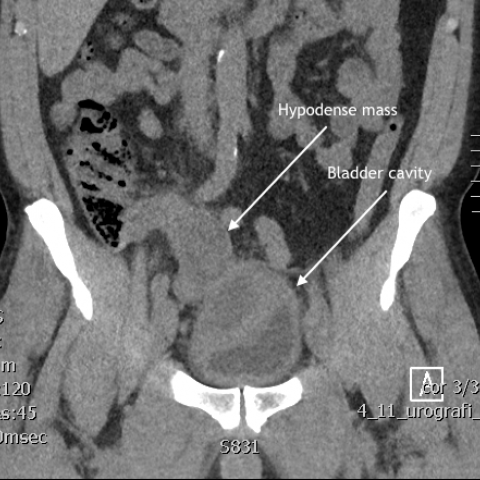 NCCT- scan shows a large hypodense mass in the right side of the pelvis in direct contact with the bladder.
Figure 2 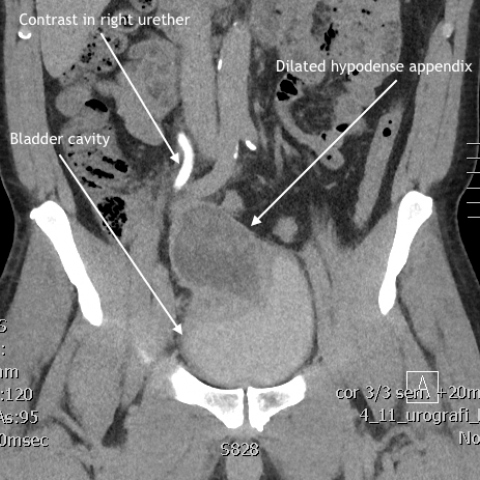 CECT-scan in late phase shows a dilated hypodense appendix with contrast enhancing margin, and invasive growth into the bladder cavity. Contrast is seen in the lower right urether.
Figure 3 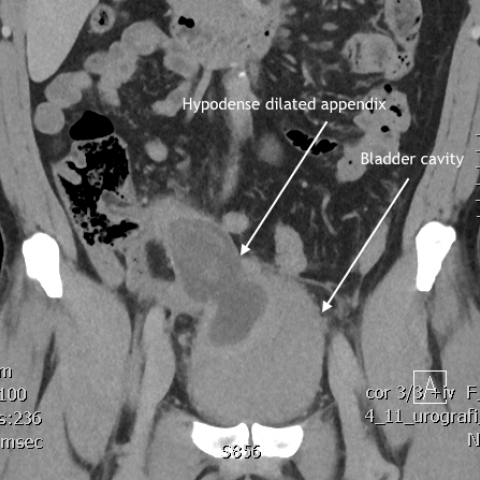 CECT-scan in late phase shows a dilated hypodense appendix with contrast enhancing margin, and invasive growth into the bladder cavity. Contrast is seen in the lower right urether. 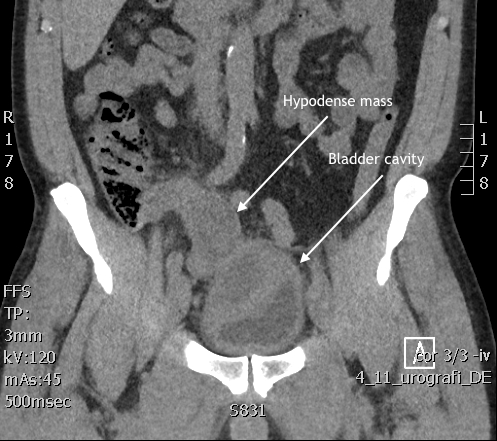 NCCT- scan shows a large hypodense mass in the right side of the pelvis in direct contact with the bladder.
Department of Radiology, Herlev and Gentofte Hospital, Herlev, Denmark 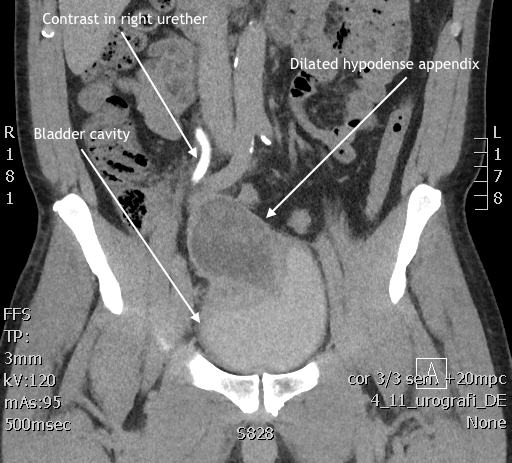 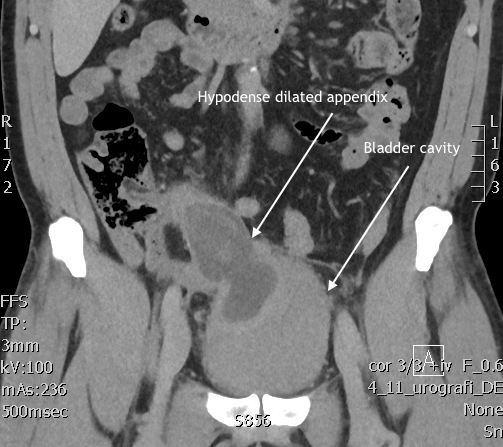