A 33-year-old man with a background of post-traumatic evisceration (Fig. 1) after being victim of a knife assault 10 days ago for which he had undergone an exploratory laparotomy (there was no digestive perforation or lesion of the intra-abdominal solid organs), is admitted to surgical emergency department with a rapidly progressive diffuse abdominal pain. After a quick clinical examination a mechanical bowel obstruction is suspected.

An abdominal x-ray (AXR) is first carried out which confirm the diagnosis of small bowel obstruction (Fig. 2).

An abdominal CT scan with IV contrast is then requested, it shows distension of the small bowel (42 mm of maximum diameter) with hydro-aeric levels, the colon is flat over its entire length (Fig. 3). The CT also finds a characteristic bowel-within-bowel aspect with visualization of the fat and the mesenteric vessels inside a digestive segment which confirms the diagnosis of acute intestinal intussusception (Fig. 4 - 5 - 6). Absence of parietal enhancement was also identified in the affected segment (Fig. 4 -5). The peritoneum was free from any air or fluid effusion. Finally, no foreign body was clearly identified on the CT scan.

The acute intestinal intussusception corresponds to a telescoping of two intestinal loops. Relatively frequent in the pediatric population, it is rarely encountered in adults in whom it is in 70 to 90% of the cases secondary to an organic origin (in particular related to the presence of a parietal lesion of the small intestine : polyp, lipoma, lymphoma, adenocarcinoma ...). [1]

The post-operative form is very rare in children (<1%) and exceptional in adults. If discovered, a foreign body  (in particular a textiloma) should be suspected [4].

Unlike intestinal obstruction secondary de bridles, post-operative intestinal intussusception often occurs in the first week of post-operative surgery. The symptoms can sometimes be deceptive; usually it evolves bilious vomiting, abdominal distension, fast worsening of the general state, and sometimes a palpable abdominal mass or rectal bleeding. The intussusception is usually in the small intestine, and intestinal ischemic necrosis requiring resection is rare [1].

The diagnosis of acute intestinal intussusception is generally made using CT scan, but other imaging modalities can sometimes be helpful. AXR, if realized, confirms occlusion by showing bowel distention and hydro-aeric levels. It may also show pneumoperitoneum if there is bowel perforation (Fig. 2).

Abdominal ultrasound is also a reliable tool especially in children. Signs include the “target sign” (or doughnut sign) which appears as alternating echogenic and hypoechoic bands (Fig.7). On a longitudinal section we find the so-called "pseudo-kidney" image (Fig. 8 - 9), which corresponds to the succession of layers of hypoechoic digestive wall compared to the more central and hyperechoic mesenteric fat. A color doppler supplement maybe useful when looking for signs of ischemic necrosis of the intestine [1] [2].

The abdominal CT scan is the modality of choice for assessment of IIA.  It shows a “bowel-within-bowel” aspect (CT equivalent of the US target sign) which appears as multiple concentric hypo or hyperdense rings. IV contrast must be used, as It makes it possible to assess the degree of bowel suffering and to make the etiological diagnosis in most cases (Fig. 3 - 4 - 5) [1] [2] [5].

The acute intestinal intussusception in adults being in the majority of cases secondary to an organic cause, the treatment is surgical and usually consists of a resection of the affected segment (taking into account the viability of the digestive tissue) with or without immediate end-to-end anastomosis [1] [3].

Picture of penetrating wound of the abdomen with evisceration of the small bowel.
Figure 2 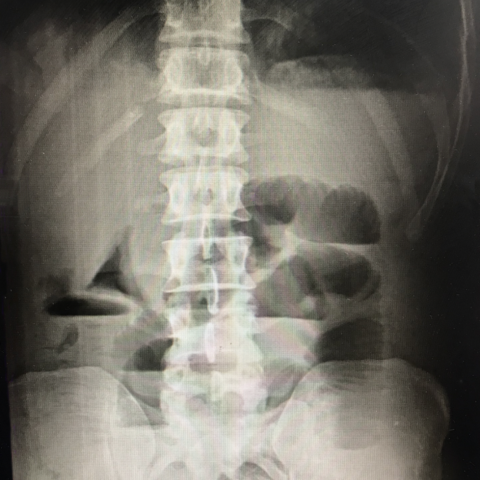 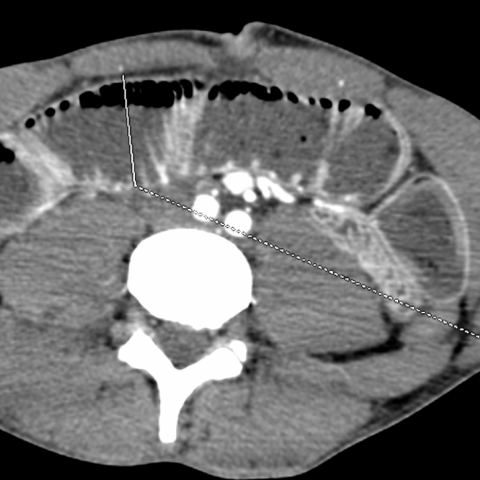 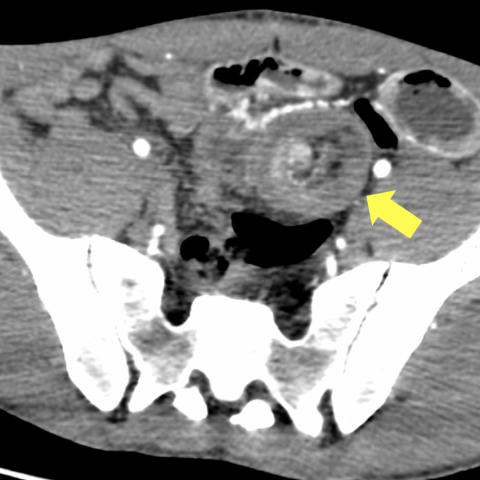 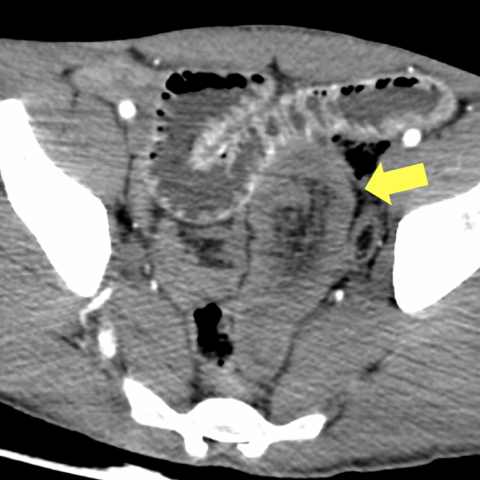 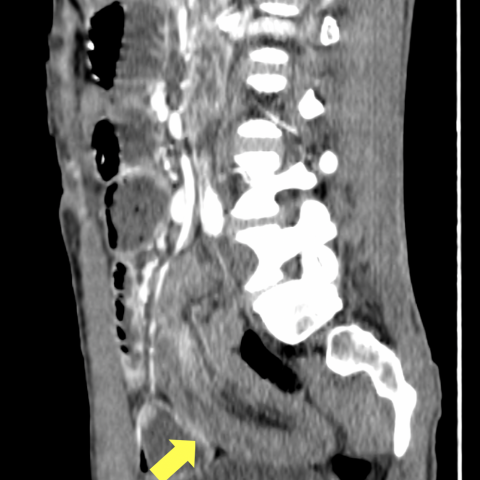 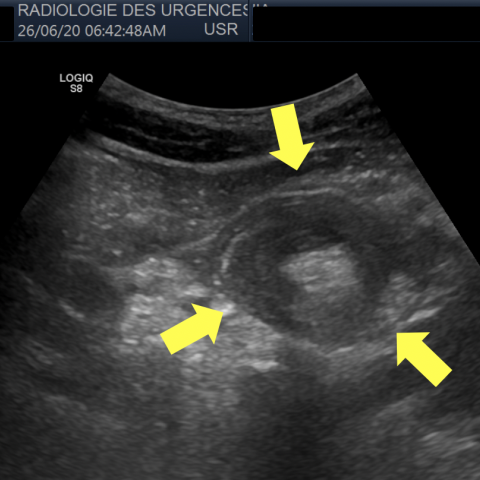 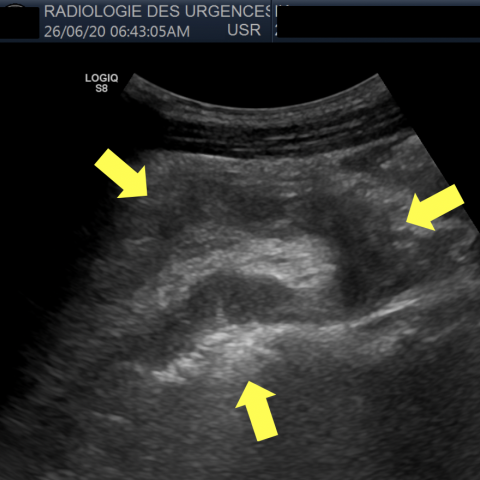 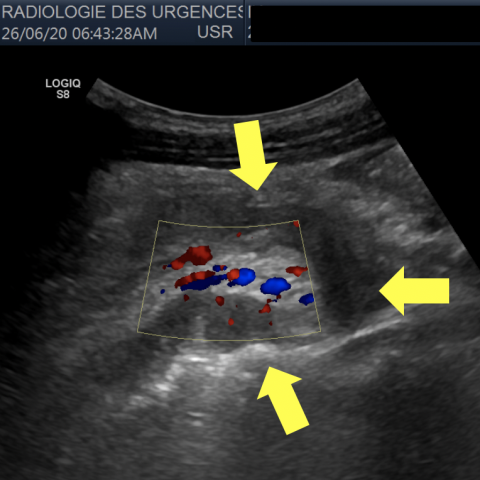 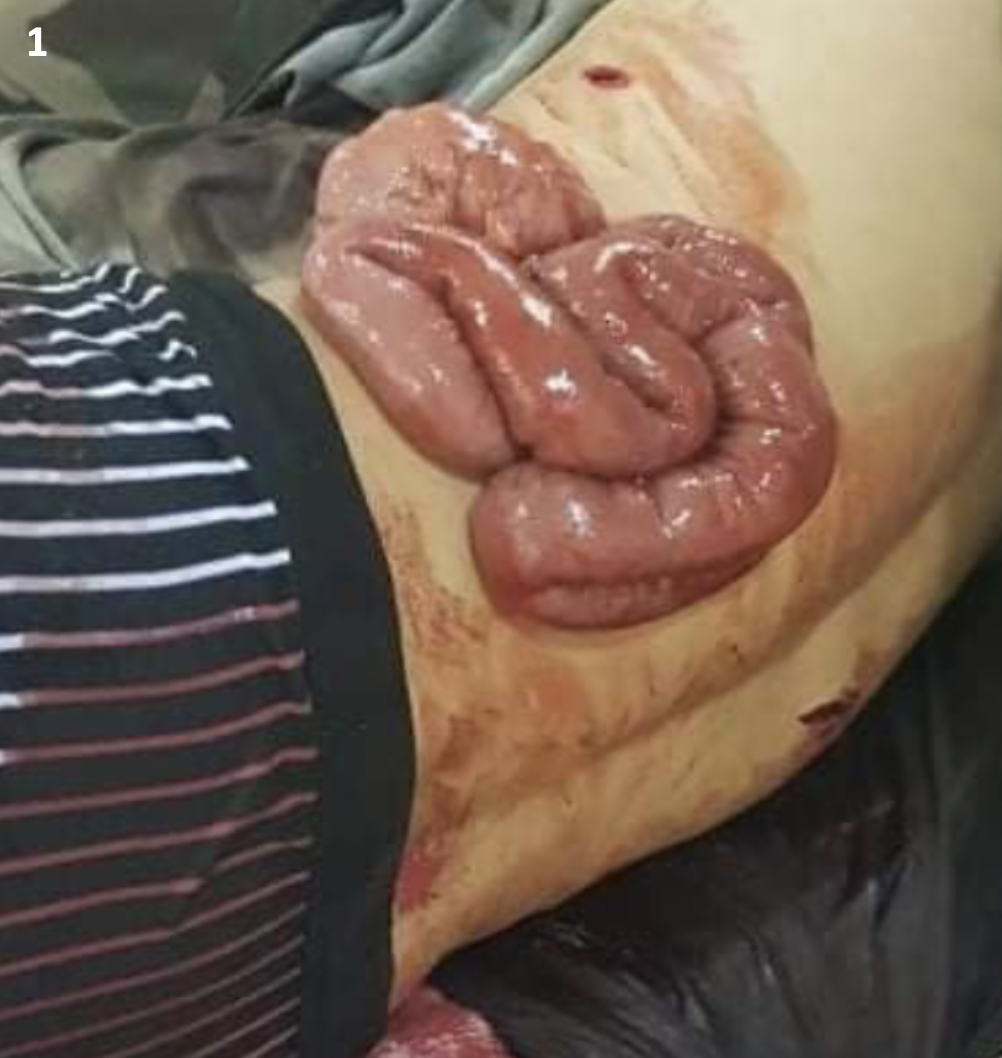 Picture of penetrating wound of the abdomen with evisceration of the small bowel.
© Emergency Radiology Department, University hospital of Rabat, Morocco, 2020 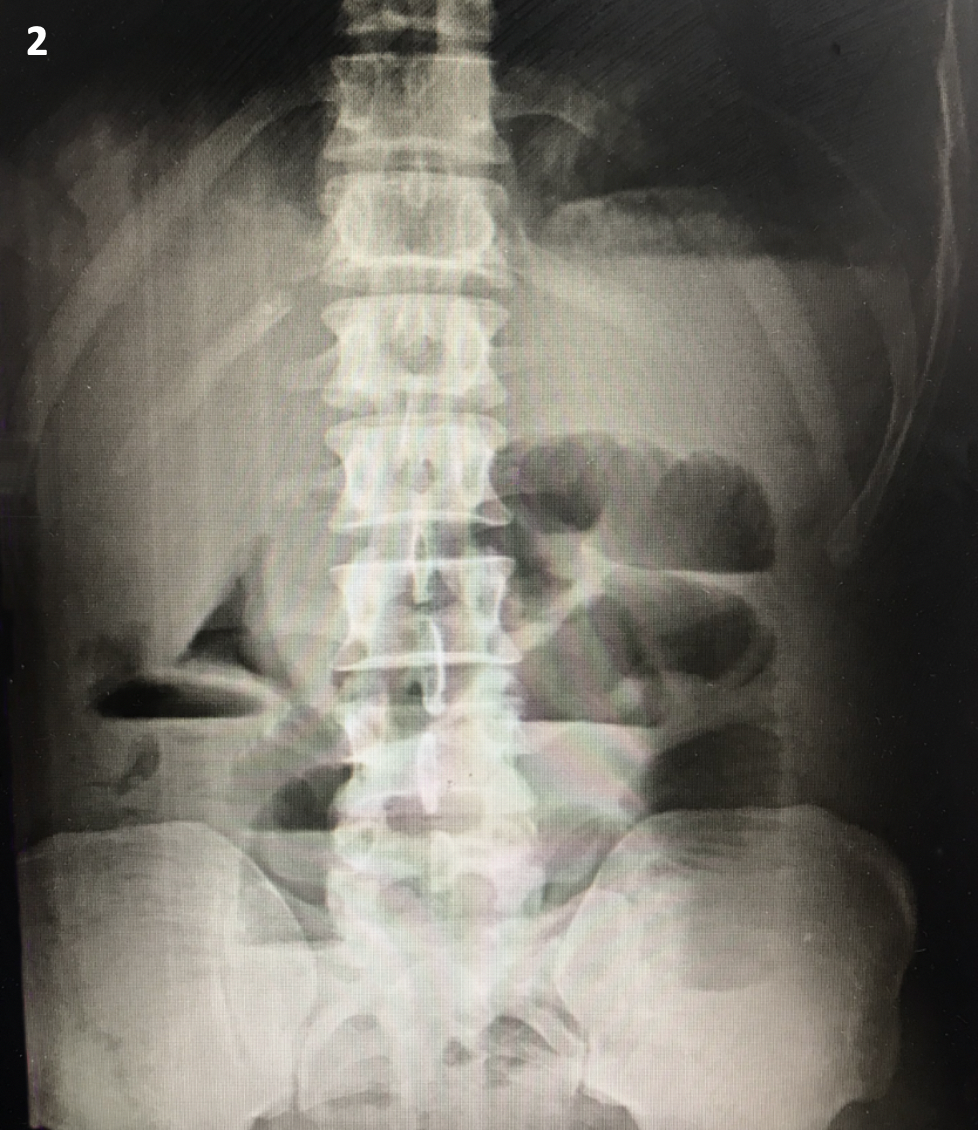 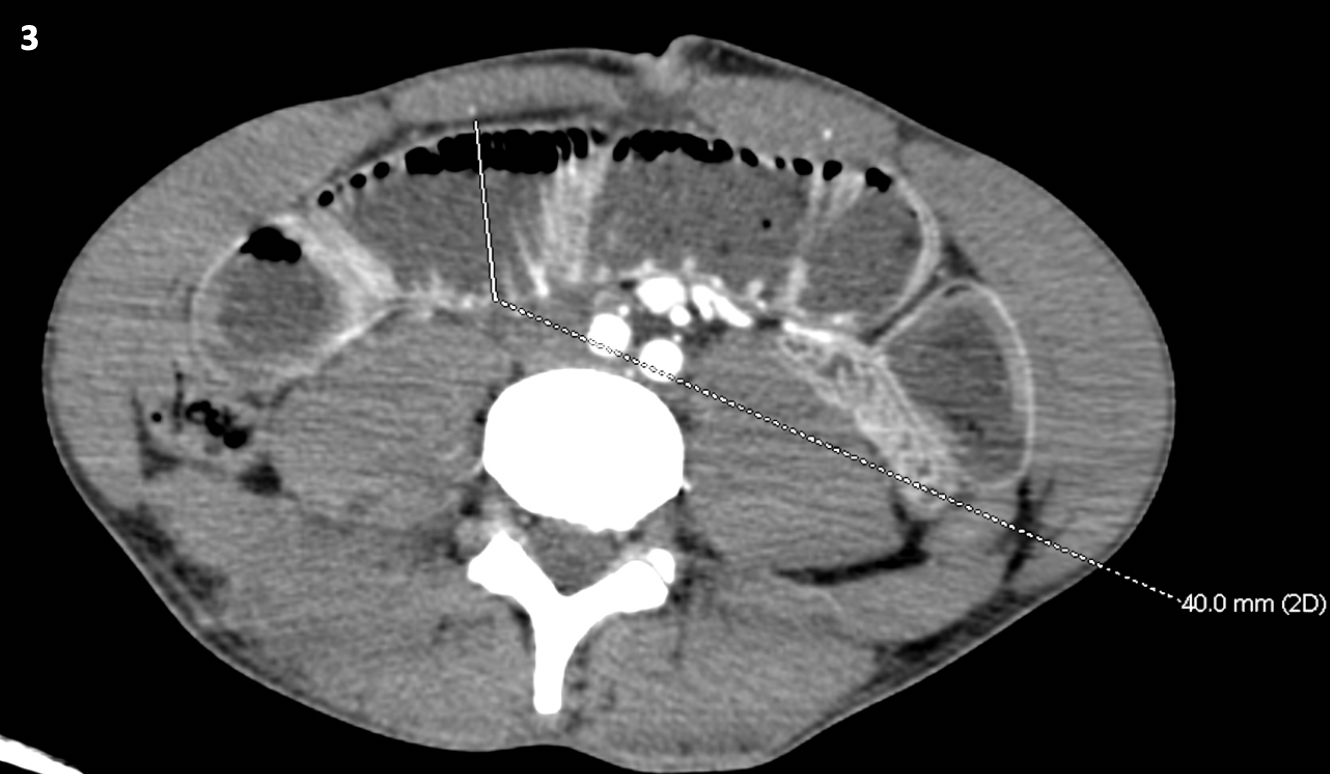 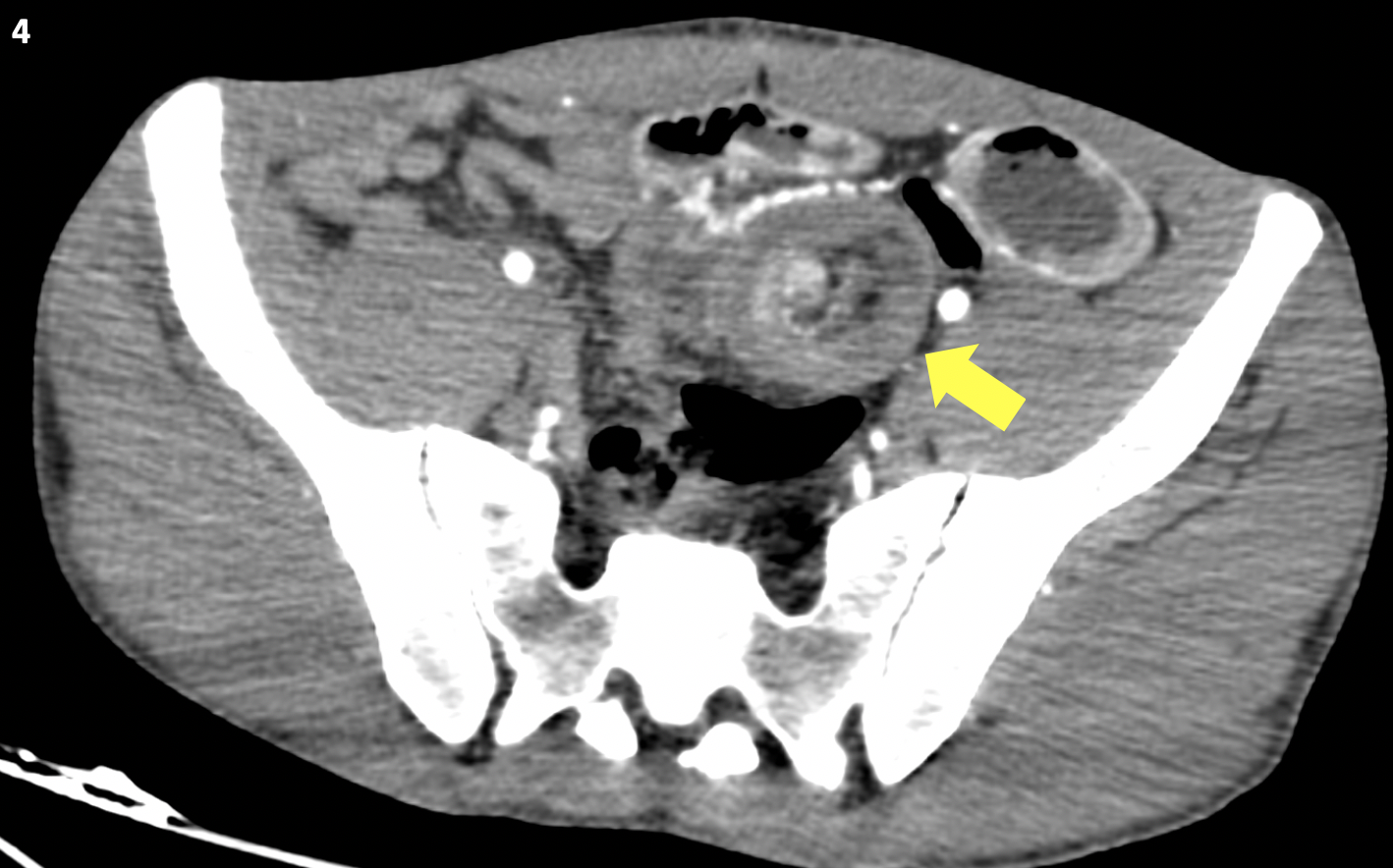 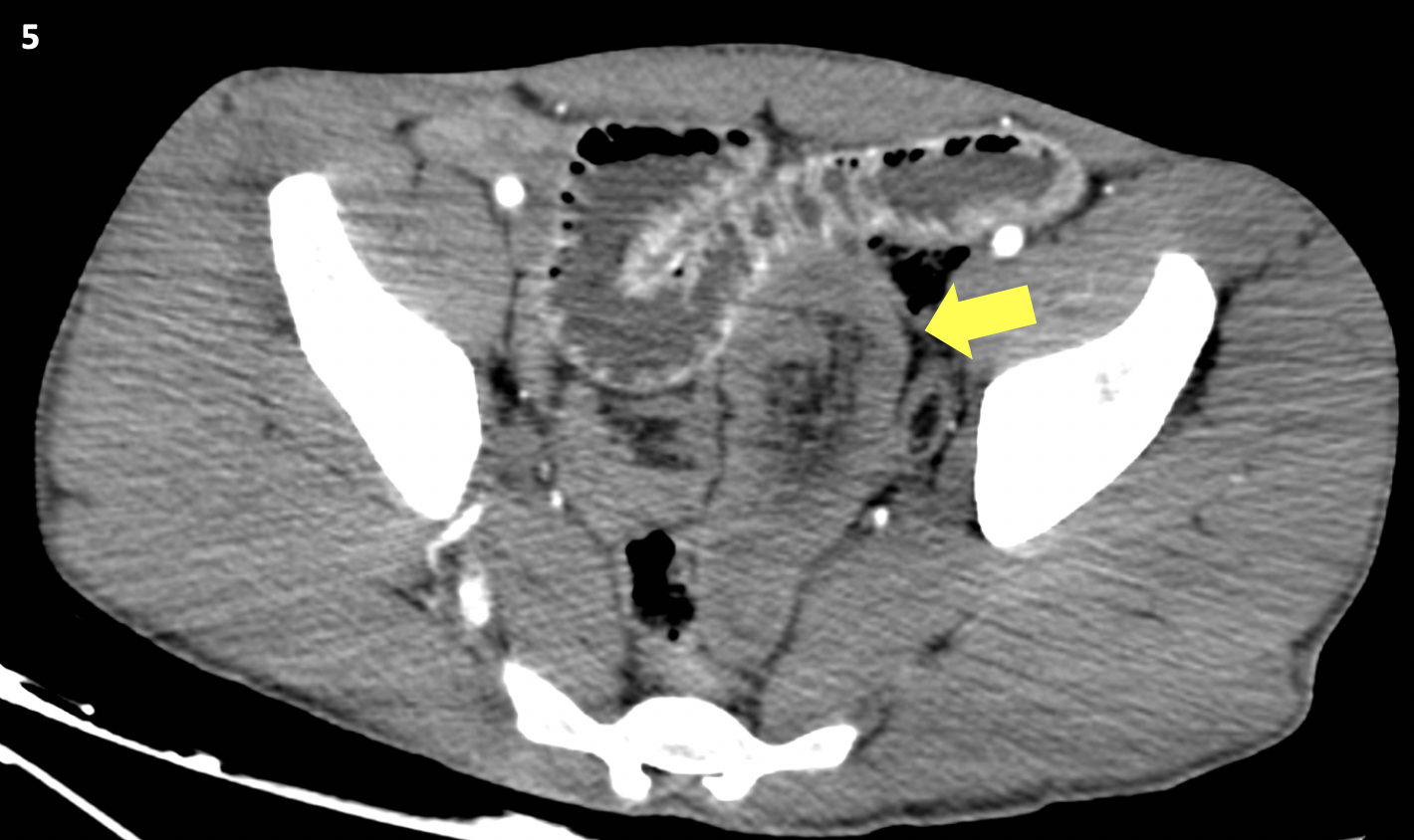 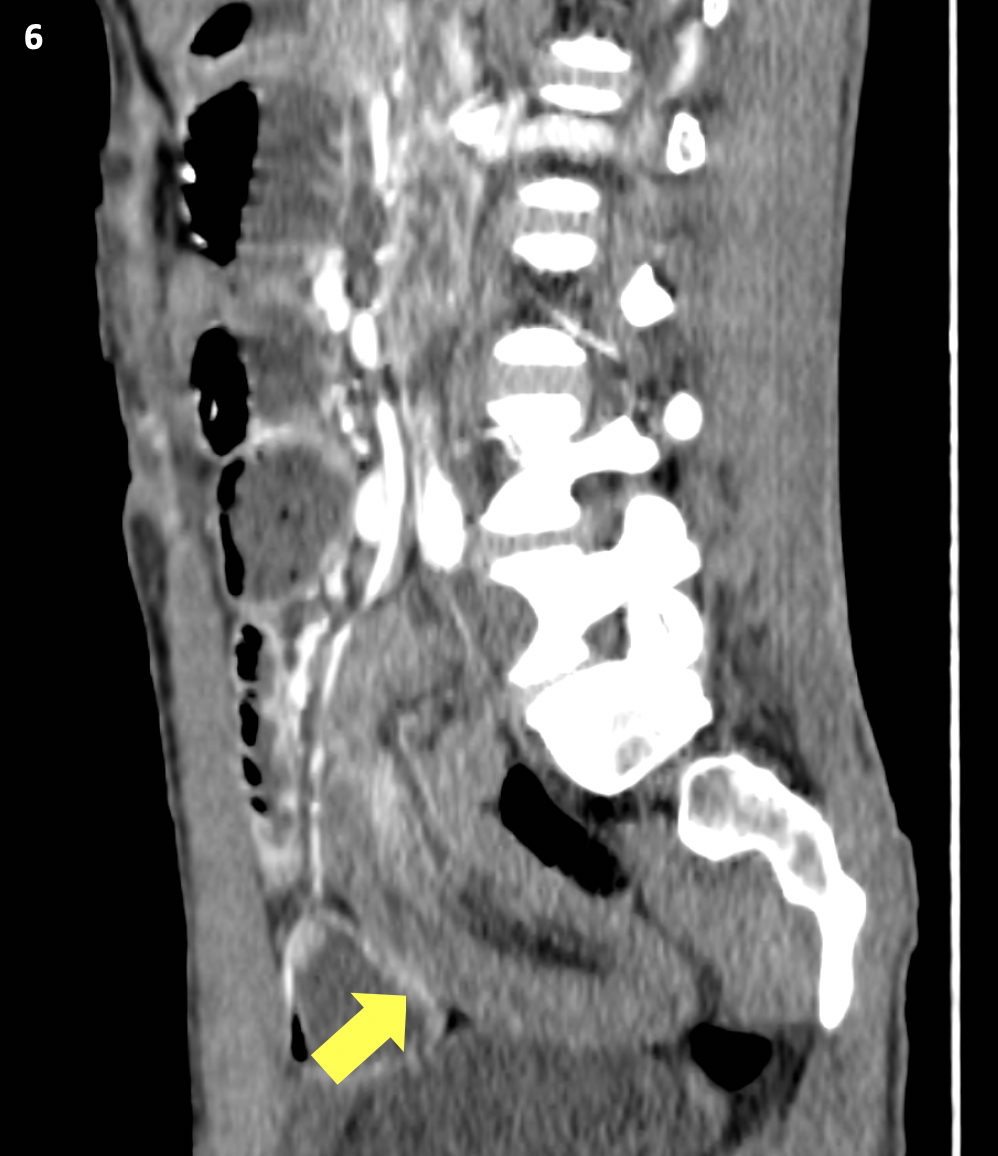 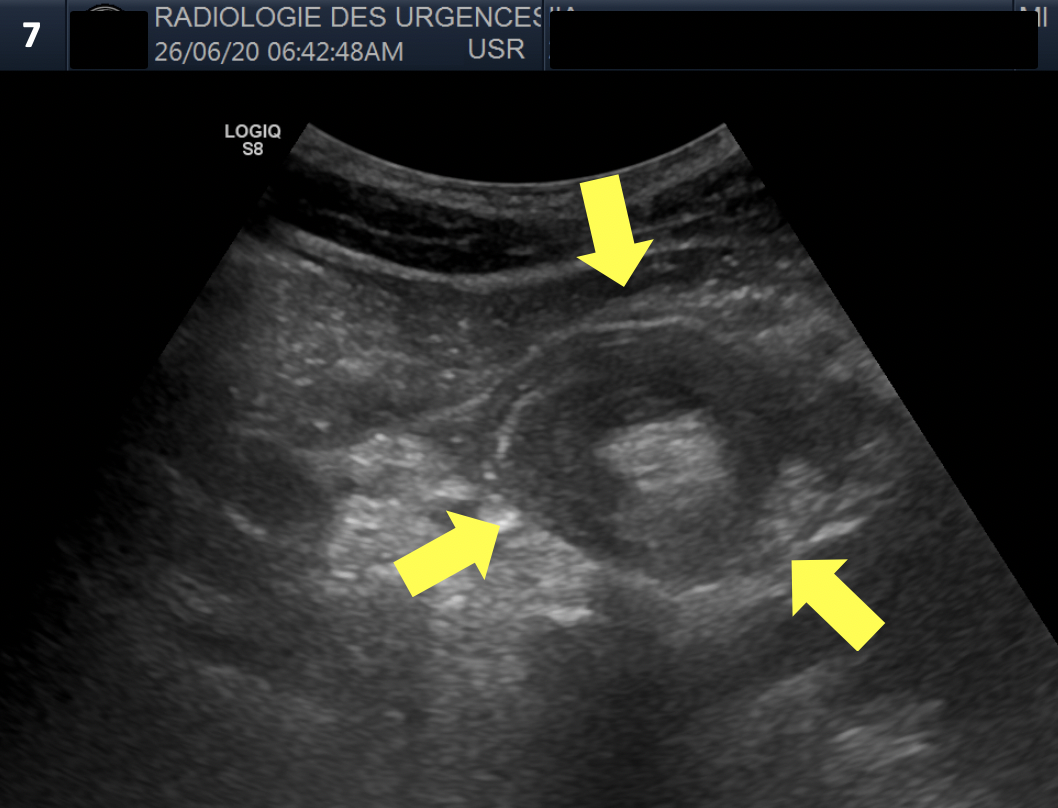 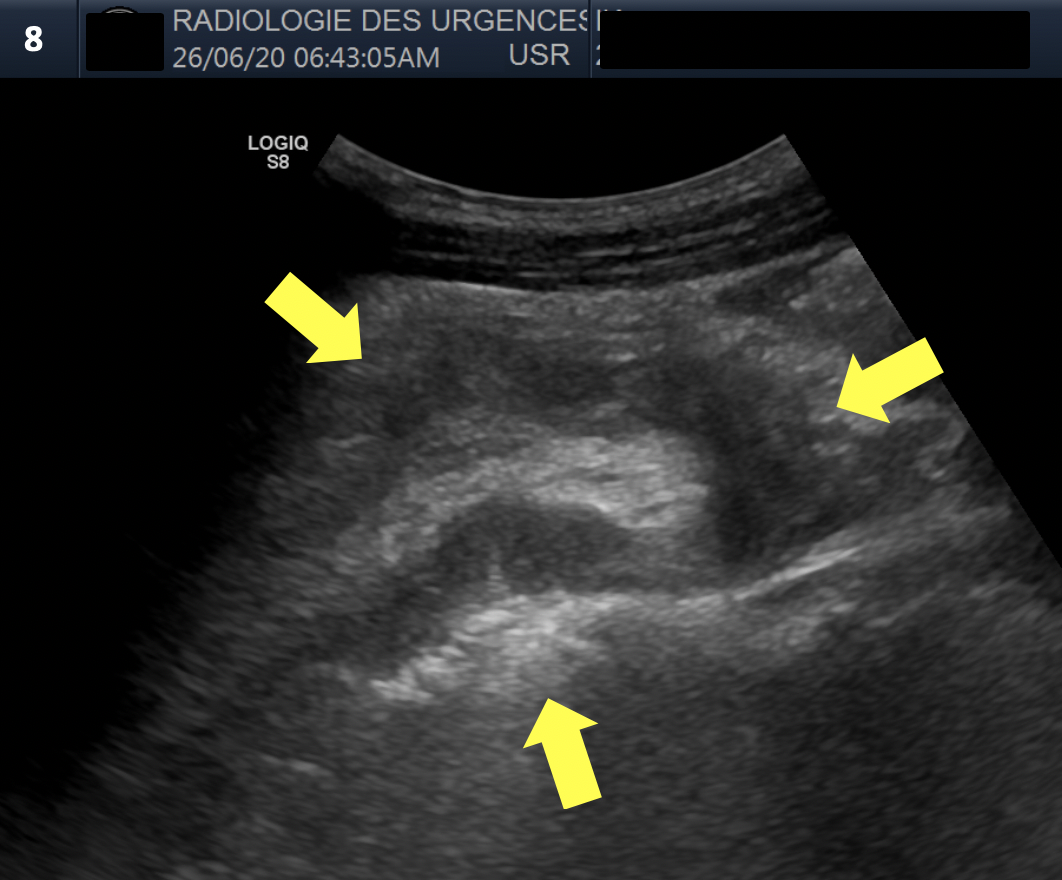 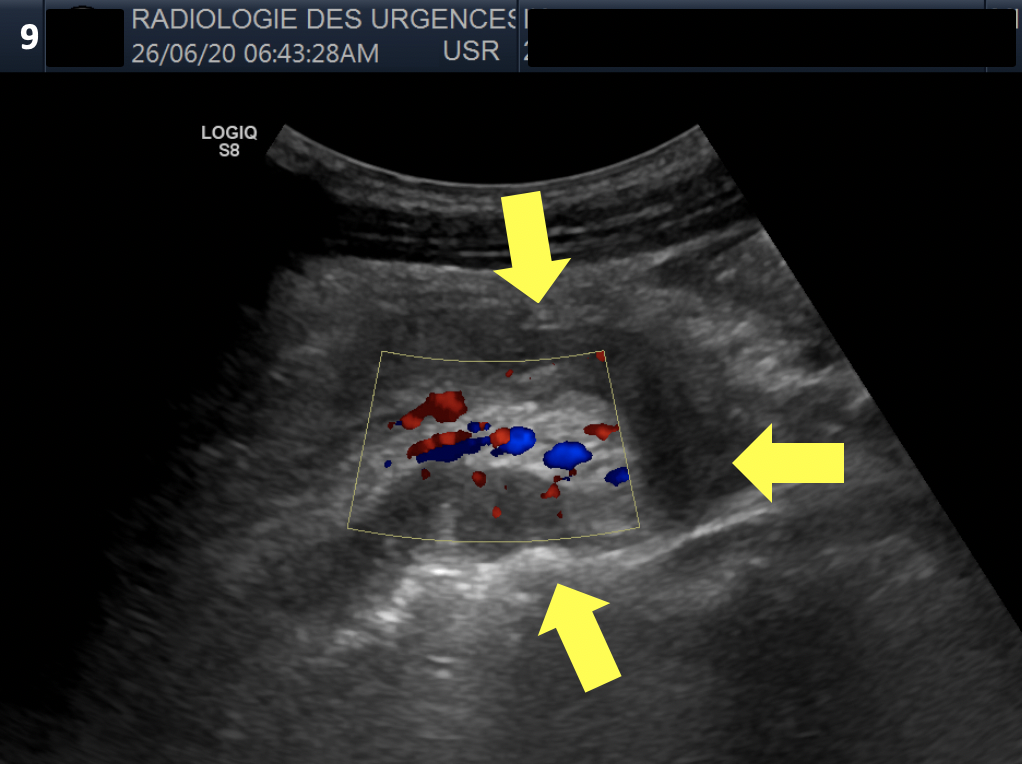