Silicone-induced granulomas of breast implant capsule (SIGBIC) in a woman with history of breast cancer: a case report

A 50-years-old woman carrying BRCA1 mutation and history of right breast carcinoma underwent right mastectomy with retro-pectoral reconstruction in 2006. The implant was a silicone gel implant, with pure polyurethane surface, oval base and anatomical profile with inferior pole.

She referred to our breast unit for her annual check.

On the left side, digital mammography was negative, as well as the ultrasound (US) examination.

On the right side, US examination (Figs. 1 and 2) showed no signs of implant rupture. Between the implant and the fibrotic capsule, in the upper-outer quadrant (UOQ) and lower-outer quadrant (LOQ), two circumscribed oval masses, with heterogeneous echo pattern were detected, recalling the presence of inhomogeneous debris.

Breast MRI was then performed in order to assess the exact nature of the alterations.

The examination confirmed an intact implant, without signs of intra or extra-capsular rupture.

In the LOQ, inside the fibrotic capsule, a 3 cm oval solid mass was identified, dislocating medially the implant. The lesion was characterized by inhomogeneous signal on T2WI (Fig. 3), central spots of restricted diffusion on ADC map (Fig. 4) and progressive enhancement after contrast medium injection (Fig. 5).

A smaller lesion with the same MRI features was identified in the UOQ (Figs. 6 – 8).

A thin layer of free fluid was observed surrounding the lesions and the implant.

The positioning of a breast implant induces the formation of a fibrous capsule around the implant itself, which is composed of various types of cells like macrophages, lymphocytes, mast cells and fibroblasts.

All types of silicone implant could bleed silicone corpuscles through the elastomer over time, even if they are intact. The virtual space existing between the implant and the capsule is filled by a thin layer of fluid, which can transfer the silicone particles to the inner surface of the capsule. The cells composing the capsule will then be triggered by these particles, stimulating an inflammatory response and the production of collagen, leading to the formation of silicone-induced granulomas of breast implant capsule (SIGBIC) [1].

It is usually an incident finding, but some women could complain clinical signs of implant capsular contracture.

The first approach is usually US, which can find an intracapsular heterogenous mass with snowstorm appearance due to the presence of free silicone. Color-Doppler is usually not helpful, while elastography can help differentiate between intracapsular seroma and granuloma [2].

The definitive approach is made with MRI, which can show the presence of an intracapsular mass with a high heterogeneous signal in T2W sequences and hyposignal in T1W sequences and a compressive effect on the breast implant. On the dynamic sequence, a hyposignal focus can be seen at the interface between the implant elastomer and the granuloma, called “black-drop sign”, corresponding to silicone granules. The mass enhancement is progressive, with a Type I dynamic curve pattern, due to the presence of the intact fibrous capsule working as a barrier; nodular areas of greater vascularisation can be seen within the mass [3].

In our case, the two right intracapsular breast masses showed these exact radiological features, both on US and MRI, except for the black-drop sign, which was not that evident. No sign of nodal involvement was seen. A first hypothesis of SIGBIC was then formulated, but there was still some concern about the eventuality of a breast implant-associated Anaplastic Large Cell Lymphoma (ALCL).

ALCL is a rare entity which usually occurs with a large seroma without spontaneous resolution and capsular contraction [4][5]. Despite this, in some cases ALCL can appear as an isolated new breast mass [6][7].

The patient was therefore subjected to implant removal and capsulectomy. The pathological report showed the presence of organized fibrin material with inflammatory cells and foreign body particles, consisting with granulomas (Fig. 9).

Take home message: an intracapsular breast mass with an intact implant, heterogeneously hyperintense in T2W sequences with black-drop sign and progressive enhancement, could correspond to a SIGBIC. 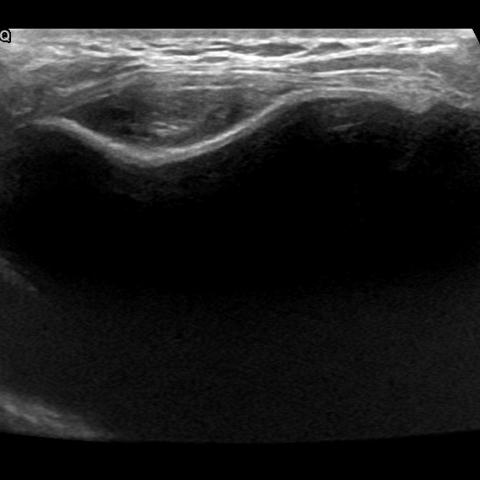 Right Breast US, LOQ. A circumscribed oval mass with heterogeneous echo pattern can be seen between the implant elastomer and the external implant capsule.
Figure 2 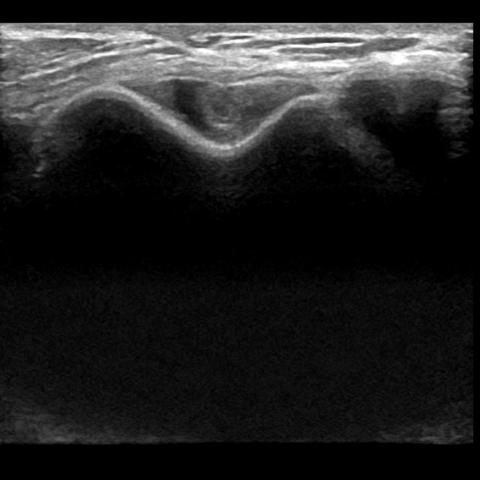 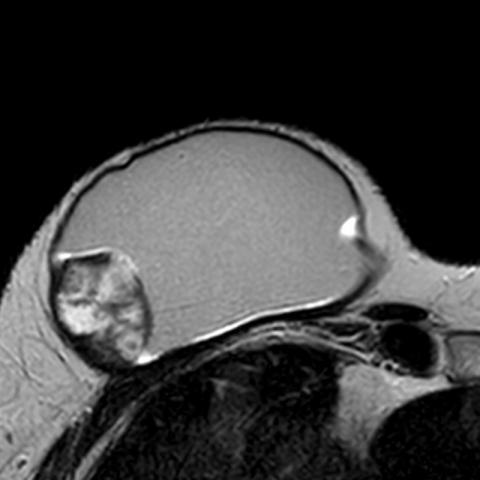 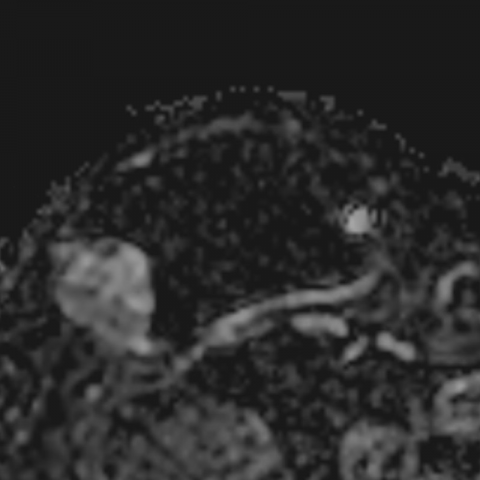 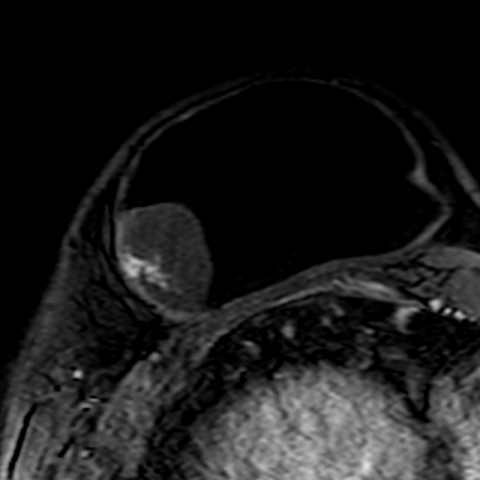 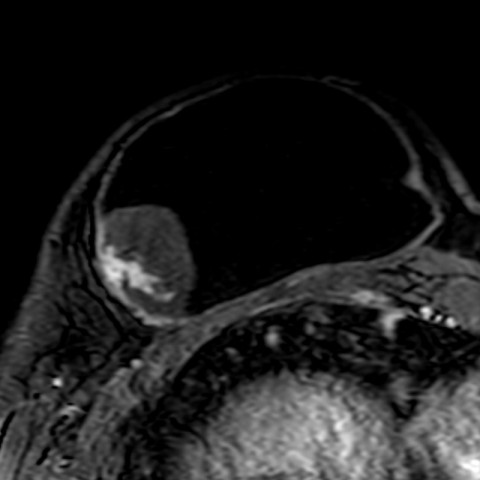 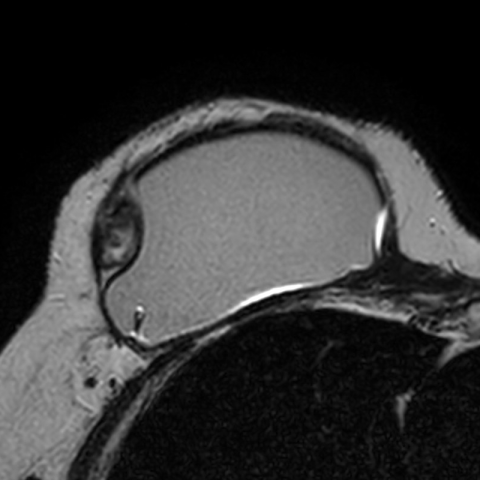 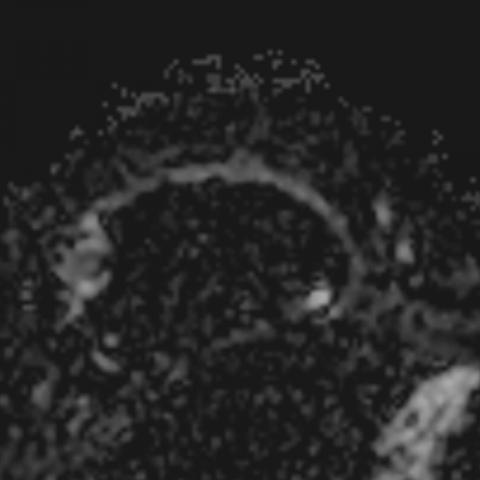 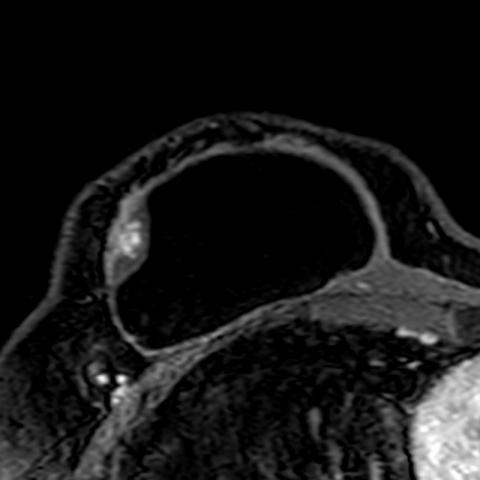 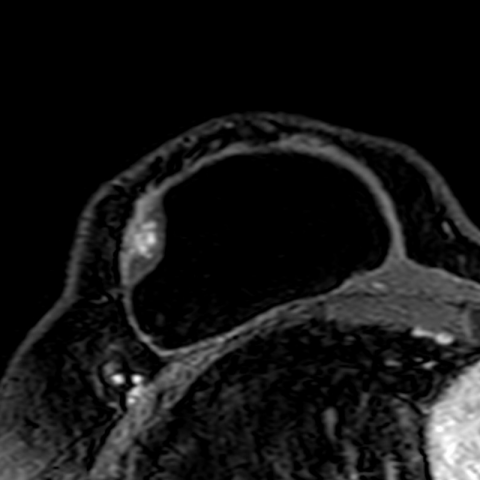 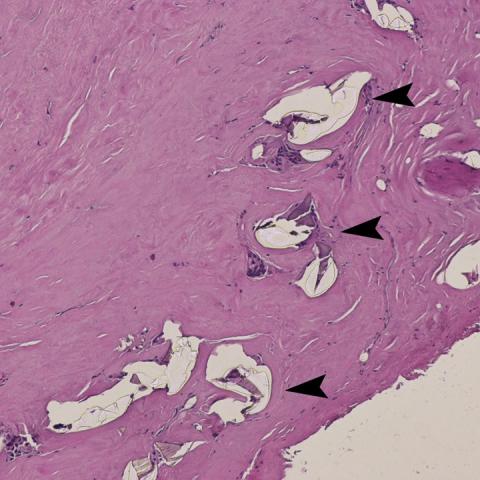 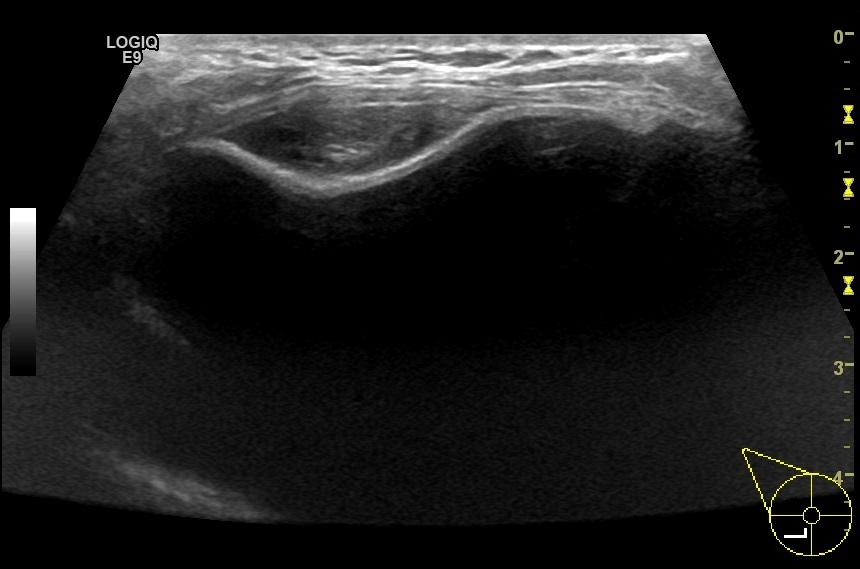 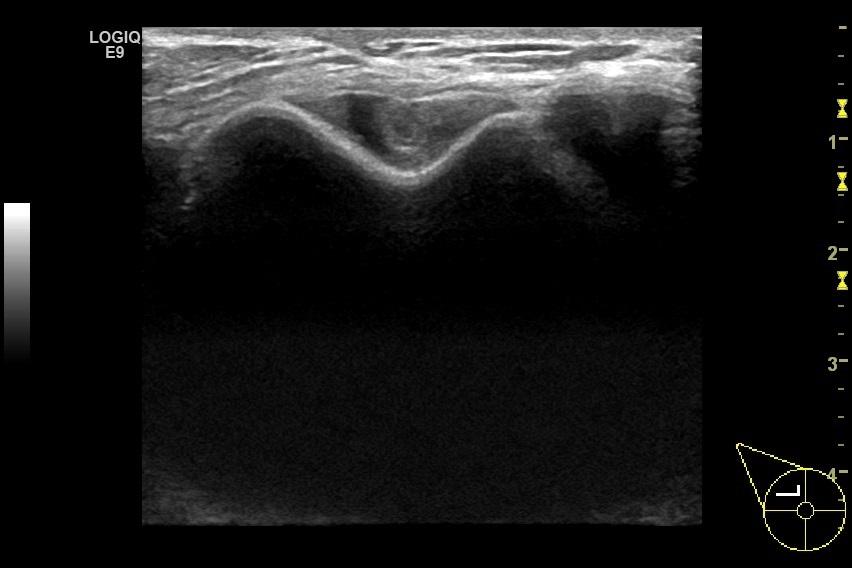 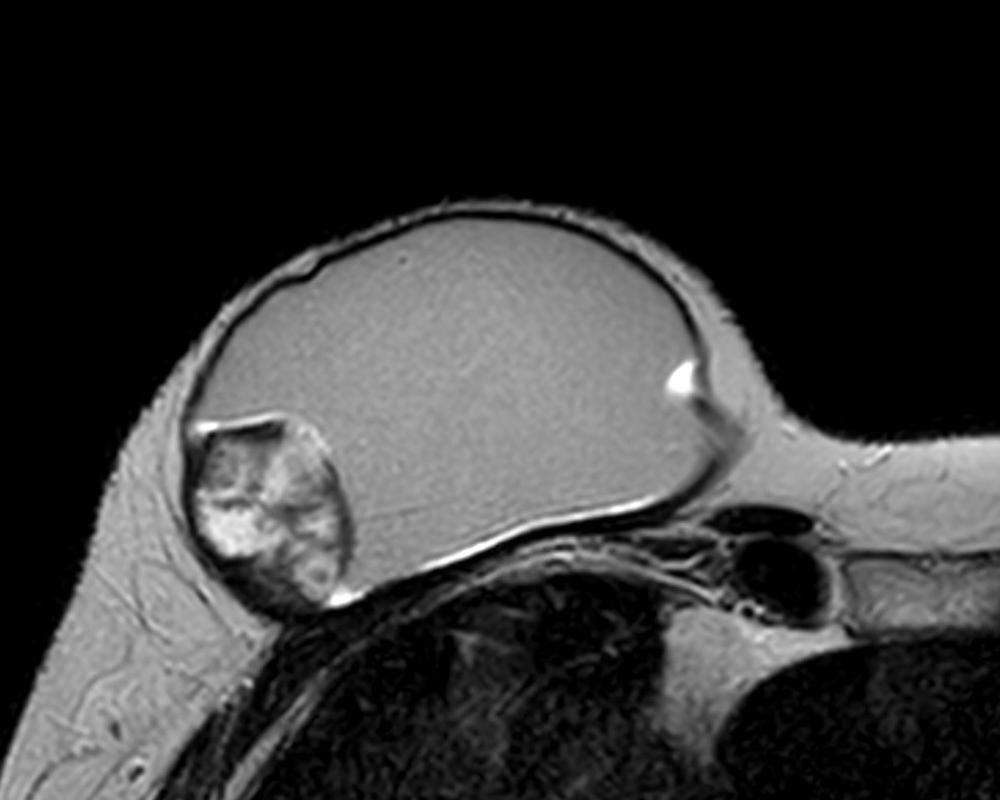 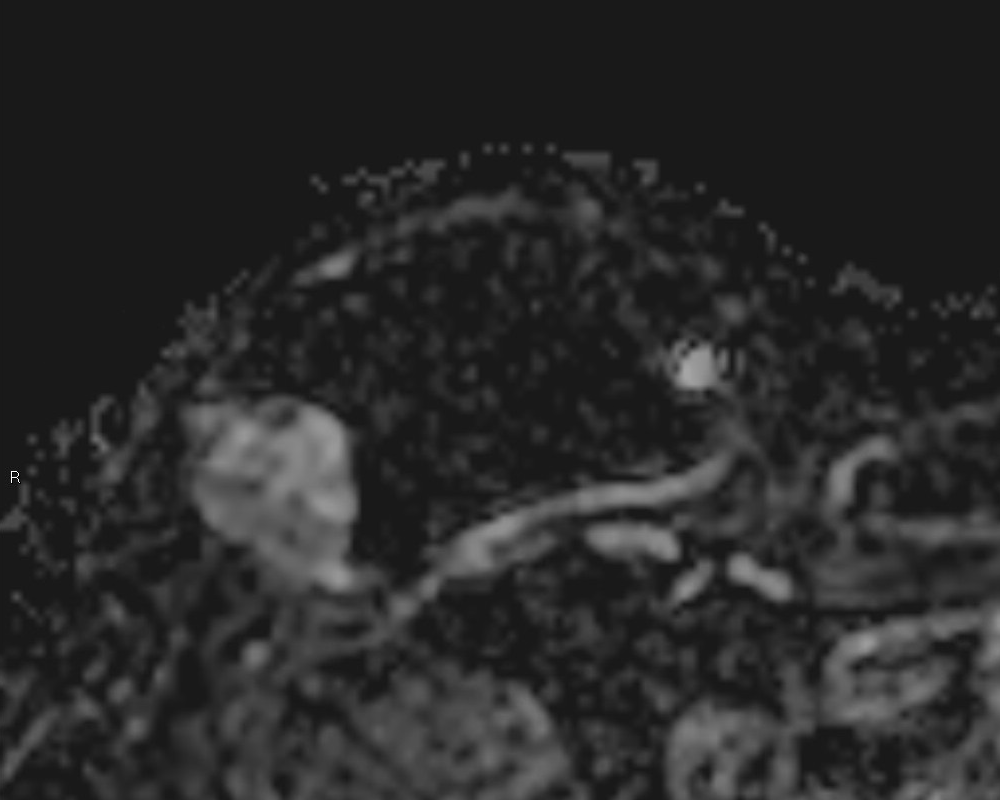 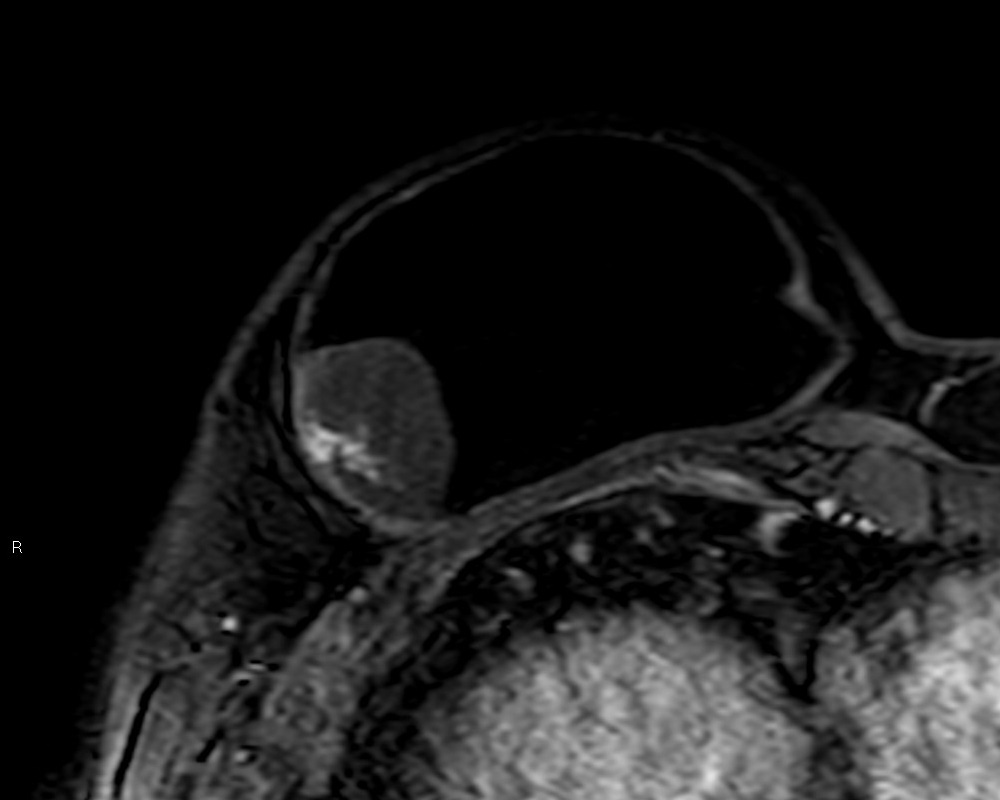 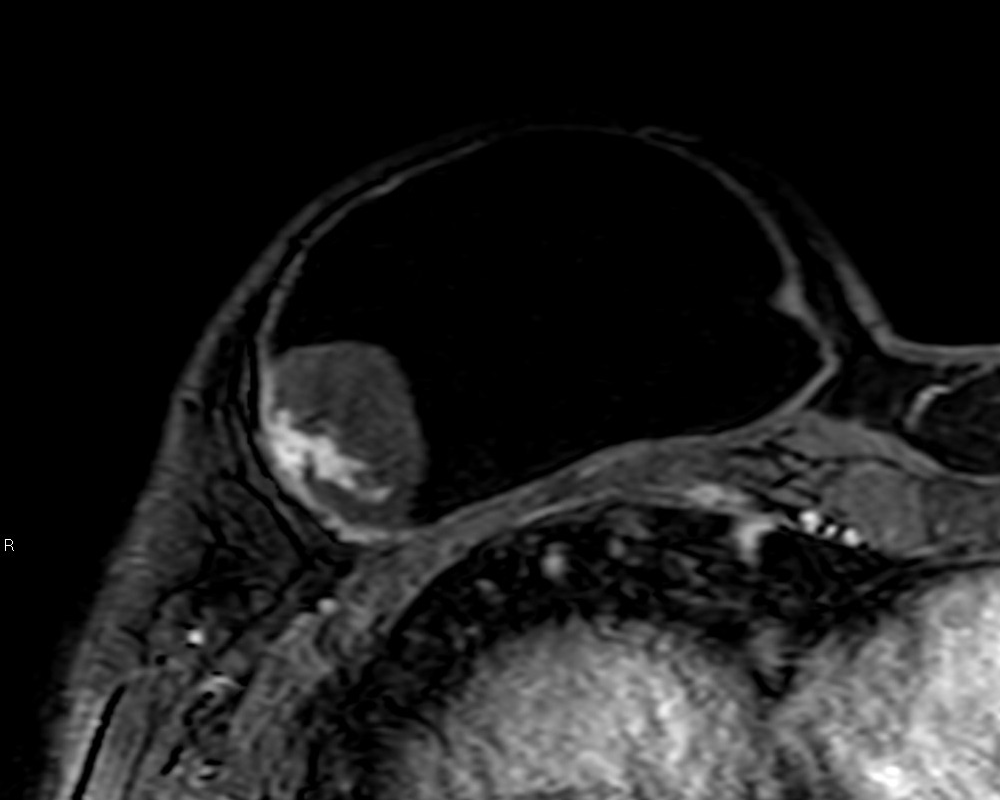 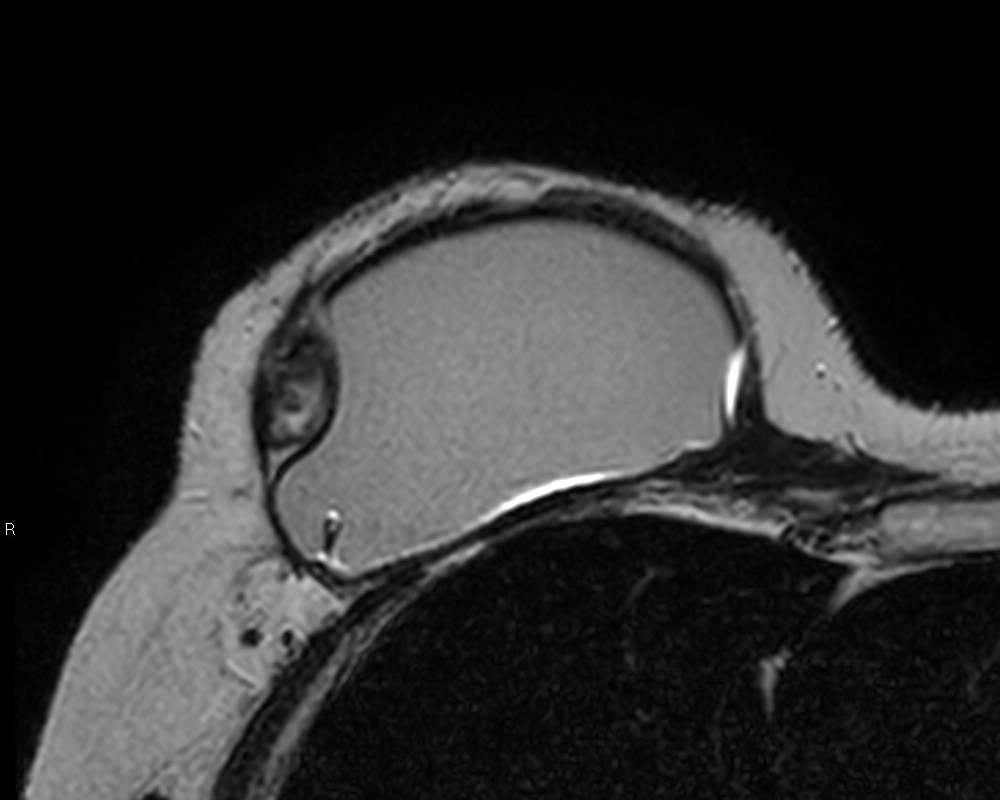 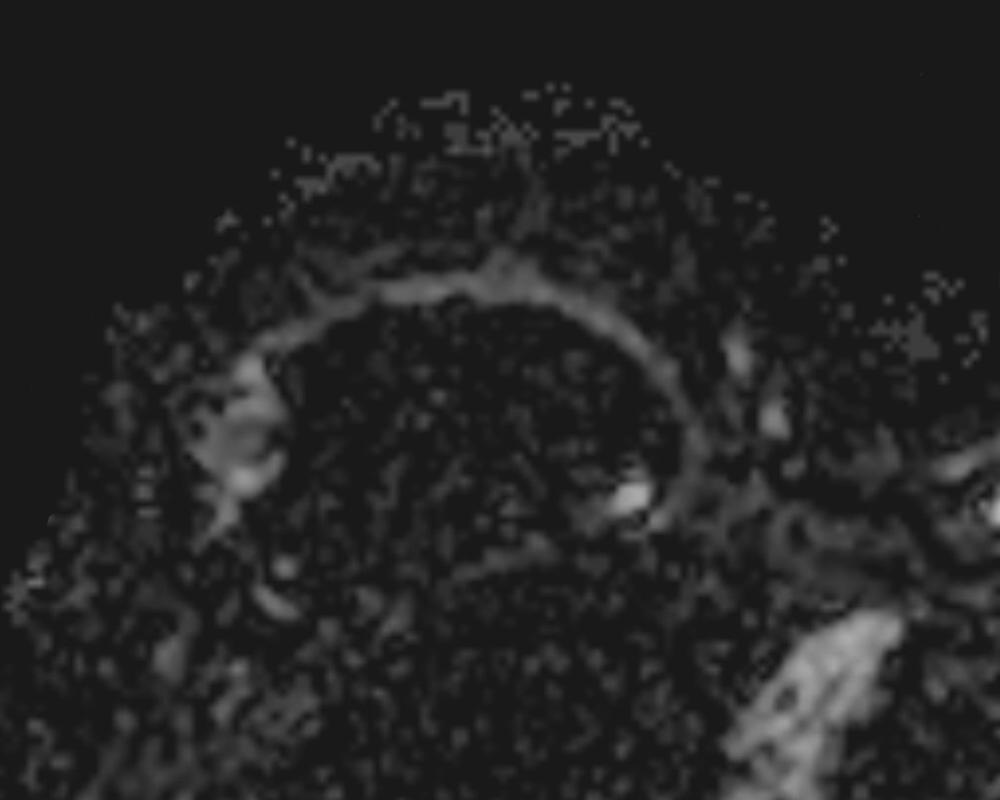 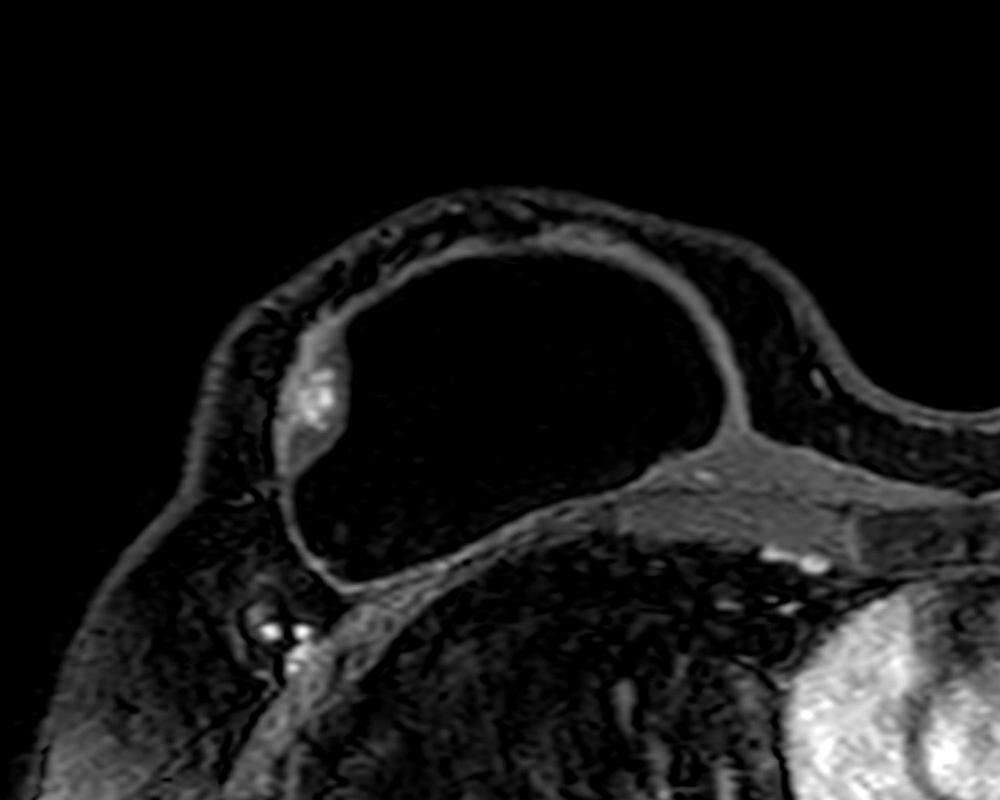 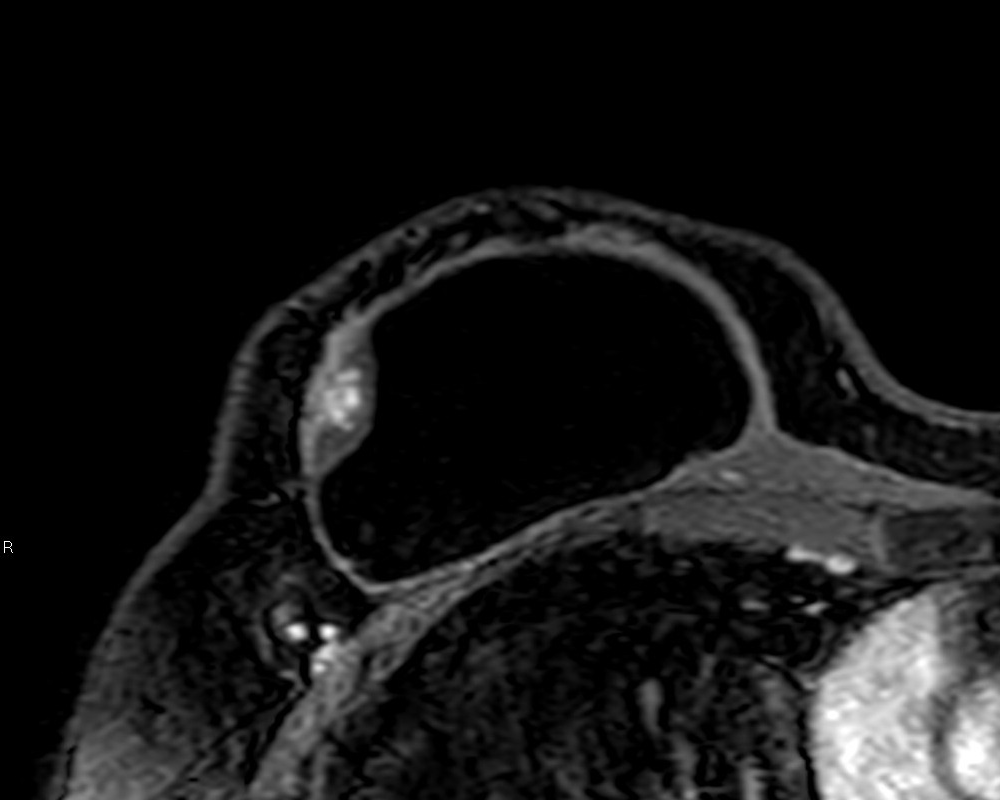 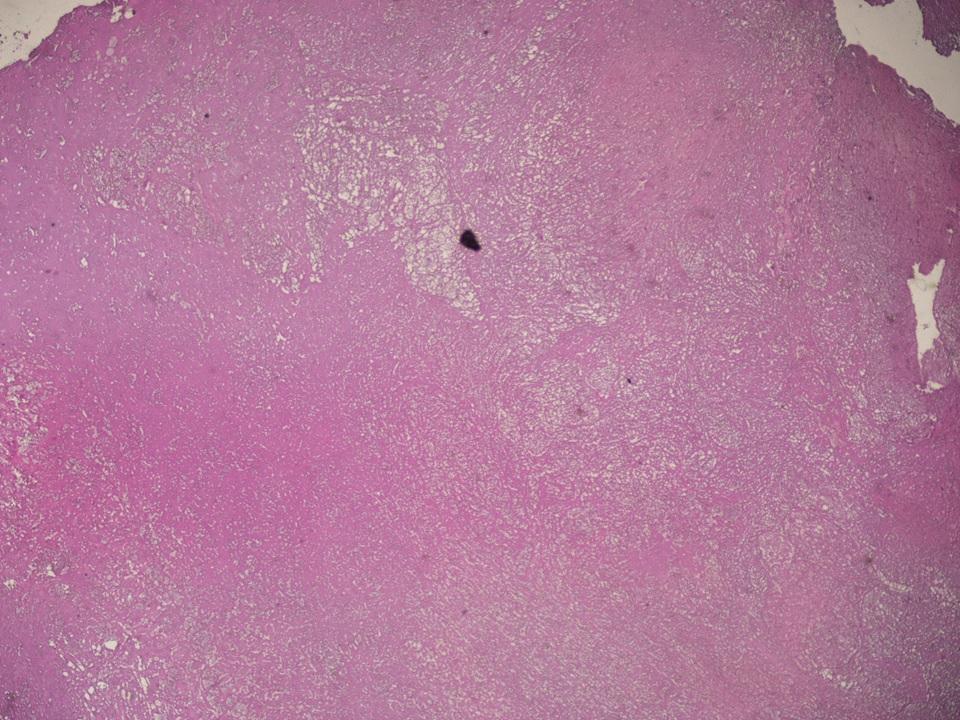 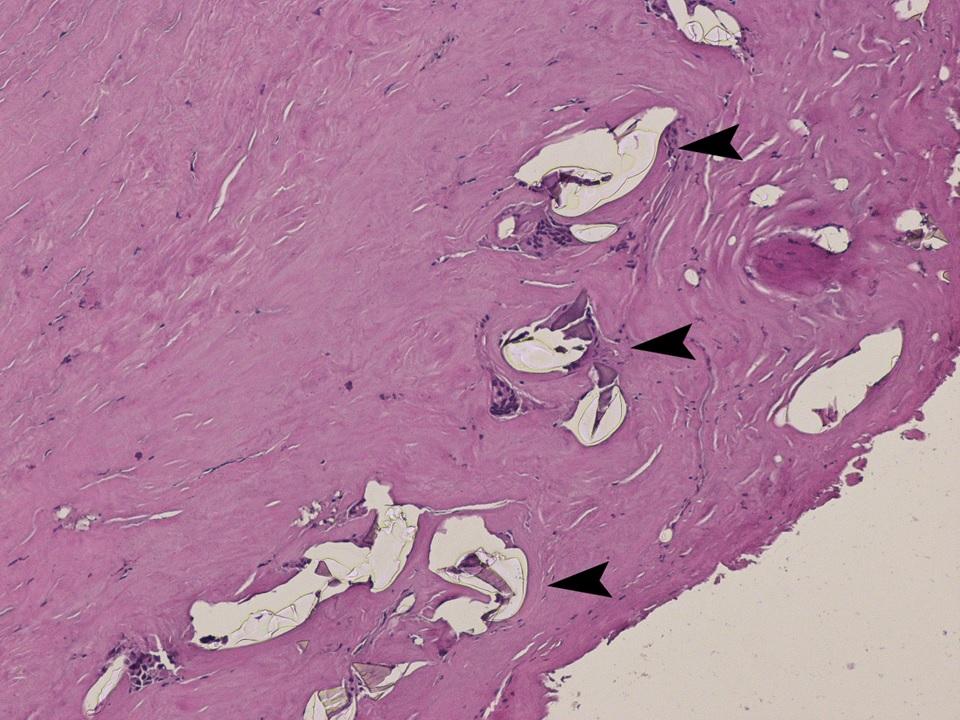