Role of imaging in calciphylaxis diagnosis

An 80-year-old female patient with mild chronic renal disease and long-standing primary hyperparathyroidism with hypercalcemia. She had a history of multiple visits to the emergency department during the last six months due to progressive deterioration of long-standing ulcers in lower as well as upper extremities. Lesions showed no response to diuretic and antibiotic treatment.

Figure 1a. Macroscopic view of one of the long-standing ulcers in left tight.

Figure 1b. Macroscopic view of one of the long-standing ulcers in right leg.

Figure2a. Left elbow radiography in lateral projection was obtained using digital tomosynthesis and C-image for a better depiction of soft tissues. Vascular calcifications are noticed in both radial and cubital artery as well as in multiple small caliber arteries spread throughout the subcutaneous tissue and soft tissues.

It is thought to be a complex disease with multiple etiological factors and is in most cases associated with end-stage renal disease and hemodialysis, though cases have been reported in patients without renal function impairment.  [2,4] Additional risk factors include female gender, Caucasian ethnicity, warfarin treatment, obesity, diabetes and an altered calcium and phosphorus metabolism. [2]

Painful indurated skin lesions are the key clinical sign.  [1,3,4] These vary from early-stage erythema, subcutaneous indurated plaques to end-stage non-healing skin ulcerations. Secondary infection of the lesions is a potential cause of sepsis. [1]

Pathophysiology of the disease is defined by ischemic necrosis of the skin. Dysregulation in the calcium, phosphate and parathyroid hormone levels leads to vascular calcifications in small caliber arteries, which typically occurs in the intimal and medial layers of the vessel wall. This results in endothelial dysfunction, inflammatory changes and finally thrombotic occlusion.  [1,3]

Skin is by far the most commonly affected organ, but systemic affection is also possible. [1]

The role of radiology in the diagnosis is not well established. Different imaging modalities can detect extraosseous calcium deposition.  [2,3,4] Mammography can detect calcification in arteries as small as 0,13mm in calibre and provides a better resolution than conventional X-Ray or CT scan.  [2] Calcification of small arterioles in a netlike pattern have been described as the key imaging feature and it is highly suggestive of the diagnosis in symptomatic patients  [2,3,4]

Nuclear medicine techniques such as bone scintigraphy using Tc99 have a high sensitivity in detection of extraosseous calcifications and can assess both extent as well as presence of active disease. [4,5]

There is no effective treatment for calciphylaxis. Early diagnosis followed by normalizing of calcium and phosphate blood levels are the key for the management of the disease. Symptomatic treatment for pain and secondary infection are also important. [1]

Mortality is very high even if diagnosed in early stages, with an overall estimated mortality rate of 60-80%. [1,3]

Patient consent document could not be obtained because the patient is deceased, but all the personal data have been removed or changed to ensure their anonymity 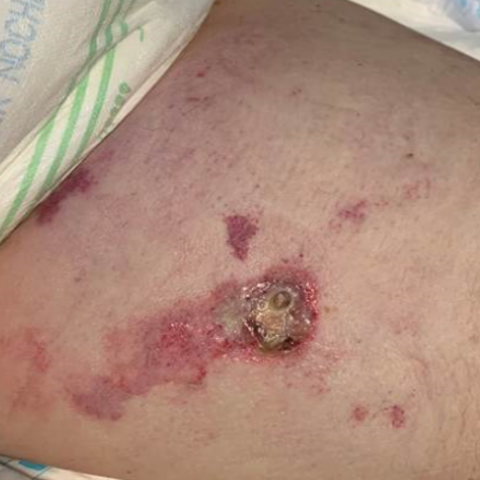 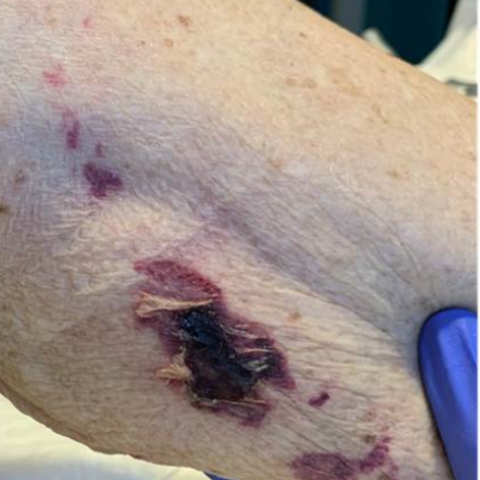 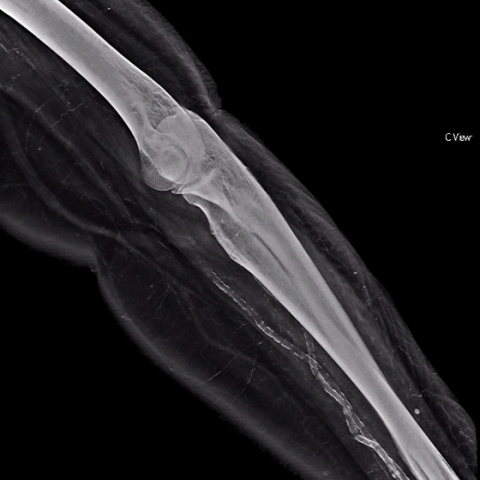 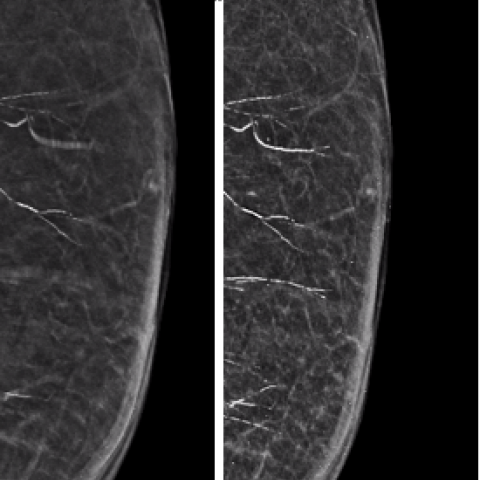 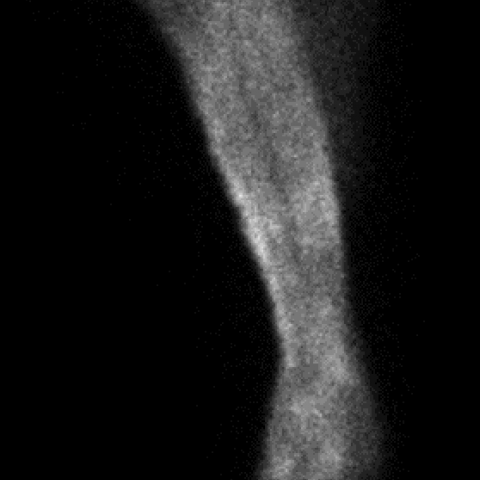 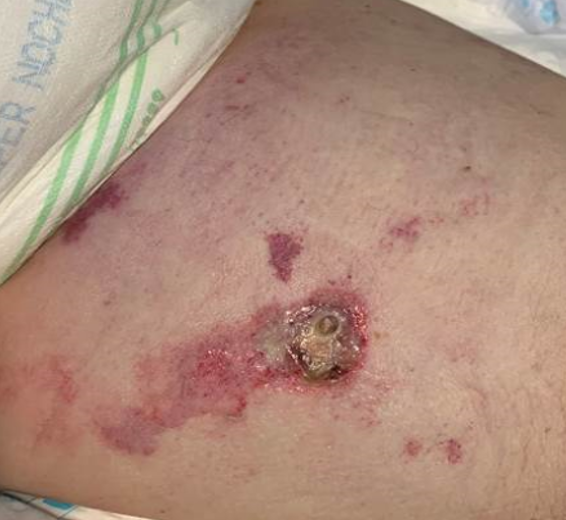 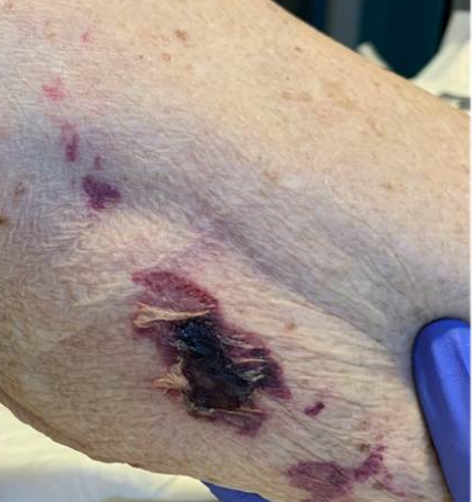 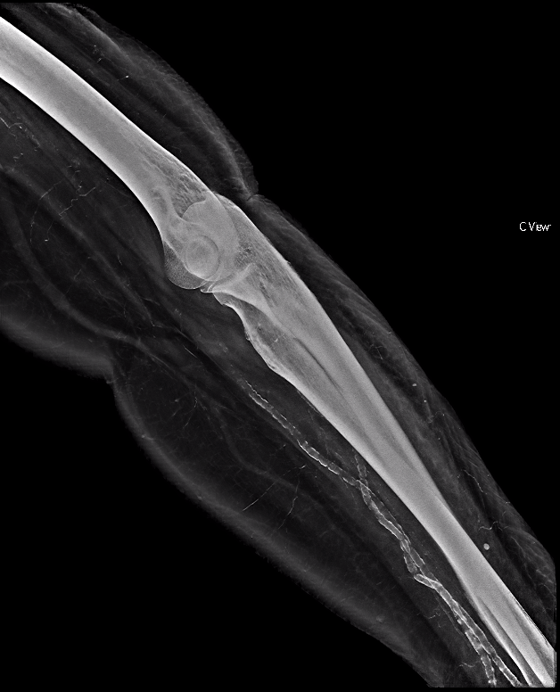 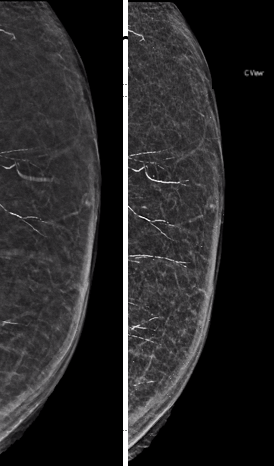 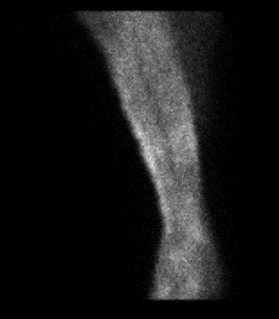