82 year-old male patient with a history of hypertension and arthrosis, presented with back pain.  An ambulatory spinal MRI showed lumbar degenerative disc disease and incidentally an aneurysmatic dilatation of the abdominal aorta of 5 cm.
One week later the patient referred an acute onset of abdominal pain with dorsal irradiation together with pain and palsy of the lower extremities and hemodynamical instability.

A CT angiography performed in the ER department showed:

The main diagnosis was acute Leriche syndrome secondary to thrombosis of the false lumen in a type B aortic dissection.

Reviewing the literature, we did not find any similar case where a thrombosed false lumen in an aortic dissection was causing an aortoiliac occlusive disease. [1]

More than one-third of patients with aortic dissection show symptoms and signs indicative of systemic involvement. [2]

Ischemic of the visceral circulation is the main prognostic factor in acute type B dissection. In this case, the celiac trunk, mesenteric and renal arteries were patent, without signs or symptoms of abdominal ischemia, and a successful revascularisation was possible.

Although the main cause of Leriche syndrome is atherosclerosis, especially when an acute onset as this case, other occlusive causes should be taken into account.

CT is the gold standard imaging technique for immediate diagnosis of acute aortic diseases, allowing a prompt treatment and improved outcome of these life-threatening conditions. [3]

The protocol should include non-enhanced and enhanced CT in arterial and venous phases.

Our CT showed a thoracic aorta aneurysm with an inner thrombus and contrast extravasation in the centre, suggestive of ulceration versus inner bleeding (image 1; blue arrow).

At the distal end of this aneurysm, an intimal disruption of 1,95cm2 was seen (green arrow in figure 2) that extended until the external iliac arteries causing a type B aortic dissection, associated to ascendent thrombosis of the false lumen from the iliac (green star) to the proximal neck of the infrarrenal abdominal aortic aneurysm (image 3; yellow arrow).

Compressive effect of the thrombosed false lumen caused aortoiliac occlusion. A late staining of the iliac arteries could be seen (image 4), with re permeabilisation through the deep inferior epigastric and median sacral arteries.

An emergent surgery of axilo-bifemoral bypass was performed in order to revascularize the inferior extremities, with successful outcome (image 6; red arrow indicates revascularization of common and external iliac arteries after treatment) compared to reconstruction pre-treatment (figure 5). The patient is now asymptomatic.

Extension of a type B dissection into the iliac or femoral arteries has implications for management, especially when percutaneous intervention is being considered. In our case this option was not possible since there was a thrombosis of the false lumen so surgical bypass was preferred. [1][2]

Aortic dissection is the most common acute emergency condition of the aorta and often has a fatal outcome. Imaging techniques are essential for a correct emergent approach. 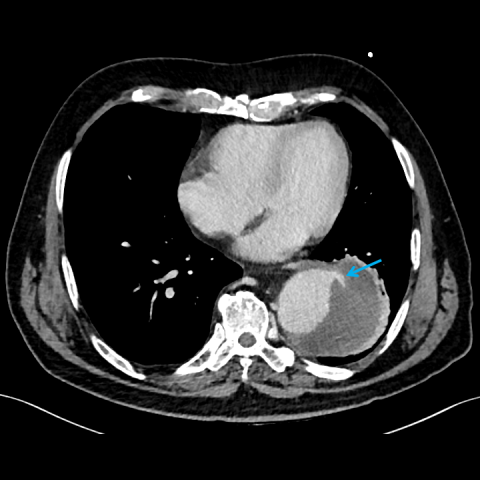 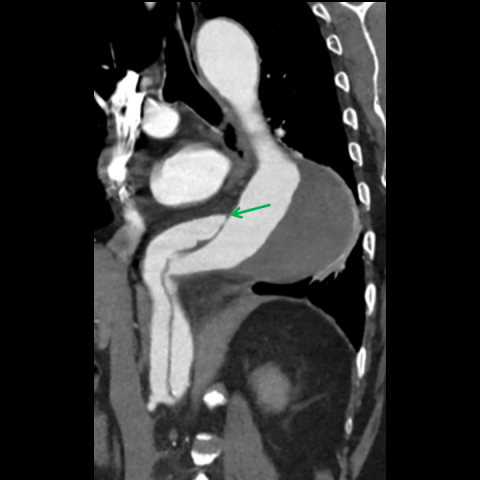 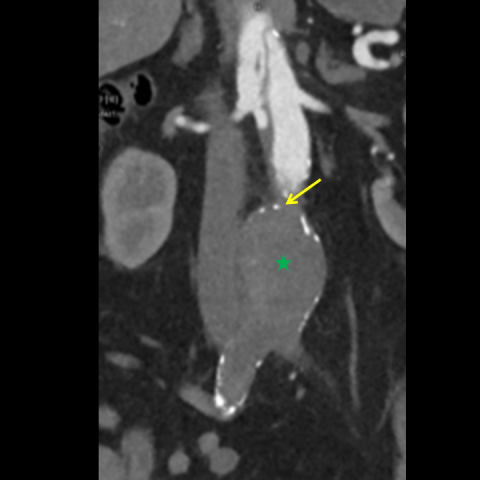 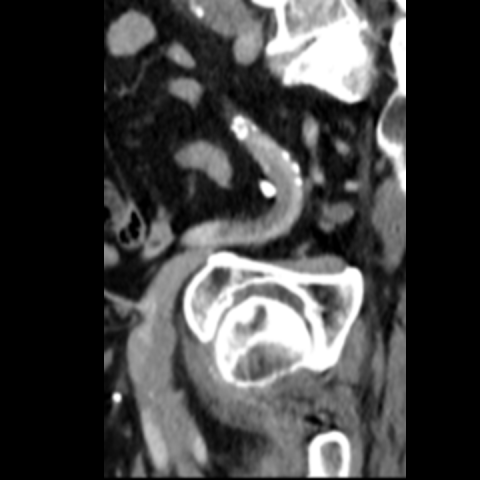 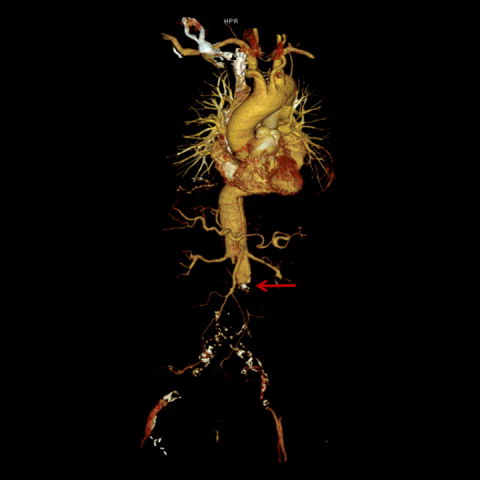 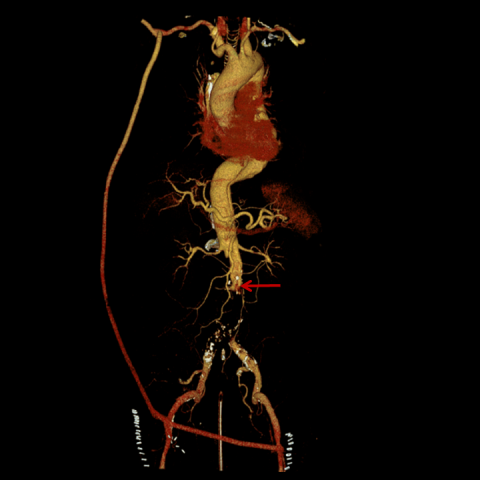 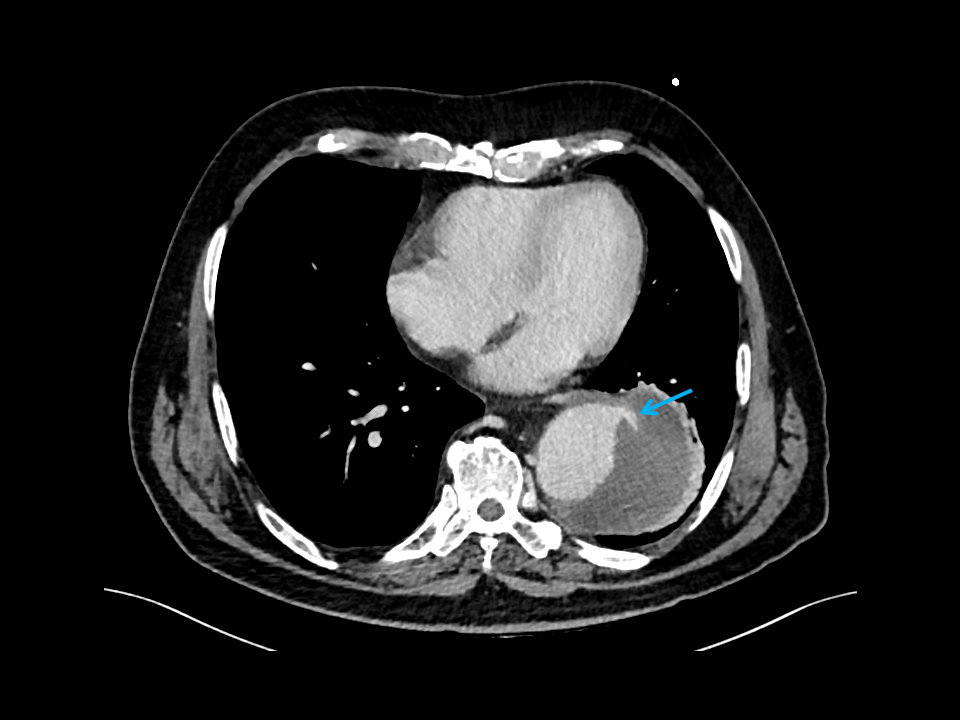 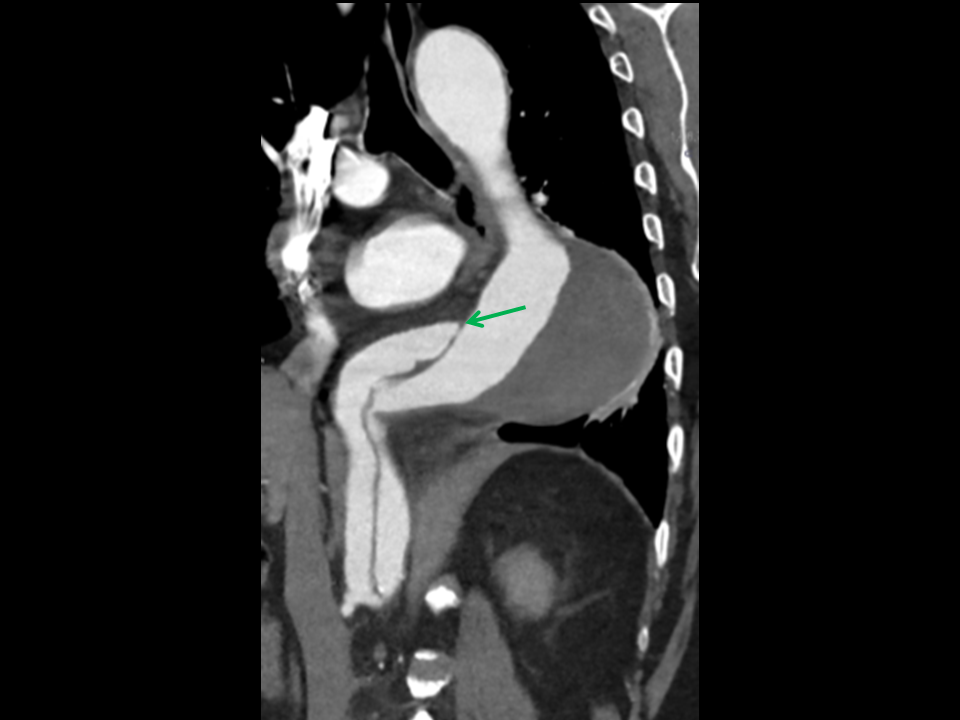 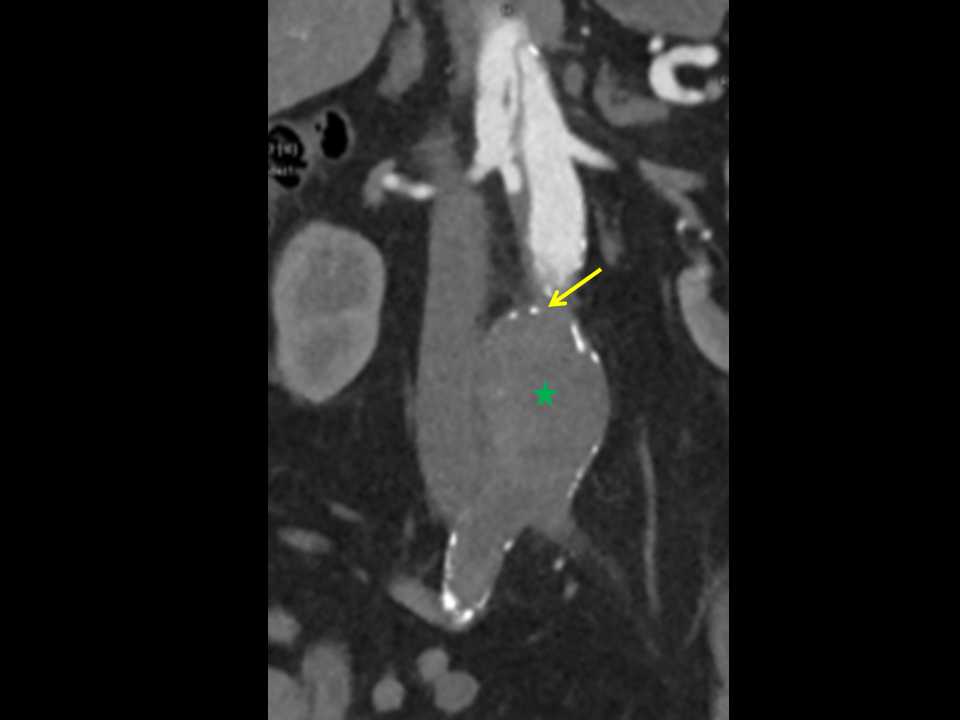 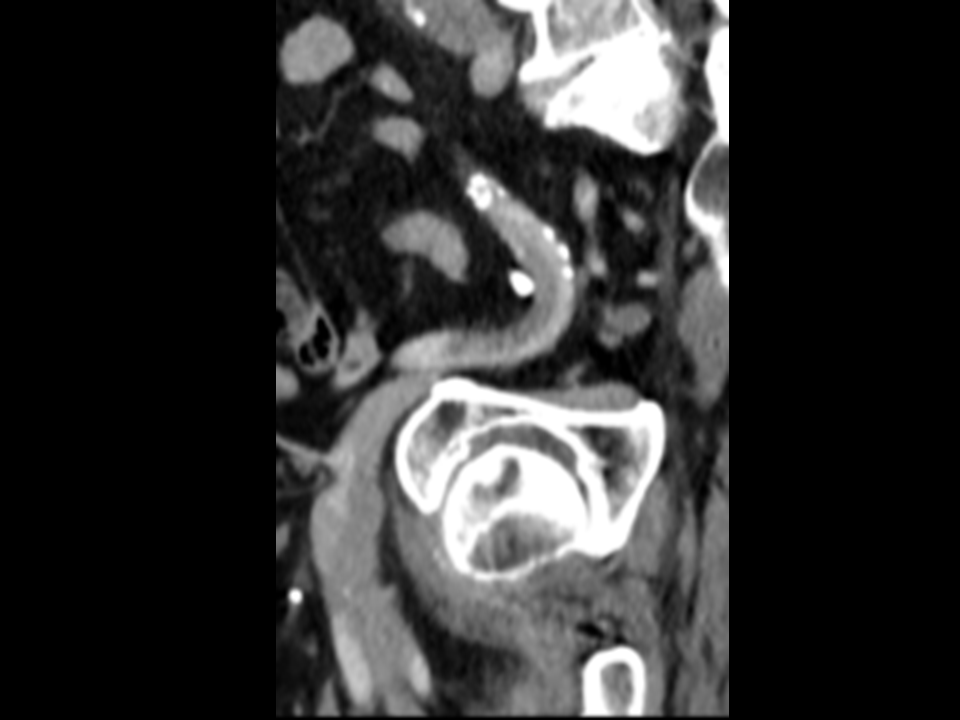 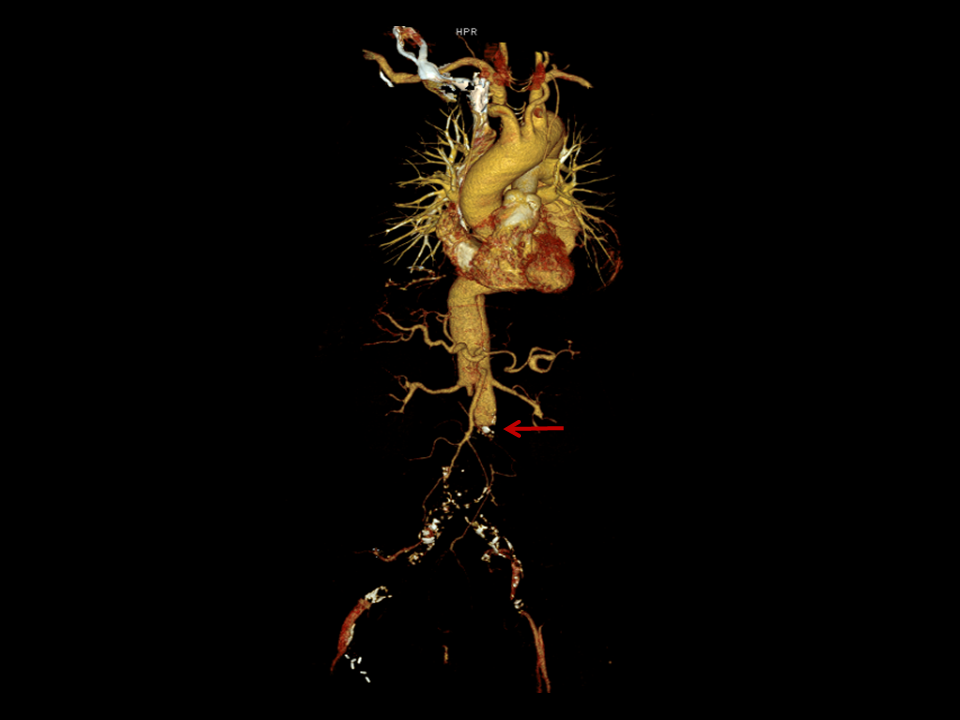 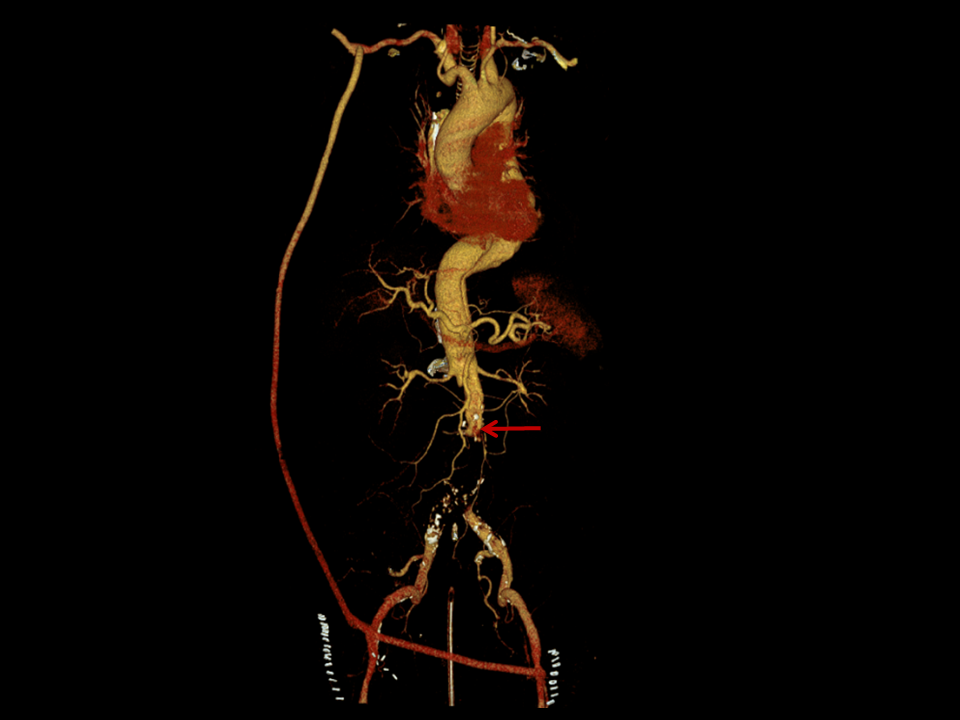