A 48-year-old woman presented with left-sided pelvic pain gradually increasing in intensity over the past 12 hours. She was premenopausal with an anamnestic history of surgical partial cystic ovarian resection.

Multilocular peritoneal inclusion cysts (MPICs), also called benign multicystic peritoneal mesothelioma, inflammatory cysts of the peritoneum, postoperative peritoneal cysts, or benign papillary peritoneal cystosis, occur almost exclusively in premenopausal women with a history of abdominal or pelvic surgery, trauma, pelvic inflammatory disease or endometriosis that leads to the development of adhesions within the abdomen and pelvis. These progressively collect the fluid normally produced during ovarian functional phases or inflammatory exudates derived from peritoneal reactivity until a complex pelvic cystic mass develops [1-4]. A common clinical presentation is a progressive lower-abdominal and pelvic pain or a palpable mass [4]. Due to their rarity and non-specific clinical signs, the pre-operative diagnosis of MIPCs is challenging. Although the utility of ultrasound in diagnosing MPICs has been reported, as it can reveal multiple septa and anechoic cystic pelvic collections [5], CECT and MRI may provide more suggestive findings in detection, characterization, and differential diagnosis of MIPCs with the aim of providing an appropriate management work-up.

CECT of an MPIC usually demonstrates a low-density, thin-walled, multi-loculated, multi-cystic mass, providing accurate information about the location and extent of the mass in the pelvis; however, CECT is limited in that it cannot better define the fluid content and the potential involvement of the adnexes [5]. On MRI, an MPIC appears as an irregular mass with low signal intensity on T1-weighted images, and due to its multi-cystic serous content appears bright on the corresponding T2-weighted images, encircling a normal-appearing ovary clearly separate from the cystic locules, without its own walls, internal structure, papillary projection (vegetation) or solid vascularized areas on dynamic phases [5].

Ancillary findings to support the diagnosis also include the lack of metastasis elsewhere, and lymphadenopathy within the abdomen and pelvis as well.

Based on these imaging findings in the absence of adnexal involvement, as much better evidenced on MRI, in a premenopausal female with history of previous pelvic surgery, MIPCs is the most suggestive diagnosis among the options raised in the differential diagnosis. 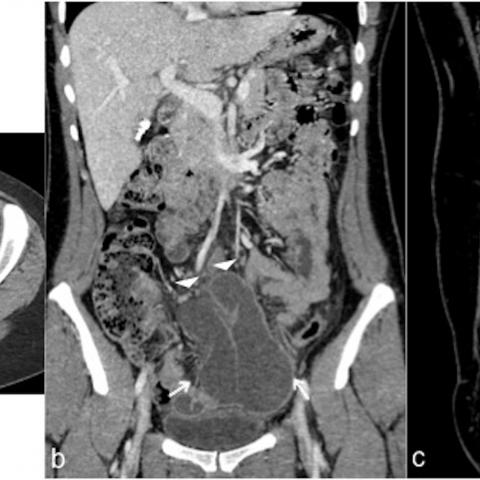 Multiplanar axial (a), coronal (b) and sagittal contrast-enhanced CT view show a well-defined, low-attenuation cystic mass (arrows; a, b, c) with thick enhancing walls and internal septa surrounds to pelvic spaces and extending cranially to the umbilical region (arrowheads; b, c) with an apparent spread from adnexa. B: bladder.
Figure 2 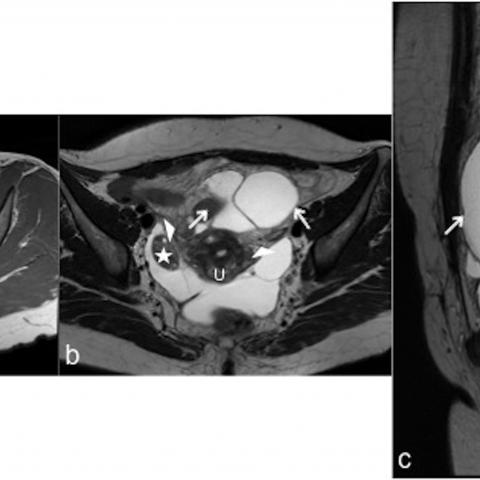 Axial T1w (a), T2w (b), and sagittal T2w (c) MRI show a large, well-defined multilocular cystic pelvic mass (arrows). Note several thin internal septa, radiating from the ovary, representing pelvic adhesions. The septa radiate from the ovary (star; a b) with a classic "spider in web" appearance (arrowheads; b). B: bladder. U: uterus.
Figure 3 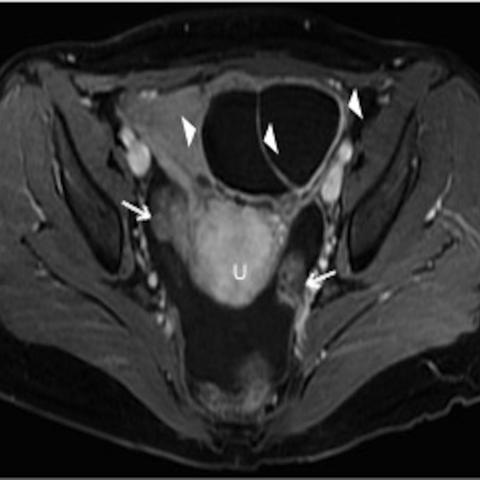 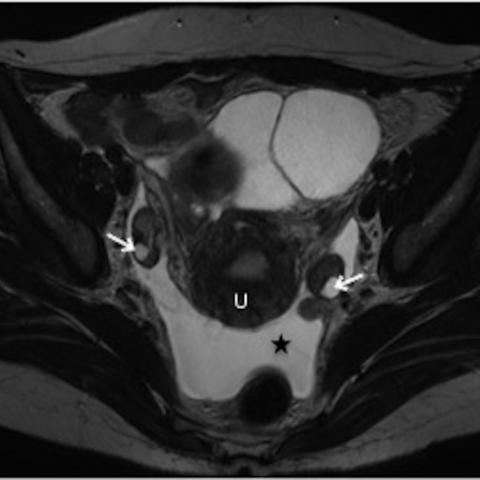 Multiplanar axial (a), coronal (b) and sagittal contrast-enhanced CT view show a well-defined, low-attenuation cystic mass (arrows; a, b, c) with thick enhancing walls and internal septa surrounds to pelvic spaces and extending cranially to the umbilical region (arrowheads; b, c) with an apparent spread from adnexa. B: bladder.
© Department of General and Emergency Radiology, “Antonio Cardarelli” Hospital, Naples, Italy 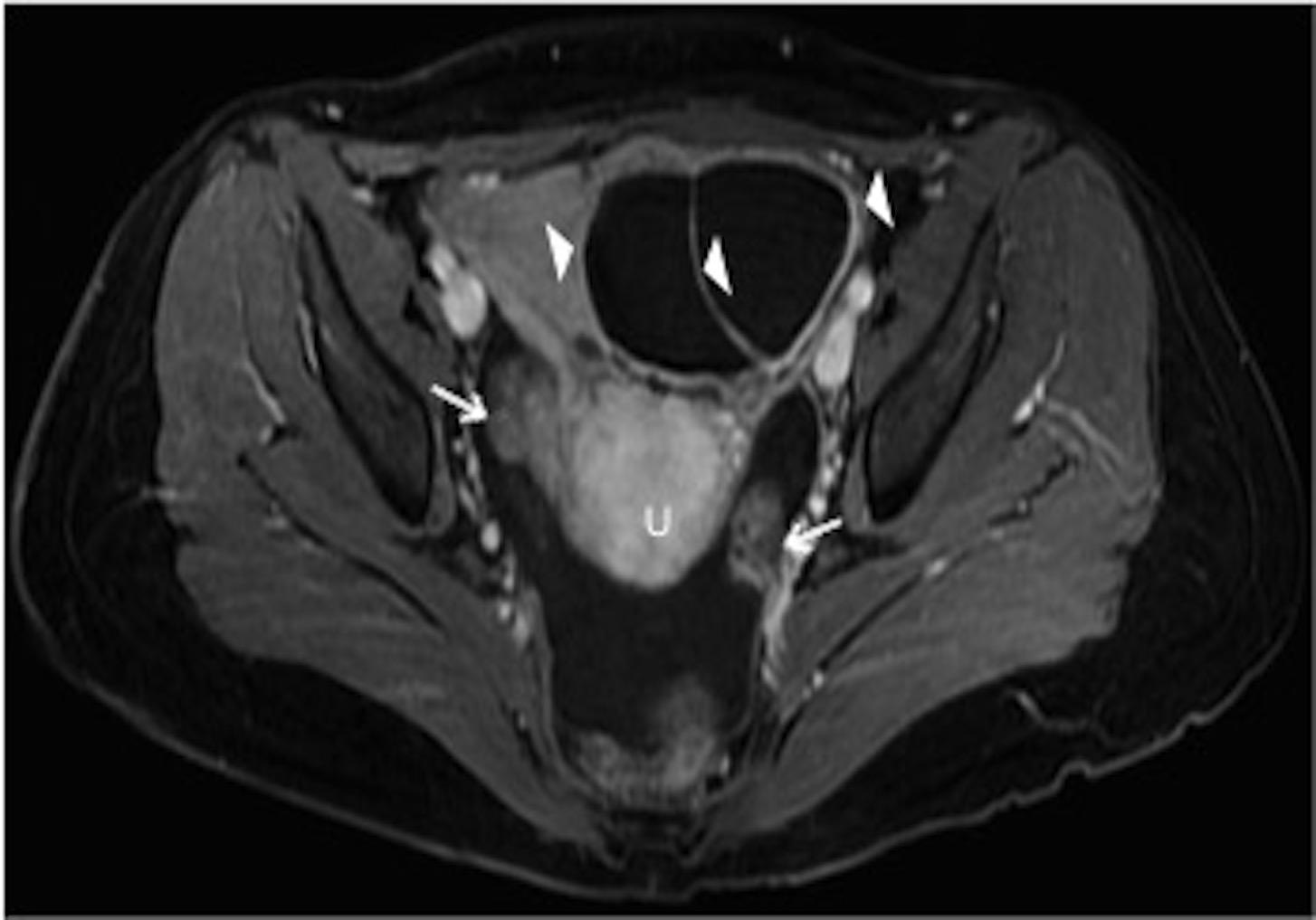 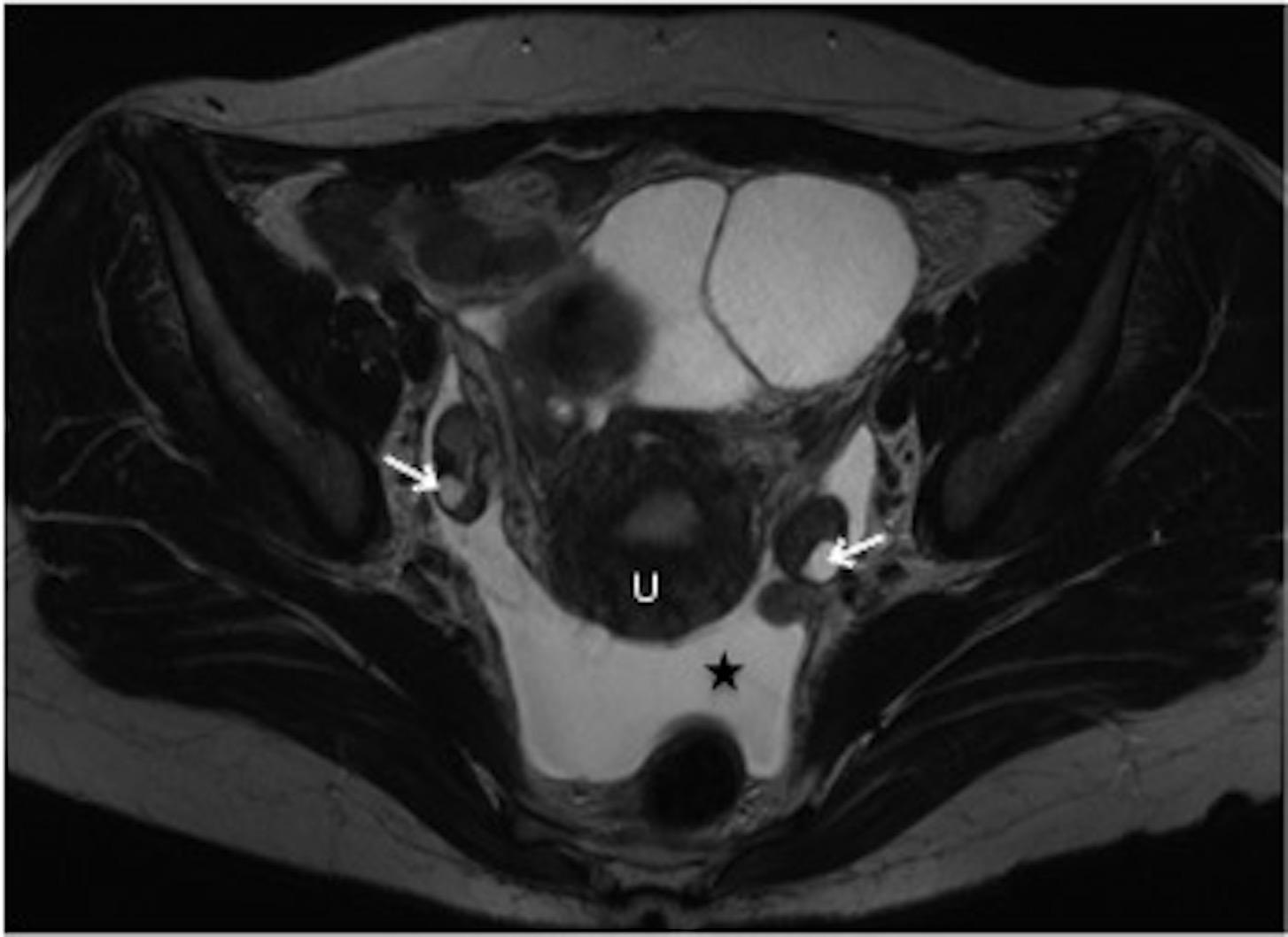